400 Miles in Their Shoes

Anthropology Ph.D. candidate Anna Antoniou circumnavigated Cyprus on foot to take steps toward understanding what brings the divided island together. 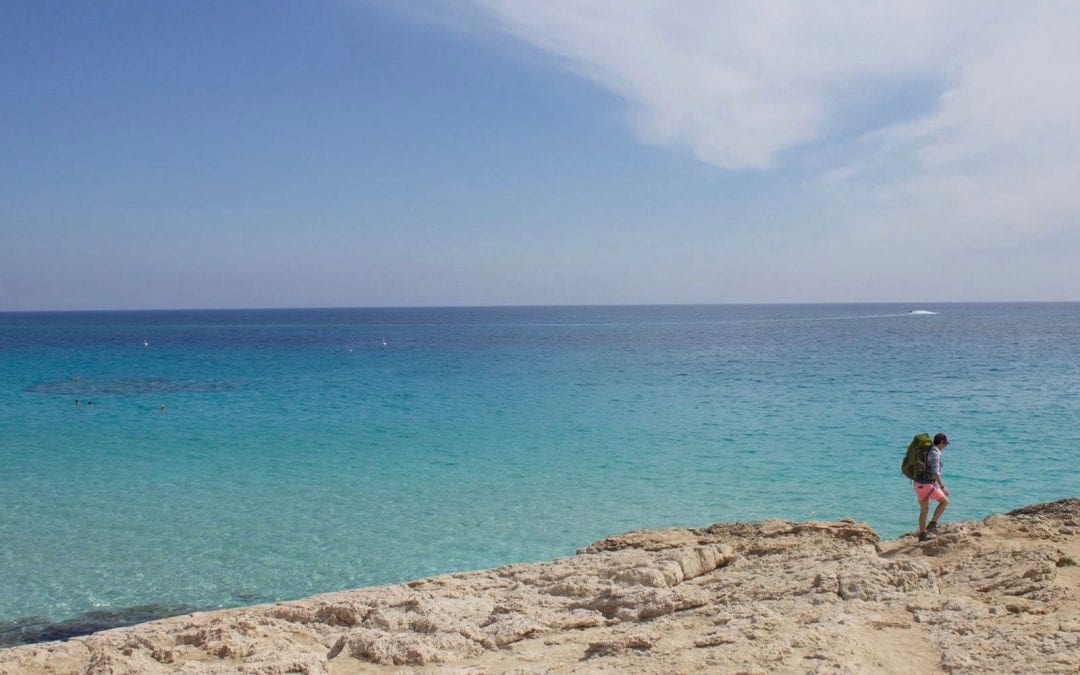 On the eastern coast of the island of Cyprus lies what may well be the world’s most beautiful ghost town. Home to an idyllic expanse of beach and shimmering Mediterranean views, the city of Varosha was once Cyprus’s greatest tourist attraction, where hoteliers and restaurateurs catered to the likes of Elizabeth Taylor, Frank Sinatra, and Marilyn Monroe. That changed, however, when the Turkish military invaded Cyprus in July 1974. Turkish forces displaced Varosha’s inhabitants and cordoned off the entire area as a bargaining chip in their settlement negotiations. It remains unchanged more than 40 years later, as passers-by snap discreet photos, and water laps at the rusting barbed wire separating Varosha’s stunning white sand and crumbling high-rises from tourists and the people who once called it home.

The situation in Varosha, says anthropology Ph.D. candidate Anna Antoniou (M.A. ’14), is emblematic of that of Cyprus itself: a place held in limbo. The southern half of the island is an independent country with Greek ethnic ties, while the northern half remains a Turkish occupied territory with Turkish ethnic ties. A 112-mile buffer zone—involving the longest peacekeeping mission in U.N. history—runs between them. The island’s capital, Nicosia, is the only divided capital in the world. Yet despite the political differences that split the island, Antoniou set out there with one question in mind: What unites it? 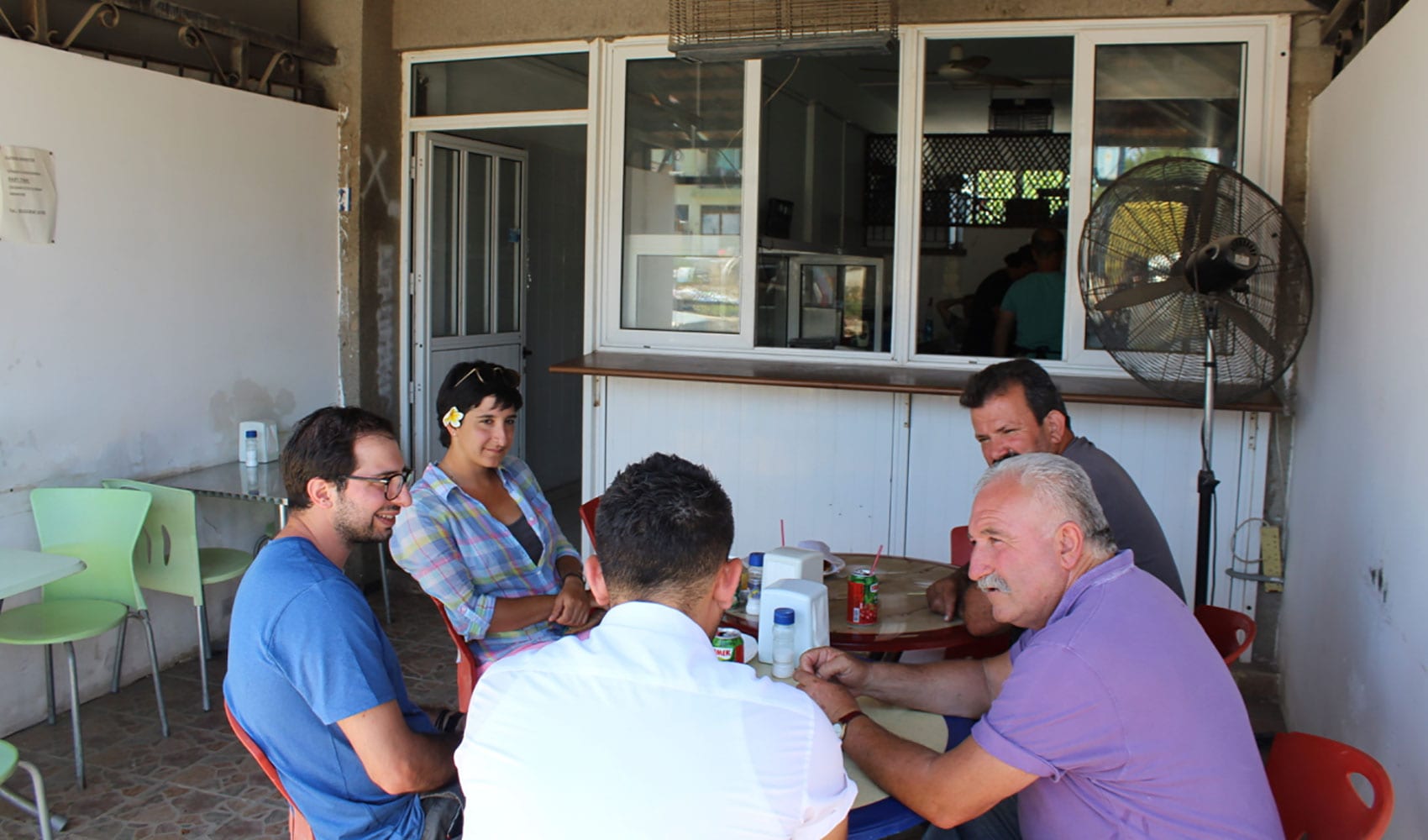 Antoniou and her team chat with locals at a restaurant in Kalkanli in the Turkish-occupied region of Cypress.

“Instead of looking at Cyprus as two separate places with two identities, we wanted to look at what it meant to be Cypriot as a whole and talk more about similarities than differences,” says Antoniou, who received a National Geographic Young Explorers Grant for what would turn out to be a 400-mile trek with her brother and god-brother along the island’s coast and through its interior. “It was really striking that almost everybody we talked to agreed that they felt like they were the same community. For the most part, everybody wanted to be unified and wanted it to be one island again.”

“You Can Sleep in My Watermelon Field”

While her doctoral work focuses on Native Americans of the Washington coast, Antoniou was drawn to the subject of Cyprus because her father is from there and she identifies as a Cypriot American. Her primary field of study may not have overlapped with this project, but her scholarship played a role in how she wanted to undertake it.

“I am a Ph.D. candidate in anthropology, but I focus on the archaeology sub-field,” she says. “I use some of these methods that are typical of archeology to look at contemporary issues, and walking survey is a huge part of archeology. I decided to walk because the issue is so tied up with the landscape, and about land, and about occupation of land, that I thought that walking would give us better insights into that, and it really did.”

The group averaged seven miles per day over eight weeks, but would sometimes more than double that to allow time in urban areas where they wanted to talk to more people. They carried all of their gear with them, including computer, photography, and video equipment so Antoniou could post stories and images from their experiences on the project’s website as they progressed. And they camped—on beaches, in fields, and pretty much wherever they could. Once they thought they had found a secluded cove only to realize that the nearby lighthouse was actually a dance club that kept them up well into the night. Another time, a woman steered them away from an area of soft grass on her property in favor of what she considered a safer alternative given the island’s many poisonous snakes: her fenced watermelon field.

“The funny part was there was about a foot between the ground and where the mesh of the fence started, so it wasn’t going to help with the snakes at all,” Antoniou says. “But, of course, we were happy to sleep in the watermelon patch.”

“We Are the Same”

One of the hardest things for someone used to meticulously planning days of fieldwork was learning to go on the fly and make space for the accidental interactions that travelling on foot made possible. The group met and talked with locals on the road. They were invited into people’s homes. They sat down at the dinner table and squared off on the backgammon board. It was through these conversations, Antoniou says, that people felt most at ease to share their views about life in Cyprus. And what they had to say was strikingly similar.

Antoniou wrote in her report for National Geographic: “Although they do not share a language, a religion, and now a territory, Greek Cypriots and Turkish Cypriots believe they possess a single ethnic and cultural identity, with ‘Greek’ and ‘Turkish’ being a secondary affiliation. To Panikos Loizou, Greek and Turkish Cypriots have a stronger bond with each other than they do with their mainland counterparts. ‘We are the same people,’ he said. Kemal Değirmencioğlu, when asked if he identified as Turkish Cypriot, said, ‘Yes, but first I consider myself Cypriot.’ 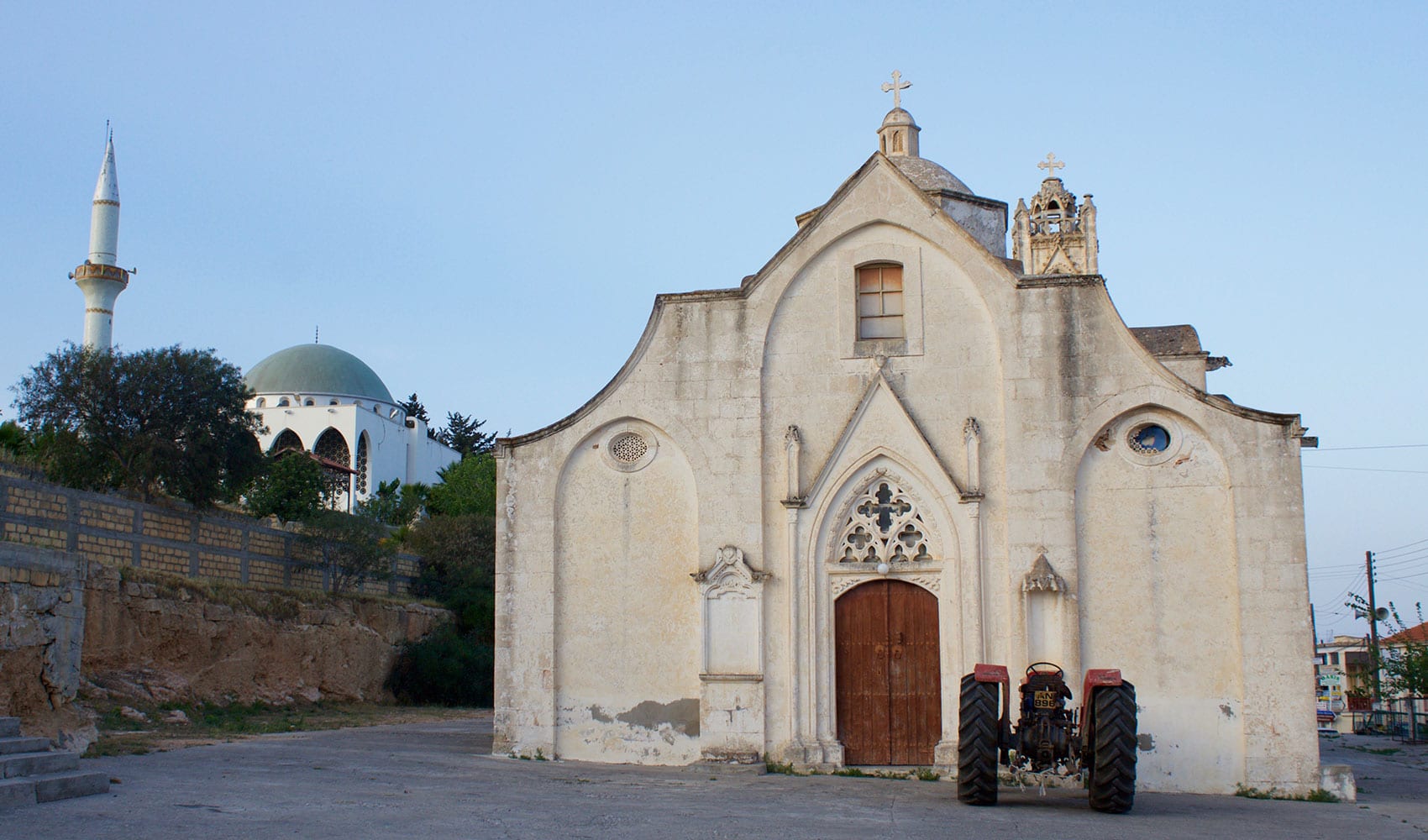 An older Greek Orthodox church sits near a newer Muslim mosque in the town of Rizokarpaso, one of a few locales where Greek and Turkish Cypriots live amongst each other.

Antoniou says that this widespread sense of unity was one of the trip’s most profound revelations. Another was her excitement at being able to share what she’d learned with a larger audience.

“I think before this project, I had been taking a viewpoint to research that was more within academia,” she says. “I really liked translating for the broader public and getting people excited about these things that I’m excited about. And I think moving forward I want this to be part of the direction I go into: I want it to be more outward facing and more creative in that way.”

See More Stories and Images on the Project Site: Circumnavigating [CY] on Foot