A History of Activism

In 1985, the Minority Organization of Rackham was formed. Now called Students of Color of Rackham (SCOR), the group continues to expand support and advocacy for the academic, professional, and social needs of graduate students of color. 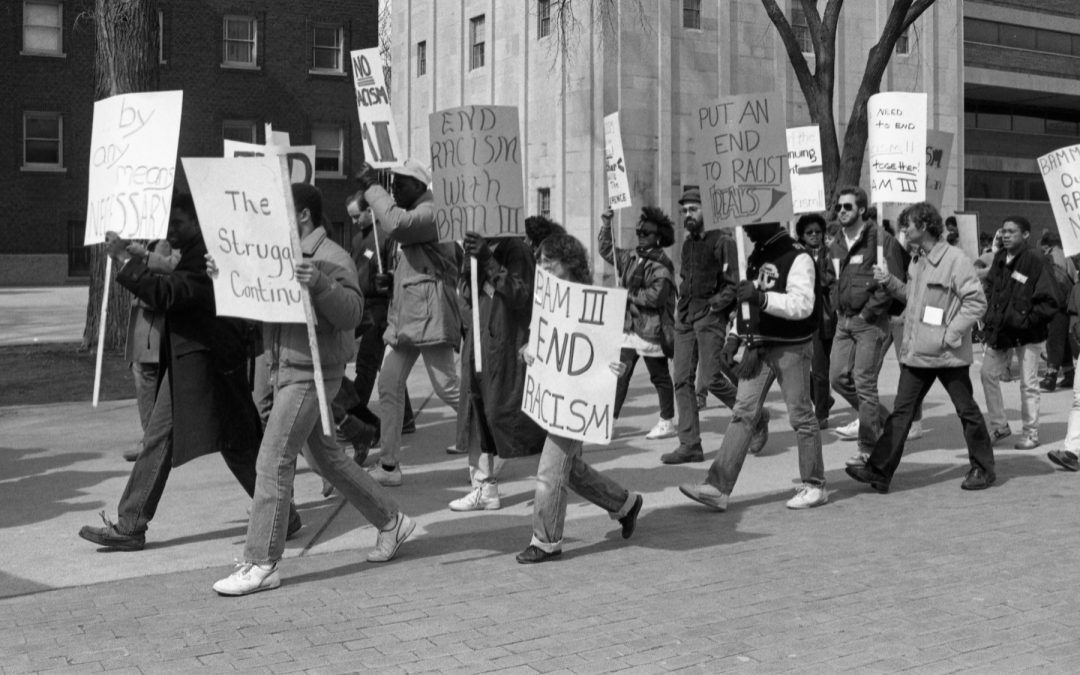 In the fall of 1985, Robert Sellers came to the University of Michigan. Long before becoming U-M’s chief diversity officer and the vice provost for equity and inclusion, Sellers arrived on campus as a new graduate student pursuing a Ph.D. in personality psychology. Far from both his native Cincinnati and Washington, D.C., where he studied at Howard University, Sellers, like many graduate students before and after him, sought out a sense of community.

Sellers got his chance to start making those connections early in his first semester, when Rackham organized a social event for first- and second-year doctoral students of color in the LSA Building. As the event died down, Sellers and a group of 15 or 20 other students remained, talking. Their conversation turned toward how they could continue to help graduate students of color at U-M come together, ultimately settling on the need for a new student organization.

“It was a great group of folks who came together and decided we needed this organization,” Sellers says. “While there were a lot of professional and academic discipline organizations for black students at Michigan at the time, there wasn’t an umbrella organization for black graduate students that spanned across the university.”

One of the first struggles of the nascent organization was its name, and the identity that name would convey. While the vast majority of U-M students of color at the time were African American, the university also counted Latinx, Native American, Asian, and others among its student population. The group debated several different names that would indicate a spirit of greater inclusivity, including Students of Color of Rackham, but the acronym—SOCOR—was found unwieldy. Ultimately, they settled on calling themselves the Minority Organization of Rackham—MOR.

While founded by Sellers and his colleagues, the creation of MOR did not occur in a vacuum. The Black Action Movement (BAM) protests of 1970 and 1975 were still fresh in the memories of many around the university, events which twice saw hundreds of students mobilize to demand better representation of and support for minority students.

The ramifications were numerous, but one of particular importance came in the settlement of the 1970 BAM protest. The University of Michigan declared a goal of reaching 10 percent black enrollment, matching the black percentage of the Michigan population at the time. Despite its goal, however, that number only managed to hover between about five and eight percent in the years that followed. Sellers hoped the newly founded MOR would be able to contribute to bringing that number up.

Their mission to bring more students of color to graduate school took them outside the boundaries of U-M, too. Building on an approach pioneered by the U-M chapter of the Black Student Psychological Association, MOR—sometimes in collaboration with Rackham and sometimes on its own—undertook recruitment trips to historically black colleges and universities around the country. 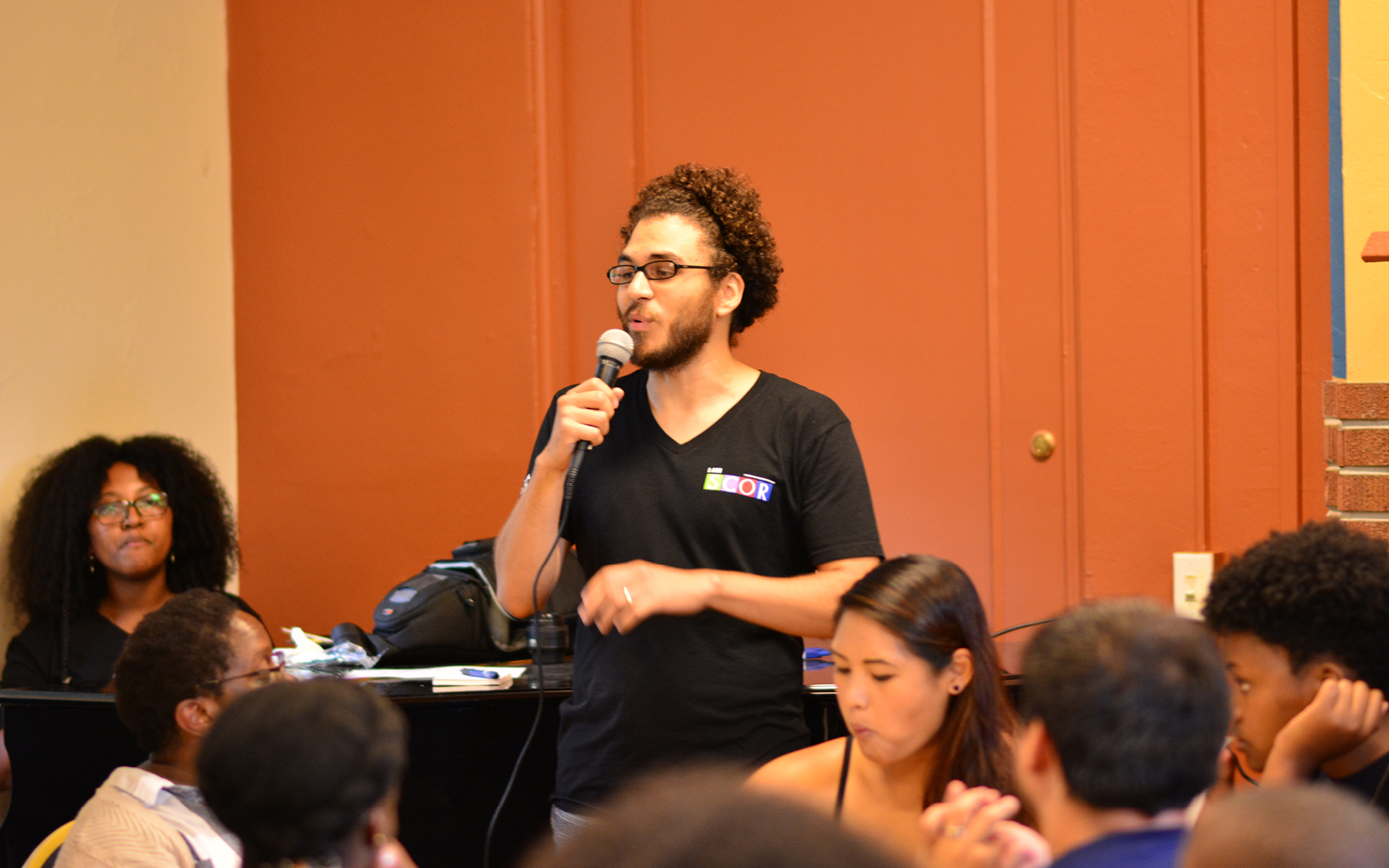 Since its founding, MOR, later renamed SCOR, sought to provide a supportive community for students of color at the University of Michigan.

Beyond attracting new students of color, MOR also sought to give them a place to feel at home. They held social functions including parties and receptions, as well as family picnics and a monthly happy hour.

“When you’re working with graduate students, you’re dealing with people at different developmental ages,” Sellers says. “You’ve got people who are working full-time, people with families, people who have very different day-to-day realities from each other. So we were always trying to accommodate and meet a wide variety of needs.”

In 1987, a third BAM protest—which counted many MOR members among its participants—won additional commitments toward students of color from the university. This included the creation of the Office of Minority Affairs, which continues today as the Office of Academic Multicultural Initiatives, and the creation of the position of Vice Provost for Minority Affairs, now called the Vice Provost for Equity and Inclusion, which Sellers himself now occupies. The success of the third BAM protest also encouraged Sellers and the other members of MOR to pioneer new ways to elevate graduate students of color at a larger scale than before.

Two years later, MOR helped organize the first National Black Graduate Student Conference, which brought together graduate students of color from 25 universities across the nation. The students participated in presentations, roundtable discussions, and professional development workshops aimed at addressing the specific issues facing people of color. At the end of the conference, the creation of the National Black Graduate Student Association was proposed, with U-M doctoral student Todd Shaw named its first president. Both the association, which now has chapters at a number of institutions, and the conference continue today.

“One of the most important parts of graduate student training is having spaces where you’re being pushed with regard to your work, in regard to how you’re thinking about your work, and where you can get critiqued,” Sellers says. “One of the fundamental disadvantages of being a person of color in graduate school is figuring out whether the critique is real, or if it’s based on some perceptions of inherent inferiority. We need a place where we can get that critical feedback and be able to trust that it’s coming from a constructive space. That’s, I believe, a major part of what MOR could provide, through campus activities, through the national conference, and ultimately through the national association.”

From MOR to SCOR

While the ensuing years have brought many changes both to the organization and the campus, that core mission has remained.

In 1992, two years after Sellers completed his studies, MOR took on a new identity. Or rather, it returned to an old one. Dropping one letter from the acronym the original members of MOR rejected, it became the Students of Color of Rackham, or SCOR. Under that moniker, the organization continues its work of building a community for graduate students of color of all backgrounds at U-M.

Shanice Battle is a Ph.D. candidate in the School of Public Health studying the social factors that influence women’s mental health. When she first came to U-M, she hoped to join an organization like SCOR, though between relocating to Ann Arbor and the hectic nature of the first year of graduate school, she didn’t find it until her third year. Now, she just finished her term as SCOR’s president. 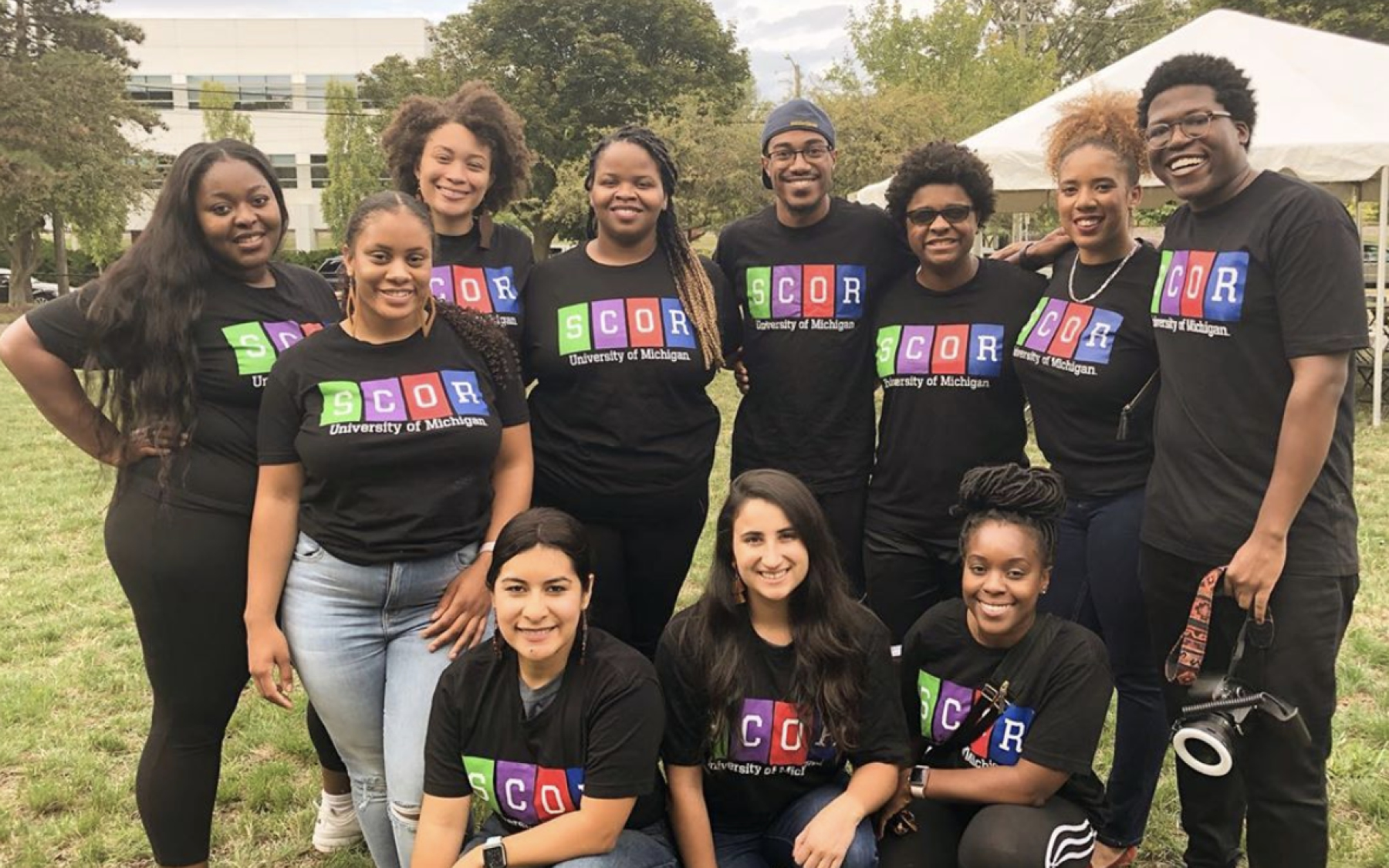 “I see SCOR as being a hub of leaders who come together to build community among students of color at U-M,” Battle says. “Our executive board consists of graduate students from across the university. Together, we create spaces for students to connect with each other and interface with Rackham faculty and the surrounding community.”

“Higher education can be an isolating place for students of color, and that can impact their academics as well as their mental wellbeing,” she says. “This is why it’s especially important for us to reach out to new students so they feel better coming to campus having already connected with a source of support.”

Building on that support to meet the changing needs of future graduate students is always on Battle’s mind. From a shifting of student interests to a changing political climate, SCOR’s role on campus continues to evolve. They now host an annual social justice symposium every winter semester—this year’s being March 31-April 4—and continually plan new and different social events to attract a diverse group of students.

Now, as a new wave of protests against systemic racism and police violence in the United States continues across the country, the support SCOR offers students of color at U-M, and particularly its Black students, has never been more important.

“SCOR’s history is uniquely tied to the generations-long fight for equity on campus for Black students, and its work is firmly rooted in those goals for society at large,” Battle says. “Our  engagement on campus seeks to contend with the ways Black students are impacted by existing policies, climate, and practices in graduate school and academia more broadly. Through our campus community dialogues and general body meetings, we are able to connect with Black students and understand more about how SCOR can collaborate with Rackham leadership to fill some of the gaps in support, opportunities, and resources.”

SCOR, Battle says, is indebted to Sellers and the other Black students who helped found it over three decades ago. Given the current struggles faced by this group, she sees the responsibility to develop initiatives specifically targeted at their needs.

“This will include initiating more action-oriented dialogue with leadership within Rackham and across its graduate programs,” Battle says. “I see SCOR’s role as an organization that represents all students of color on campus evolving in a way that addresses the needs of specific communities and doesn’t blend the needs of all students of color into one issue to address.

“SCOR is uniquely positioned as a Rackham organization with a history of activism and direct interaction with Rackham’s dean and the U-M president’s office. SCOR is firmly rooted in Rackham’s history, and it’s important for us to honor that history while expanding our support and advocacy for the academic, professional, and social needs of graduate students of color.”