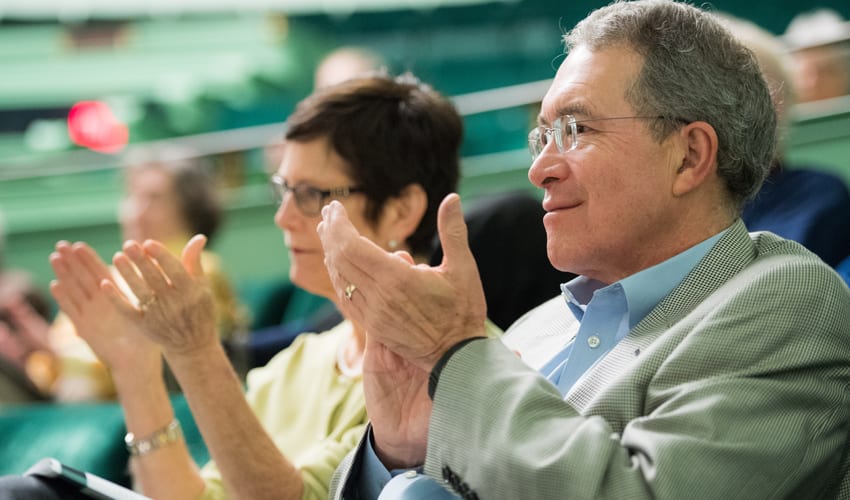 Where science went, so did Jeff Hansen, from a college campus to the newsroom and back again. With an undergraduate degree in Economics, a Ph.D. in Microbiology, and a career in journalism, his career path might seem nontraditional, but to him, it makes perfect sense.

After earning his bachelor’s degree from the University of Michigan in just three years, Jeff enrolled at Harvard Law School, but took a leave of absence after the first year to reevaluate what he truly wanted to do. “Michigan is a place where you can be confident in your decision to make a change,” he said of the transition. He dipped his toes into the world of science with six months of undergraduate science classes and work in a lab at the University of Michigan before applying and being accepted into Michigan’s microbiology doctoral program. While the studies of economics and microbiology hardly overlap, Jeff says his undergraduate LSA honors seminar classes provided valuable intellectual experiences that prepared him for his graduate career and what came after. As a graduate student, he interacted with researchers in other disciplines, including the medical field, which helped him understand jargon outside of his own area of study. Now, he encourages current graduate students to do the same, and to do it as much as they possibly can. “Social media makes facilitating those interactions much easier. You can learn so much from people in other disciplines. Talk to people, listen to people, share ideas.”

Jeff completed his doctoral program in 1978 and became a postdoctoral fellow at the University of Alabama at Birmingham (UAB). He followed that as a UAB assistant professor, but was later intrigued by the goal to write for Science Magazine. When he was told he first needed at least two years of newspaper experience, that sent him to his first journalism class, taught by the editor of the Birmingham News. He became fascinated by newspaper work. “It was like being in a research lab, but the lab is the world around you, and you’re traveling and talking to a variety of people.”

Jeff went on to spend 27 years at the Birmingham News, a thriving newspaper that published seven days a week. Following the economic crisis of 2008, nearly 75% of the newsroom was put out of a job in 2012, Jeff included, as the paper moved online. He did freelance work, and then was contacted with an opportunity to return to UAB. Jeff had a reputation for writing about science, so UAB, with its renowned biomedical research center, was a sweet option. Jeff serves as a research editor at UAB, where he combines his knowledge of science with his flair for writing of all kinds.

Jeff looks back fondly at his experiences as a U-M graduate student, whether it was getting snowed in the lab in Med Sci II for three days during the blizzard of ’78, cooking crayfish caught from the Huron River in the lab stove, or making breakthroughs in his research by isolating a group of plasmids in a way that was previously impossible. He remembers quite clearly what it was like to pursue an advanced degree on a limited budget. That’s why, when asked how alumni can help current students, he says simply, “Be generous. Whether it’s your time or money, give generously.” And give generously, he does. In 2016, after decades of increasingly impactful annual gifts to the University, Jeff and his wife, Kathy Britton, pledged $50,000 to establish an endowment at Rackham for need-based graduate student support. Previous gifts include those that were dispersed to students as summer awards.

Jeff also knows the importance of exploring any and all opportunities and embracing the variety of trajectories one’s career may take. Whether a student goes onto academia, industry, or business, there are many unique strengths that come with earning an advanced degree.

Looking back at his own winding road, Jeff hopes that current students can be confident even when they don’t feel it, because “life has a way with coming up with answers.”

“Keep making an effort and talking to people,” he says. “Change can happen in really rewarding and surprising ways.”