Fall has arrived in Michigan! It came in quickly this year, like a November gale blowing off the coast of one of the Great Lakes. Since fall is one of the shortest seasons in Michigan, the time to go out and enjoy the season is now! Very soon the leaves will be gone and the snow will be falling. Fall in Michigan means the cider mills are churning out fresh cider and warm donuts, apples can be found on the cheap in every supermarket, candy is discounted in preparation for Halloween, and everything has some pumpkin spice added to it. In other words, it’s a great time of year :D. If this is your first year in Michigan, here’s a brief timeline of fall weather:

Now that you know what to expect this fall, the question is which part of Michigan should you explore? My response is simple: say yah to da U.P. eh! Michigan’s Upper Peninsula (or U.P. for short) has a landscape and culture completely different than the rest of the state. And, no offense to Ann Arbor, the U.P. is the best part of the state. This destination provides some of the most beautiful countrysides in the nation and is home to Michigan’s only National Park, Isle Royale. In the fall, the vistas provided by the U.P. are even more breathtaking. However, if you do travel to the U.P. in the fall, make sure to go early because peak season for fall colors is 1-2 weeks earlier than downstate. 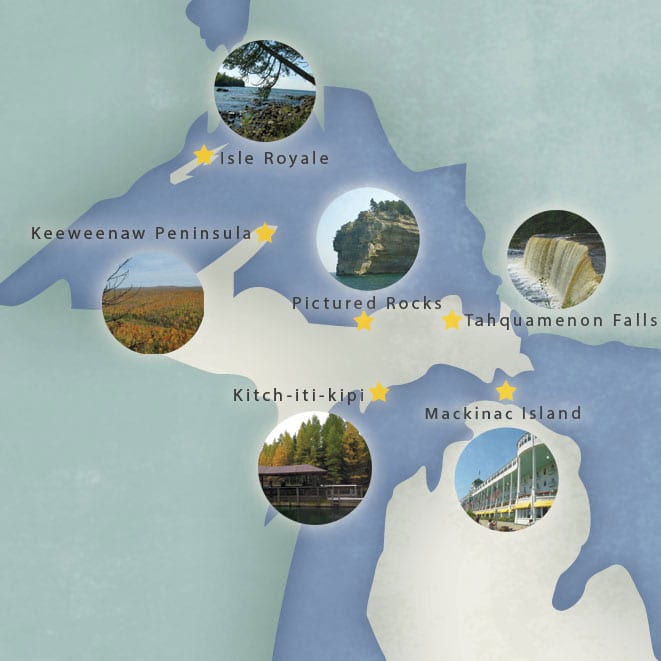 If it’s your first trip to the U.P., there are three places that you must go: Mackinac Island, Tahquamenon Falls, and Pictured Rocks National Lakeshore. These destinations are arguably the most touristy portions of the U.P., but it’s for good reason. Mackinac Island is Michigan’s fudge capital and is free of all automobiles. I highly recommend taking a bike around the circumference of the 8-mile-long island, but you can also travel by foot or by horse and buggy. Perhaps the most famous landmark on the island is the Grand Hotel. Known for its long porch and white façade, it was once one of the destinations on luxury cruises in the Great Lakes. A little over an hour's drive north of Mackinac Island sits one of the largest waterfalls east of the Mississippi, Tahquamenon Falls. The upper and lower falls are roughly 4 miles apart along the North Country trail and are also accessible by car. The falls are as rich in color as the surrounding trees, displaying a distinct brownish color from tannins that leach into the water from nearby cedar swamps. Pictured Rocks National Lakeshore is a roughly 40 mile stretch of shoreline along Lake Superior just outside of the town of Munising. Over the years, Lake Superior has carved out rock formations in the sandstone shoreline that extend hundreds of feet above the surface of the water. The best way to view the formations is by the water; I recommend a boat tour or kayak trip along the shore.

One of the hidden gems of the U.P. Kitch-iti-kipi, also known as “The Big Spring,” is just outside of Manistique. Kitch-iti-kipi is the largest spring in Michigan, with water flowing at a staggering rate of 10,000 gallons per minute! Visitors can view the spring using a hand-operated raft that is easy to use and ADA accessible. The spring boasts greenish-blue, crystal clear waters all the way to its 40-foot bottom, and is home to large trout.

The Keweenaw Peninsula is the perfect launch point for any outdoor adventure. Brockway Mountain Drive in Copper Harbor and Cliff Drive near Phoenix will give you better fall vistas than any other location in the nation. To get the full Cliff Drive experience, you might have to be a bit adventurous. If you bring a GPS and veer off the hiking trail a bit, you come to the cliff face and find a spectacular view of the Keweenaw. At the end of the day, grab a bite to eat at Fitzgerald's Restaurant. Fitzgerald's, which sits right off Lake Superior, offers some of the best barbeque in Michigan and a large assortment of beer and whiskey. If you drink too much that night, just get a room at the Eagle River Inn upstairs from the restaurant.

Isle Royale is the most remote place in Michigan. The island is 40 miles long and 9 miles wide. Aside from the east and west ends of the island, its entire area is backcountry. The best way to see the island is by backpacking the interior or circumnavigating the shoreline. Isle Royale offers the most unique predator-prey relationship in the world. A wolf and moose study has been ongoing for over 50 years. Unfortunately, the declining wolf population is leading to the nearly imminent end of the initial study. However, the low wolf population also means a large spike in the moose population, which means a much better opportunity to see a moose. In other words, the time to go to the island is now! A three-hour-and-fifteen minute ferry ride out of Copper Harbor is offered once a day during the summer season and twice a week in the early fall. Float plane transportation to the island is also available by appointment over the same time frame.

Don't forget, a trip to the U.P. wouldn't be complete without eating a pasty (past-ee). The pasty is a large, savory, empanada-shaped pastry filled with beef, potato, and veggies. My favorite place to eat a pasty is at Muldoon's in Munising. One final thing to keep in mind is that many of the destinations mentioned in this post are not open year round. Mackinac Island and Kitch-iti-kipi are two exceptions. In addition, ferry routes to Mackinac Island are greatly reduced after the summer, and stop running entirely during the winter. In the winter, the island is accessible by plane and snowmobile.

Even if you are not able to make a trip up to the U.P. this fall, I would highly recommend spending some time outside before the weather gets cold. Although there are plenty of fun outside activities to participate in during the winter, I always feel that the best way to embrace Michigan is to take advantage of the unique seasonal weather. So get out there and do a color tour (hike a trail or drive down a heavily-forested road), throw around the pigskin, or cheer on your fellow Wolverines at the Big House!