Fighting for the Humanities on Capitol Hill and Beyond

The humanities are under threat. Much ink has been spilled in recent years in an effort to defend the need for subjects like philosophy, history, and literature in a changing job market where the “hard” skills associated with STEM fields allegedly have greater value. Although supporters of the humanities have spoken out loudly and effectively, the reality is that funding cuts at the state and federal levels are endangering the future of humanistic study more than ever.

In November 2016, I participated in a Humanities Advocacy Workshop in Washington DC presented by the National Humanities Alliance (NHA). The workshop was for attendees of the African Studies Association Annual Meeting, where scholars of Africa gather to present and discuss their research.
My travel to DC was made possible by generous grants from the Rackham Conference Travel Grant and the African Studies Center. The workshop aimed to educate participants about how Congress makes decisions impacting crucial sources of funding for the humanities. By the end of the workshop, we were prepared to meet with our senators and/or representatives to advocate effectively for federal humanities funding. 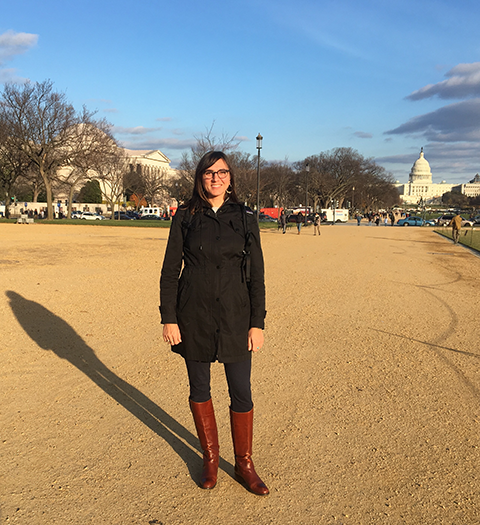 The key sources of federal funding are: Title VI, which funds area studies centers and student fellowships for studying less-commonly-taught languages; Fulbright-Hays, which supports teachers, students, and educational organizations in understanding “areas of the world not generally included in U.S. curricula;” and the National Endowment for the Humanities, which supports state humanities councils, nonprofit educational organizations, and individual scholars. In recent years, these programs have been subject to significant budget cuts. Title VI funding has decreased by 59% since 2010. The proposed budget for Fulbright-Hays in 2017 would amount to a 69% reduction in these programs. Funding for the National Endowment for the Humanities has decreased by 18% since 2010.

After learning the basics about how funding is appropriated, we strategized in small groups to prepare for our afternoon meetings on Capitol Hill. It was exciting to wander through the underground tunnels connecting the congressional office buildings, watching senators and representatives hurrying past with hives of staffers swarming around them, typing furiously on their phones. As a Michigan resident, I had two meetings with staffers for representatives from my state, generously arranged by NHA staff in advance. One meeting was with a staffer for a longtime supporter of such programs, who received me warmly and assured me that his boss had every intention of continuing to support humanities funding. We mostly chatted about living in Michigan, and I expressed my gratitude.

The other meeting was with a junior staffer for a representative who has not supported such programs in the past and is fiscally conservative, so it was more challenging to make a case for the value of the humanities. It was difficult to hold the attention of this frazzled and distracted young man, who appeared to have 1000 other things on his mind during our brief meeting. I appealed to the representative’s strong positions on foreign policy and national security, emphasizing how crucial it is for U.S. citizens to have deep linguistic and cultural knowledge in order to understand the nuances of the complex world we live in. He seemed to agree with me, but I didn’t feel him really engage with me until I appealed to him as a person by telling my own story.

The most effective tool for connection in these meetings was when I described my personal experience with both Title VI (two Foreign Language Area Studies fellowships to study Portuguese in 2008-2010) and Fulbright-Hays (a Doctoral Dissertation Research Abroad Fellowship for my research in Angola and Portugal in 2013). I focused on the effect that these fellowships had on my teaching of undergraduates. Many students have told me that they feel uniquely connected to course material when they learn from someone with real-life experience in the areas of the world they discuss in the classroom. Learning from educators who have expertise in places that are not commonly covered in U.S. curricula has a powerful impact on students’ ability to understand and think critically about the diversity of people, cultures, and lifestyles in the world. Even the most fiscally conservative people on Capitol Hill, it appears, understand why this is important and listen sympathetically. This experience gave me hope that in-person advocacy can be an effective tool to garner support for the humanities across partisan divides.

The Humanities Advocacy Workshop and meetings were an energizing way to kick off the African Studies Association Conference. Learning about how humanities research and programming are funded by taxpayer dollars made me think about the contemporary relevance of the work presented at the conference. When I presented my own research about clothing, race, and the malleable nature of identity and status in Portuguese Angola at the turn of the 20th century, I thought more deeply than I had before about the connections between this colonial context and 21st-century struggles in the United States and Europe over identity politics and personal appearance. These reflections, and the discussions I had with colleagues, will inform my future writing and teaching. Ideally, the work of historians should be able to offer insights into the continuities in human behavior and conflict across centuries and continents. Humanities scholarship and humanities education can have direct impacts on public opinion, which affects civil society and policy; as such, support for the humanities should be growing rather than dwindling at this crucial time in U.S. politics and human history.