Home » Discover Rackham » Not Just a New Name, But New Ways of Thinking: The Rackham Program in Public Scholarship

Not Just a New Name, But New Ways of Thinking: The Rackham Program in Public Scholarship

At the start of this term, I stepped into a new role as a Graduate Student Staff Assistant with the Rackham Program in Public Scholarship. One of my first official responsibilities was helping to coordinate and facilitate an event marking the renaming of Rackham's Arts of Citizenship to the Rackham Program in Public Scholarship (RaPPS). For me, this was equal parts exhilarating and intimidating. Exhilarating because it meant I got to participate in creating the kind of programming that had inspired me to think in new and different ways about my scholarship and teaching, intimidating because I would be part of the conversation in a new and more prominent way than I ever had before which felt like a big responsibility.

Also because the president was going to be there and it turns out, he’s kind of a big deal.

“[Public scholars] have an infrastructure and a vocabulary now.” – Kristin Hass

While the name change provided the occasion for the event, it wasn’t merely a publicity stunt. The new name reflects a commitment to making the program more inclusive and more accessible—it uses language that speaks to scholars working in different disciplines and at different institutions. It recognizes that public scholarship doesn’t belong to any one discipline, and that the increasing investment in “scholarly or creative activity that joins serious intellectual endeavor with a commitment to public practice and public consequence” is both widespread and permanent. Celebrating the name is celebrating the growth and evolution of public scholarship, at U-M and across the country.

The Arts of Citizenship Program was one of the first of its kind, and for over a decade it has served as a leader and a model for other organizations. In the years since its founding, publicly-engaged scholars across the country have worked to articulate a common vocabulary and sets of best practices to guide this work. The term “public scholarship” is not only the preferred language in a national and increasingly international field of scholarship, it more accurately represents the disciplinary range of scholars engaged in this work.

This was an occasion to gather as a community of students, faculty, staff, and community members and talk together about our investment in the work we do together. 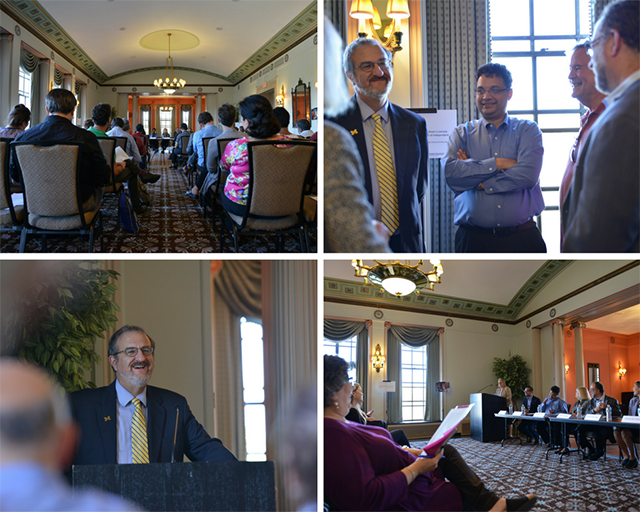 The event began with a speech from University President Mark Schlissel. In his speech, President Schlissel reflected on his ideas about the role of publicly engaged scholarship at the University of Michigan, noting that public scholarship is going to be one of his priorities in the coming bicentennial year. This stated commitment to public scholarship on the part of the university’s leadership was an important one for RaPPS for many reasons. But it was also important to me on a more personal level. As someone whose intellectual and professional development has been profoundly shaped by RaPPS and the field of public scholarship, it was genuinely exciting to hear the president of the university acknowledge the value of this work.

President Schlissel’s remarks were followed by a public dialogue facilitated by myself and Kush Patel, who was previously a Graduate Student Fellow for Arts of Citizenship and is the current Assistant Director of Academic Programming | Postdoctoral Fellow at the Institute for the Humanities. In order to ensure that audience perspectives were included, we moderated Q&A by using a liberating structure pedagogical technique in which audience members submit their questions and comments on index cards, and moderators sift, organize, and present them to the panelists. As opposed to a typical question and answer period, consigned to a few minutes at the end, the bulk of the dialogue is generated by the audience. Mirroring the methodology of public scholarship, this approach holds all stakeholders – panelists, moderators, and audience – equally responsible for the conversation and disrupts a hierarchy wherein a select few people serve as knowledge producers. 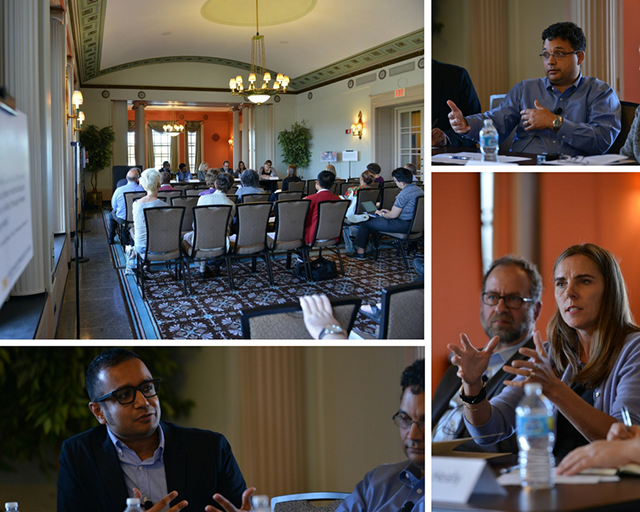 “There’s an evolution from scholars thinking ‘I want to be engaged in the world’ to having [their community engagement] change their research agenda.” -Matthew Countryman

“It's not so much that each project is transformed [by community engagement] as the approach to getting involved is transformed.” – Margi Dewar

When asked how public scholarship had evolved over the duration of their involvement in it, panelists noted the emergence of a common language and community around publicly-engaged academic work. In addition to allowing scholars to speak about their work and experiences, this language is the product and source of the increasingly connected nature of different publicly engaged scholars. Our panelists emphasized that it’s not the work itself that’s new, but our ability to talk about and draw connections between different kinds of publicly engaged scholarly endeavors. In the past, these projects have moved from a type of work that had been dispersed across campus without common language, to now where programs like ours have created an infrastructure to support that kind of work and a shared vocabulary to talk across disciplines about it.

Relatedly, all of our panelists emphasized that there was room for growth in the common language, stressing that different disciplines understand this work in different ways. For example, many social scientific approaches require varying degrees of public engagement, which has not always been true for scholars in the humanities. Arts of Citizenship brought the arts and humanities into the conversation, and in this way it was a national leader. The changes in the Rackham Program in Public Scholarship are reflective of the movement to have more multi-disciplinary conversation and infrastructure to support that.

Finally, panelists noted that publicly engaged scholarly practices are becoming an increasingly critical component of professionalization for younger scholars. This point in particular resonated with my own feeling that my publicly-engaged work has played a huge role in my professional and intellectual development. Given the realities of the academic job market, and the changing nature of the academy more broadly, this training makes students more competitive for a range of diverse careers, including careers as academics. 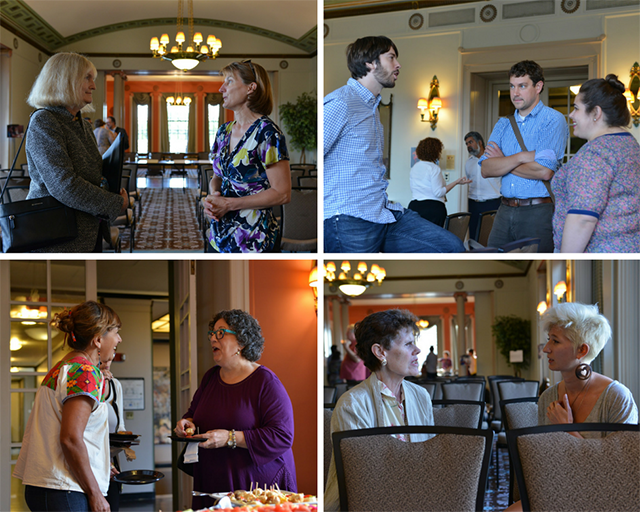 “In the end, in this one life you have, if this marriage of citizenship and intellectual pleasure is how you want to live, you can’t wait.” – David Scobey

Attending this event as a facilitator was a very different experience for me. In the past, I would have arrived at least ten minutes late, grabbed a seat in the back row, and then ducked out before the reception began because “mingling” with people I look up to isn’t always very comfortable for me. But it turns out there are good reasons to stick around a little longer. I got to catch up with an advisor, meet and talk with a scholar whose work I deeply admire, and hear about at least three exciting new projects in the works. It was also powerful to look around the room and really see the community our panelists had been describing: community partners, faculty, students, and administrators in the same place, building the community that enables this work.

I began exploring public scholarship as part of an effort to reconnect with the commitments that motivated me to pursue graduate study, and in that regard, my experience has been an unmitigated success. This work has enriched and clarified my thinking on my dissertation research and expanded my ideas of what a successful future might look like. I value the complexity of my publicly engaged work, but it means I don’t always line up neatly with people’s expectations for what it means to be a literary scholar. It can feel like my work isn’t legible within the academy, that it doesn’t fully “count.” Being in that room, for the official conversation and for the unofficial “schmoozing” afterward, helped me take a step back and see what I do as part of a much larger project, one that I am fully committed to. Hearing everyone from the fellow graduate students to the president of the university talk about the urgency of public scholarship and its potential to help transform the world we live in was affirming and well worth enduring my own social awkwardness and inability to not spill my drink while talking. Because as our founder David Scobey reminds us, you can’t wait.