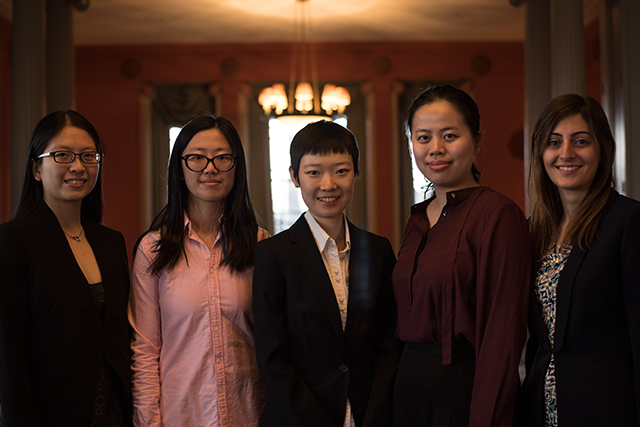 Eight new graduate students joined the ranks of women celebrated as Barbour Scholars at the University of Michigan over the last century. This new cohort, hailing from Taiwan, China, Iran, and South Korea, represents the latest in a legacy of women from Asia who pursue exceptional scholarly achievement to build the academic strength and body of knowledge in their home countries.

Levi Barbour, a University regent in the early 1900s, met three female physicians in China and Japan who had studied medicine at U-M. Impressed with their work, and inspired to help other women pursue advanced degrees given a time and place where those opportunities were a rarity, he endowed the Barbour Scholarship so other deserving women from Asia could study at U-M.

Since its inception in 1917, nearly 700 women have received the Barbour Scholarship. They have lived, worked and researched in their home countries and in the U.S. They have contributed to advances in teaching, policy, education, medicine, engineering and many other fields, and have often been the only women in their countries doing so.

Today’s Barbour Scholars bring a different story. They transcend boundaries and showcase the global level of academia that exists today. Rackham was proud to celebrate these scholars at a luncheon recently, in the company of their faculty advisors and Barbour Scholars from last year to forty years ago.

Wenyu Gu (China) is a Ph.D. student in Environmental Engineering. Her research focuses on investigating the regulation, uptake, and synthesis of methanobactin in Methylosinus trichosporium OB3b. Methanotrophs are a group of microorganisms that utilize methane as their sole source of carbon and energy and play key roles in the global carbon cycle. They have great potential to mitigate methane emissions, degrade priority pollutants, and produce liquid fuels. The first and rate-limiting step in methane oxidation is the oxidation of methane to methanol by the methane monooxygenase, which is significantly regulated by copper and a copper-sequestering molecule – methanobactin. This study investigates the physiological role(s) of methanobactin, and the mechanisms underlying its synthesis and uptake with the purpose of enhancing the use of methanotrophs for environmental, industrial, and medical applications. After graduation, Wenyu hopes to return to China and will actively seek ways to apply her studies to resolve important environmental and industrial issues.

Avish Kosari (Iran) is a Ph.D. student in Electrical Engineering. After completing her master’s degree at U-M, she discovered that she was very interested in Integrated RF (radio-frequency) Circuits. She is working on ultra-low power and radios for the Internet of Things (IOT). Research in this area is motivated by the need for having battery-less or energy harvesting devices. With the development of the IOT technology it will be possible to equip everything in our environment with sensors that receive and transmit data, and help the coordination of tasks. With an interest and training in both research and entrepreneurial activities, Avish sees herself pursuing a career in electrical engineering as an effective way of making a difference in her home country of Iran.

Ha Yeon Lee (South Korea) is a Ph.D. student in the joint doctoral program in Social Work and Anthropology. She is conducting her dissertation research on Vietnamese marriage migrants to investigate the kin relationships and cultures emerging in sending and receiving communities as a result of marriage migration. She also examines the process from a multi-sited, long-term, transnational perspective that emphasizes the interconnections between the lives and social changes in Vietnam and those in South Korea. Her long-term goal is to facilitate in building migrant communities and coalitions that could critically engage with mainstream Korean politics of multiculturalism.

Yang Li (China) is a Ph.D. student in Climate and Space Sciences and Engineering. Her interest in severe smog events in China has directed her dissertation research. Volatile organic compounds (VOC) are a broad category of compounds emitted from human and natural activities that are very reactive in the atmosphere. Yang is using a modeling tool known as a Large Eddy Simulation (LES) model combined with online chemistry to account for the detailed chemical reactions of VOC in conjunction with the physical process that drive their transport. The goal of this is to improve the understanding of VOC oxidation in the atmospheric boundary layer (ABL). Upon graduating, Yang will seek the opportunity to apply the outcomes of her dissertation to improve the understanding of air pollution in China. She hopes to start with selecting simulation cases in Beijing, due to its severe air pollution status and the large population affected.

Jihyeon Yeom (South Korea) is a Ph.D. student in Macromolecular Science and Engineering. Her current research is demonstrating a new tool for synthesizing the chiral nanostructures and studying the origin of homochirality in nature. Importance of chirality was discovered in 1963, when critical birth defects were caused by the presence of wrong handed thalidomide in a drug that was supposed to cure morning sickness. Considering that chiral molecular drugs made up one-third of all drug sales worldwide in 2000, chiral selective synthesis and separation are critical for disease diagnosis and therapy in the pharmaceutical industry. A further motivation to study chirality of inorganic nanostructures is to discover the origin of homochirality in natural compounds. The prevalence of only left handed amino acids and right handed DNA in nature is a well-known example of homochirality. However, the origin of homochirality has not been well understood. My research is focusing on interactions between circularly polarized light in the Universe and nanomaterials. The work, published in Nature Materials, is the first experimental evidence that circular information of photon can be imprinted on the geometry of nanostructures. This work has been considered to open new pathways for the synthesis of chiral materials and allow for better understanding of the origin of homochirality.