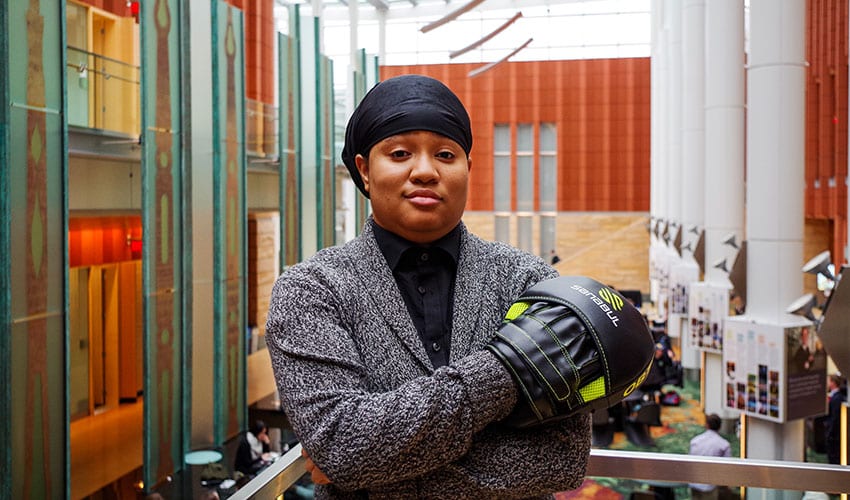 Maryam is a fourth year candidate in American Culture. Her research looks at martial arts during the Black power movement in 60s and 70s, how martial arts were used in other social movements and how we can use and learn from this to build social movements. She explains, “I wanted to look at the long history of Black vets doing martial arts. It is so interesting to learn how many Black movements thought martial arts were crucial and practical because of the self-defense techniques. To build safe social movements, many leaders thought these skills were important, and they grew in prominence in Black popular culture with influence over things like hip hop in 70s-90s.”

Part of her research has been examining how U.S. military influenced that process. “The U.S. military and occupation of Eastern Asia after World War II gave Black people access to martial arts. This is a trend that starts in the 50s at the very least. I’m also thinking about how instructors taught students in social movements differently. They wanted to teach young students a martial arts practice about a liberating connection between their bodies and their minds.”

She came to U-M for her Ph.D. because of the excellent funding she receives as a Rackham Merit Fellow and because of the strength of the Departments of Afroamerican and African Studies and American Culture. American culture was a strong choice for her because of the various ethnic studies programs that are housed there. She shares, “While I’m in African American studies specifically, being able to talk to people who do Latino studies, Asian American studies, and Asian American Pacific Islander studies is important because my work treads into these fields. It lets me think about U.S. militarization in a deeper way and be in touch with so many students who do work in this space and interact with other scholars.”

I’m interested in jobs from tenure track positions to working in a nonprofit. Overall, I want to find a career that allows me to teach self-defense in ways that empower people and make them feel better about themselves.

Maryam is writing her dissertation prospectus and looking forward to digging into more archival work and oral histories of martial arts throughout recent history. One particular component of her research she’s excited about is the feminist and Black feminist groups who incorporated martial arts in social movements. She comments, “Martial arts were an important part of them radicalizing and learning how to defend their communities. Often people think of martial arts as a hetero male and hyper masculine thing, so it is exciting to see historically that this has not been just for men and see people of color and women of color participating.”

Maryam now has a 2nd degree black belt in Goju karate. You know this style if you’ve ever ‘waxed on, waxed off;’ this is the type of karate you see in the Karate Kid movies. Maryam grew up doing martial arts. She recalls, “I was homeschooled until high school and my dad was my P.E. teacher. He talked about his experience doing jiu-jitsu in the 70s in New York. I loved martial arts films, and as a kid I wanted to do everything I saw. On my 12th birthday, my dad signed me up.”

She hopes this research opens a variety of job paths. She says, “I’m interested in jobs from tenure track positions to working in a nonprofit. Overall, I want to find a career that allows me to teach self-defense in ways that empower people and make them feel better about themselves.” Pursuing museum and research work is appealing to Maryam as well. Last summer, she curated a section on Martial Arts in the Black Power Movement as a part of a Black Power at 50 exhibit in the Schomburg Center for Research and Black Culture in New York.

She is currently working with the International Muslim Women’s Initiative for Self-Empowerment (IM WISE) as a volunteer self-defense instructor. “My goal is to use martial arts to help in community organizing. I want to continue scholar-activism.” Still, Maryam never saw herself being a self-defense instructor. She has been teaching martial arts for over a decade, and she sees self-defense built in to the discipline. She says, “Martial arts are part of a larger curriculum that builds character. Self-defense comes out of these art forms, and there are reasons that these old art forms have survived for centuries. They have adapted and changed modestly because they were already practical and useful.”

As an undergrad, she organized self-defense programs for Muslim women after watching the prevalence of hate crimes against Muslims. Today, she continues that work here in Ann Arbor with a variety of groups and organizations. She hosts a three-hour anti-hate crime self-defense class, and has even offered them for graduate students here at Rackham. She says, “I want to give people techniques to make them feel more comfortable. I love teaching; it allows me to interact with variety of people I wouldn’t normally meet.”