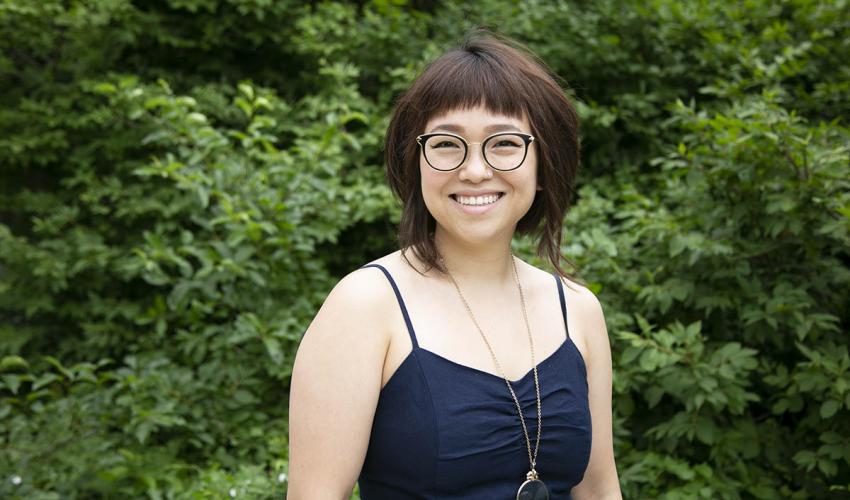 Melissa Coppola is bringing classical music to life, not only for those who already love it, but for those who have yet to experience it. According to the National Endowment for the Arts, classical music attendance has decreased rapidly over the last ten years, and Melissa thinks making it more interactive could help. “By presenting music in thought-provoking ways like adding visuals and other interesting elements and media, we can bridge that gap,” she explains. She is no stranger to this concept, as her master’s thesis was a piano piece accompanied by a video shot from inside the piano as she played. “Live performances like piano recitals can be intimidating. Interactive material or sharing on social media so people know what to expect can make audience members more comfortable.”

Melissa is a D.M.A. candidate in the School of Music, Theatre, and Dance (SMTD) with a concentration in piano pedagogy and performance. She focuses primarily on how musicians, teachers, and others in the world of classical music can make this art form more accessible to audiences of all ages, interests, and musical affinities. In fact, accessibility has been a common thread throughout her graduate career, both in and alongside her studies.

During a break in her master’s program, Melissa co-founded and now directs Girls Rock Detroit (GRD), a non-profit organization that fosters creative expression, self-esteem, and community awareness through music education and performance. GRD serves girls, gender non-conforming, and transgender youth as part of the Girl Rock Camp Alliance. Part of the programming for GRD includes a five-day summer camp that allows campers with as little as no musical experience to learn how to write songs, DJ, or play in a band. More than 150 local musicians and volunteers donate their time each year to mentor the participants as they focus on creativity, team building, empowerment, and self-discovery. “We’re working toward a world where all kids, especially young women, are encouraged to play music, and better yet, to play loud music if they want. We want them to know they can, even if they haven’t traditionally seen people like themselves in that space. We can present them with role models to show them the possibilities.”

Additionally, GRD hosts a “Rock Roulette” each spring, during which established musicians, all women, collaborate to form brand new bands and raise funds for summer programming. Melissa has been a recipient of funding, both from generous donors and through her department, in large part helping her further the goals of GRD. The EXCEL (Excellence in Entrepreneurship, Career Empowerment, and Leadership) Prize, awarded through SMTD, allowed her to purchase $10,000 worth of instruments for Girls Rock Detroit camps. One of the barriers often faced by kids who are interested music is the cost of the instruments. With resources like this, they can become familiar with the instruments and learn to play them without the burden of making an expensive purchase. Most recently, Melissa also received an EXCEL Enterprise micro grant to help fund a mini-documentary on the Girls Rock Detroit summer camp program, as well as the Presser Graduate Music Award, which includes $10,000 of funding towards the research and development of the modern piano concert experience in three presentations. Melissa was also a recipient of the Patricia Joy Arden Scholarship and the James A. Walgreen Keyboard Scholarship during her time as a master’s student.

Melissa originally came to the University of Michigan for graduate school because of its renowned School of Music, Theatre, and Dance and the opportunity to play in halls like Hill Auditorium. Since then, she says her experience has been both awesome and challenging. “The halls are amazing, and the many performance opportunities have helped me grow immensely. Being a part of such large productions has been absolutely transformative.”

Melissa has also spent time in SMTD’s EXCEL lab exploring how she can incorporate her love of pop and rock music into what she ultimately wants to do, all while continuing to work as an artist. “I still have my moments of ‘What do I want to be when I grow up?’” she admits. While she hopes to explore jobs in academia and eventually chair a department, her dream is to start her own music school, one that is community based and accessible to everyone. “I feel very privileged that I’ve been able to make my life as a musician wherever I’ve been,” she says, as she continues to work to provide that same opportunity to others.