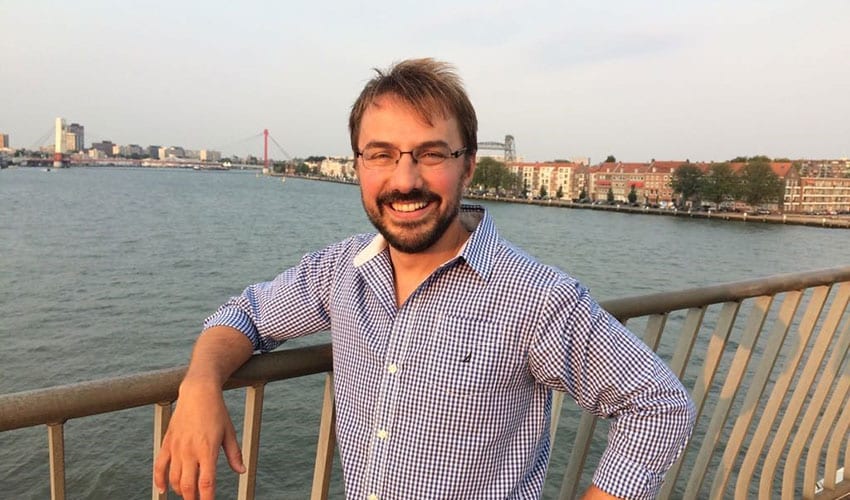 Originally from Italy, Paolo Maranzana earned his master’s degree in the UK and came to the University of Michigan with an already-established international point of view. As an aspiring scholar of archeology, he wanted to go somewhere on the cutting edge of the field, an institution that could support his research ideas and his desire to teach. He had a specific interest in Roman cities, and he knew there were at least four faculty members at U-M who were already working closely with the kind of research he hoped to conduct. One of those faculty members needed additional staff on an excavation, so Paolo submitted his application and was chosen to assist. Through their working relationship, Paolo became further interested in coming to Michigan to pursue his doctoral degree, a decision that was strongly encouraged by the lead professor on the dig. When he came to Ann Arbor for a visit in 2011, he became more familiar with the variety of academic and financial resources available, and his positive experience was only complemented by the welcoming environment on campus.

Aside from the academic factors, funding also played a significant role in Paolo’s decision.

“Funding was scarce in Italy and the UK. There wasn’t enough to support my research ideas, so it was a pleasant surprise. I was able to come here and teach, which I probably couldn’t have done at a European university.”

According to Paolo, donor funding has continued to play a substantial role in his successful graduate career thus far. He received summer support to run his own projects and funds to conduct research abroad in an exchange program at the University of Vienna. He also was awarded Rackham funds that allowed him to attend conferences all over the world, including those in Budapest and Berlin. Paolo even received emergency funds to help mitigate the financial stress of unpredictable expenses.

“It’s truly invaluable for a young graduate student. I’ve been able to go to international conferences and lead my own projects. Funding isn’t just handed out, but a good project will eventually be rewarded.”

Now in the homestretch of his Ph.D., Paolo is conducting archeological research in cities around Rome and Turkey and has traveled to different locations each summer since 2005. He strives to study the end of the Roman world as a result of invasion and political economic crisis leading to the collapse and disappearance or cities. Currently, he is focusing primarily on Ankara, the capital city of Turkey.

“Archeology has a lot to teach the world. I want to find ways to show people history and anthropology are relevant to today’s society and that cultural processes are just as important as biological processes. We’re not interested in studying people who died hundreds of years ago – it’s important to know where we all came from.”

When he completes his doctoral program, he hopes to pursue an academic career, but in hopes of making it “not too academic.” He would enjoy a job that would involve public outreach and framing his field as being more relevant to everyone, piquing interest in people who may have none.

Aside from his academic work, Paolo has established a place for himself within the campus community. He is happy to have found a welcoming, interdepartmental community based at the Kelsey Museum. From the friendly staff to the helpful faculty, Paolo says these connections have been extremely valuable in overcoming obstacles. “I appreciate that people aren’t big on hand holding, but they’re happy to provide mentorship when you seek it out. It works really well that way.”