Telling Different (Hi)stories About Writing Assessment in the U.S.

Bouchet scholar and Joint Program in English and Education Ph.D. graduate J.W. Hammond addresses historical racial inequities in the field of writing studies, and how to combat them. 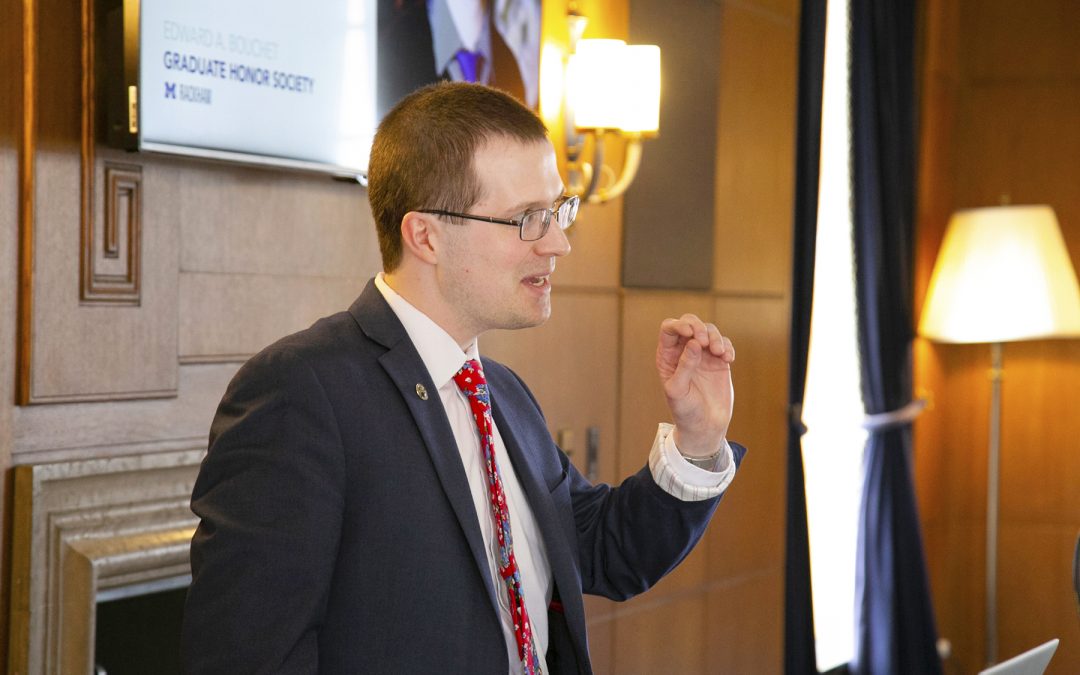 Note: This blog post centers on social injustice and historical memory, and includes descriptions of racism, eugenics, and colonialism.

On August 23, 2019, subscribers to the New York Times podcast The Daily found themselves listening to the first episode of a new audio series, centered not on an emerging news story or event (The Daily’s typical focus), but instead on a story as old—indeed older—than the United States itself. Hosted by Nikole Hannah-Jones, the series—“1619”—aims to intervene in popular understandings of the history of the United States by shifting the way this history is commonly told:

“The 1619 Project is a major initiative from The New York Times observing the 400th anniversary of the beginning of American slavery. It aims to reframe the country’s history, understanding 1619 as our true founding, and placing the consequences of slavery and the contributions of black Americans at the very center of the story we tell ourselves about who we are.”

Complete with a sample curriculum for classroom use, Jones’s remarkable multimodal “1619 Project” exemplifies the pedagogical potential of re-telling the story of the past with an attention to questions of racism and social justice. Perhaps not coincidentally, since the launch of the “1619 Project,” it has become possible to watch televised presidential debates wherein the idea is publicly endorsed that “Racism in America is endemic. It is foundational. We can mark the creation of this country not at the Fourth of July, 1776, but August 20, 1619….”

As I have argued elsewhere, how we tell history matters, in part, because history shapes what Kathleen Weiler calls “a sense of reality,” and underwrites popular and political understandings of the pasts that live on in the present. Telling different (hi)stories creates opportunities for understanding the present differently, for having different popular and political conversations (about Confederate statues and the “achievement gap” in U.S. education, for instance), and, perhaps, for promoting different futures as well.

In my scholarship as a historian and writing educator, I have been inspired by recent efforts to reframe historical narratives about schools and schooling in the United States—efforts that show how classroom spaces have participated in structural violences or in efforts to dismantle them. Locally at the University of Michigan, for instance, the educational activism of faculty, students, and community members resulted in the 2018 decision to rename campus buildings that had previously memorialized leading advocates for eugenics and white supremacy. And within the academic discipline of writing studies, scholars such as Iris D. Ruiz and Shirley Wilson Logan have worked to combat racial erasures in the histories circulated about rhetoric and writing education in the United States, recovering and recentering voices and experiences too often marginalized within the discipline’s (often white-centric) tellings of its past.

In my own research on writing assessment in the United States, I have sought to expose and examine the ways that judgments about writing have historically doubled as judgments of people—judgments that advance racist, eugenic, and colonialist agendas in the process. Although a growing number of scholars have expressed concern that the writing classroom can perpetuate racial injustice by penalizing linguistic diversity, existing historical narratives about the origins and legacies of writing assessment in the United States have—with few exceptions—had little to say about racism. Alongside other writing-studies scholars, I recently contributed to an open-access collection that attempts to reverse this disciplinary trend: Writing Assessment, Social Justice, and the Advancement of Opportunity, edited by Mya Poe, Asao B. Inoue, and Norbert Elliot.

My chapter in this 2018 collection, “Toward a Social Justice Historiography for Writing Assessment,” makes the case that when writing assessment scholars engage in the writing of history (i.e., historiography), they benefit by remembering that the stories we tell about the past are never neutral: These stories reflect assumptions about whose stories matter. I call for historians of assessment to attend more regularly and more explicitly to questions of social justice and injustice in their work:

“Assessing the history of our assessments affords us the opportunity not only to (re)define our disciplinary history relative to the project of social justice, but also to rethink assessment. In this way, social justice historiography assists not only in (re)writing the past of writing assessment, but also its present and future.”

Illustrating what such an approach to the history of writing assessment might look like, I returned to the pages of The English Journal—foundational for the historical formation of writing studies as a discipline—to show how, from 1912 through 1935, the journal circulated xenophobic narratives about immigrant students and boosted the idea that the writing classroom can promote national security, stability, and health by eliminating putatively “foreign” languages. To the extent that 21st century writing classrooms in the United States militate against language diversity, with present day linguistic prejudices providing vehicles for nativism and racism, it is important to remember that these developments are not new or accidental: They are the seeds of earlier prejudices planted deep within the writing classroom’s past and coming to fruition in the present.

There are more histories to tell. Thankfully, I am far from alone in this work. In this same 2018 collection, Keith Harms raises awareness of how, during the early 20th century U.S. occupation of the Philippines, English-language writing tests participated in a project of imperial domination. And through interviews and archival research, Sean Molloy recovers the history of the 1960s SEEK (Search for Education, Elevation, and Knowledge) desegregation program at the City University of New York, which offers one past model for writing education intentionally designed to combat structural inequality. Through their historical accounts, these scholars contextualize and support ongoing efforts within writing studies to promote fairer assessment practices in the present—efforts that have advanced antiracist and decolonial frameworks for assessment, as well as introduced new ways of examining assessment fairness at the levels of design, impact, and theory.

Even so, the discipline of writing studies is only now beginning to more fully acknowledge the potential of writing assessment to advance (or combat) structural inequity. Grappling with ongoing historical injustices in an academic discipline means understanding that present ills result not merely from the work of a few bad actors, but instead are systematic in their origin and reach. Addressing present injustices in the writing classroom requires structural change; telling different histories is one way the discipline can begin to identify the roots of these injustices.