Erin Leary is in the second year of her Ph.D. in the Department of American Culture, researching the intersection of Indigenous studies and climate change. Leary’s (Re)mapping project seeks to recenter Indigenous knowledge through placemaking. 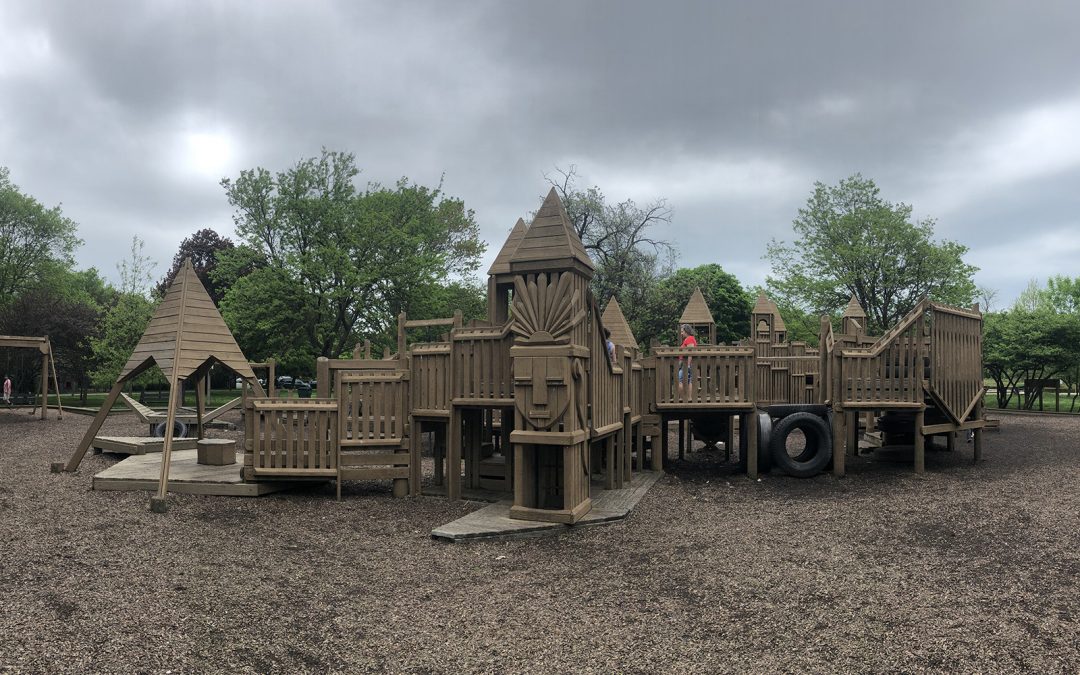 Just north of the Diag, between the School of Kinesiology Building and the Chemistry Building, on a low square of concrete directly across from a high flying U.S. flag, sits a plaque created by U-M’s History and Traditions Committee commemorating the University of Michigan’s 1817 “Native American Land Gift.”

To Erin Leary, a Rackham student researching Indigenous studies and environmental studies, commemorative plaques offer a fixed state of thinking, their language and form reflective of a specific time and a specific perspective. Leary seeks forms of dialogue and reflection that are less fixed and reflect active, ever-changing relationships.

“I’m interested in conversations about decolonization as an active process, with an ongoing sense of engagement,” Leary says. “For example, how can celebrations serve as an alternative to static commemorations by bringing communities together through music, poetry, talks, making things, and sharing food?”

You Are on Anishinaabe Land 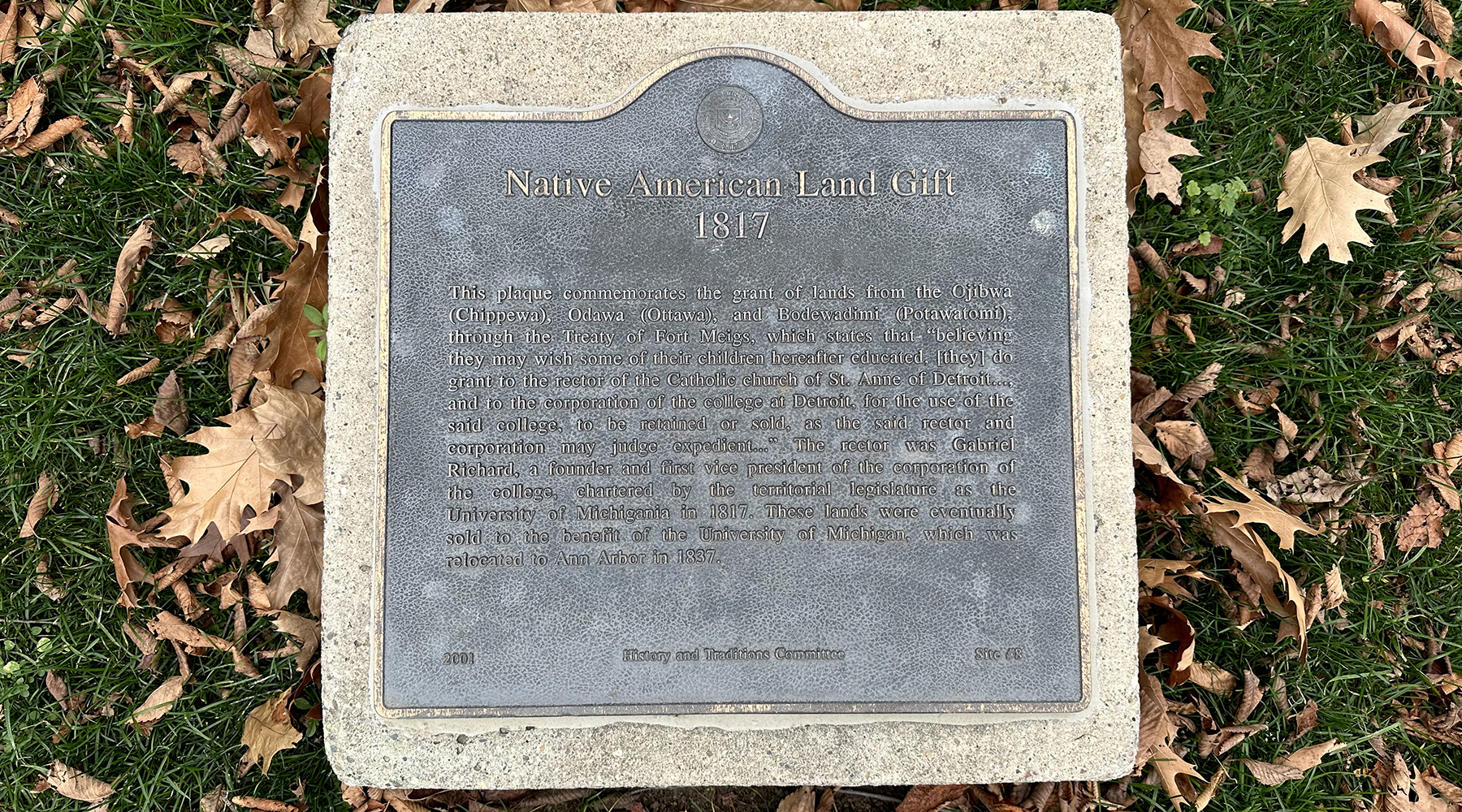 The University of Michigan’s Native American Land Gift 1817 plaque. Photo courtesy of Erin Leary. Text:
This plaque commemorates the grant of lands from the Ojibwe (Chippewa), Odawa (Ottawa), and Bodewadimi (Potawatomi), through the Treaty of Fort Meigs, which states that “believing they may wish some of their children hereafter educated, [they] do grant to the rector of the the Catholic church of St. Anne of Detroit … and to the corporation of the college at Detroit, for the use of the said college, to be retained or sold, as the said rector and corporation may judge expedient … ” The rector was Gabriel Richard, a founder and first vice president of the corporation of the college, chartered by the territorial legislature as the University of Michigania in 1817. These lands were eventually sold to the benefit of the University of Michigan, which was relocated to Ann Arbor in 1837.

Unveiled in 2002, the plaque commemorates the grant of lands from the Anishinaabe peoples—the Ojibwe, Odawa, and Potawatomi—to establish the University of Michigan’s Ann Arbor campus through the Treaty of Fort Meigs, one of the many land loss agreements signed in the aftermath of the War of 1812. Critics of the 20-year-old plaque have noted that land loss agreements from this period were rarely “gifts” as the plaque asserts, but rather concessions made in the aftermath of war that had—and continue to have—devastating consequences for Native American families and communities.

Leary also points out that the word “gift” used in the U-M plaque has different meanings across cultures. “For settlers, the word ‘gift’ is too often about transferring ownership; for the Anishinaabe people, gifts may be more about relationships and a culture of reciprocity,” she says. 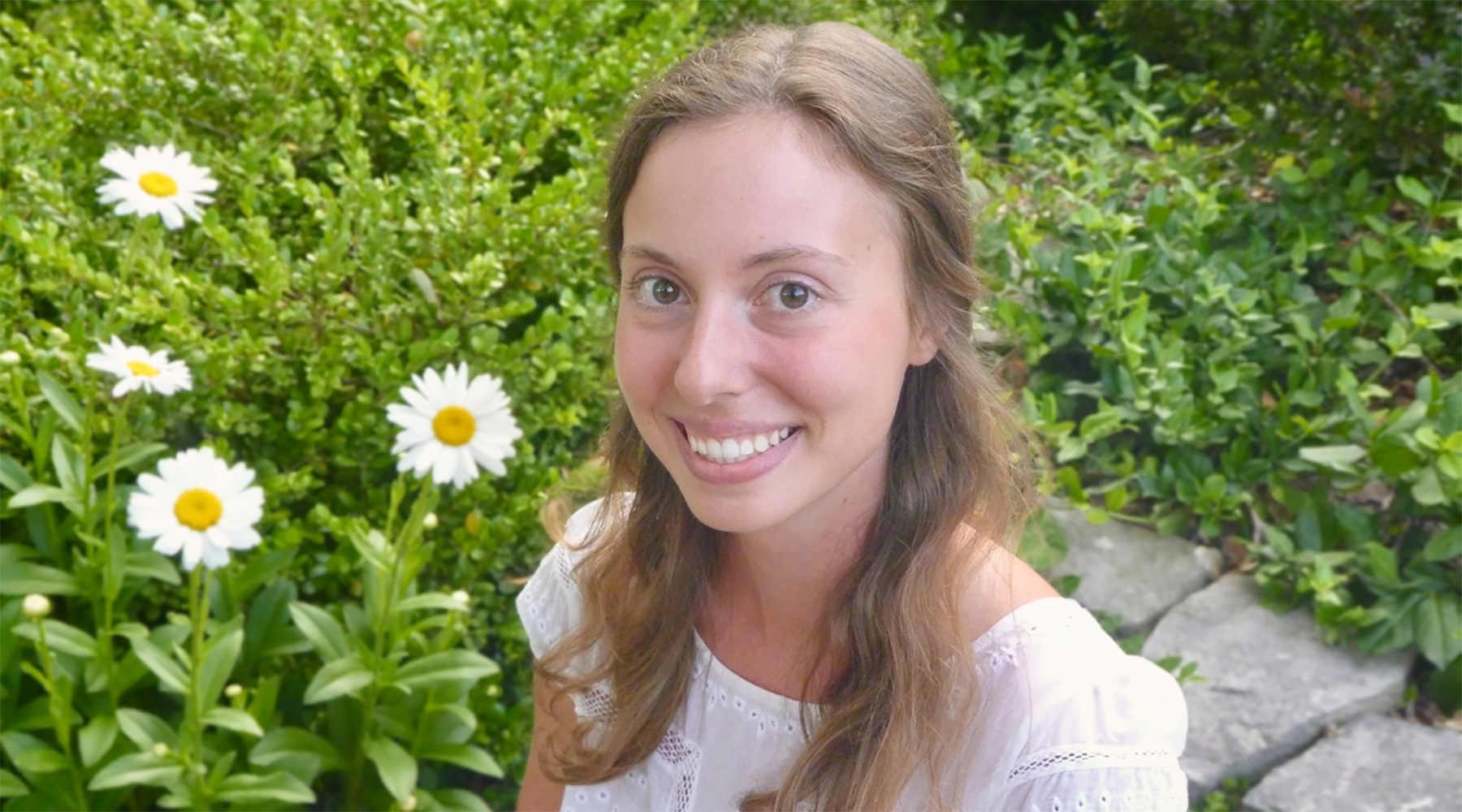 Erin Leary is in the second year of her Ph.D. in the Department of American Culture, researching the intersection of Indigenous studies and climate change.

Before her Ph.D. studies in the Department of American Culture at U-M, Leary majored in English literature at Northwestern University, with a minor in environmental policy and culture. There, she found that the Indigenous perspectives studied in her English coursework offered critical perspectives on another topic that she cares deeply about: climate change.

“The climate scholarship that I was encountering in Earth science didn’t get at all of the complex social underpinnings to what led us to the state we’re in,” Leary said.

Leary cites the research of Kyle Whyte, a U-M professor and an enrolled member of the Citizen Potawatomi Nation, on “crisis epistemology,” the idea that people who perpetrate colonialism often defend their actions as necessary responses to unprecedented, imminent, and/or urgent crises.

“Before we can move forward meaningfully with climate action, we have to de-center what that sense of urgency looks like,” Leary says. “We need to slow down and think about the relationships and people who are being harmed in our proposed solutions.”

Leary is interested in placemaking as a way to encourage communities to better understand their relationships with one another, with their histories, and with the land.

“Parks are places where a lot of people can come in and encounter new things,” Leary says. “You don’t go to a park necessarily thinking that you’re going to read a plaque, so it’s an interesting place for people to come into contact with these topics.”

As was the practice of many urban planners in the early United States, major roads in Chicago are paved-over Indigenous pathways. Long before U.S. settler occupation, generations of Indigenous peoples traveled along and gathered beside the path that is known today as Rogers Avenue, home to Indian Boundary Park. In 1816, the U.S. government used the Treaty of St. Louis to define the trail as a formal boundary, separating Native American communities and white settlers, who occupied the areas south and east of the boundary line.

“I was struck by the layers of history in the landscape when I learned that this road is a paved-over Indigenous path,” Leary says. “I encountered this road every day, but prior to my research, I had no knowledge of what came before.”

The history of this boundary is memorialized in a plaque at Indian Boundary Park, although Leary says that the language used is problematic by vaguely acknowledging that “long ago, Native Americans lived on this land,” while failing to name U.S. settlers as the cause of Indian removal.

Additionally, Leary says, the plaque frames Native American presence on the land in the past tense exclusively, disregarding the contemporary presence of over 65,000 Native Americans in the Chicago metro area, with approximately 175 different tribes represented.

Indian Boundary Park is also home to a wooden playscape erected in 1989 by non-Native community members. One side of the playground features a stereotypical Indigenous face wearing a headdress; toy tipis dot the playground nearby. The other side features a railroad scene with a climbable train. Leary’s article offers a critique: “the park […] stages Manifest Destiny, pitting tipis against trains.” 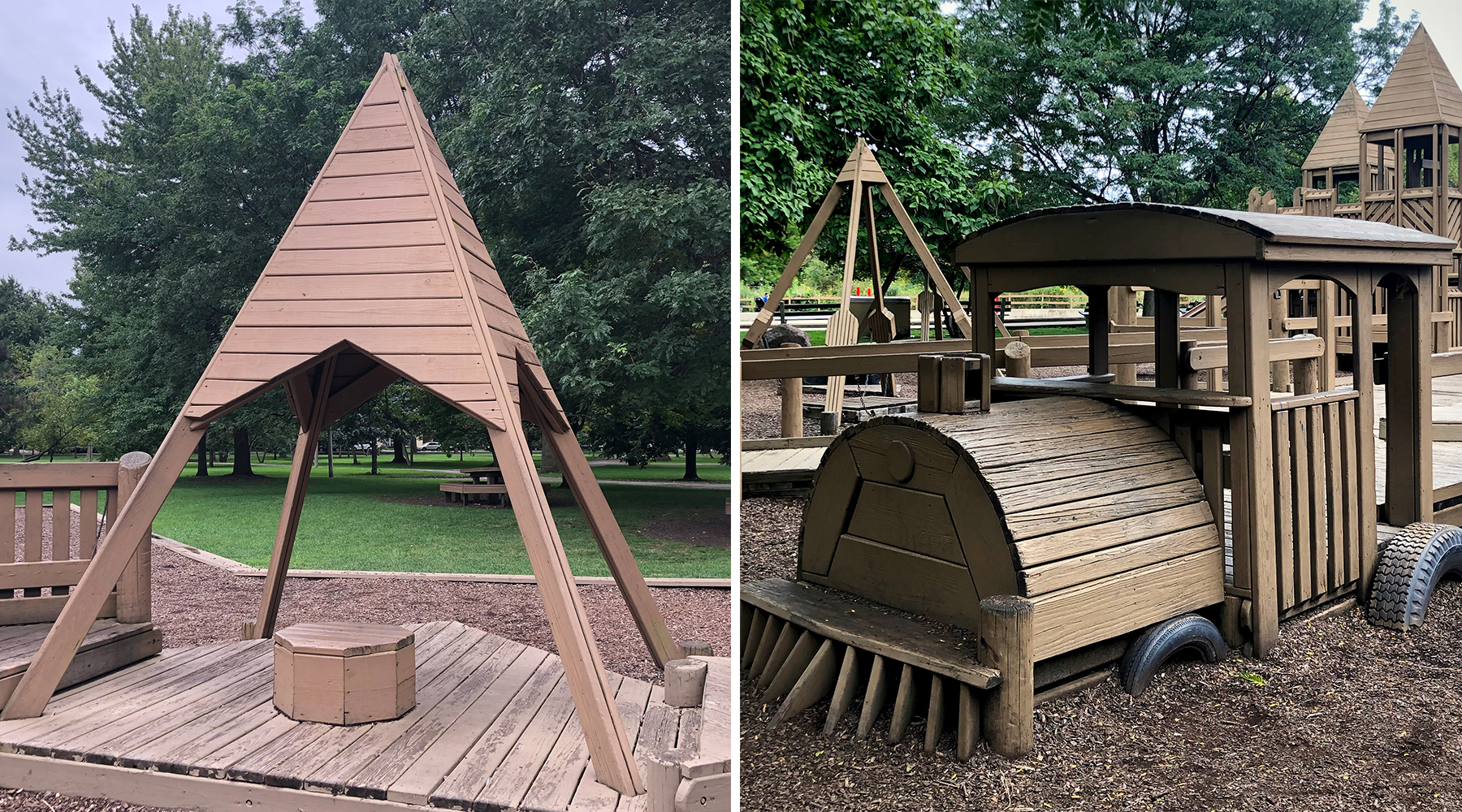 A side-by-side comparison of the tipis and trains built into the Indian Boundary Park playscape.

“These colonial narratives are damaging,” Leary says. “And they are so static and memorialized in the landscape–they can overshadow other active forms of celebration and engagement.”

Reflecting on forms of Native-led, active engagement, Leary mentions the No Boundaries festival held in Indian Boundary Park in the late 1990s, a celebration of contemporary, non-traditional Indigenous art, performance, and music curated by members of the city’s Native community.

In her current research, Leary explores Indigenous practices of centering relationships as a way to slow down the urgent, linear, “crisis-thinking” that dominates contemporary life, including climate change conversations.

Leary shares the Ojibwe story of Mishipeshu, a great underwater being in the shape of a panther with scales and spikes. Paying respects to Mishipeshu is a tradition for many Anishinaabe people before any water travel, for if that relationship is forsaken, he will thrash his tail and wreak havoc through waves and weather.

“I’m struck by the way Mishipeshu encourages humans to reflect on their responsibility for, accountability to, and relationship with the water,” Leary says.

Unlike the ground-level plaque near the diag, visitors to Future Cache look up 40 feet to read the land acknowledgment, printed on the wall in Anishinaabemowin and English: “Gidayaa Anishinaabewakiing / You are on Anishinaabe Land.” 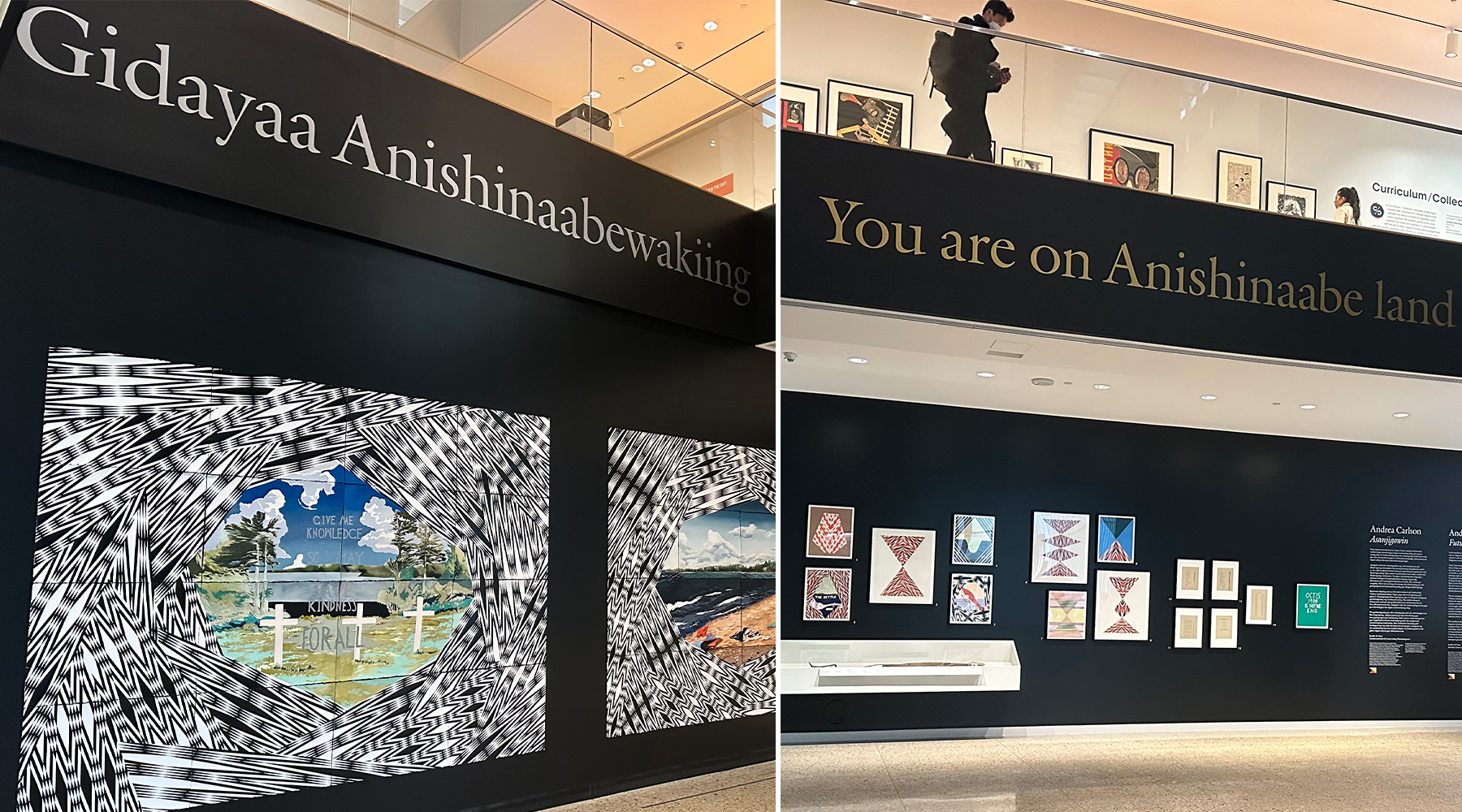 Visitors to Andrea Carlson’s exhibition, Future Cache, on view at UMMA, are greeted by a land acknowledgment, printed on the wall in Anishinaabemowin and English: “Gidayaa Anishinaabewakiing / You are on Anishinaabe Land.”

For Leary, the two U-M sites offer space for critical engagement around the production and purpose of land acknowledgments.

“A land acknowledgment serves as a kind of flagging, drawing attention to the multiple relationalities within a place,” Leary says. “But it needs to go beyond that to communicate your ongoing commitment and relationships to the Indigenous people in this place. That can take time, research, and conversations to uncover. It’s important to prioritize, but not to rush.”

Erin Leary is a recipient of a Rackham Merit Fellowship, providing her with the opportunity to focus on her own coursework and research.

The week-long Rackham Merit Fellowship Connection program is designed for newly admitted master’s and doctoral students to introduce students to resources in Rackham and across the university; provide professional, academic, and personal development experiences to assist with the first-year transition; and to cultivate community among the RMF cohort.