Hanging in the Balance

Bats are a potential source of the novel coronavirus behind COVID-19, but a different affliction is ravaging their own populations. One Rackham researcher wants to help them—and help people grasp their importance to our ecosystem. 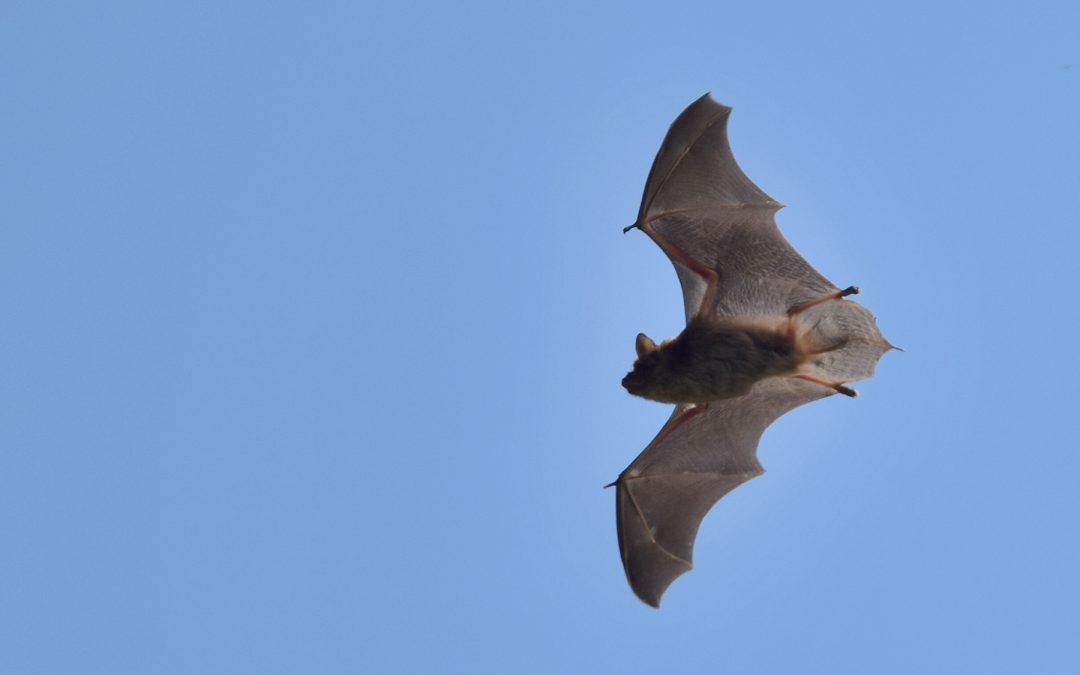 As scientists work to explain the emergence of the novel coronavirus responsible for COVID-19, bats have emerged as one of the virus’s potential origins. Despite this recent bad rap, however, bat species are often key members of the ecosystem. In places like Michigan, they eat vast quantities of insects—not only the mosquitoes that frequently irritate vacationers and outdoorspeople, but moths and beetles that pose serious threats to the agriculture industry. And since 2006, they have been fighting their own lethal epidemic.

In January 2007, scientists working for the New York Department of Environmental Conservation discovered an increase in sick or dead bats in caves near Albany, all sporting what looked like a coating of white dust around their mouths and noses. As they studied the condition, dubbed white-nose syndrome, scientists found it capable of wiping out up to 98 percent of bat colonies’ populations.

Caused by the fungal pathogen Pseudogymnoascus destructans or P. destructans, which likely originated in Eurasia, white-nose syndrome has been observed in 11 species of bats spread across 38 U.S. states and 7 Canadian provinces in North America. These include the endangered Indiana bat, gray bat, and Virginia big-eared bat. Combating this new disease became a conservation priority, and while most efforts focus on the 98 percent that prove susceptible, U-M ecology and evolutionary biology Ph.D. candidate Giorgia Auteri is looking at the two percent who survive.

“When white-nose syndrome comes through an area, most of the affected species are killed,” Auteri explains. “But there are usually survivors, and I want to know if there’s something about them that makes them resilient. If that’s the case, that could be very important for conservationists going forward, because resilient populations may recover quicker and with less need for human help.” 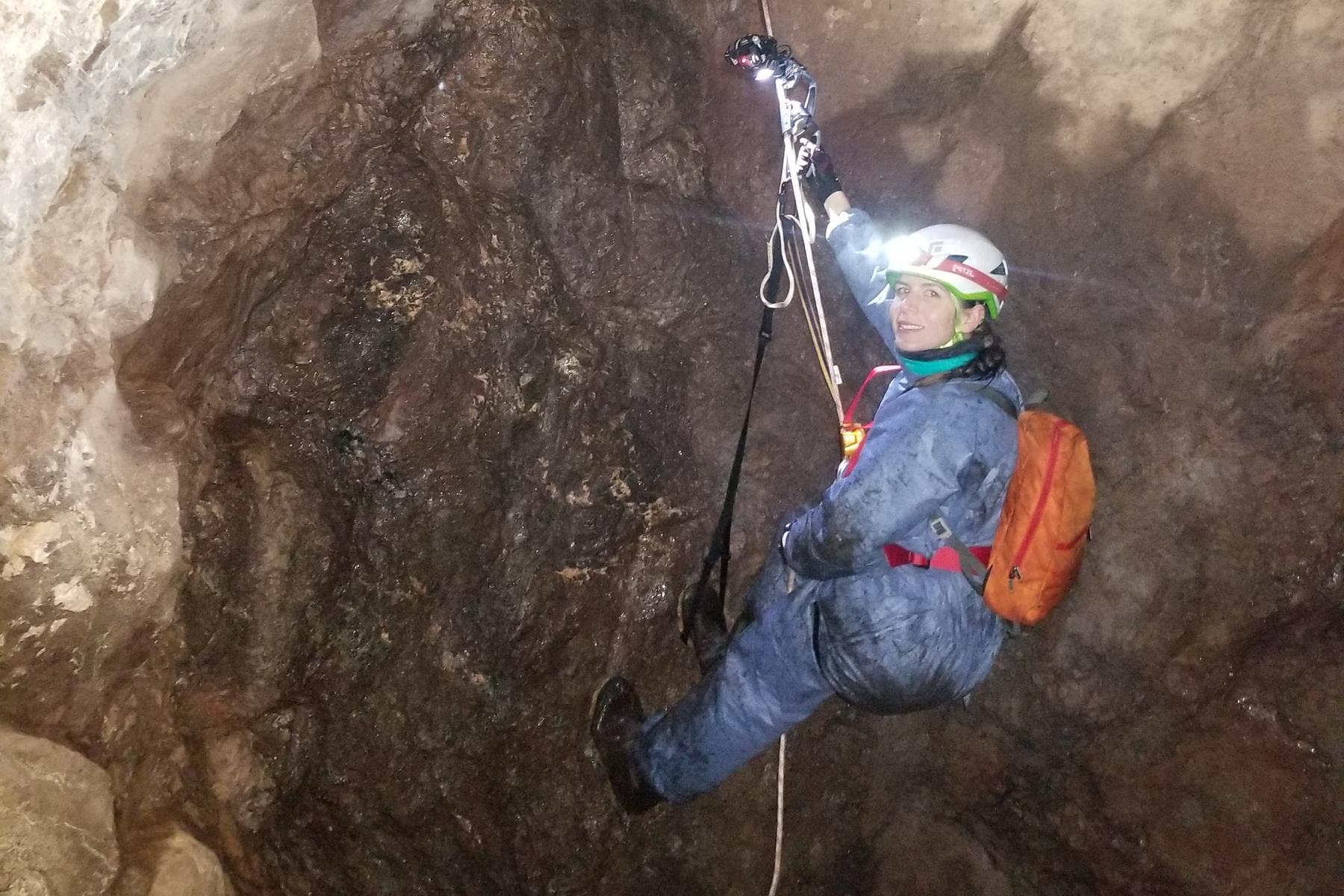 Auteri has worked with bats for virtually all of her scholarly career. From early seasonal jobs monitoring them to working with the North Carolina state biologist’s office as a master’s student at Eastern Michigan University to today at U-M, she has been constantly drawn to the diversity and unique adaptations of these airborne mammals. And the more she learned about them, the more she realized how important they are.

“Bats are really important for the balance of the ecosystem,” Auteri says. “From a human standpoint, they’re a critical part of pest management. White-nose syndrome is the main disrupter for bats and their natural processes, and it’s become impossible for anyone who works with bats in this country to ignore.”

Rather than killing bats outright, the lethality of white-nose syndrome comes from its ability to disrupt bats’ natural hibernation cycle. Like many other mammals, most bats that live in northern climates hibernate in caves and other shelters for the winter, relying on a slowed metabolism and accumulated fat stores to see them through the cold months. As P. destructans spores grow on their faces and wings, however, they cause both skin irritation and potentially limit bats’ ability to breathe. Cleaning off the irritant means an affected bat has to wake up in the middle of winter, expending valuable energy it would otherwise need to endure the harsh conditions. After several early awakenings, most bats simply no longer have the necessary reserves and succumb to the elements.

In light of the pathogen’s widespread death toll and threats to several endangered species, scientists have been searching for ways to fight it, or at least mitigate its spread, since its discovery. And Auteri was determined to find answers—no matter how deep she had to go to get them.

That’s how she found herself hundreds of feet underground in the abandoned mines of northern Michigan. While the state’s lower peninsula does not feature many caves, the copper and iron mining boom of the 19th and early 20th centuries left its upper peninsula riddled with shafts and tunnels running up to 4,900 feet beneath the earth’s surface. These make ideal homes for the little brown bat—a common Michigan bat species with an approximate 75 percent white-nose syndrome casualty rate— as well as the perfect place for Auteri to study them.

During the winter, Auteri visited the old mines to take DNA samples from bats that had succumbed to white-nose syndrome. She returned again during the summer to collect small tissue samples from live, active bats in the same areas. Back at her U-M lab, Auteri then compared the genetic makeup of the two groups of samples, and found some interesting differences. 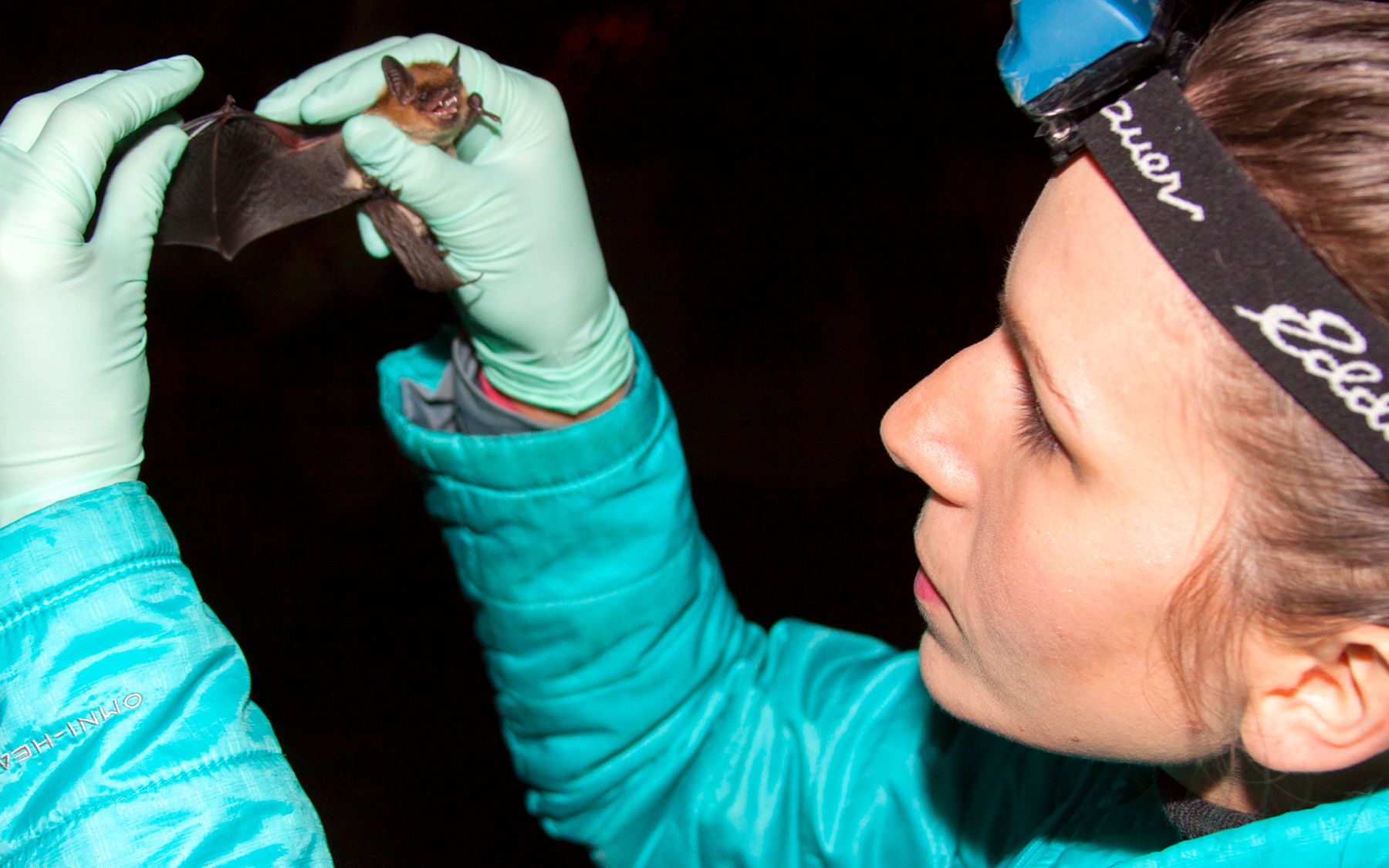 By comparing genetic samples from bats that had succumbed to white-nose syndrome with those of live bats who had survived it, Auteri discovered three key differences that could reveal the secret of the survivors’ resilience.

“We looked at thousands of sites across the genome,” Auteri says. “Three of them showed major differences between the survivors and non-survivors.”

Two of the genes Auteri found have direct links to traits that help bats survive their long winter’s slumber. The first is associated with how the body metabolizes fat, with one version of the gene bestowing a predilection for obesity. While potentially a disadvantage, bats prone to retaining fat would have more energy stores for the winter, and thus could afford to wake more often during their hibernation. Auteri readily identified the second gene, because it fulfills the same function in humans—regulating how we wake from sleep. While it is more difficult to determine how this gene could help a bat weather white-nose syndrome, Auteri says one possibility is that it could allow the bat to more quickly return to its hibernation state or wake up less frequently.

Linking the third gene, associated with vocalization—and with the ability to learn how to speak in humans—to white-nose syndrome remains a mystery, but not an unsolvable one, Auteri says. Since bats use their voices to hunt through echolocation, she suggests one version of the gene may help bats be more effective hunters, thus enabling them to accumulate more fat for the winter.

Taken together, Auteri’s findings show evidence for genetic resistance to white-nose syndrome among bats, and give hope that at least some species may be able to naturally recover from the devastating condition.

“If individuals have genetic resistance, that means they can pass that resistance on to their offspring and may eventually facilitate their own recovery,” Auteri says. “The massive losses white-nose syndrome inflicts means we still want to protect populations as best we can, especially small or endangered ones, but the idea that five percent of a population is adapted to survive this disease, as opposed to merely being lucky enough to survive, is very encouraging.”

Auteri received a Rackham Predoctoral Fellowship, which enabled her to conduct the genetic sequencing of the samples she collected. She is also the recipient of two Rackham Conference Travel Grants, which allowed her to present her research findings at two conferences—the 2017 Evolution conference in Portland, Oregon, where she received helpful feedback on further developing the project, and the North American Society for Bat Research 2018 symposium, where she presented her final results and was presented with the Luis F. Bacardi Bat Conservation Award.

“I’ve had a lot of support from Rackham over the years,” Auteri says. “They contributed to not only my ability to present my work, but to the costs of doing it in the first place.”