Home » Discover Rackham » Why Did the Bumblebee Cross the Road?

Why Did the Bumblebee Cross the Road?

Bees and other insects are crucial for the reproduction of many plant species, but roads often impose obstacles to this vital function. Rackham students Gordon Fitch and Chatura Vaidya studied this problem and proposed some solutions. 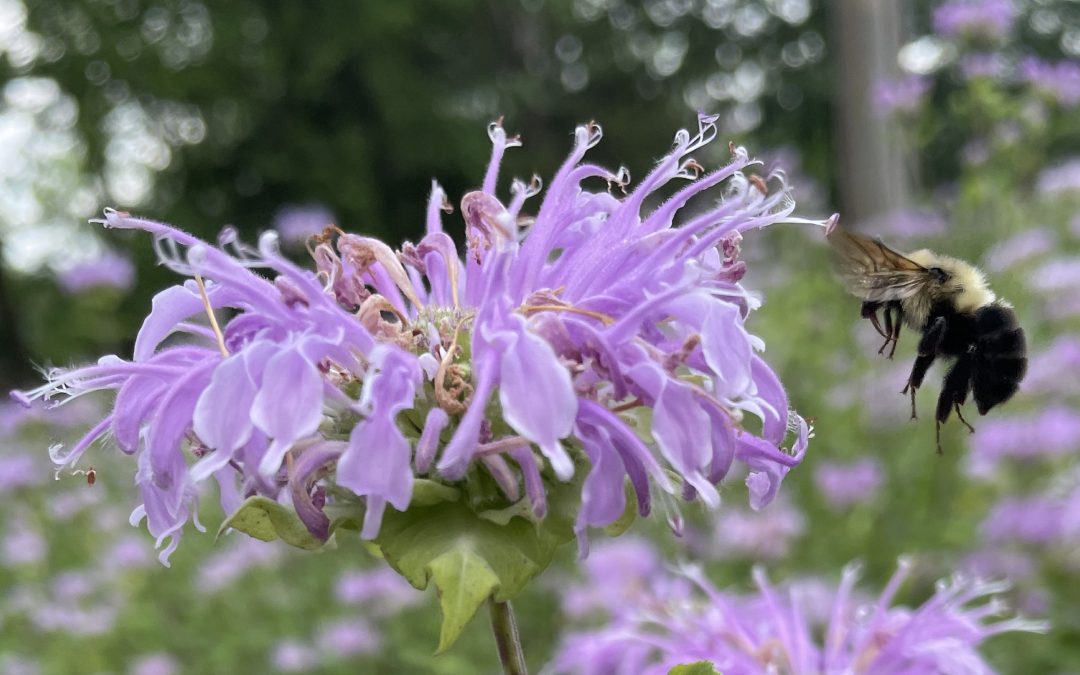 To pollinate flowers on the other side, of course. But for a lot of bees and other pollinating insects, the prospect of braving a vast expanse of concrete filled with speeding vehicles is daunting, if not impossible.

Pollen is a fine, dust-like substance essential for reproduction in many plant species, who often depend on insects to carry it from one plant to another. When such a pollinator, like a bee or butterfly, visits a flower to feed on nectar, pollen becomes stuck to the hairs of its legs or body. That pollen is then brought to the next flower it visits. This dispersal method helps ensure plant populations remain strong and genetically diverse. But habitat fragmentation—the breaking up of large habitats into smaller regions isolated from one another by human land use, such as roadbuilding—may pose a threat to the deeply ingrained strategy.

While habitat fragmentation’s negative impact on the types and diversity of species that are found in a given place has been well-documented by scientists, its impact on how those species interact, such as during pollination, is much less understood. It’s a topic of particular interest to Gordon Fitch (M.S. ’15) and Chatura Vaidya (M.S. ’16), doctoral candidates and frequent collaborators in the U-M Department of Ecology and Evolutionary Biology. 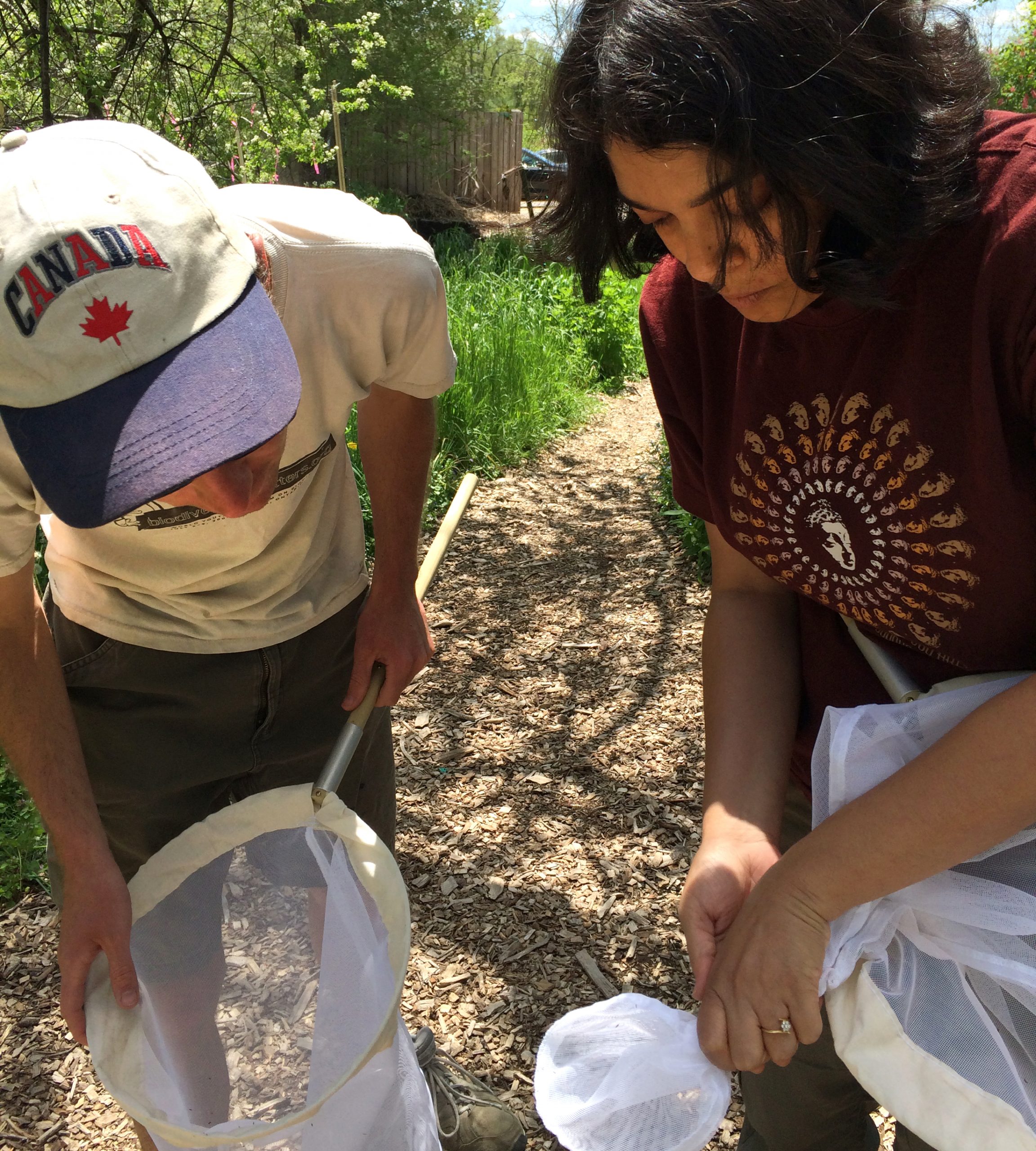 Fitch (left) and Vaidya use nets to collect bees at one of their research sites. Photo by Carolina Roe-Raymond.

Takin’ It to the Streets

When the COVID-19 pandemic derailed their original plans to conduct field research in Mexico and Puerto Rico during the summer of 2020, Fitch and Vaidya turned to their own community.

“Early in the pandemic, we saw news about how the reduction in human traffic was changing wildlife movement,” Fitch says. “That got us thinking about how that might extend to bees and pollination, and how car traffic might influence the way bees forage and if it affects the plants they use for food and pollinate.”

The pair identified 47 sites around the Ann Arbor area ranging in size from single-lane bicycle or walking paths to five- or six-lane roads. At each, they set up potted plants—two across the road from each other, and a third control plant the same distance away, but on the same side of the road—containing two native plants species, bee balm and coreopsis. Coreopsis, which sports small golden flowers similar to asterids, was chosen to attract small pollinators like sweat bees and carpenter bees, whereas the larger, violet bee balm flowers were meant for their more sizeable relatives, like bumblebees and honey bees.

Over the course of the day, Fitch and Vaidya monitored the type and intensity of traffic on the paths and roads, and checked the plants every five to 10 minutes to record what type of, and how many, pollinators were visiting them. And while those data were critical to the study, they didn’t show how much actual pollination was taking place. For that, the researchers turned to a more illuminating technique.

Pollen’s small size makes it difficult to observe in the field without specialized equipment, so Fitch and Vaidya used an artificial substitute they could track more easily—a powder that glows under ultraviolet light. Applied to the flowers of one of their test plants, Fitch and Vaidya were able to shine a UV light on both the control plant and the one across the road to see how much of their surrogate pollen had been delivered. 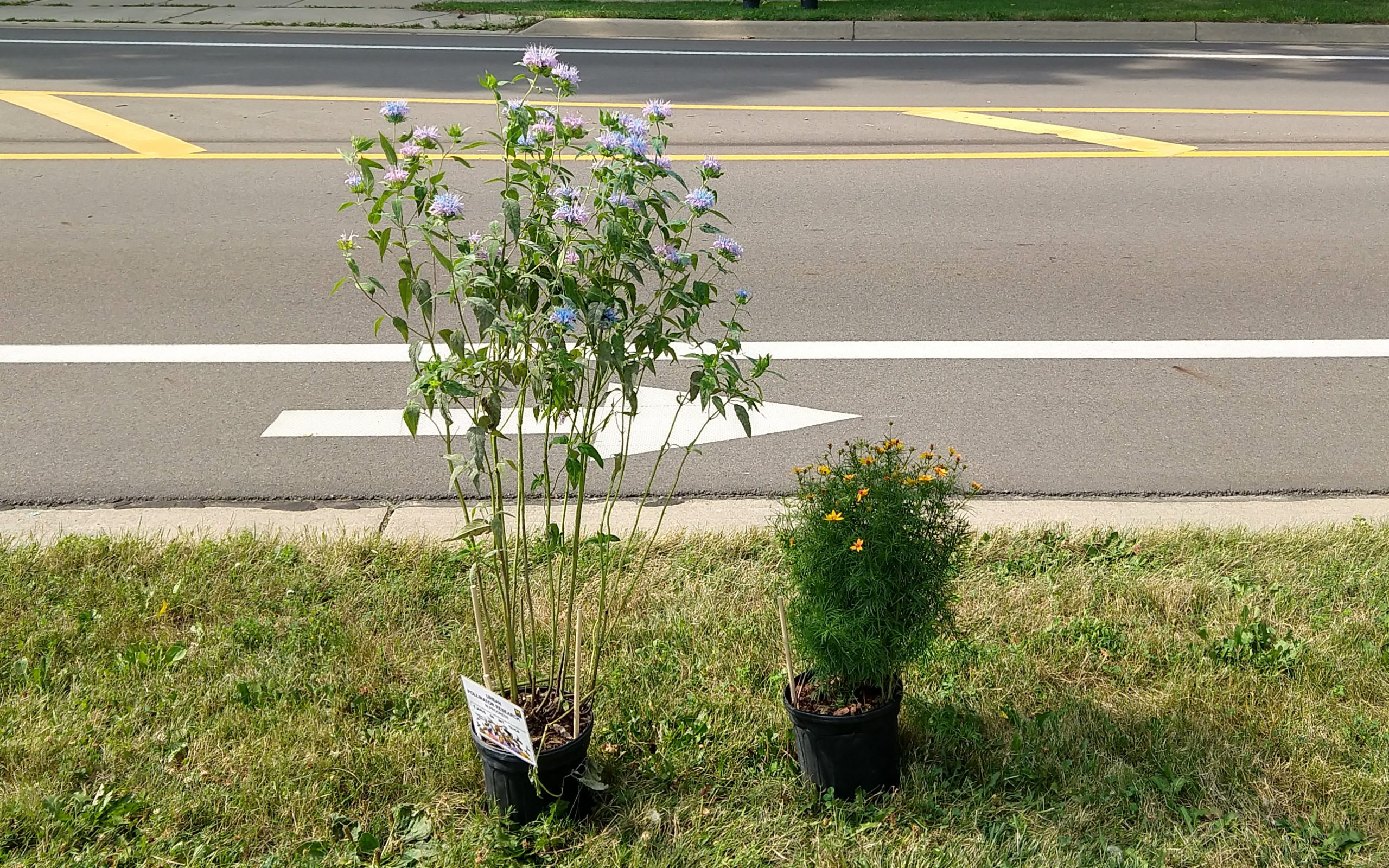 Bee balm (left) and coreopsis plants set up at one of the team’s field sites. Photo by Chatura Vaidya.

Fitch and Vaidya found that roads do, in fact, pose significant obstacles to bees and other pollinators, even as they facilitate human travel.

They found their bee balm plants saw a 34 percent decrease in pollination across the road compared with the control group, while the smaller coreopsis flowers saw an even more drastic 50 percent decrease. The researchers primarily attributed this to a combination of three factors: distance, traffic intensity, and the flight ability of different bee species.

“Generally speaking, the smaller the bee, the weaker it is as a flier,” Vaidya explains. “Larger bees are heavier and have wider wingspans, which means they can navigate through the turbulence vehicles create. Small bees will often just avoid such a crossing.”

Roads also present wide stretches of concrete and asphalt devoid of flowers and other plants, a naturally unappealing area to foraging insects. No matter how many flowers lay on the other side, Vaidya says, most bees would not venture far enough across the barren concrete to discover them.

“We observed that wide roads were often an insurmountable barrier that could fragment bee populations,” Fitch says. “A park surrounded by very busy roads could see bee extinction.”

Fragmentation could lead to serious long-term consequences for plant populations, as well.

“My sense is this is an even bigger issue for the plants,” Fitch continues. “If you have plants that require bees and may not bloom for very long, you won’t get pollination from outside the area, which could lead to inbreeding and reduced populations.”

Much like in animal populations, greater genetic homogeneity often results in lowered fertility, as well as increases in unusual traits that would be rare in larger, more diverse populations.

The team identified several ways communities can mitigate these problems. Reducing the number of cars on the road at any given time is paramount, they say, and can be done through better public transportation services and the construction of more bicycle lanes. Adding plant resources, like flower boxes, to pedestrian crossings and overpasses would help both entice and enable bees to travel across roads safely.

“Our study shows that roads and traffic not only affect pollinators, but plants, as well,” Vaidya says. “If you have more roads fragmenting habitats, you have less gene flow across them, and that makes both plants and pollinators more vulnerable to all the other threats they face. Disease, food scarcity, climate change—the less genetically diverse you are, the less resilient you are.”

Fitch and Vaidya have both been the recipients of Rackham research grants and conference travel grants. In addition, Fitch was awarded a Rackham Predoctoral Fellowship, allowing him to focus on his research.

“Funding from Rackham has been instrumental in my research getting done,” Fitch says. “In general, I’ve had only positive experiences feeling welcomed by the graduate school.”

As a master’s student, Vaidya was the recipient of a summer funding grant from Rackham, and was recently awarded a one-term dissertation fellowship.

“Rackham has amazing funding opportunities,” she says. “Both as a master’s and Ph.D. student, support from Rackham was critical to my research and studies.”