Barbour Scholarship alumna Lili Liu has spent her career with the World Bank, helping governments around the world better serve their people. 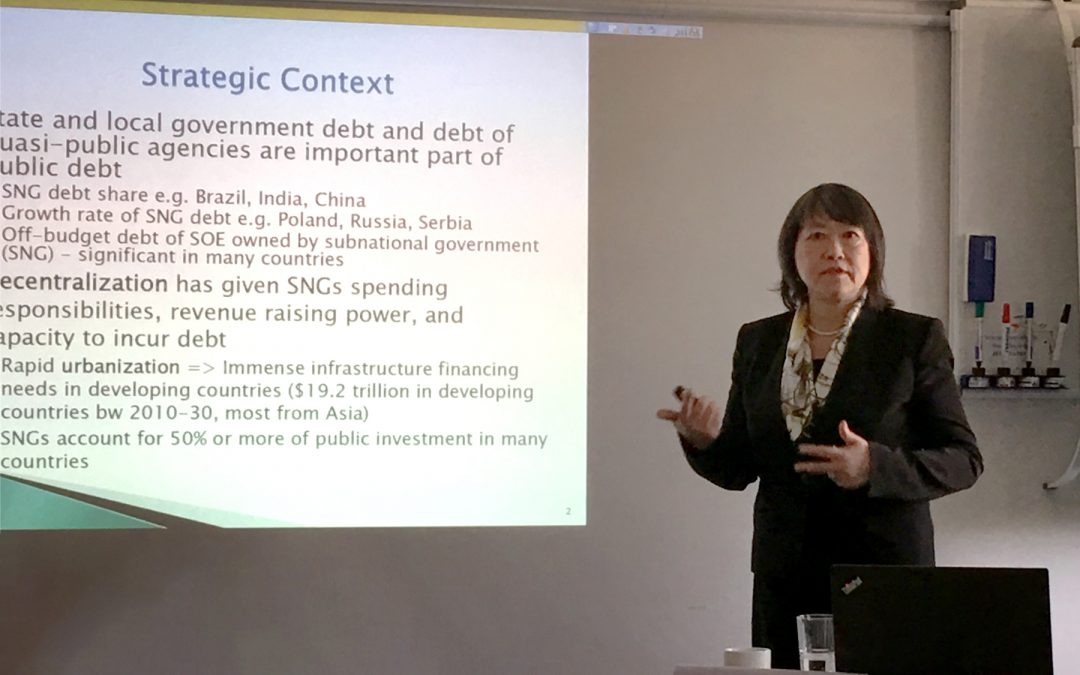 Lili Liu speaks at a high-level workshop in Berlin organized by the German Federal Ministry of Finance in May 2018.

How a government manages its finances has a substantial impact on the lives of the people that it serves. Whether it is transportation, utilities such as water and electricity, education, hospitals, or emergency relief, the health of a government’s financial system, be it at the national or local level, helps determine how it delivers the essential public services that people depend on every day. As the global lead on intergovernmental finance at the World Bank, Rackham and Barbour Scholarship alumna Lili Liu (M.A. ‘85, Ph.D. ‘91) worked to help ensure that governments around the world can continue to meet those needs.

As a Ph.D. student in the U-M Department of Economics, Lili had always been interested in how economic policy could impact the world in practical ways. Through an internship with the World Bank, she found an organization with the same aim, one that would come to define her career and allow her to help improve the lives of people on nearly every continent.

“One of my goals from the beginning was to work with the World Bank, a premier global institution,” Lili says. “It’s a dynamic place with colleagues passionate about helping countries achieve inclusive economic growth and reduce poverty, and it’s a place with a lot of opportunities that allows you to find and build on your strengths.”

Following her internship, a second opportunity to work with the World Bank emerged. Lili worked on a research project examining the impact of Chile’s eight-year trade liberalization and market reform effort on its manufacturing productivity, and her analysis would go on to form the bedrock of her dissertation. A painstaking, intensive process in the days before powerful computer modeling technology, Lili’s research concluded that the reforms encouraged much needed productivity and economic growth in the South American nation.

After her research, Lili moved on to country operations at the World Bank, where she found the policy work would be most impactful. Her extensive operational work included four years as a senior economist for India, leading a World Bank team to engage with the chief minister and other senior officials of a southern state on its public finance reform and infrastructure investments.

It was her work on India that led her to the complex issue of intergovernmental finance—the interaction between national, state, and local government financial systems.

“Intergovernmental finance connects to many critical issues,” she explains. “Government expenditures, taxation, borrowing, and more. I gained firsthand experience of how these issues affect people’s lives. If a city goes bankrupt, for example, services like firefighters take longer to arrive—if they do at all.”

When the World Bank began looking for someone to lead a global advisory service on intergovernmental finance, Lili’s operational experience on India, a federal country of complex intergovernmental fiscal systems and of profound fiscal reforms, made her a natural choice. With her leadership, the team searched for common challenges and reform experiments across countries. The research culminated in a book she co-edited, Until Debt Do Us Part: Subnational Debt, Insolvency, and Markets, which covered 11 major economies. Drawing on this research, she advised World Bank operations in more than 25 countries, spanning five continents.

In addition to conducting research and providing advice, Lili worked to bring together government officials, capital market players, and practitioners from around the world at conferences where they could interact with and learn from one another.

“When private businesses run into financial trouble, they can liquidate their assets to pay off their debt under a court-led restructuring plan,” she says. “However, you cannot dissolve an elected government, and you cannot liquidate essential public assets such as schools or fire stations. So these crises require fiscal adjustment and debt restructuring so it doesn’t happen again. We worked to help countries regain healthy public finances so they could better serve their people. In many ways, public debt restructurings differ from private ones, requiring careful consideration of a country’s institutional and historical context.”

Since leaving the World Bank a few years ago, Lili has continued to be active in consulting and conference speaking, including speaking at a policy workshop in Berlin organized by the German Federal Ministry of Finance. Most recently, she wrote a chapter for the newly published Asian Development Bank’s book The Sustainability of Asia’s Debt: Problems, Policies, and Practices.

Lili credits the Barbour Scholarship as an important part of the educational experience that helped launch her rewarding career.

“The Barbour Scholarship is very generous, and it freed up my time to focus on my studies,” she says. “It was invaluable in supporting my degree.”