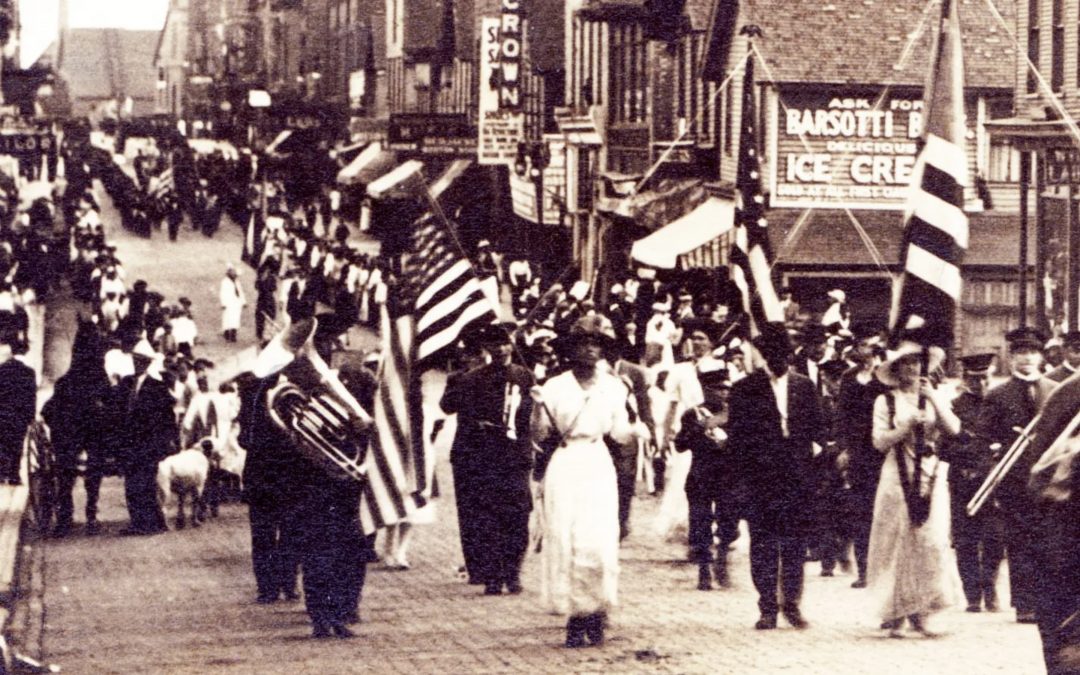 For over a century, copper was the lifeblood of Michigan’s Keweenaw Peninsula. A curved finger of rocky land jutting from the state’s Upper Peninsula into the icy waters of Lake Superior, the peninsula—colloquially known as the Copper Country—was home to an industry that at one time produced 95 percent of the copper in the United States. Miners delved over 9,000 feet underground to extract over 11 billion pounds of the red metal.

This industry, the first mining boom in American history, brought considerable wealth to the peninsula. Managers and mine captains built impressive mansions, many of which still line the streets of the region today. Towns sprang up along the spine of the peninsula, following the copper veins, and tens of thousands of new workers and their families, including many immigrants freshly arrived from Britain, Scandinavia, and Eastern Europe, filled them.

The work was long, arduous, and dangerous. Fires, explosions, tunnel collapses, and machine mishaps all took a toll on those who toiled underground, and the losses in turn took a toll on the families who lived above. As was the case in many other industries of the time period, those who shouldered the physical risks and hardships saw little of the financial rewards. By the early 1910s, tensions between workers and management reached a breaking point, and in 1913 the workers organized into a chapter of the Western Federation of Miners (WFM) and voted to strike.

The strikers and their supporters frequently held demonstrations, marching in the streets of Calumet, then called Red Jacket, in support of their cause. One woman, clad in a simple gingham dress and waving an American flag over her head, was routinely seen at the head of the column—Anna Clemenc. Founder and president of the local WFM Women’s Auxiliary, Clemenc (pronounced ‘Clements’) became a hero of the strike, often referred to as an American Joan of Arc. In addition to the demonstrations, she planned community events, fundraised for the strikers and their families, and helped organize the workers. She was also in the thick of the conflict, at one point serving a 10-day jail sentence for fighting a non-striking miner. Her legend and leadership saw her eventually inducted into the Michigan Women’s Hall of Fame in 1996.

Though she was celebrated in her day, Clemenc’s story has often been left by the wayside. In 2019, however, novelist and Rackham biological anthropology alumna Mary Doria Russell (Ph.D., ’83) published The Women of the Copper Country, which brought a fictionalized version of the life of Clemenc, renamed Annie Clements for ease of readership, to a whole new audience. And Júlia Irion Martins, a Ph.D. candidate in the U-M Department of Comparative Literature, spent the spring and summer of 2021 developing a statewide reader’s guide to help people better understand and engage with the labor leader’s story.

Every year, the public humanities council Michigan Humanities sponsors the Great Michigan Read, a reading program in partnership with libraries, schools, book clubs, and other nonprofit organizations highlighting the humanities themes of a selected Michigan-centric book. Upon selecting Russell’s novel for the 2021–2022 program, Michigan Humanities partnered with Rackham’s Doctoral Intern Fellowship Program to create a fully supported internship to give a graduate student the opportunity to apply their expertise in creating the reader’s guide that would form the centerpiece of the program. It was an opportunity Martins hoped would not only help her improve her research and public engagement skills, but also teach her about the state in which she now lived.

“They announced The Women of the Copper Country as the Great Michigan Read the day I went in for the interview,” Martins recalls. “It was exciting to see it was a novel about a strike, especially coming out of the GEO strike here at U-M a few months earlier. It was going to help me learn about the history of organized labor in a state where I’m actually part of a union.”

Her interest and academic skills landed her the position, and that was when the real work began. Martins was tasked with creating a reader’s guide, appealing to both high school students and the general public, which would lend context to the fictionalized account of the novel and help reconcile it with the historical record. Working with her colleagues at Michigan Humanities, Martins wanted the guide to engage with the book’s themes of immigration, urban planning, the architecture of the Keweenaw, the history of union labor, and the involvement of women in that arena.

These were issues, Martins found, that could not be engaged in an abstract sense. She had to go to the original sources, and that meant the Colorado native would have to travel to the farthest northern region of Michigan.

“One thing I realized while reading the book was that anyone not actually from Calumet has no concept of how important it was and what a dense, cosmopolitan city it was,” she says. “Without knowing the background, I was puzzled by all the wealthy East Coasters who were living there. I realized I had to go there, talk to the people who live there, and read the primary sources.” 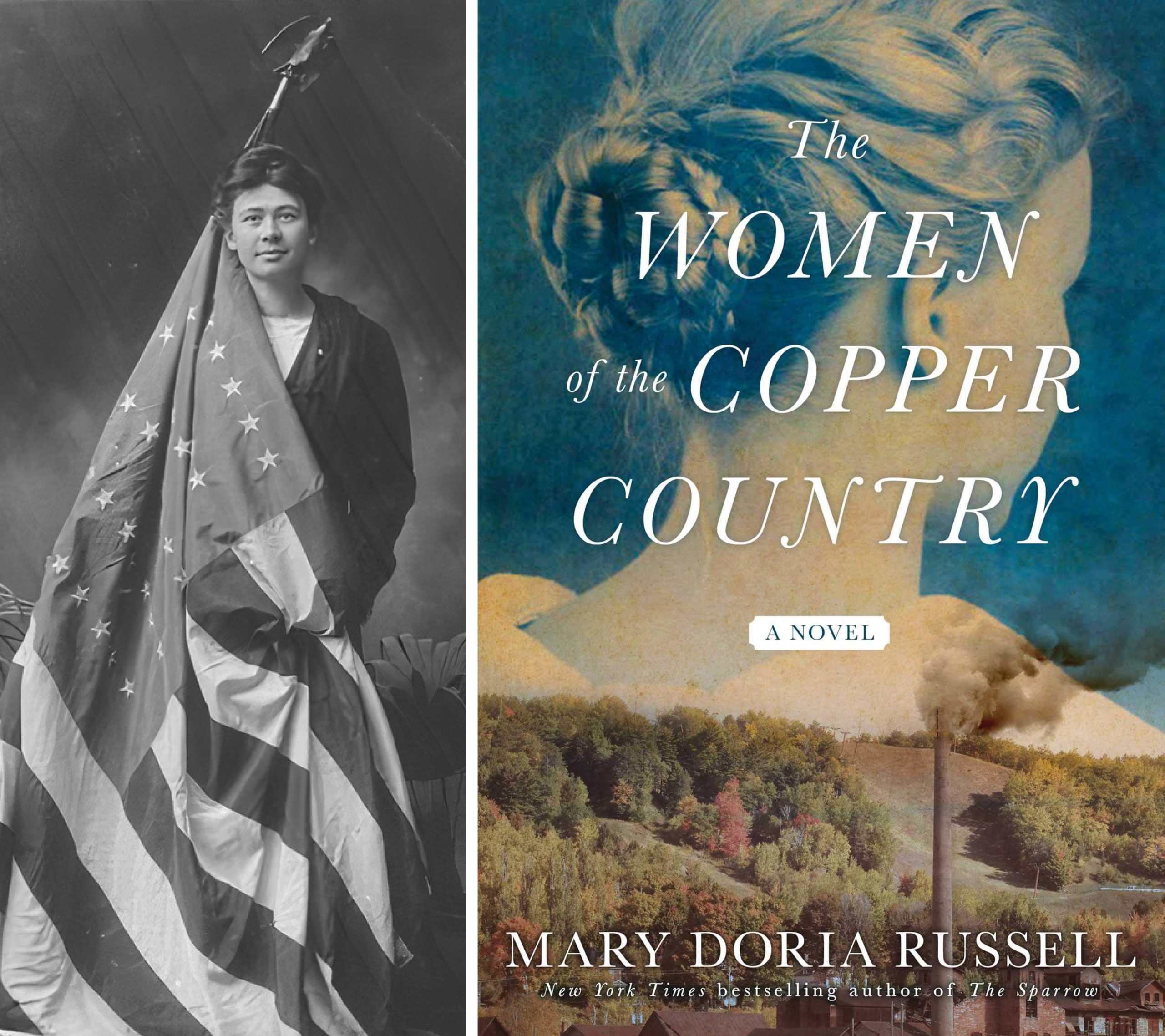 Left: Anna Clemenc holds her iconic American flag. Prior to the strike, she worked with a local church to help crippled miners. (Credit: Keweenaw National Historical Park); Right: Mary Doria Russell’s novel retells the story of the 1913 Copper Country Strike through the eyes of Clemenc.

A Sense of Place

When Martins first arrived in Calumet, she began by wandering. Once boasting a population density to rival Manhattan, the village is home to just over 700 today, but many of the grand homes, businesses, and public buildings from its heyday remain. Some of these, former office buildings of the Calumet and Hecla Mining Company, are now in the possession of the Keweenaw National Historical Park, staff of whom Martins encountered while exploring the site.

Her timing, it turns out, was perfect. The National Park Service (NPS) staff had just completed their first in-person meeting since the beginning of the COVID-19 pandemic, and a chance encounter with Ellen Schrader outside of the park’s headquarters led to the key that would unlock Martins’s entire research project.

Schrader introduced Martins to NPS historian Jo Urion Holt and archivist Jeremiah Mason, who together took her on tours of the national park’s exhibits—then closed to visitors due to the ongoing pandemic—and of the town of Calumet itself. They then directed her to the Copper Country Historical Collections held at nearby Michigan Technological University, which proved essential to producing the reader’s guide.

“Without wandering around, I would never have met any of them,” Martins says. “They were amazing; they knew everything and gave me tons of reading material. It was an encounter that reminded me of the importance of being in a place. I couldn’t have written the guide without their time and knowledge.” 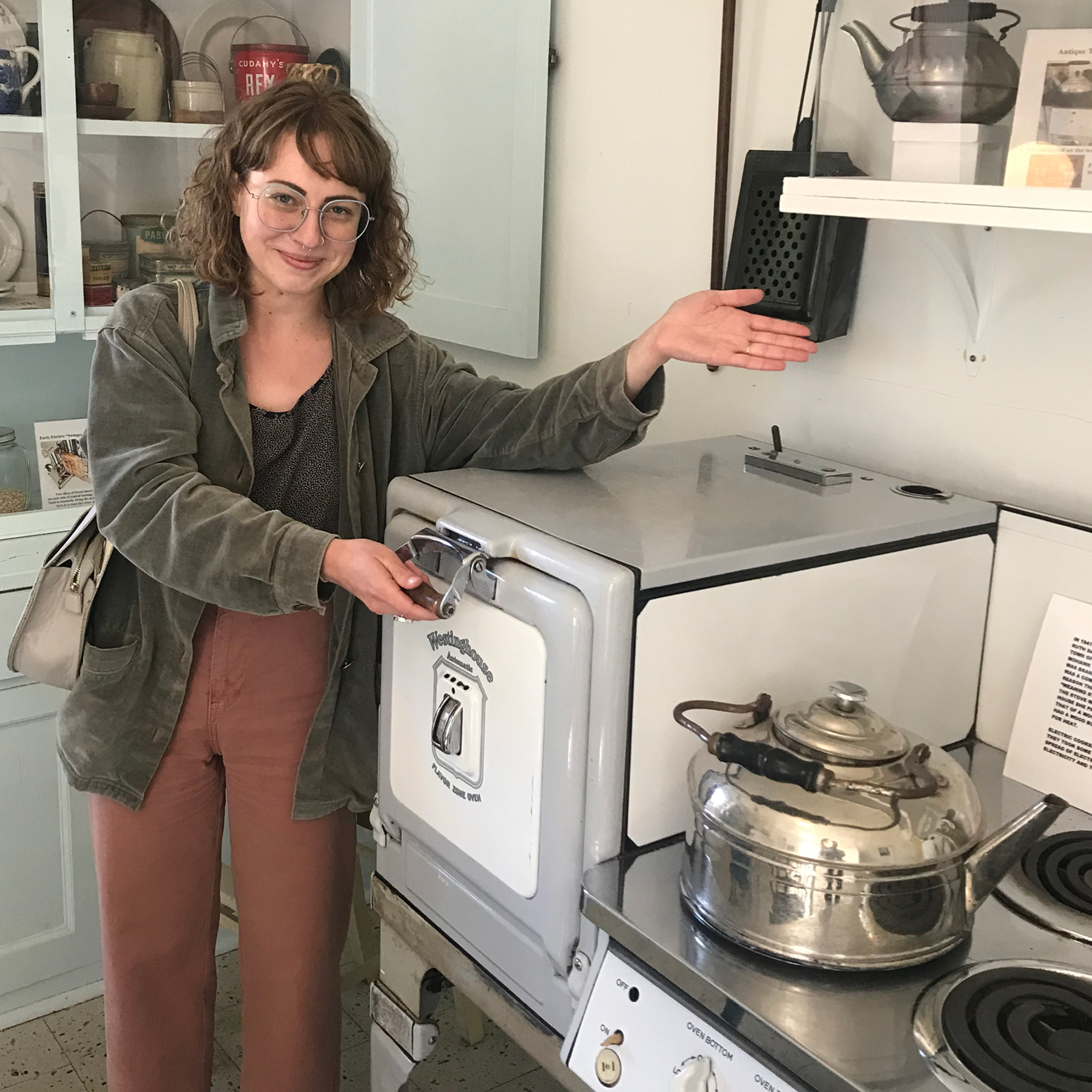 Martins, here visiting one of several historic lighthouses dotting the Keweenaw shoreline, spent time touring the peninsula’s buildings and towns to get a tangible sense of the novel’s historical context.

Prior to her Rackham fellowship, Martins had never conducted archival research, but it was the book itself that guided her approach. When she first came to U-M, she came with an interest in the architecture featured in Brazilian and Argentinian films, and The Women of the Copper Country’s opening chapter begins with a description of Calumet and Hecla General Manager John McNaughton’s mansion and his housekeeper preparing his breakfast. That image of domesticity, charged with the important role of women like Clemenc, gave Martins her entry into the history of the region.

“It was surprising to me to realize just how present and contemporary the historical questions of labor, migration, and the organization of labor and capital felt,” she says. “Obviously there are major differences, but there are also similar patterns. I have a new appreciation for the research that goes into writing historical fiction and the archival research necessary to make that history feel alive.”

As a scholar, her time in the Keweenaw helped Martins gain confidence in her ability to posit historical research questions, relate them to literary movements, and express them to the general public. And as a person, it helped her gain an appreciation for being present in a place and being open to the spontaneity and surprises that come with it.

“This was a formative experience for me in thinking about history,” she reflects. “It helped me to have a sense of both broad American history and the reach of local history. That’s especially true when you live in a college town, which is a very transitory existence. It’s easy to forget, and to feel like you’re just passing through, but it’s worth learning about that history anyway. I feel like I live here now, and that’s made me a better community member.”

In the end, Martins credits the project with improving her ability to engage with historical research questions and how they relate to literary movements.

“I’m more confident in my ability to both ask and answer historical questions,” she says. “This project also reminded me that as a Ph.D. student, we read, write, and explain things for a variety of audiences, whether they’re 10th graders or retirees. That’s a valuable skill, one that can help us communicate with and meet the needs of different audiences.”

In addition to her doctoral intern fellowship, Martins is the recipient of multiple Rackham Conference Travel Grants, enabling her to attend the Spanish Language Women’s Literature Conference in the Dominican Republic in 2017; the Latin American Studies Association Conference in Barcelona, Spain in 2018; and a documentary film conference in Los Angeles, California, in 2019. She has also received a Rackham Doctoral Intern Fellowship to work at Brazilian publishing company Editora Fósforo in Fall 2022, and a Rackham Humanities Research Fellowship for Winter, Spring, and Summer 2023.