While packing my one backpack for a conference in Europe last summer, I received an email from the College of Engineering. It said that Wilson Golf is looking for contestants for their driver design competition to air as a reality television show on the Golf Channel where the winner receives the largest prize in Golf Channel history, $500,000. I couldn’t believe my eyes. First, I love to golf. I grew up in a farm town in Nebraska, where the course I golfed on had sand greens (yes, the greens were sand instead of grass).

I have never considered myself a good golfer, especially a Golf Channel quality golfer, but being an average golfer allows me to know a lot of the problems golfers have driving a golf ball. But knowing what golfers are struggling with is only one piece of the problem (any golfer, pro or especially amateur, could tell you they want to drive the ball straighter and farther). The second piece to the puzzle is how to solve the problem, which leads me to my second passion: engineering. Growing up, I have always loved designing, fixing, and engineering things, whether it was fixing equipment on the farm or trying to make a multi-stage rocket out of bottle rockets. Now I am in my fifth year as a Ph.D. student in Aerospace Engineering. My research involves modeling the aerothermodynamics of high-speed flight (upwards of 5 miles per second). As of this writing, I still have not seen a swing speed this fast in golf, but aerospace engineering and golf are still intertwined. One historical example is adding dimples to the golf ball to create a more turbulent boundary layer, which helps keep the flow attached reducing the drag on the ball allowing it to fly farther. Nowadays, if you see any commercial selling golf drivers, you will see how their shape is more aerodynamic allowing you to crush the ball farther than your friends. So long story short, between my love of golf and aerodynamics this seemed like the perfect opportunity. But unfortunately sometimes the best opportunity does not come at the best time. 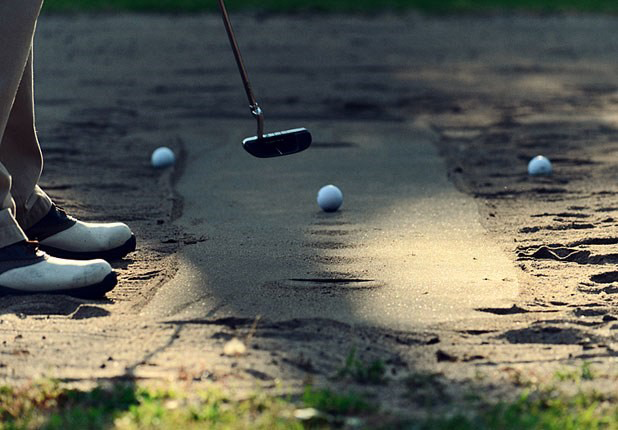 I forwarded the message to my friend and fellow golfer, Kevin Neitzel, who is also a fifth year Ph.D. student in the Aerospace Engineering department and even knows more about aerodynamics than me– having industry experience at Beechcraft, Ford, and CD-Adapco (although I would argue I am the better golfer). Being involved with golf actually paid for Kevin’s undergraduate at University of Michigan since he was an Evans Scholar. I told Kevin, who fatefully was also attending the conference in Europe, “Man, this would be perfect for us… too bad it’s due while we are in Europe,” as the application was due mid-trip. But we couldn’t stop thinking about the challenge. On the flight, having nothing else to do, we brainstormed different ideas for our driver design to see what we could have submitted. First, we agreed that golfers want to hit the ball straighter and farther. How can we use our expertise, aerodynamics, to help the golfer swing the club faster and hit the ball straighter? Swinging the club faster is straightforward, we can reduce the aerodynamic drag. But as mentioned before, this is what every driver manufacturer is trying to do. Wilson is looking for a truly innovative idea; something game-changing like the switch from wood to metal drivers. So our innovation would have to be helping golfers hit the ball straighter. Sketching out ideas out on a napkin and drawing upon techniques from Formula 1 vehicle and airplane design, we came up with an idea where the aerodynamic forces on a golf club would help straighten the clubhead up at impact, resulting in straighter shots. If the club is a little open, this design will act to close the club; or if the club is closed, it will act to open the club. Square(r) contact every time! 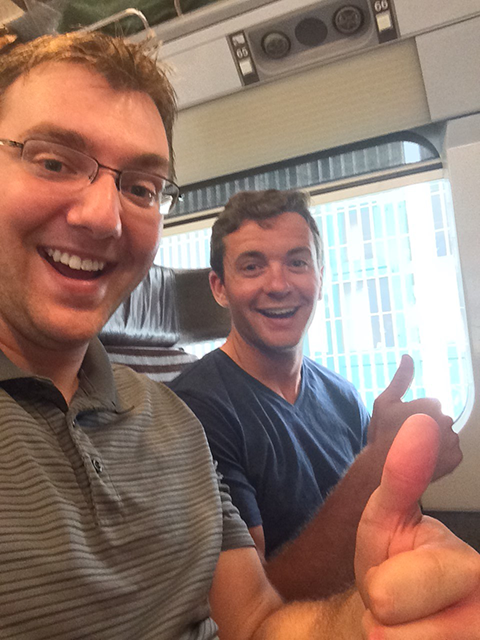 Kevin (left) and I traveling in Europe.

All right, now we just had to submit our idea via video submission. We quickly found out that communicating our idea on camera to a general audience is much more difficult than sketching our idea out to each other. We first tried in London but we could not even get one good take, each attempt ended with misspeaking and a lot of laughing. We kept procrastinating (graduate student specialty) until the last day of submission where we were in Copenhagen. We ended up filming in the alleyway behind our hostel and finally got a take okay enough for submission. We ended the video with a pan-around of the alleyway we filmed in.

Filming in the alleyway!

Fast forward one month and a safe return to the Ann Arbor, we hear back from the producer letting us know that we made it on the show and he also had a question for both of us. He asked, “If we could golf with either Jack Nicklaus or Jim Harbaugh, who would it be?” I answered Jim Harbaugh but Kevin answered Jack Nicklaus because he is the greatest golfer of all-time. The producer gave Kevin a hard time that he would rather golf with a Buckeye than a Wolverine. He also informed us that we would be called “Team Michigan” on the show. We were very excited for the opportunity to represent the university in a way that usually only athletes get to. We were going to be able to represent our department, college, and university on national TV. 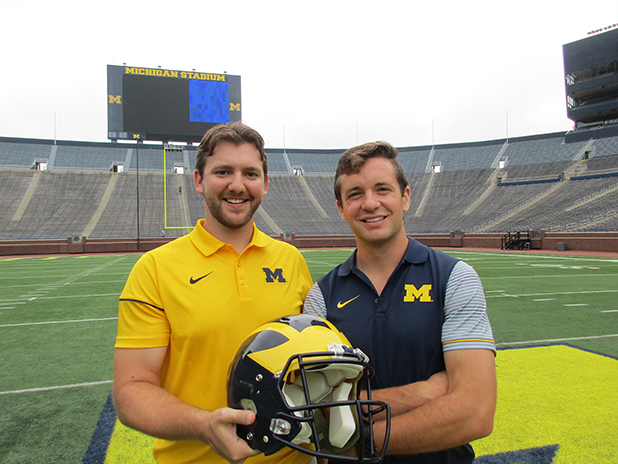 Kevin and I at the Big House

Filming for the first episode started last November at Wilson headquarters in Chicago. Golf Channel sent us a camera to film us packing, around campus, and also driving to Chicago. It’s stressful enough driving in Chicago, let alone while on camera! Arriving at the hotel, we met the crew (“Hey, you’re the guys who filmed in an alleyway in Europe”) and the other finalists. The actual filming started the next day and it was like nothing we have ever done before. We had to bring different changes of wardrobe (tried to wear as much Michigan gear as possible), get our makeup done, and filmed from 8 am to midnight each day that week. One of the hardest things was trying our best not to look too tired, hungry, or angry late at night! The focus of the first episode was to pitch our idea to the panelist of judges (including the intimidating, legendary Chicago Bears linebacker Brian Urlacher) “shark-tank” style. Being doctoral students, Kevin and I have experience presenting our work to a large audience, but giving a presentation on national TV was a whole new ball game. We practiced our pitch a couple of times the night before in the hotel room. We tried to keep the pitch memorable while also communicating our idea without being too “science-ey”. We probably did not give our pitch until 11 pm but when we finally went there were probably at least ten cameras on us. Kevin and I had a lot of fun giving our pitch, and it was one of the most memorable things I have ever done (I think the judges enjoyed it too)! Check out the footage and see for yourself.

Spoiler alert: we did not get cut after the first episode, which was our biggest fear. Please tune in Tuesday, October 25th at 10 pm on the Golf Channel to follow our journey as we try to advance past the final 6 to get closer to the $500,000 and try not to embarrass ourselves on national television!