Alumni Conversation with David He, Ph.D.

“Whatever you do, do it with passion and the idea of making a contribution.”

Rackham alumnus David He shared his career path and lessons learned along the way with Rackham students last week in the first session of the new Alumni Conversation series. Dr. He earned his Ph.D. in Physics from U-M in 1990. After finishing his doctorate, he spent two years at the University of Minnesota exploring a future in academia before transitioning to industry. He began that career with a short stint at Siemens and a longer one at General Electric, both in the United States and in China. He then moved to Bain Capital before beginning his current role as Partner at PAG Asia Capital.

This brief summary of the conversation showcases the valuable insights Dr. He shared with the group of Master’s and Ph.D. students.

On application of a physics Ph.D. in industry
People ask me how I connected a Ph.D. in Physics with a career in private industry and I tell them that every step of the way, I had one foot planted inside my job and one out. In between point A and B, it is valuable to do something well and prepare yourself to take the next step. Each role had a legacy that led me to take the next step. Every step I tried to make some contribution and do it with all my heart. You need to realize that what you do today has a lot of value to your future.

Everything you learn in life can ultimately benefit you. At each point, ask yourself ‘What have I learned?

How do I make myself more valuable? How do I do my best?

On the value of his Ph.D.

If I could go back, I would do the exact same thing. All the skills and capabilities I gained by doing my Ph.D. in Physics were extremely valuable for what I would do later on. I was in experimental physics, so my work with all kinds of lab equipment helped me when working with manufacturing teams. My use of modeling in the lab was extremely valuable in my work at GE. The problem solving skills I developed were useful throughout my career. These learning experiences, even the failures, became an important part of my life. 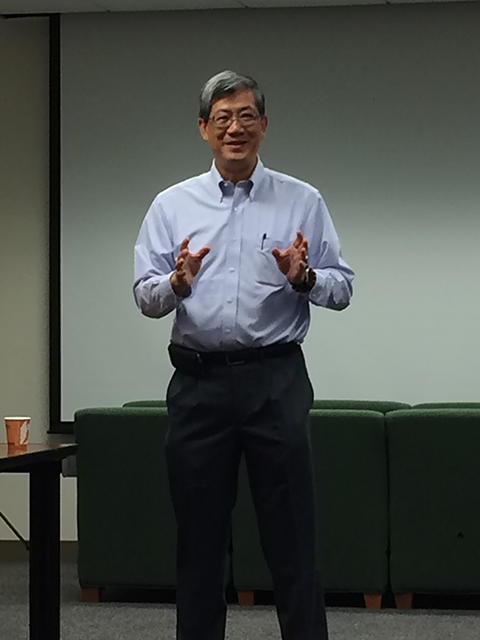 Alumni conversation with David He.

On being an international student
As an international student, I was willing to mingle with everyone, not just with other Chinese students. That was a tremendous help. To be successful in the global workplace, you need to understand things beyond your own experience. That’s where a deep exposure to diversity can make a big difference.

I remember when I was a grad student, the Chinese students had a number of clubs, one of which was the auto club. That probably means something different to students today, but back then all we could afford were these really old cars, and old cars need a lot of work. We got together to learn how to fix cars, change spark plugs and things like that. We also had a bicycle club and a photography club, even with competitions and exhibits. In the 80s there was a lot of curiosity across campus about China and Chinese students.

On choosing a career
You need to determine what matters to you. What are you passionate about? It’s ok if you don’t know, but you need to work on it. Explore for a while, then settle into something. It takes time to do something really well. You shouldn’t limit yourself to your topic. Be open-minded, don’t make assumptions. You’d be surprised by how many interdisciplinary opportunities there are.

Look for formal and informal mentors. I always sought out people I truly respected who were willing to help. When you see them, put yourself in a position to learn from them. Don’t be shy.