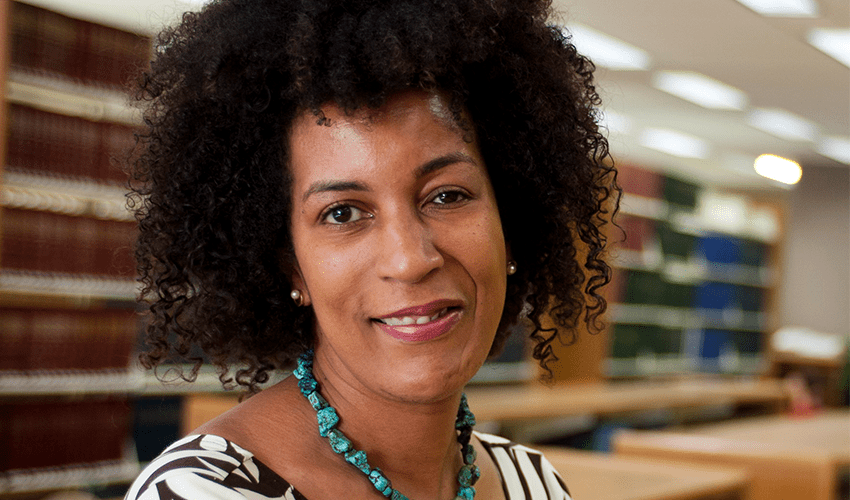 As a social justice activist and scholar raised in 1970s Detroit, Jeannine Bell is no stranger to the challenges faced by marginalized populations today. Currently a professor at the Indiana University Maurer School of Law, Jeannine focuses on the systemic racism that permeates the layers of American society. Her latest book, Hate Thy Neighbor: Move-In Violence and the Persistence of Racial Segregation in American Housing, explores the factors behind continued neighborhood segregation, despite the efforts to combat it.

After completing her undergraduate degree at Harvard, Jeannine began her doctoral studies in political science at the University of Michigan. This, she says, gave her a solid foundation on which she could base her research, which she carried into professorship. She also completed her master’s degree, as well as her juris doctorate before defending her doctoral dissertation, which she completed during her first year as a law professor.

Jeannine’s dissertation, which later evolved into her 2002 book, Policing Hatred: Law Enforcement, Civil Rights, and Hate Crime, focused on how police detectives use their discretion to enforce laws against hate crimes. While conducting her research in the field—a police detective unit in a large city—she spent up to eight hours a day during both day and night shifts asking questions and observing day-to-day operations. After a couple months of fieldwork, one of the detectives with whom she worked closely asked Jeannine if she had the kind of job that allowed her to spend so much time doing research. Jeannine, a Rackham Merit Fellow and Susan Lipschutz Award recipient, explained that she did not and her research was made possible through grant funding. The detective responded, “Well, what do they get for you doing this work?”

In that moment, as she thought, “They don’t get anything actually,” it dawned on her just how lucky she felt to pursue her degree in a place that didn’t think twice about supporting important research and encouraging students to follow their curiosity.

Policing Hatred is now a part of the Critical America Series at the NYU Press.

It was during her time as a Rackham student that her research interests truly started to take form, and she was able to thrive, not only as a scholar, but as an active member of her academic community.

She fondly recalls her membership in Students of Color of Rackham (SCOR). The organization, comprised of graduate students from all different departments, served as a safe space for her research interests. She received travel grants that allowed her to present her research and make and maintain connections with organizations and institutions in which she has since taken leadership roles. These networking experiences eventually led to Jeannine attending conferences hosted by the Law and Society Association, an organization of which she became treasurer and is now a co-editor of the Law & Society Review.

Now, in her thriving career as a scholar and as an educator, Jeannine is in the data analysis phase of an ethnographic project which focuses on police trust, specifically how minorities and other marginalized people understand and experience their relationship with law enforcement. She also provides her professional opinion and content in the form of op-eds, press interviews, and reporter education.

Jeannine continues to support Rackham students and the University of Michigan, particularly because of its dedication to diversity, equity, and inclusion. She enthusiastically encourages fellow alumni to contribute in any way possible, as it is crucial for students to travel to conferences, pursue research opportunities, and get to know as many people in their fields as they possibly can.

To current graduate students, she advises, “Take advantage of everything Rackham has to offer: the resources, both human and knowledge, are critical to moving you along in ways that are so far beyond what you can imagine.”