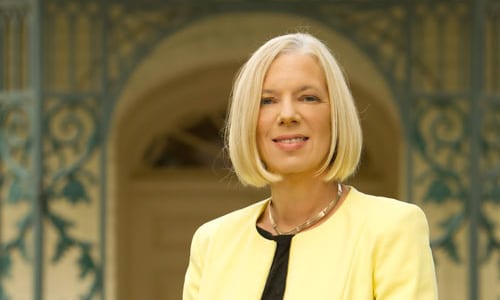 When asked why she came to U-M, Debbie says, “As an undergraduate, I was working in a hospital and in what later became an HMO. I wanted to pursue the field somehow, and my faculty told me the best Health Administration programs were at Michigan, so that’s where I went.”

Her education at U-M evolved somewhat unexpectedly. She explains, “I had a fantastic professor teaching economics in my medical care administration Master’s program, Father Bill Neenan, and he came to me one day and said he wanted to start a Master’s degree in Applied Economics. He thought I’d love this and offered to fund it – if I’d be a guinea pig for a new program. So I became the first student to receive an M.A. in Applied Economics through Rackham. When I was done, he said I might as well stick around for a Ph.D., since I’d already done most of the coursework.”

Like some Rackham alums, her experience as a graduate student had its significant challenges. Outweighing much of that were the shining relationships that developed during these years. “A faculty member took an interest in my career and led me to master’s and Ph.D. completion. I was also very close to my doctoral dissertation advisor, who is now at UC – Irvine, and we are still in touch regularly.” These experiences shaped how she relates with her students. “I treat students how I would want to be treated.”

“I remember very, very close friends who were doctoral students and the wonderful things we did – particularly, the study group I had during my doctoral years. One member was an officer in the Air Force pursuing a Ph.D. so he could teach at the Air Force Academy. This was an important diversity experience for me, given continued bad feedings on campus due to the Vietnam war. He brought a lot of understanding on my part, and I learned a lot from him that I carry with me to this day.”

“I never expected to be a college president. I always thought I’d be a scholar; that’s how I started.” Debbie spent 9 years as a faculty member at the University of North Carolina – Chapel Hill. “I was recommended for full professor and took that position at Indiana University when following my husband there. I spent 11 years at IU – Bloomington, evolving to Department Chair first, then much to my surprise to Vice Chancellor of Academic Affairs.” She says she did a lot of publishing during those years and learned to teach undergraduates as well, but supervising and mentoring graduate students was what she really loved to do.

Debbie was the Vice Chancellor and Provost at Syracuse University for seven years. She then spent a few years at the University of Rochester, working on a strategic plan for the new university president. “Then Claremont called.”

Encouraging current students who may be concerned about dual faculty families, she says, “Moving around worked for us. We were always able to get two very good academic jobs. You can make it work.”

While leading a University has taken her out of the classroom, she stays as involved in her field as she can, serving on the board of directors for two hospital systems and previously on the board for Blue Cross Blue Shield. “These roles came out of my expertise in economic aspects of healthcare and my position. I was the first healthcare person on any of these boards. The message to students and future students is anything is possible. You find yourself in places you never expected to be.”

In her career in Health Economics, where getting grants was an expectation, she has been the principal investigator on $100 million in grants. “The greatest gift was that I learned early on how to get grants, not only from faculty members and my Ph.D. committee, but later on as well. I did some work after my master’s degree at a private foundation, and it was there that I learned how one does a good grant.”

Debbie has been back to Ann Arbor one or two times and mostly enjoys exploring campus and how it has changed over the years. “As a jock, taking in a football game would be a lot of fun; I haven’t been since I was a student. Watching the U-M basketball team in the Final Four last year was a lot of fun except they were playing Syracuse, who I also root for! Debbie mentions that her husband and son are OSU fans. When asked what colors she wears that last Saturday in November, she proudly proclaims, “Maize and blue, for sure!”