Home » Discover Rackham » Diversity, Water, and the Future of Work: A Conversation with Earl Lewis

Diversity, Water, and the Future of Work: A Conversation with Earl Lewis 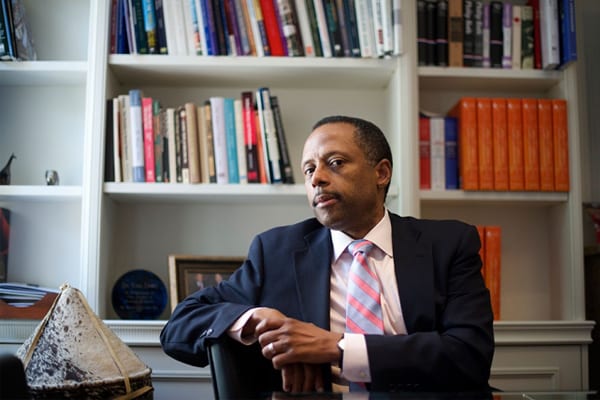 Former U-M Vice Provost and Dean of the Rackham Graduate School Earl Lewis is returning to the University of Michigan as the director of the soon-to-be-established Center for Social Solutions. Lewis spent 15 years at U-M as a faculty member before becoming provost and executive vice president for academic affairs at Emory University and then, in 2013, president of The Andrew W. Mellon Foundation. We talked to him about his pending return and the value of a project like this on our campus.

What makes the University of Michigan a good place for a project like the Center for Social Solutions?

Earl Lewis: So, I know Michigan at a fairly specific level, having spent 15 years on the faculty. But more than that, I also know that in these three clusters of work—one dealing with diversity and race, the second cluster dealing with water, and the third cluster dealing with the dignity of labor in an automated world—when I had preliminary conversations with key leadership at the university, I was able to identify not only those key leaders who were interested, but others across the university who are already doing work. And so from my perspective, knowing something about the institution, but also knowing that there was human talent already engaged in the conversation and that human talent most likely can be brought into a broader set of conversations, really appealed to me. And while this project and the center will be anchored at the University of Michigan, I’ve also been in contact with scholars and researchers and institutions across the nation. So I’m trying to really leverage what we can do locally by connecting it to what’s happening nationally.

You mentioned the three areas of focus for the center; could you talk a little bit about how you reached those three areas?

EL: For the last five years, I’ve served as the president of The Andrew W. Mellon Foundation, and on the diversity side we launched a multi-year project called Our Compelling Interests: The Value of Diversity for a Prosperous Democracy. I’m actually bringing that project with me. That project has already produced two volumes—the third one is in development and should be out in the fall—and it’s a book series done in partnership with Princeton University Press. So I settled on it in part because I’ve been working on it and I will continue to co-lead it with Rutgers-Newark Chancellor Nancy Cantor.

The race component is actually very specific, as well. On the Monday prior to the 2016 election, I had a convening at the foundation of academics, theater professionals and producers, leaders from public media, museums, and social-justice institutes, and the conversation there was, “How do we begin to address the history of slavery not only in the American past but also in the American present?” And so the project around race is actually to take that conversation that we had almost 16 to 18 months ago and really try to activate it. How do we begin a national conversation about the history and legacy of slavery? And how do we do that by actually bringing together 20, 30, or 40 different kinds of institutions and organizations nationwide to work on this in collaboration?

What does it mean to work, and what happens for people that comes from the experience of working, even if we can free them from the necessity of working?

I’m also an American historian, and it just so happens that I will be the president of the Organization of American Historians for the 2018–2019 academic year, and 2019 is also the occasion of the 400th anniversary of the importation of the first African peoples into Jamestown, into the system that eventually evolved into the institution of chattel slavery. So there’s a confluence of factors, partly driven from my own scholarship and knowledge, partly reflecting a set of questions that others are asking, and partly reflecting my role as president of the Organization of American Historians.

The second part, the water question, is also driven by a very specific question: “Can we come up with a regional demonstration project that can be scaled nationally and perhaps exported globally to move water from flood-prone areas to drought stricken areas?” Is there a way? Engineers have been telling me for more than a decade now that it’s not an engineering problem, but it’s a regulatory problem, it’s a fiscal problem, it’s a social problem. So can we marry the engineering technologies with a set of social-policy solutions that would allow us to actually come up with a workable demonstration project that can be scaled? That’s really the water piece, and there are key people at Michigan who are interested in this question.

In terms of the final area of focus, I wrote an essay last year on future work. I realized with automation there would be new technologies using artificial intelligence, machine learning, and capabilities in a whole range of new tools that will free some humans from certain kinds of work. What comes behind that? And I think no matter the solutions that we develop, we also have to ask a series of questions about the dignity of labor. What does it mean to work, and what happens for people that comes from the experience of working, even if we can free them from the necessity of working? So I was prompted to move on this one in part because of a series of questions I’ve been asking over the last few years about future work.

Can you talk a little more about the Our Compelling Interests book series? How did that begin? Is it an ongoing project?

EL: The series actually originated out of a conversation here at the foundation that began roughly in December of 2012, prior to my appointment or at least prior to my moving into the role of the president of the foundation. I was at that meeting, which had been called to consider the implications of the Fisher case involving the University of Texas. Again, the legal question turned on the continued use of race as a variable in admissions decisions. That meeting was revealing in two ways. One, we had a number of smart people who had tremendous experience sitting around the table, but it became readily apparent that they knew less about the broader literature on diversity and its contributions to a prosperous democracy than I would have imagined, given some aspects of their day job. And that took me back to the Grutter and Gratz cases at the University of Michigan, in which I thought that Michigan did an exemplary job of actually showcasing social science and humanistic research, and putting that out there for people to see that this is not a feel-good story—this is actually really wedded to research in a variety of domains that are important. In fact, in some ways, the two Michigan cases were the most well-researched cases that I’m aware of in recent years and harken back to the Brown decision in the way in which social scientists, historians, and others were brought in to help provide the evidentiary base for Brown.

We had a number of smart people … but it became readily apparent that they knew less about the broader literature on diversity and its contributions to a prosperous democracy than I would have imagined.

After Grutter and Gratz, it became more difficult to actually extract the material regarding the cases from the Michigan website. Coming out of this meeting, it became obvious that perhaps this was the time for some entity or collective to begin to identify the best researchers on specific topics and make that research available to a broader set of publics, and the foundation was told that day that perhaps it could do something that no one institution could do. So, we took it on after I became president both, in partnership with Nancy Cantor, who is my co-convener on this overall project, and a pretty stellar advisory board. We have laid out a series of volumes and other related initiatives, so volumes one and two have appeared, volume three, as I mentioned, will be on religion and will appear in the fall, volume four on the merit of testing is due the year after, and then we have volumes five, six, and seven in the pipeline dealing with aspects of higher education.

So, this is going to be an ongoing project for quite some time then?

EL: We’re imagining that this will certainly go on for the next five years, and most likely beyond that, assuming of course the availability of funding.

How can students, graduate students in particular, take the opportunity to engage with the center for social solutions?

EL: Once we move from concept and floor plan to actually having human beings there, we will do several things. One, we will be convening some kind of advisory board as we think through some of these projects. Two, we will eventually pull together resources for postdocs and research assistants to work with. Three, no doubt there will be certain kinds of convenings and meetings, colloquia and symposia that will be developed over the next few years that will be open to the public, and so we will figure out a way to involve students at the undergrad and graduate level in that work, as well. That’s what’s planned at the moment. Like everything else I have done in life, you start with a plan and then you iterate it several times and it can morph a little bit, and I assume this will morph a bit too, once we get on the ground and I hire staff, and we get going.

Is there anything else that you would like us to know?

EL: I think it is important to note that this is a center for social solutions, so I have given this a 10-year window and we will see what we can get done in 10 years. I have my own timetable here and the center may exist after 10 years, but I know my commitment to it is for the next 10 years, and I’ll be working really hard to try to get as much done in that 10-year window as is humanly possible.