Making the CASE for Science 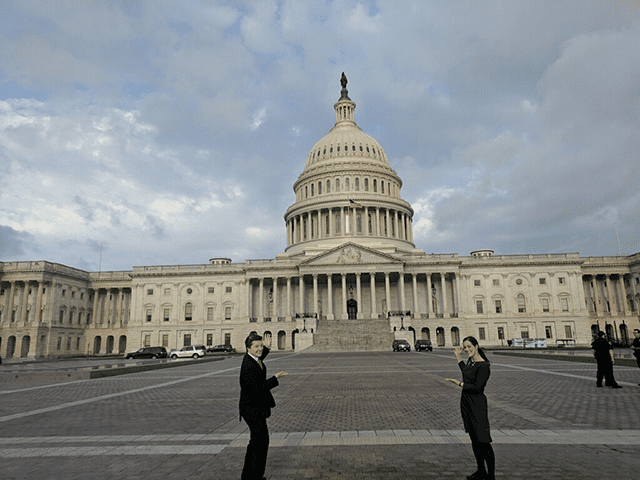 The week of April 2, we (Pete Ehrett and Rachel Merzel) found ourselves headed to Washington, DC for the American Association for the Advancement of Science’s CASE workshop – Catalyzing Advocacy in Science and Engineering. The four-day program was designed to give Ph.D. students in science and engineering a view into how science and technology governance is conducted through the legislative process and executive-branch agencies, with a particular focus on appropriations and budgetary issues. In short: Science and Technology Policy Boot Camp.

Our first day started off with a talk from Toby Smith (Vice President for Policy at the Association for American Universities) about the history of S&T policy in the U.S. and his views on the real-world interactions between politics and policy. He also impressed upon us that, while advocating for S&T funding is important, the government’s discretionary budget isn’t the real problem – ballooning entitlement liabilities are the real long-term fiscal threat (a theme we’d return to often in the following days). Then we broke for dinner, drinks, and getting to know our comrades from universities and professional societies all over the country.

Day two definitely started off with a bang. More specifically, with the uniquely engaging Judy Schneider, Specialist on the Congress at the Congressional Research Service. She is, without a doubt, one of the most fascinating and dynamic people we have ever met. Part of her job for the past 40 years has been training incoming Members of Congress in the legislative process. In her 90-minute whirlwind presentation, we learned more about how legislation is really made and how Congress actually works, than we ever learned in our high school civics classes (and Schoolhouse Rock to boot). The rest of the day’s sessions gave us a crash course in S&T policymaking throughout the executive branch, with perspectives and panel discussions from the former White House Office of Science and Technology Policy and various federal agencies including the NIH, NSF, and U.S. Geological Survey, capped off by dinner and discussion with our fellow students and AAAS representatives. 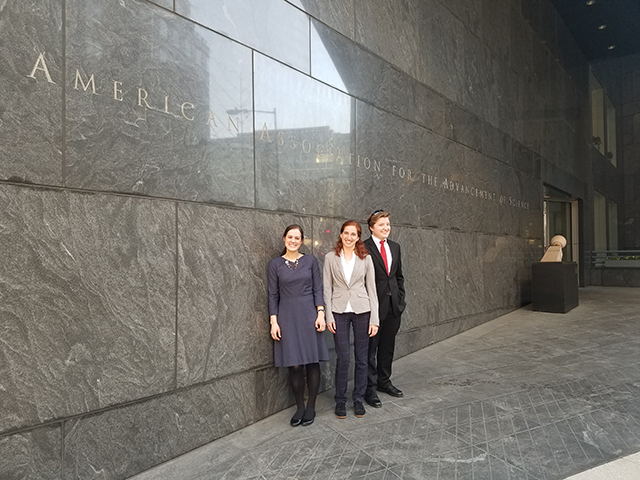 We headed over to the Capitol early the next morning, where we were greeted by Rep. Bill Foster (D-IL), one of the 1.5 physicists currently serving in Congress (apparently the other counts as half a physicist because he “only” has a B.S.). He shared his personal background and his thoughts on the current political situation while raising yet another theme that persisted throughout the workshop: how the long-term nature of research is often at odds with the short-term incentives that pervade the political sphere. The rest of the morning was a crash course (yep, another – hence “boot camp”) on how Congress deals with money through appropriations bills, continuing resolutions, committee structure, etc., plus talks with assorted Congressional staffers on how things work behind the scenes. Then we headed over to the AAAS headquarters to discuss public engagement, future opportunities, and the upcoming March for Science before breaking off with our comrades from Michigan State (gasp! the disloyalty!) to strategize about our very, very intense final day: meetings with policymakers on the Hill.

We connected first with Madeline Nykaza and Kristina Ko, who work with the U-M Government Relations office in DC and had set up a packed agenda with an assortment of their former colleagues, U-M alums, and other staffers with Michigan’s Congressional delegation. (A huge thank you to the two of them for organizing!) Talking with folks from the offices of four Senators and two Representatives about the importance of S&T funding and a long-term policy perspective, and hearing their backgrounds and thoughts on current budgetary debates, was incredibly valuable. It was also enlightening to see firsthand the cultural difference between House and Senate – we really got a sense of the Senate as much more calmly deliberative and the House as a frenzy of putting out fires under the never-ending need to get re-elected.

After our whirlwind of meetings, we came up for air at the nearby Tortilla Coast pub to debrief with the AAAS organizers and with the other members of our CASE cohort who’d had meetings in Congress. Then it was time to bid adieu to DC – although we expect for many of us it will end up actually being “see you later!”

As a final note, we both want to say a huge thank you to Rackham for sponsoring this trip! We really appreciated the experience both personally and professionally – see below – and we hope that other students in the future will get as much out of these sorts of events as we did.

Overall, I have to say that the best part about CASE had nothing to do with the formal program – the talks from big names in S&T policy, or the discussions of how Congress and the appropriations process work in practice, or the presentations on how to talk with government officials about research funding, useful as all those were. Rather, the best part was simply being around a group of intelligent and engaged people from all over the country, with highly diverse backgrounds, of various political persuasions, and seeing just how powerful rational, well-reasoned discourse can be – from the dinnertime conversation about education policy and funding structure with a former Teach for America-er from urban Tennessee, to picking Kristina’s brain about how to bridge the gap between the disparate timescales of scientific research and DC policymaking.

Setting aside emotions and preconceptions to really listen to each other and discuss important issues could go a long way towards addressing today’s pressing political, societal, and technological questions. It was really heartening to spend several days around a group of young scientists and policymakers who feel similarly, and I hope I can, er, catalyze these sorts of discussions both back here at U-M and wherever else my future career may lead.

During the AAAS CASE workshop, it was exciting to apply the knowledge and skills I have acquired in the Science, Technology, and Public Policy program to real-world S&T policy. It was refreshing to see how information that, initially in class seemed so removed from practice, informs day-to-day work and decision-making processes.

Now, whenever I think about Congressional happenings, I remember Judy’s three “P’s” of “procedure, politics, and policy” have to be in balance for anything to get done. While reading recent news on various laws moving through Congress, I have been focusing on picking out which of these three pieces is paramount and noting how it’s driving the outcome of a particular situation.

I appreciated Rep. Bill Foster’s unique perspective on the current science bureaucracy as a misallocation of human capital. I also liked his advice on advocating for science and correcting inaccurate representation: criticism should be directed at the statement and not at the person or the party. Putting this advice into action would serve to elevate much of the current rhetoric and help along meaningful policymaking.

Our most memorable meeting on the Hill was with Sen. Tim Scott’s (R-SC) Chief of Staff, a U-M Law School alumna. She left her job as a prosecutor and came back to Capitol Hill (with some interesting career stops along the way) because working on the Hill is “less stressful.” She has an insightful and refreshing take on what is actually important and what is just politics in the DC bubble. Now, when I get really stressed out about graduate school (or politics), I try to remember her perspective.

Overall, CASE was a fantastic experience and provided me with a whole set of new tools to become an advocate for meaningful and sustainable science policy. I highly recommend this workshop to anyone who may have the opportunity to go in the future.