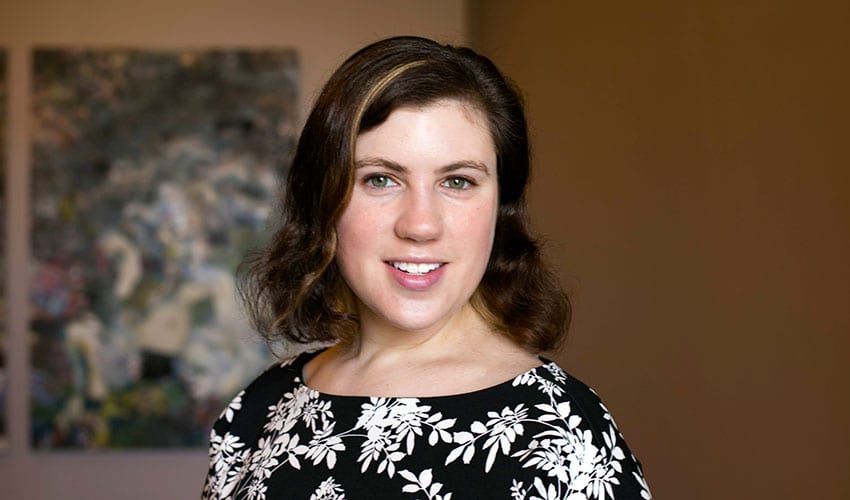 The West Wing. Scandal. House of Cards. Veep. Madam Secretary. What might be entertainment to us is research material for Ph.D. student Emily Saidel, as she digs deeper into the fictional representations of the United States federal government.

Emily completed her undergraduate degree in Interdisciplinary Studies in the Humanities with a concentration in Theater and Performance Studies at the University of Chicago in 2005. With no intention of pursuing further education, she planned to build a career in the performing arts, but the questions that had developed, specifically revolving around television, still lingered in her mind. She went on to complete her master’s degree at NYU, where she wrote her thesis on the changing length of top-rated American sitcom title sequences between 1985 and 2005. These title sequences have dynamic qualities of design, aesthetics, and affect, which intersect with the legal and economic aspects of the television industry. “The iconic ones continue to resonate across generations, like The Brady Bunch,” Emily said.

After her first stint in graduate school, she returned to her career in arts administration, specifically arts in higher education including four years at Stanford. However, she still had burning questions she didn’t know how to answer, nor did she have the resources to do so. She knew that as long as she wasn’t content with unanswered questions, the best next step was to enter a doctoral program where she could dedicate herself to such research.

“Michigan’s communication studies program was designed around social scientists and humanists in the same department. Having methods courses on both sides has laid a great foundation for me.”

Emily began her current research as part of her first-year project and presented it to faculty members and peers in the fall of her second year. “The first two years are basically an introduction to doing research on your own,” she said. While she looks to narrow down her research interest and incorporate it into her dissertation, she notes that the shows on which she bases her analysis did not exist 20 years ago in the capacity they do now.

Emily explains that The West Wing premiered in 1999 and was the first show of its kind, representing the executive branch of government in primetime, broadcast television. There had been comedies set in a political office, but never a show that portrayed the actual operations of the federal government. Even after ending its run in 2006, the show continues to resonate with its viewers and is often referenced when people talk about the state of non-fictional politics. She looks at how reality and fiction relate and how shows like The West Wing mirror and differ from current events. For example, far before President Barack Obama, the first Black president of the United States, there was President Matthew Santos, the first Latino president of the United States, as it existed in The West Wing universe.

In the early 2010s, Emily notes there was a flood of shows that followed The West Wing’s lead. “There was this moment when representing government operations on television gained momentum. Some shows such as Political Animals and Madam Secretary are explicitly using Hilary Clinton’s post-White House life as a jumping off point, while others such as Scandal and Designated Survivor push the presidency into more salacious or conspiratorial dramas.”

When narrowing down her research questions for her dissertation, Emily considers how much of the day-to-day procedures of federal government are actually being seen by the general public in these fictional storylines, and how do these visions of American government travel beyond the national borders. During summer 2017, Emily traveled to Washington, D.C. for a fellowship with the National Association of Broadcasters to work on their Awareness in Reporting Initiative and used the opportunity to ask the experts. Through her conversations with her colleagues, she noted the main themes in fictional representations include a compressed sense of time and a skewed idea of the processes that occur when making formal recommendations or turning a bill into a law.

As a graduate student putting her career on hold to further her education, it was difficult to go from a salary to a stipend. “The first year was a hard adjustment, since graduate students don’t make lot, but we are comparatively well compensated.” With the help of donor funding, Emily attended four conferences during her second year—two held by national organizations and two at the graduate level—to present on both past and current research. According to Emily, this extra funding allowed for greater flexibility to travel and network with peers and experts in her field.

Emily has made her way through various roles in higher education, from student to staff member. While she hopes to pursue a tenure-track position after graduating, she also has a passion for university administration, including examining curricula, providing resources, and making decisions that have an impact on student success. “I’ve gotten a comprehensive view of how universities work, and I really enjoy teaching. Communication studies has a real resonance at this particular moment, and we teach students to think critically about media they enjoy. When they follow careers, as communication majors or not, hopefully they will take that thoughtfulness with them.”