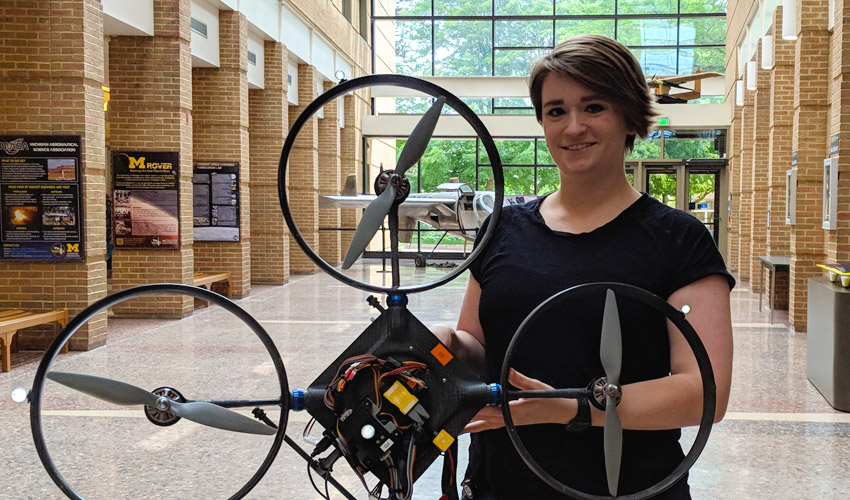 For many people, drones are the things of sci-fi movies and top-secret operations. For Mia Stevens, they are part of her daily routine.

Mia’s research focuses primarily on the boundaries that keep unmanned aerial systems (drones) where they are supposed to be and away from where they are not. To create these boundaries (geofences), the user provides a list of GPS coordinates and altitudes, and the drone stays within the defined area, much like a dog with an invisible fence. However, unlike a dog, a drone’s behavior when approaching a geofence may not always be to come back home, or rather to the center of the field, and that is where Mia’s work comes in. She is currently looking at how users can make sure their drones can back themselves away from geofence edges, rather than simply turning off the motors and falling out of the airspace when they have approached an area they cannot enter. She explains, “The edges of where you want a drone to fly are often the most dangerous places for it to just fall out of the sky, so it’s important that it moves back towards the center of the field.” That sort of fly-back behavior is more complicated than it sounds. Oftentimes, the center of the field is not easily determined, due to an oddly shaped area or obstacles in the field. Mia’s work backs the drone away from the edge of its defined space, then returns control to the user.

Geofencing for drones is a rapidly growing field, and Mia is at the forefront of this technology. Until recently, the main teams publicly pursuing its advancement were from NASA and the University of Michigan. Now most companies with a concentration on drones are increasingly dedicated to geofencing, as it plays an integral role in the safety of drone operation.

“It is really the pursuit of science, not profit that keeps us moving forward. We are finding solutions that someone pushing a product would not likely pursue.”

Currently, the options for geofence structures are quite limited. Many are simply cylindrical and current systems are unable to check if anybody else is flying in the same space, increasing the risk of a collision. NASA and the Federal Aviation Administration are two of the organizations trying to find ways to mitigate that risk, enforce the solutions, and incorporate them into the systems themselves. Mia is currently developing technology that will be applicable to those emerging solutions and hopes to go into industry upon completing her doctoral degree.

“I would like to continue working with unmanned systems and growing in that sector. I love seeing new ideas becoming reality—it’s just really fun for me.”

As a Rackham student, Mia was part of the first group of Ph.D. students in U-M’s Robotics program. “It has been really cool to watch it grow and help shape it.” With the groundbreaking of a new facility, Mia says it will be helpful to have a centrally located program, especially as she, along with other graduate students, works toward a feeling of community. “We have socials, student lectures, graduate student council—it helps to provide an open line of communication between students and faculty and overall a more collaborative atmosphere—and do what we can to build a sense of cohesion between graduate students. It’s important to let other incoming students know that they will have social lives while they’re here.” With the steady growth of the program, Mia says it very much feels like a community.

The Impact of Funding

Mia originally received funding as part of a partnership with NASA to study geofencing as a method of risk mitigation for drones through simulations and flight tests. After that, she began collaborating with SoarTech to mathematically prove the correctness of some of the algorithms used in geofencing.

Mia is a recent recipient of the Rackham Predoctoral Fellowship, which includes one year of funding, allowing her to explore the parts of her field that are “most important to her,” rather than relying on funding from an outside source, which often requires more specific deliverables. “This award really gives me the freedom to make my dissertation a more complete picture. I’ve laid the groundwork, and now I can pursue what I think is the right direction in what remains to be researched.”