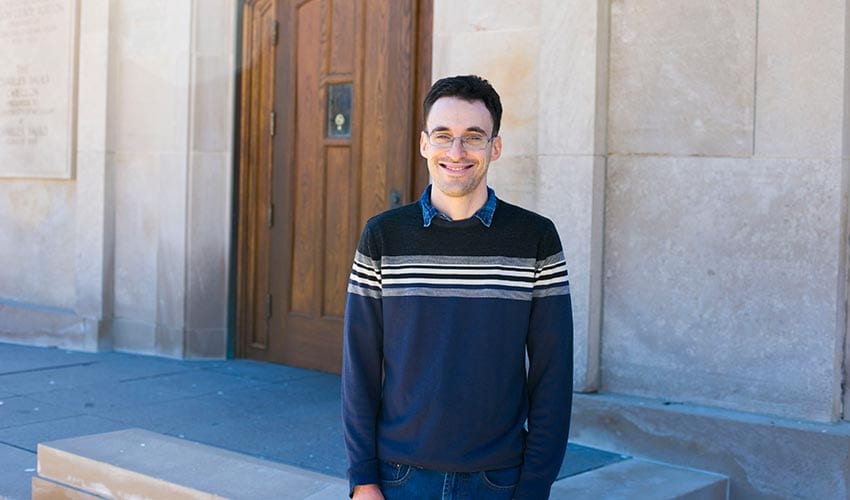 “What does peace mean to you?”

That’s what Yuval Katz wants to know. A Ph.D. student in communication studies, Yuval came to the University of Michigan after earning his bachelor’s and master’s degrees from Hebrew University in Jerusalem. “I read about the department and it seemed like a group of collaborative thinkers, rather than the politics that often go along with academia.”

Yuval’s research in his master’s program focused on the nonsensical world of internet memes and helped him better understand how meaning takes shape in the digital realm. This seemingly unrelated topic is what laid the groundwork for him to take steps toward discovering what peace means to regular people, outside of the diplomatic context. He had studied international relations as an undergraduate student, but he was critical of the field, as it seemed that nobody truly understood or looked into how the average citizen feels about conflict and peace. Recently, he began to observe Israeli media and noticed the conversation around peace has faded over the years. That is when he became more curious about the meaning of peace and how it changes between individuals. He observed prevalent media events, including the funeral of a key leader in Israel who was known for his stance on creating peace. Did this event start a conversation about peace?

Soon, observing the media simply wasn’t enough. Yuval had to go straight to the source. With the help of Rackham funding, he was able to travel to Israel for two months and ask local college students “what does peace mean to you?” He asked about the interactions between Palestinian and Jewish people, and he strived to understand how individuals use social media and the media in general to interact and talk about the topic of peace.

During those interviews, Yuval also gave these students a piece of paper and gave them these simple instructions: “Draw peace.” Participants were then asked to have a conversation about what they had drawn, revealing varying conceptualizations based on both identity and background. He hopes to use these findings to develop a chapter of his dissertation.

Yuval admits that, on a personal level, attending graduate school so far from his home country has been difficult; however, he is steadfast in knowing he made the right decision by coming to the University of Michigan. “The people here are remarkable, and the department is so diverse. It would have been way easier to stay around my family and speak my own language, but I came here to meet people who think differently than I do.”

Yuval speaks highly of his diverse department and the resources available to him and to other Rackham students, including the opportunities to attend conferences in San Diego and Berlin, present his work, and take classes outside of his course of study, including those in anthropology, sociology, American culture, and comparative literature. “Communication comes from a humanistic and social science point of view. We must be able to think broadly to understand it.”

After he completes his degree, Yuval hopes to stay in academia, whether it is here in the United States or back home in Israel. He has always been fascinated by the ways in which people create meaning and understanding of subjects, but whether he will remain on the same research track after graduation remains to be seen.