Home » Discover Rackham » What Does It Mean to Go Gameful? A GSI’s Perspective

What Does It Mean to Go Gameful? A GSI’s Perspective 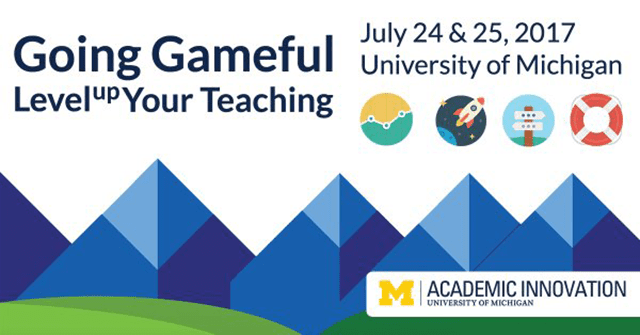 As graduate students at the University of Michigan, most of us (whether we’ll admit it around our imposter-syndrome or not) are pretty darn good at navigating the system that is modern education. But despite our own comfort within this infrastructure, it turns out that school as it exists is often poorly designed when it comes to supporting and improving student learning. My Ph.D. work has been dedicated to investigating what we can change about how courses operate that would address this–we call our approach gameful pedagogy, as it’s inspired by the way that excellent games are profound and transformative learning experiences.

Gameful courses have a couple of key features in common (and then a multitude of ways that instructors may customize them to manage their particular domains). These courses all have students begin the semester with zero points, earning “up” as they engage and develop mastery. They feature some area where students are asked to make choices: this might be when to do assignments, which assignments to do, how to do assignments, and who to collaborate with, to name a few ways we’ve seen support for student agency implemented. And finally, gameful courses emphasize the value of transparency and “thick” feedback – students know how they’re doing in the course throughout the experience, they are able to see and interact with analytics that show how their performance compares to their peers, and many courses employ rubrics to help students understand how they performed on key learning objectives and what they would need to do to “level up.”

We’ve been piloting gameful pedagogy at U-M for almost six years, working with faculty-innovators from across 22 programs on campus, as well as institutions all over the world. This summer, we’re doing something new: we’re hosting a one and a half day Gameful Summer Institute to share our approach, and we’re offering five scholarships to help U-M graduate students attend. Full participation in the conference can count toward the GTC+ certificate for students interested in teaching with digital media. Interested? Apply here. Curious to hear more about what gameful is like? Read on for my interview with Andrea Barbarin, a Ph.D. Candidate in the School of Information and the former head GSI for SI110: Intro to Information Studies.

Q: Tell me a little bit about your experience as a GSI for a gameful course?

It was overwhelming and exciting at the same time. Overwhelming because I wasn’t sure what to expect, it was so different from any of my learning experiences, and also so different from any of my teaching experiences. But that’s also what made it exciting! I was also dealing with students who had never experienced gameful before, mostly freshmen, a few sophomores, so we were all in this together. It was a gateway course, so we had a lot of different types of students with different backgrounds and interests, figuring out if they wanted to major in this area [Information Science]. I should also mention that I was the Head GSI for the course, so I felt like I needed to provide leadership for the process despite not having experience with it.

I would say that as much as I felt maybe scared at first, my initial feelings were overtaken by the rhythm of the semester, maybe more so even than other courses. Once students figured out the structure, it was easier to focus on the content and the skill, maybe because there were multiple opportunities to do the same type of assignments.

The students, they were a little anxious, they said things like “How am I supposed to figure out what to do?” and I wanted to say that’s the whole point, you have to figure out what you want to do. It’s so much bigger than the class, it’s life. If [students] meant to to spread out the work over the course of the semester, I could see that they weren’t doing that, they were bunching things up at the end of the semester. It worked out in the end, but I’m sure some of them had to do a lot of work at the end to make it all come together. That was sort of the consequences of them not doing work earlier, and that was okay, they learned – maybe it was too tight in the end, and they figured that out. I think those kind of lessons were usually more obvious towards the end of your degree, but in the first year, second year, you’re still trying to figure out where you fit in your coursework – that was an important thing for them to learn.

Q. What is different in gameful courses?

Definitely that students need to take more responsibility for themselves in figuring out a path. It wasn’t like we were setting them alone in the woods with wolves, we were always there to help, available at office hours and helping to create paths. But in some ways, I had give up power, and some amount of stress…there was a certain amount of pushing them out of the nest, empowering them, and giving up some power myself to do so. For grading, we were really clear what they had to do to earn certain grades. There was no room to change the goal posts, or how hard we graded students’ work. We had to give up power over the student's final grade. And by power, I mean being the final arbiter of whether a student received an A in the class. We were very transparent about what students needed to do, and when you’re not as transparent, that gives the instructor more leeway in assigning the final grade. Here, it was all up to the student – they either did the work or not. That was concerning – we had this question of, were we giving away too many A’s?

Q: How do you feel about whether or not you gave away too many A's?

There is the part of me that feels like we gave away too many A grades, however, that assumption that there are too many A's to give out has been challenged in my mind forever, and it’s changed my thinking. So here’s the tradeoff – we gave out more A's than in other classes, but because we had repetition and people had opportunities to learn, people who applied themselves got a lot out of the feedback they received and made marked improvement. We may have given out more A's, but I think the level of quality and improvement was greater than I would have seen in other classes.

And I don’t know to what extent this would happen in other classes – but there was a student who challenged the grade that they received, and we had a rubric, and I told the student, you performed where we expect a Michigan student to achieve, and there’s this level over here that’s above and beyond, you haven’t met that yet. And this student worked incredibly hard, and every other piece of work was at that higher level, and I was able to go back to the student and acknowledge and congratulate the student on their improvement.

It also made team teaching easier, we only had a certain number of different types of assignments we had a plan for, so across the team it was easier to discuss what our expectations were, and share that with the graders.

Q: If you were to advise other GSIs teaching gamefully, what would you say?

Have an open mind, and have fun while you’re doing it. I’m a competitive person so I loved stoking up the competition. I was very clear about how well we were doing on the leaderboard, and I made it clear I wanted us at the top. With the permission of my students I even announced some of the top students in the whole class to my section. It was fun to use the code names and be playful.

Going back to the number of A's we gave, just be open to be challenged on your assumptions. I would also suggest, I’m not sure how often this is done, but we made a map for the students, we created a diagram that showed all the paths they could do, and that helped it make sense, just so they could see the process. That might be helpful.

Q: How has gameful changed your expectations around teaching and learning?

There are other things more important than a grade, and that’s so hard for me to let go of! When I took a class after this, I was more relaxed about my grade, and I focused on what I needed to learn. It freed me up to focus on what I needed to learn rather than the grade, but it’s SO HARD to let go of the grade thing because it has been such an ingrained part of my educational experience to date.

Also, this idea of giving people only one bite of the apple – that’s not necessarily the best way to do things. The idea that you can give people multiple opportunities, through resubmissions, or different assignment types, the opportunity to try and try again, the risk of failure is low in a gameful learning environment, and that part was good for students. I don’t know if students realized that fully, there are definitely students who don't take advantage of it, and they do one type of assignment, and don’t take risks.

I have another example of a student who went to a lecture (attending lectures on campus was one of the assignments in this course) that was an advanced talk on Network Theory. If I had gone myself, as a Ph.D. student, I would have been overwhelmed, and this was a first year undergrad. She wrote a report on it, and she didn’t get a stellar grade, but it was nice that it didn’t knock her out, but if it could have then she wouldn’t have gone in the first place. There was little risk that it would irreversibly harm her grade, she got to try it out and see.