Last month, I had the opportunity to attend the American Chemical Society (ACS) national meeting in San Diego. The ACS meeting happens twice a year, once on the west coast and once on the east, and about 20,000 chemists from all over the world come to participate. 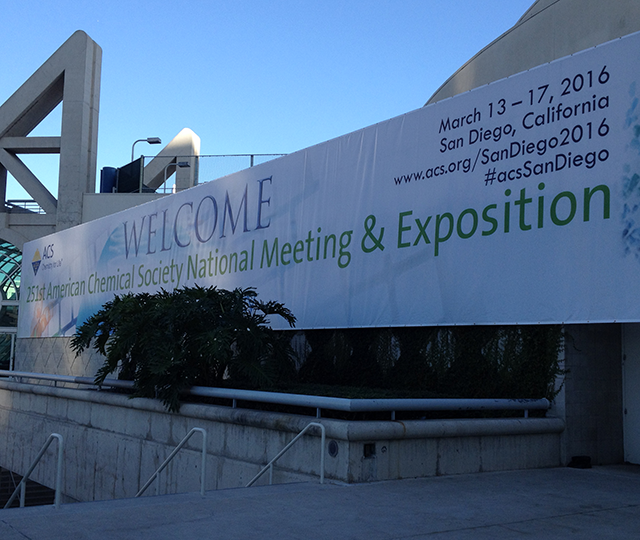 Despite the huge participation, or perhaps because of it, the ACS gets a bad rap among chemists. The common complaint is that it’s too big. At any given time there are scores of talks, poster sessions, workshops, and social gatherings all happening simultaneously. It’s physically impossible to do everything, and functionally impossible to do most of what you’ll want to do. Plus, when it finally comes time for you to give your talk, you’ll give it to a room of ten people, more if you’re lucky enough to be in a session with a big name.

Small conferences are preferred by many faculty because their students get more bang for their buck. For instance, two summers ago I traveled to Montreal to attend a solar water splitting conference. There were less than a hundred people there, and everyone’s research was intimately connected to my own. I not only got to see some of my field’s top scientists talk, but also was able to interact with them directly and get their input on my project. I came away from Montreal with great new ideas for my science and a huge rush of renewed enthusiasm.

The thinking, then, is that students won’t get The Montreal Experience at the 20,000 Person Meeting, so why pay for them to go? And why should we as students bother?

I decided to attend the ACS meeting based on the career resources. My goal was to go down there, meet other scientists working in science communication (or harboring aspirations of doing so), and learn how to get jobs like theirs. ACS was also offering to review my resume and give me some advice on tailoring it to the job I wanted, though I wasn’t initially hopeful that would be of much help as someone who is not seeking a job in academia or industry. My outlook was to take advantage of the peripheral stuff, pick the most exciting science talks from the program and go to them, and do my own talk basically because I had to.

But, when I got off the plane in San Diego, I was all of a sudden energized (weird, because I had just flown nine hours starting from 3 am Detroit time on Daylight Savings Day). I thought to myself, “Hey, this could be the last time you’ll be at this meeting, so let’s just hit it really hard and recoup later.” So I made my battle plan, Sunday through Thursday, 8am to 6pm or later every day.

The first thing I learned was that I underestimated the professional society’s reach in terms of career placement. I don’t know if I just got lucky with the consultant that reviewed my resume or not, but he had a laundry list of suggestions for internships and contacts to make and strategies to use while refining my applications. Other organizations involved in science communication, like the ACS’s magazine Chemical & Engineering News and also the American Association for the Advancement of Science, sent representatives to the conference. I waited for their booths to slow down before sneaking in and asking about life choices, which they were more than happy to talk about. I got some good advice and some more insight about the diversity of different jobs available for scientists looking to write.

Secondly, I did find that it was harder to get involved and get noticed at the big meeting than the small conference, but only initially. At a small conference, it’s easy to sit back and watch, and people will come up and talk to you just because you’re there and they have the time. (This is the same strategy I would employ at your house party, interestingly enough.) At the big conference, though, that’ll never work. I found that by sitting in the same room for several talks in a row and getting to know the audience there, I felt better about interjecting with questions. Once you start talking, people notice – especially if you’re a student. Then you’re all of a sudden involved in the discussion, people know your face, and someone says hi to you as you’re walking through the convention center. The sea of faces gets broken up by someone you know, and the meeting feels a lot smaller. So, the next day, you get back up and do the same thing, maybe with a different group this time, and the effect compounds.

There’s plenty to be gained from the 20,000 Person Meeting; it can’t be as laser-focused as a small meeting can be, and quiet, non-famous individuals have to work a lot harder to get it, but I came away from the San Diego meeting with a lot of the same feelings I had after Montreal – namely that my research meant something, that people were interested in it, and that there were things I could do that I hadn’t yet thought of. I felt capable and optimistic, and we all know how hard it is to come by those feelings as a graduate student.

Oh, right, and I got to hang out in southern California, also known as Actual Paradise, for a week. All in all not too shabby for a “pointless meeting.” 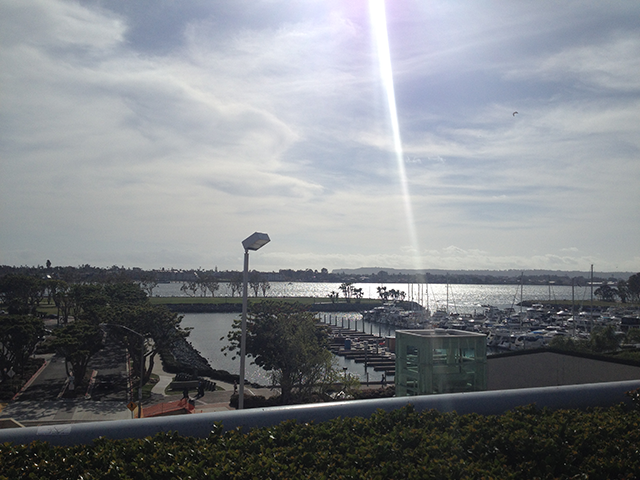 View from the convention center. Staying in the talks was sometimes a struggle. Sometimes the talks lost.