A Funny Thing Happened on the Way to Her Degree

Linguistics Ph.D. candidate Emily Sabo hopes to advance our understanding of how multilinguals produce and process language. She also really wants to crack you up. 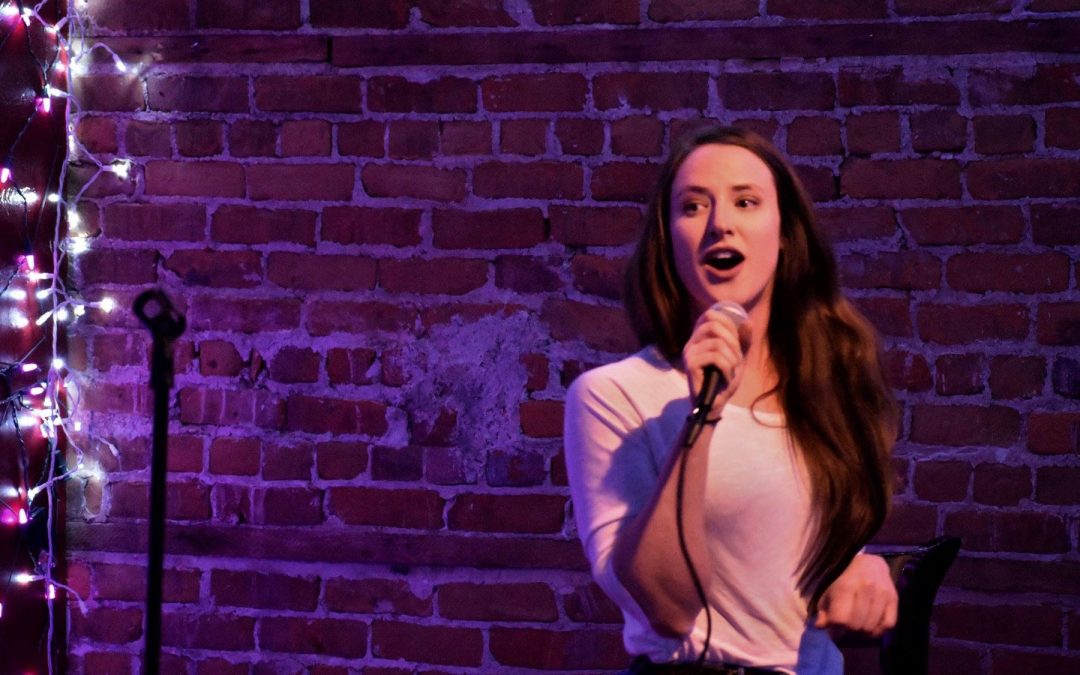 On day three of a big, four-day linguistics conference in 2017, Emily Sabo needed a break. After feeling the intellectual overload that can come with attending an event like this one, it was time, Sabo says, to step away from the “academic saturation” to clear her head. She found herself strolling midday through downtown Madison, Wisconsin, when a marquee caught her attention, even though looking for a local comedy club had not been remotely high on Sabo’s list. She was particularly surprised, then, after approaching the window of Comedy on State, to find that she appeared to be on someone else’s.

“I figured I’d see if there were any tickets for a show later that night,” says Sabo (pronounced SAY-bo). “Instead, the woman at will call looks at me and says, ‘Honey, what’s your name?’ And for some reason, I responded and said, ‘Emily Sabo.’ Then she looks at her list, taps her finger next to a name, and she says, ‘All right, head on in, Emily.’

“I had no idea why my name was on that list. But my curiosity was certainly piqued. So I walked in, and it wasn’t a show. It was—I kid you not—a workshop for up and coming female comedians. I don’t remember anything about that workshop other than sitting there with this overwhelming sense of, ‘I think I could do that. I think I kind of want to do that.’”

Of course, what had brought Sabo to Madison in the first place were slightly more scholarly ambitions. A Pittsburgh native, she graduated from Penn State in 2014 having authored an undergraduate honors thesis titled, “Categorical Perception of L2 Vowel Spaces: Quechua-Spanish Bilinguals,” with a B.S. in world language education and a B.S. in applied Spanish. Sabo received her master’s at Michigan in 2018, and she is now a doctoral candidate in the Department of Linguistics. Her focus on bilinguals continues, as she seeks to get a better grasp on what is happening in their minds as they process language.

“For the case of a monolingual person, you only have one mental dictionary that you’re working with,” Sabo says. “But bilinguals or multilinguals have several. And so the question is, how are they able, in the moment, to process and select, let’s say, the correct word in the correct language and keep them both straight? During my Ph.D., I’ve branched out to do research in neurolinguistics, using tools like an EEG (electroencephalogram) to look at the brain waves of people who speak more than one language. So I use neuroscience technology to get at sociolinguistic questions like, does the accent that a person speaks with affect how you process their language? For example, if they have a foreign accent, what does that change about your processing?”

“Does the accent that a person speaks with affect how you process their language? For example, if they have a foreign accent, what does that change about your processing?”

Sabo shares one seminal study published in 1999 that served as a major source of inspiration for her current research program into bilingual language processing. In a carefully controlled psycholinguistic study, researchers Michael Spivey and Viorica Marian used a particular experimental measure called eye-tracking to figure out if bilingual people completely shut off their other mental dictionary while speaking in one language, or if both dictionaries are always somewhat activated.

“Imagine you’re a Russian-English bilingual and you’re looking at a screen with four different pictures,” she says. “The entire experiment is conducted in Russian, and the researchers ask you in Russian to look at the picture of the stamp. The word for stamp in Russian is марка, which sounds a lot like ‘marker’ in English. Of the four pictures on the screen, there’s a picture of a stamp, a picture of a marker, and two random distractor pictures. Most of the time, the subjects do look at the stamp, as instructed. But the picture they look at with the second highest frequency? The marker—even though everything would suggest they’re thinking only in Russian. And a whole host of psycholinguistic and neurolinguistic studies since have shown that the bilingual mind never fully turns off its other language’s dictionary.”

One thing a lot of people in the United States don’t know, says Sabo, is that bilingualism, globally speaking, is the norm—not the exception. This was a point Sabo made in her public-facing Nerd Nite talk in Ann Arbor in 2019. A recording of the talk caught the attention of Venezuelan filmmaker Juan D. Freitez, whose documentary shorts have been featured by National Public Radio, NBC News, the Huffington Post, and others. Now, Sabo is producing a documentary with Freitez and co-producer Aliyah Mitchell that expands upon the bilingual experience and investigates language diversity and linguistic discrimination in the United States for a general audience. The film, titled We Are What We Speak, is currently under production and features interviews with both professional linguists as well as everyday language users in the United States. 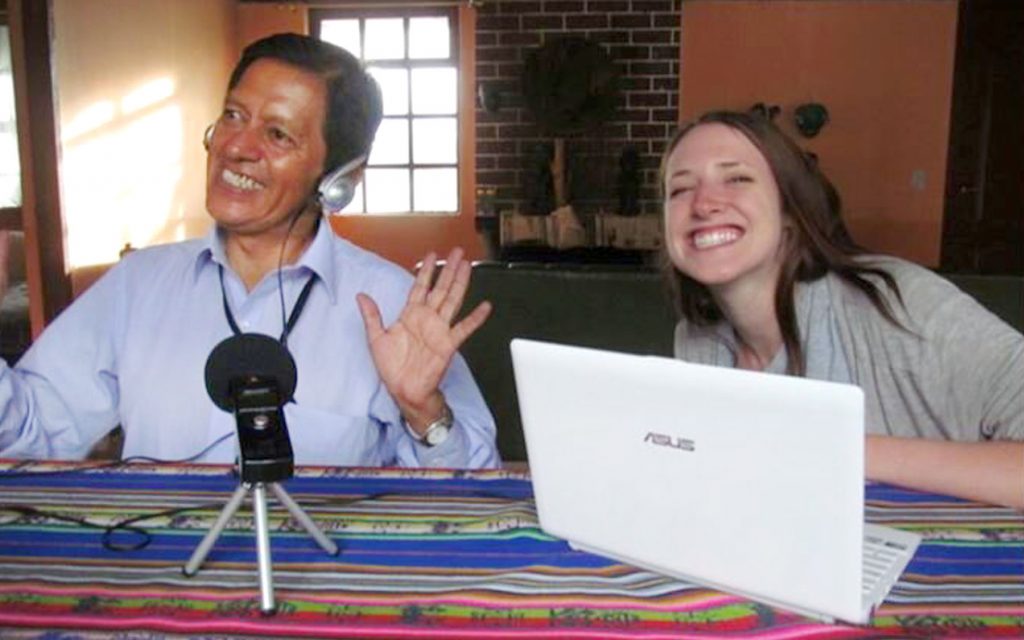 “I’ve gotten to meet some people that I otherwise really never would have had contact with,” Sabo says of her field work, which included this 2013 interview with Quechua interpreter Jose Maldonado.

Typical of people in her field, Sabo has several other mental dictionaries. She says she is fluent in Spanish and strong in Korean (the latter the result of a Fulbright in South Korea and an intensive eight-week program there through a Critical Language Scholarship), and she is also conversant in Quechua and American Sign Language. Quechua is an indigenous language spoken by people in the Peruvian Andes and several other South American countries, including Ecuador, where Sabo’s husband is from. Her fieldwork in that region led to what she says is one of her favorite language stories.

“While collecting data in rural Ecuador for a corpus study I was working on, I had the opportunity to interview the Quechua interpreter for Rafael Correa, who at that time was the president of Ecuador,” she explains. “And in the Quechuan languages, they have something called evidentials, which are morphemes that you tack on at the end of verbs to signify how you know the information you know—is what you said a fact because you saw it with your own two eyes or is this just gossipy hearsay? They joke in Quechua that the language’s grammatical structure makes it hard to lie.

“This guy’s job was to go on the campaign trail and decide on the spot whether each verb phrase that the president would say was fact, hearsay, or made up.”

“And so, as a Quechua interpreter for the Spanish-speaking president, this guy’s job was to go on the campaign trail with Rafael Correa and decide on the spot whether each verb phrase that the president would say was fact, hearsay, or made up. And these are live political campaign speeches, so you can imagine the amount of cognitive energy it took for him to interpret these messages. After all, he wants to be true to the Quechua people in the audience since he himself is Quechua, but he also has a job and a boss whose credibility he can’t downgrade by sticking a hearsay morpheme at the end of every verbal phrase.

“Now that I do neurolinguistic work, I would love to reach out and get that guy into our lab so that we can see what is going on in his brain when he’s doing that interpretation, because that’s cognitively a really hard task.”

About a year after Sabo wandered randomly (or perhaps was led by a powerful cosmic force) into the female comedians’ workshop in Madison, she signed up for her first open mic. She’s been doing it ever since and even recently performed on-stage in Berlin. And while she originally wanted to keep her standup separate from her research in the name of work-life balance, “as an academic, you always start making connections.”

Now humor is squarely in scope for Sabo’s research. Among other topics, she’s interested in how bilingual comics like George Lopez and Gabriel Iglesias use code-switching, or flipping between languages, for humorous effect. Last fall, she gave an invited TEDxUMDearborn talk on the unexpected connections between linguistics and comedy, which explains where humor hides in language. “If you’re looking to inject more humor into your life,” she says, “start by embracing your naturally occurring speech errors.

“One of my favorite examples comes from the classroom,” Sabo says. “A student raised their hand in class and said, ‘I like that theory, but it needs to be twerked.’ Now, we could get embarrassed about these little errors, but why should we? Speech disfluencies are an inherent byproduct of the human language production system. If we could just forgo the whole embarrassment routine that society calls for in professional spaces, we’d see that these moments are just plain funny—and they give people a chance to loosen up a little bit, which I am all for.”

Sabo says she is passionate about teaching and mentoring. She holds a position at the Center for Research on Learning and Teaching (CRLT) and is the linguistics department’s graduate student mentor. In addition, she is one of the co-founders of the Language Matters initiative, a group of U-M graduate students and faculty who provide resources and support to help the university community navigate issues of linguistic diversity and discrimination. The immediate reward of getting to interact with undergraduates and provide guidance to fellow teachers is welcome in a profession where research projects can take many years to yield results. But does humor help?

“Yes, but there’s a fine line,” she says. “We know that injecting humor into the classroom increases student recall and engagement, and it builds community and rapport. But I think if you do it too much, you can lose a little bit of credibility as an expert.

“I like to think I’ve learned to balance it.”

Sabo has been the recipient of several Rackham Travel Grants for travel to conferences and talks. In addition, she has received a Rackham Student Research Grant to pay subjects for participating in her research studies. “I also love that the Rackham Building has a quiet space like the Reading Room,” she says. “And a microwave, because there’s nothing worse than having to eat cold pasta while writing your dissertation.”