Through a new program, Rackham alum and former Barbour scholar SeoHyun Bae is empowering local people in Ethiopia to help their own communities. 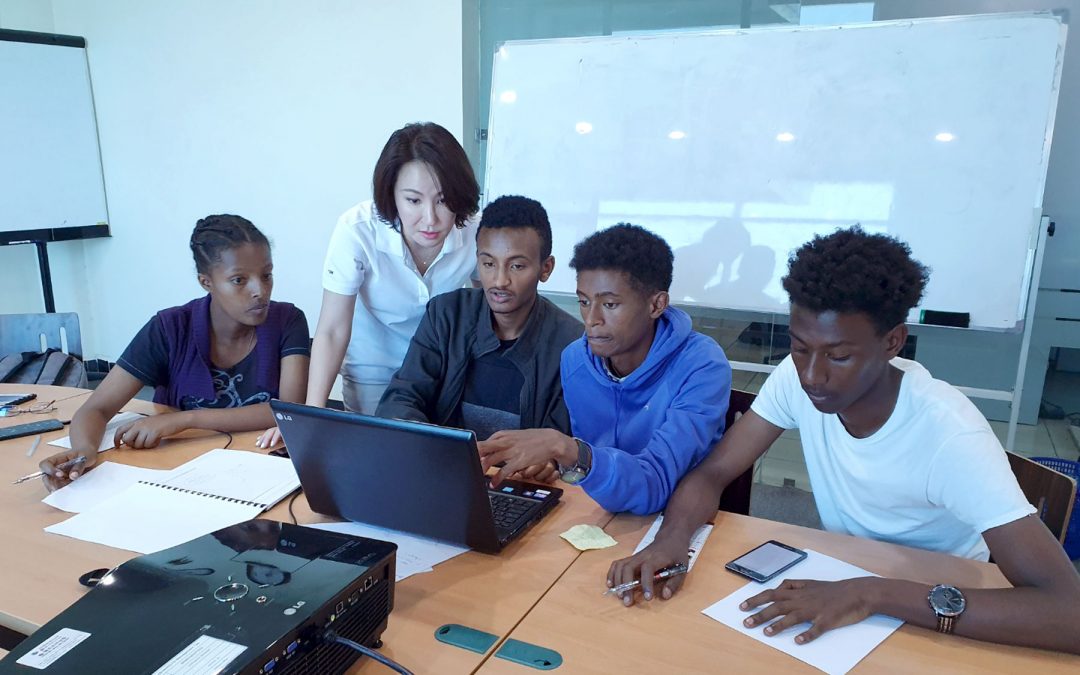 Raising the global standard of health and well-being by increasing access to primary health care in developing countries around the world has been the subject of much discussion among public health workers and scholars since the late 1970s. But achieving that goal has proved much more difficult, notably due to an acute shortage of physicians in developing countries.

In 2004, Ethiopia set out to change that by creating the Health Extension Program (HEP). Modeled after the east African nation’s successful agricultural extension program, the HEP recruits and trains Health Extension Workers (HEWs) from local communities, or kebeles, in order to provide basic health services for much of the country’s almost 80 percent rural population. All women, there are more than 40,000 HEWs working throughout Ethiopia today, leading to significant improvements in healthcare. Since the inception of the HEP, child deaths in Ethiopia have been reduced by 67 percent, according to a United Nations study, and there have been significant increases in immunization and sanitary system and latrine usage, along with reductions in maternal mortality.

Despite its successes, the HEP still faces significant challenges, among them the logistic and financial difficulties associated with training HEWs in a primarily rural nation with a sparse communication infrastructure. Because this limits opportunities for online trainings, most HEWs must travel to Addis Ababa, the national capital, for 30-day courses costing approximately $80 dollars per day—or roughly $43 million for the entire cohort each year. It’s costly and time-consuming, and something Rackham alumna and Barbour Scholar SeoHyun Bae (M.P.H. 1993, Ph.D. ’98) hopes to remedy.

When Bae completed her doctoral studies at the U-M School of Public Health, where she studied the effects of acculturation on stress and depressive symptoms among different ethnic populations, she set out with a goal in mind: increasing health equality around the world.

“I wanted to use the skills I’d learned at Michigan to help developed and underdeveloped countries become more equal,” Bae says. “That’s my life goal. I want to not only help solve public health challenges in the developing world, but to make sure that those solutions are sustainable.”

As she pursued her postgraduate career, from a postdoctoral fellow at the Center for Culture, Ethnicity, and Health to her current position as a professor in the Department of Nursing and chair of the Social Service Center at Pyeongtaek University in her hometown of Seoul, South Korea, she spent much of her time pursuing that goal. She sought out opportunities to conduct fieldwork wherever she could, and dedicated her vacation time to volunteering in underdeveloped communities around the world.

Over time, however, she identified a problem with the conventional model for such outreach efforts. While the results were often encouraging during the lifetime of a given project, usually between three and five years, once the funding was exhausted and the expert personnel left the area, the efforts were only rarely sustainable.

“It became a real point of struggle for me,” Bae recalls. “After the project was finished and we left, it would all fall apart because the people in the community didn’t have ownership of it. We need a new way of doing things if we want to help these communities in a way that will last.”

Putting thought into action, Bae secured a $2 million grant from the Korea International Cooperation Agency last fall to pilot a novel kind of outreach program aimed at building expertise and capacity in local communities to solve local problems. Through the grant, Bae founded SharePlus Graphic Design with eight recent college graduates from Ethiopia. The startup’s first job: using 2-D and 3-D animation to create a series of interactive digital modules that convert the in-person HEW training material to an e-learning format that HEP can distribute to its workers around the country. Improving pedagogy, increasing access and training flexibility, and limiting the time and expense used to travel to the capital for face-to-face training are all benefits of this new approach, according to Bae. The modules won’t require a network connection, meaning they can be played anywhere. 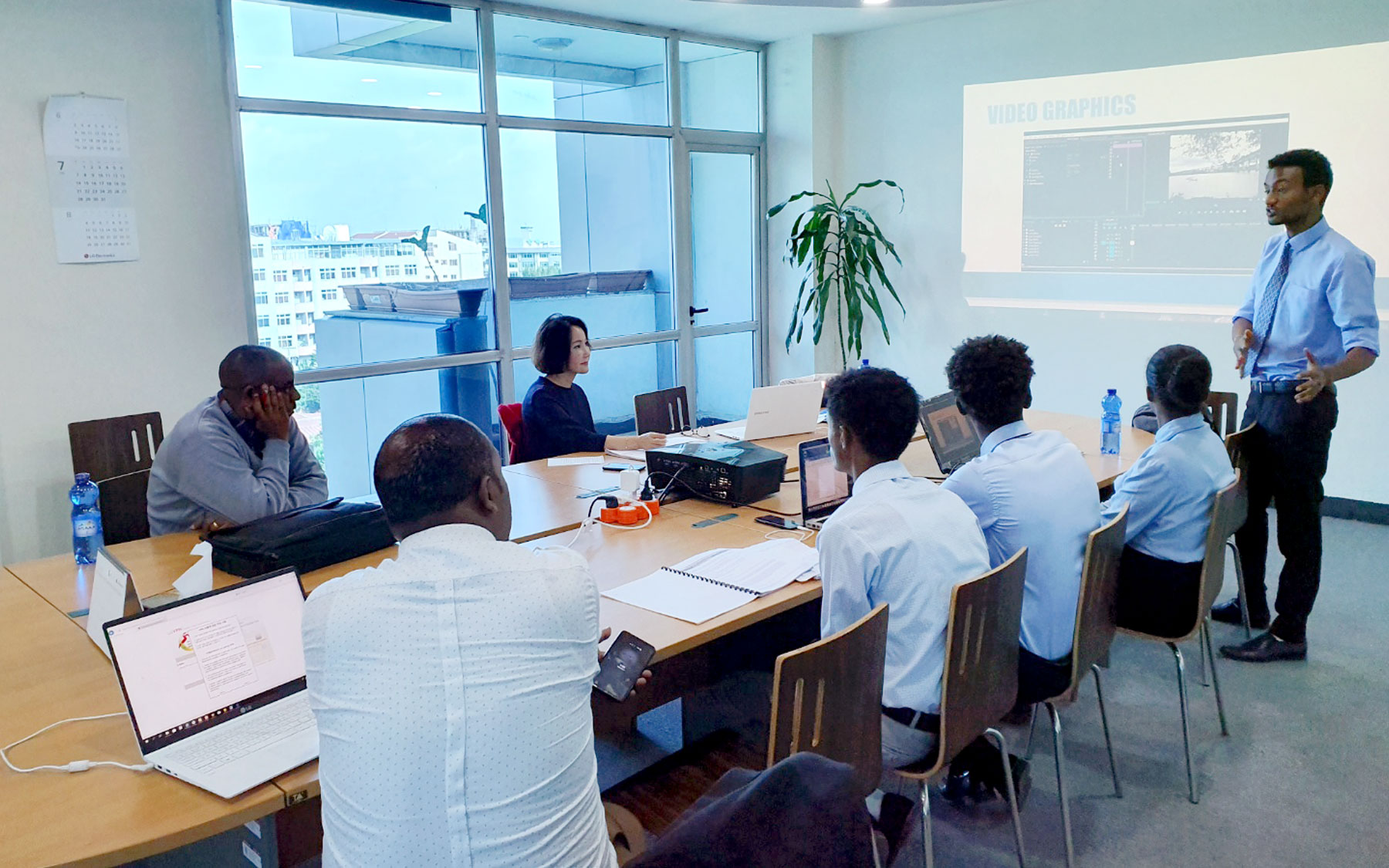 Bae (third from left) works closely with the SharePlus staff as they build their company and coordinate with clients.

“Instead of just hiring people for a short-term project, I wanted to help people in the local community apply their skills and gain experience working on a problem impacting their own community,” Bae says. “Ethiopia has an immediate need for this kind of training module, and by supporting local entrepreneurs it’s my hope that they will be able to continue to grow their company, find new work, and become leaders in this field for their country.”

Over the past six months, Bae and her colleagues have helped SharePlus’s young staff develop the basics of their new company, such as a mission statement and organizational chart, coordinating meetings between them, HEP, and Ethiopia’s Federal Ministry of Health, and providing additional skill training. Through the process, Bae says she has every reason to be optimistic about their success.

“Every week, I see their skills developing; they’re becoming more empowered and more confident that they can do this themselves,” she says. “They want to build the best graphic design company on the continent. Already their scope has grown, and they now see their company not as local, but as global. They’re eager to learn and getting better all the time, and that’s what will make this effort sustainable.”

During her time at U-M, Bae was a recipient of the Barbour Scholarship. Among the oldest and most prestigious awards granted by the university, it is awarded to female students of the highest academic caliber from Asia and the Middle-East.

“The Barbour Scholarship was my first scholarship as a graduate student,” Bae says. “As a foreign student, it made me feel like I was seen and supported, like I wasn’t alone. I’m still very thankful for it.”