Asian carp are poised to enter Lake Michigan, but to what extent is a matter of debate. Rackham alumnus Peter Alsip’s research sheds light on the watery invaders’ potential whereabouts. 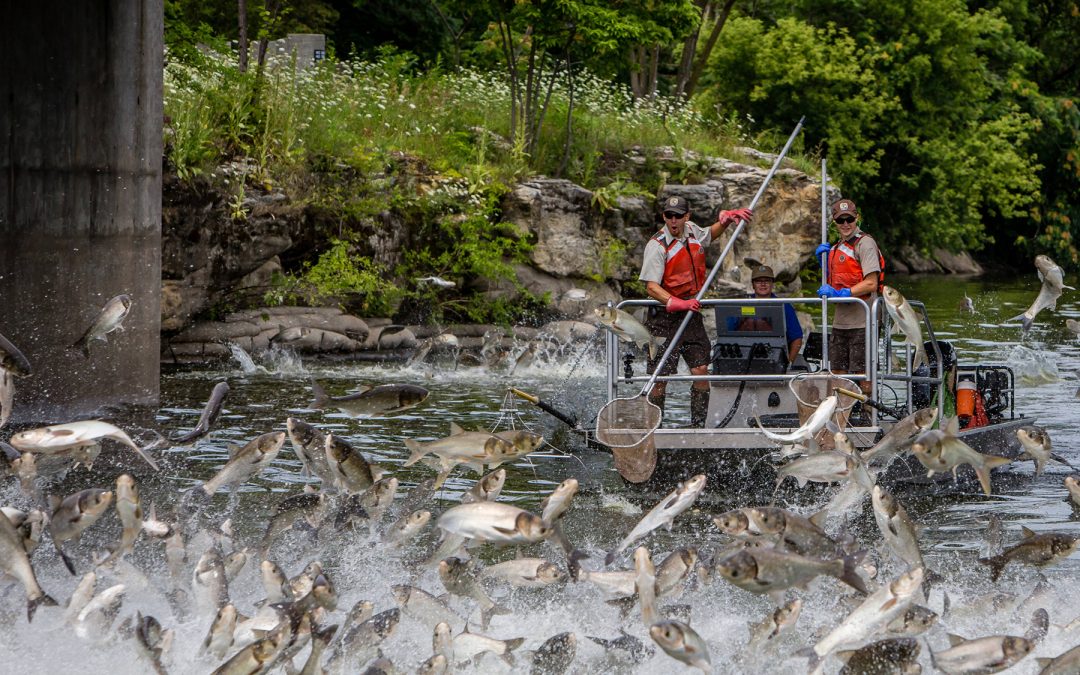 Anyone who has found themselves compelled to stumble down the stairs for a midnight raid on the refrigerator knows that food can be a powerful driving force. Civilizations have risen and fallen, wars won and lost, all on the basis of food and its availability. Nowhere can the importance of food be seen more clearly than the tightly interconnected world of ecology. Whole ecosystems can shift or collapse based on changes in food availability, and the introduction of a single new species can dramatically alter the existing balance—something ecologists studying the Mississippi River System know all too well.

Beginning in the 1970s, Asian carp—the collective term for bighead, silver, black, and grass carp, all native to East Asia—were imported to the United States. Chosen for their voracious appetites, bighead and silver were meant to improve the water quality of aquaculture ponds by consuming microscopic plankton and algae, while grass carp were used to control aquatic plants at the bottoms of reservoirs and black carp to control mussels and snails. Unfortunately, many of the fish escaped captivity. Laying up to 4 million eggs at a time, they reproduce quickly, and in the far-reaching waterways of the Mississippi River System, which extend from the Gulf of Mexico to Minnesota and from Pennsylvania to the Rocky Mountains, they were able to spread and outcompete many native fish species, whose young rely on a steady plankton supply to reach adulthood.

And they continue to spread. Today, bighead and silver carp have been found in the Chicago Area Waterway System—the one of the few links between the Mississippi River System and the Great Lakes Basin—less than nine miles from Lake Michigan, and their DNA has been found in the environment as close as five miles away. With a recreational fishing industry valued at approximately $7 billion, the Great Lakes community has long feared the ecological threat of an Asian carp invasion. The Great Lakes, however, are unlike any environment the fish have ever encountered, either in North America or in their native ranges. In addition to being deeper and colder than the river systems from which they come, the arrival of fellow invasive species the zebra and quagga mussels significantly reduced the amount of plankton in the Great Lakes. As a result, early research suggested Lake Michigan may not possess much suitable habitat for Asian carp. New findings published this summer by Rackham and School for Environment and Sustainability (SEAS) alumnus Peter Alsip and colleagues at the Cooperative Institute for Great Lakes Research (CIGLR) suggests otherwise.

“Asian carp are formidable invaders,” Alsip says. “We know they’re capable of having a significant negative impact on the ecosystem, and we know from their presence in the Illinois River that the risk of introduction to the Great Lakes is high. So the question becomes, can they survive here?” 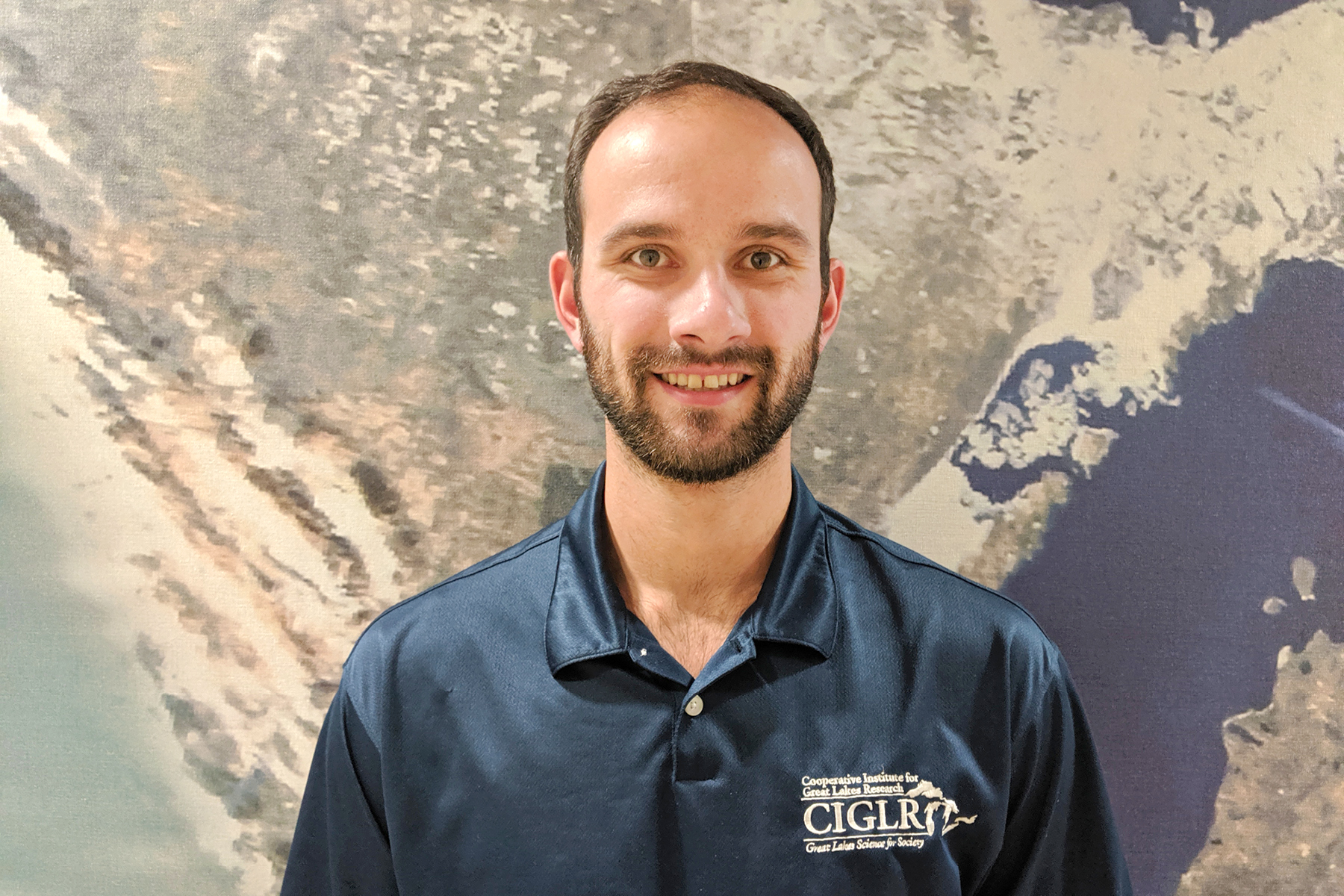 Alsip chose U-M for graduate school because the research opportunities available through SEAS and CIGLR meant he could pursue his long interest in Great Lakes ecology.

Through satellite data and collected water samples from the top meter of the water column, two prior studies found suitable plankton levels for Asian carp only in near-shore habitats of Lake Michigan, particularly near Green Bay, Wisconsin. But while plankton are certainly the preferred sustenance for bighead and silver carp, Alsip points out they are capable of eating a much wider range of food.

“The reality is they’ll feed on what we call detritus—decaying organic material—as well as bacteria and other microorganisms,” Alsip says. “They have a more flexible diet that they can leverage when plankton is less available, and we need to include those factors if we’re going to understand how viable Lake Michigan is for them.”

To answer his questions, Alsip decided he needed to look deeper—280 feet deeper, in fact. Conducting research for his master’s thesis, he combined a three-dimensional model encompassing all of Lake Michigan—which was developed by scientists at the National Oceanic and Atmospheric Administration Great Lakes Environmental Research Laboratory and includes the hydrodynamic and ecological factors that contribute to the potential food sources for Asian carp—with a fish growth rate model. Alsip and his CIGLR colleagues were able to estimate where habitat was suitable for the fish to maintain or increase their body weight at any point or depth in the lake’s 22,000 square-mile area.

“We ran six possible scenarios through our model,” Alsip says. “The most restrictive scenario largely confirmed the findings of past research, but in the most permissive scenario, the one that allowed the fish to eat from any of their food sources throughout the water column, suitable bighead carp habitat became significantly more abundant and even extended into the less productive offshore waters.” 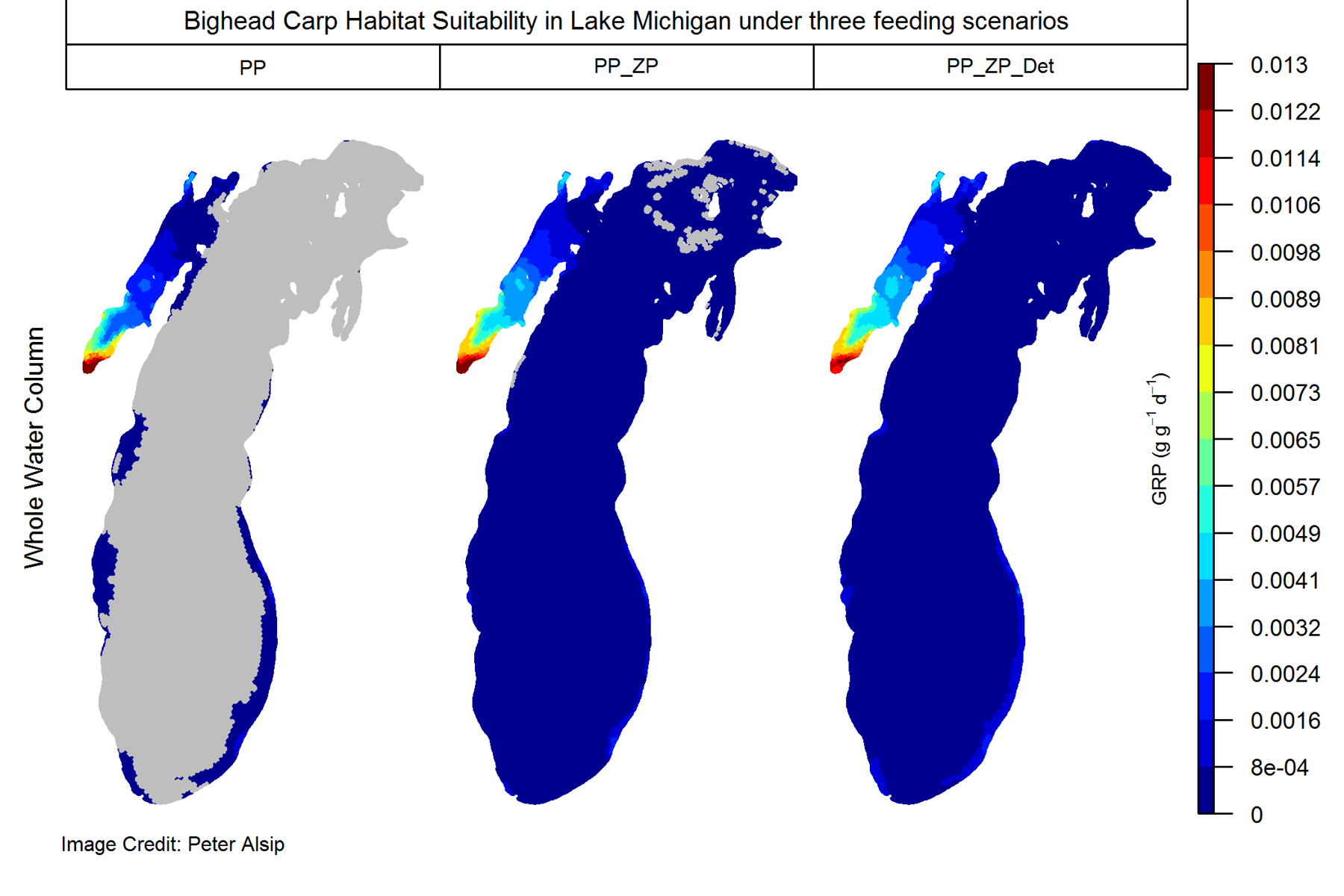 Alsip’s research showed that when only phytoplankton were considered as a food source (left), the potential habitats for Asian carp in Lake Michigan are limited. But when zooplankton (middle) and detritus (right) are considered, their potential range greatly expands.

Alsip’s findings suggests that while the fish will still gravitate toward nearshore areas that contain greater amounts of food, their ability to survive in offshore waters creates migration corridors, which they could use to further spread throughout the Great Lakes basin. Alsip hopes his work will help decision-makers by characterizing the general risk of these fish surviving in Lake Michigan, identifying the most vulnerable habitats, and highlighting how the fish might travel between them.

“These are hardy fish that can fast for weeks and travel incredible distances,” Alsip says. “Pairing those traits with our results showing they can survive in offshore habitats suggests that these fishes could mitigate their weight loss by feeding on a various food sources  as they travel between more ideal locations.”

Since completing his master’s program, Alsip continues to work with CIGLR as an ecological modeling data analyst, applying the skills he acquired in graduate school to other pressing issues facing the Great Lakes.

“The Great Lakes are a fascinating and highly important region,” he says. “They were relatively isolated until we started dredging out the St. Lawrence Seaway and opening the Chicago waterways, and while that brought benefits in terms of trade and commerce, it also suddenly opened this well-balanced system to a whole range of new pressures, including invasive species. We’re trying to use science to understand those pressures and how we might be able to better manage them.”

Alsip was the recipient of a Rackham Conference Travel Grant, enabling him to present his research on Asian carp at the Association for the Sciences of Limnology and Oceanography’s 2018 Ocean Sciences Meeting in Portland, Oregon.