Wireless charging is already taking hold. But imagine charging your home appliances or even your car without a single wire. Rackham electrical engineering student Xin Zan is working to make that—and more—a reality. 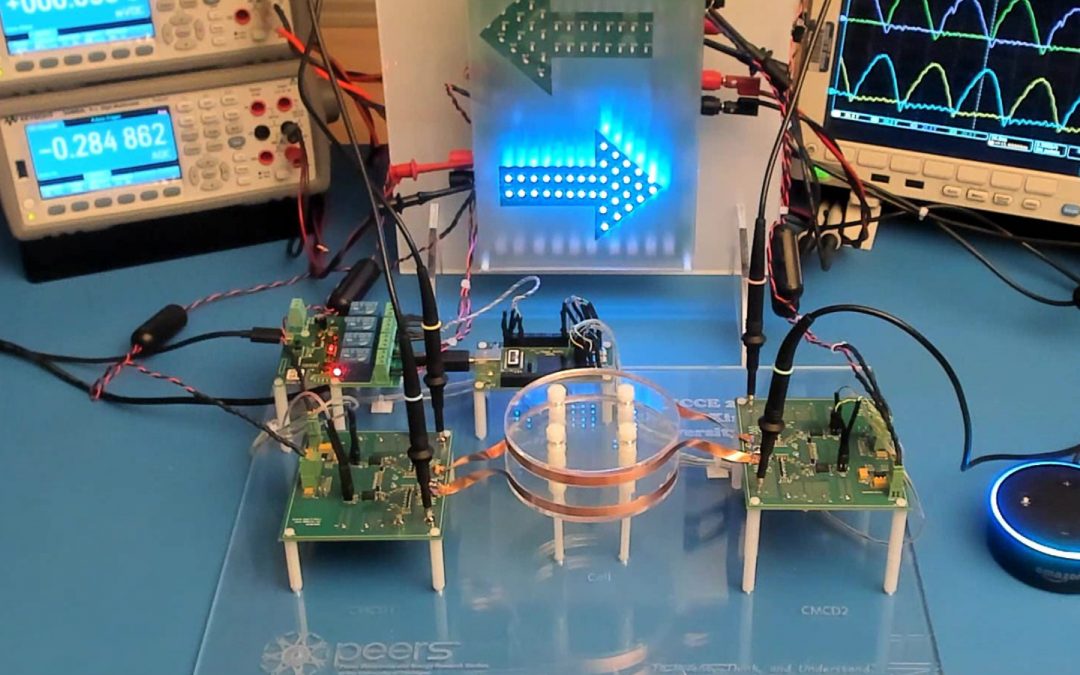 In the last days of the 19th century, inventor Nikola Tesla envisioned a radical new system for distributing electricity around the nation and, ultimately, the world. By constructing a series of antennae and transformers tuned to the same resonant frequency, Tesla believed alternating-current electricity could be transmitted anywhere on Earth, notably without the need for the miles upon miles of electrical cable we rely on even today. After promising trials conducted in Colorado Springs, in 1901 he went as far as to construct the first such antenna facility, called Wardenclyffe Tower, in the village of Shoreham on Long Island, New York. Unfortunately, by 1904 funding for his experiments dried up, and in 1917 the tower was demolished to pay off the rest of Tesla’s debts.

More than a century after Tesla’s dreams for a wireless energy future were literally and figuratively toppled to the ground, a new generation of scientists is applying modern techniques to make them a reality. Among them is Xin Zan, a Ph.D. student in the Department of Electrical Engineering and Computer Science, who works in the field of power electronics with Assistant Professor Al-Thaddeus Avestruz. Zan’s research seeks to bring very-high frequency wireless energy transfer to a wide range of consumer, medical, and industrial applications.

“I’ve long admired Tesla’s work and vision,” Zan says. “I read his autobiography My Inventions when I was young, and always found his ideas for wireless power fascinating. I studied the subject a bit as an undergraduate student at Tsinghua University, China and realized then it was an area I could make a real contribution.”

Zan’s doctoral research focuses on the wireless transfer of high-frequency and very-high frequency alternating-current power, between 3 and 300 megahertz. Capable of supplying devices with power at a higher density and being integrated in smaller, lighter equipment than its low-frequency counterpart, very-high frequency energy holds the most promise for turning wireless energy transfer from a laboratory novelty into a widely used technology, Zan says. The only trouble is that it is considerably more difficult.

Without proper devices, circuitry and other equipment, very-high frequency power quickly loses its power, efficiency, and wireless transfer range. In light of these challenges, Zan has spent much of the past three years building methods and circuits to enable wireless transfer efficiently between devices by turning to an earlier Tesla innovation—resonant inductive coupling.

Pioneered in the late 19th century by Tesla, who used it to wirelessly light lamps with low-frequency electricity in his New York City laboratory, inductive coupling occurs when an alternating current in one wire creates an alternating magnetic field that induces voltage in another nearby wire. When the nearby wire is connected to a load, the power is transferred from one side to another. Through the use of resonant circuits, the power can be transferred at longer distance with higher power and efficiency.

Zan is augmenting this technology through a technique called very-high frequency active/passive segmentation, in which the addition of segmented inductors and distributed capacitors, driven by small, modular circuits, enhance the magnetic flux and allow systems to transfer more energy at greater distances.

“Few people in power electronics have investigated very-high frequency power conversion,” Zan says. “We’re now developing the methods and circuitry that can make this possible. It’s challenging and difficult, but that’s what makes the work exciting.”

If successful, Zan’s work stands to make more than just charging your phone or laptop easier. Electric vehicles could be charged by simply parking on a space outfitted with a conductive pad. Medical implants could be noninvasively charged by placing a device on the skin. Robot systems like drones, which require frequent recharges that ultimately burn out the charging wires, could have their lifespans significantly increased. By eliminating the need for open charging ports, it would allow the use of seamless casings for devices used in extreme environments like the deep ocean and space. And that’s just the beginning.

In recent experiments, Zan explored bi-directional energy transfer, allowing one device to directly charge another. In its current stage, Zan uses the Amazon Echo device and Alexa virtual assistant to redirect energy between two different circuits. He envisions a future, however, where this will allow users to, with a simple voice command, charge one another’s laptops, phones, and other devices from their own without needing a central power source every time.

“In many ways, this is a necessary innovation,” Zan says. “Not only will it improve people’s lifestyles by making their technology more convenient for them, it will make a lot of industrial, scientific, and medical systems safer, more reliable and robust, and longer lasting.”

“A lot of what we’re doing is exploratory research,” he continues. “This is a new region for wireless power transfer work, and we’re digging deeper and further than others have before us. And in turn, we’ll leave better information for those who continue to explore this topic after us.”

Zan has been the recipient of multiple Rackham Travel Grants, allowing him to attend annual conferences in Canada, Europe, and across the United States. He has also participated in numerous Rackham professional-development workshops, including those on improving communication, working with mentors, and writing diversity statements. He also appreciates the support and camaraderie he has found in Rackham’s graduate-student social community.