The COVID-19 pandemic has seen great reductions in travel, a major source of the carbon emissions that drive climate change. Sustainable systems master’s student Nate Hua is working to help the university reduce its own travel impact in the future. 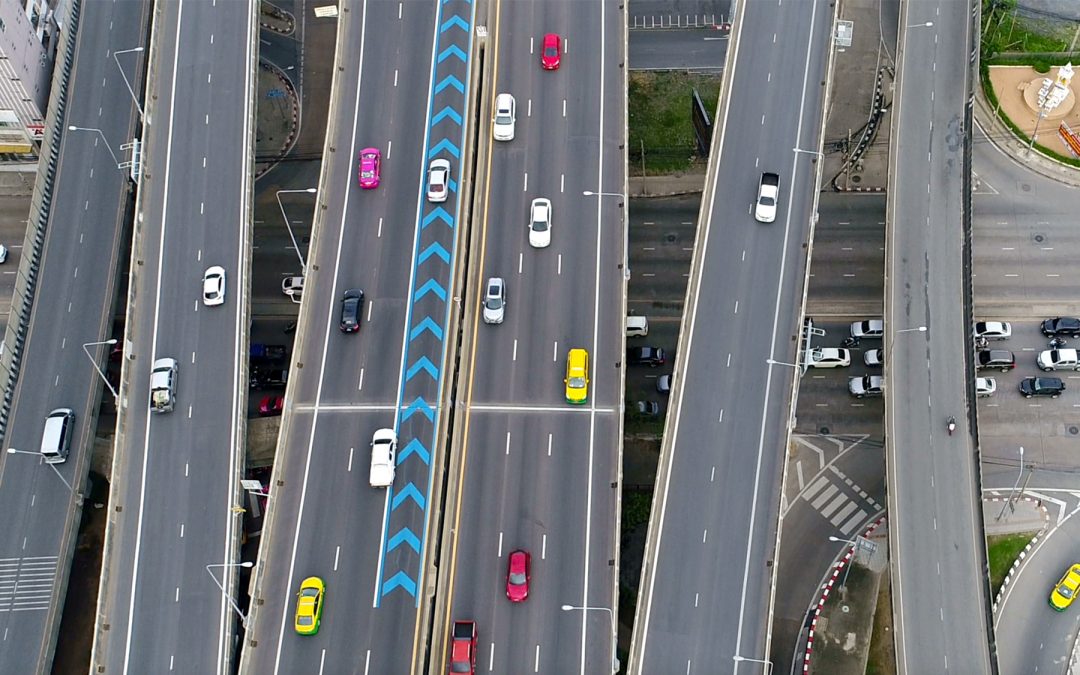 According to a recent study published in Nature Climate Change, carbon dioxide emissions in April fell by 17 percent compared with the previous year, the sharpest decrease since researchers began recording global carbon emissions. As carbon dioxide is one of the primary greenhouse gases driving climate change, this is good news for the environment, even if its cause has had serious consequences for global society—the COVID-19 pandemic.

Travel accounts for approximately 29 percent of greenhouse gas emissions in the United States, according to the U.S. Environmental Protection Agency. As COVID-19 spread around the world, the national lockdowns that followed saw factories shut down, businesses shutter, and people remain in their homes. This left travel by road and by air with a much reduced carbon footprint.

Nate Hua is no stranger to the impact of travel on the climate. After completing his undergraduate studies in chemistry at the University of Iowa in 2016, he embarked on a world-spanning backpacking odyssey, journeying from the Great Plains of the United States as far as the banks of China’s Li River. As he did, he was met with an increasing awareness of the impact traveling can have not only on those who do it, but on the environment around them.

“The time I spent traveling after undergrad was very rewarding, the best part of my life so far,” Hua says. “But the whole time, I was conscious of the footprint I was leaving behind. Traveling involves two different ideas—consumption and preservation—that are often seen as at odds. I realized I wanted to make them more synergistic.”

His globetrotting concluded, Hua found himself drawn to the U-M School for Environment and Sustainability (SEAS), where he recently completed his master’s degree focusing on sustainable systems and worked as a research assistant in the U-M Center for Sustainable Systems.

Travel has remained at the forefront of Hua’s work. As a graduate student, his research examined the regional sustainability of supply chains in the American automotive industry, specifically for steel and aluminum—the primary metals used to produce light duty automobiles of every kind—and their energy demands.

“We really wanted to answer the question, where do these metals come from?” Hua says. “Not all steel or aluminum is created equal. There are different processes to produce different kinds of each. Those processes require different levels of energy, and the greenhouse gas emissions associated with energy production—electricity in particular—varies by region. That means the environmental impact for producing these metals changes based on how and where you manufacture them.”

The manufacture of automotive aluminum, for example, requires a great deal of electricity. When conducted in regions like Quebec, where much of the power grid consists of renewable energy in the form of hydroelectricity, this process involves relatively little in the way of carbon emissions. For the same process to be carried out in the U.S. Midwest, where coal and natural gas remain the major sources of electricity, the emissions are much higher.

Through a combination of market research and a process called material flow analysis, Hua and his colleagues in SEAS were able to map out the regional sources for both metals entering the American automotive industry and evaluate the implications of power sources in those regions for the sustainability of both metals. Hua hopes his findings will help the automotive industry make more informed decisions about where to source its materials.

“If you know where your materials come from, you can better evaluate the life cycle impacts of the vehicles you build,” Hua says. “By taking this data into account, auto producers can make decisions to improve the sustainability of the entire industry from the very first step in the manufacturing process.” 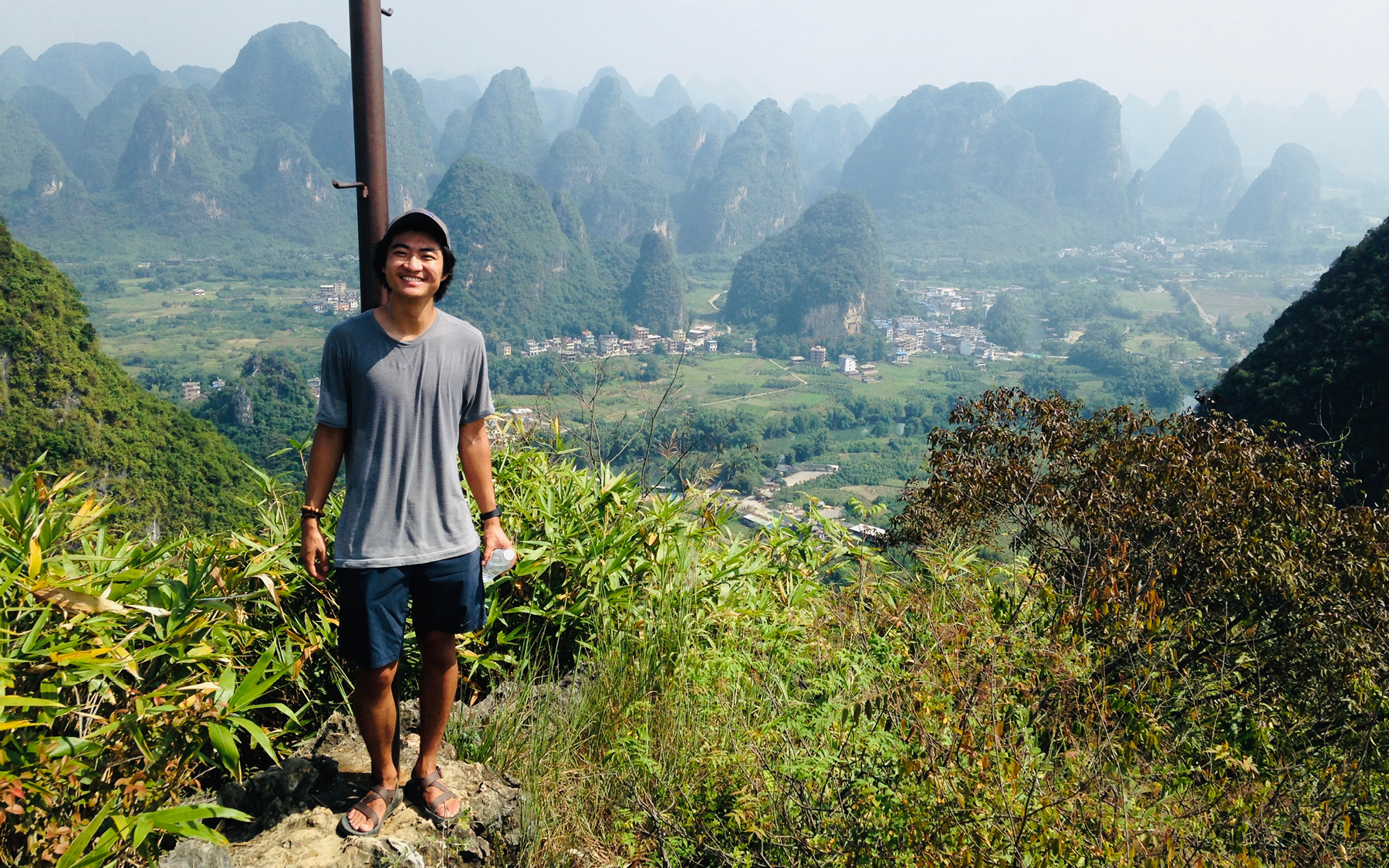 Hua, pictured here in Guilin, China, learned about the importance of balancing consumption and preservation during his travels.

As Hua was working toward helping the auto industry improve its sustainability, U-M was preparing for a more sustainable future of its own. This culminated in the formation of the President’s Commission on Carbon Neutrality in January 2019, which brought together U-M specialists and regional partners to explore ways for U-M to reduce its carbon emissions to more sustainable levels. This included the creation of nine teams to analyze the sustainability of nearly every aspect of university life, from the energy efficiency of campus buildings to food served in U-M dining halls.

With his combination of interests and research experience, Hua knew there was one team where he could make a particular difference—the travel analysis team. Aimed at studying the impact of all university-paid travel—a separate team was convened to investigate other forms of travel, like employee commuting—from flights to international conferences to road trips and out-of-town meetings, the team spent much of the last year compiling data from numerous sources around campus in order to evaluate and model it.

“We looked at all modes of transportation the university used in 2018, including planes, trains, buses, and cars,” Hua explains. “Each of those modes has different factors associated with it that affect emissions, like the type of gases they emit, the distances they cover, and their occupancy.”

As they completed their research, Hua and his colleagues found that U-M travel resulted in approximately 45,000 metric tons of greenhouse gases being emitted in 2018, which is about seven percent of the university’s total on-site and electricity emissions. While Hua says that number sits at the lower end of what they expected to find, it remains a large figure. To help bring it down, the team made several recommendations to the university that included centralizing data on university travel and building both awareness of alternatives to traveling to in-person meetings, as well as the infrastructure to support them.

That last point has been made all the more poignant by the increasing reliance on virtual technologies in the wake of COVID-19.

“The climate we find ourselves in now has, unfortunately, caused us to have to think about alternatives to travel even more,” Hua says. “Almost everything has gone online now, and it’s become an interesting pilot as we wrapped up our research.”

While the team recognizes travel is often both important and necessary, Hua says measures like university-wide implementation of 5G wireless networks and the creation of conference rooms specifically for virtual meetings would help facilitate a shift to virtual meetings where they’re appropriate. Overall, he hopes their recommendations will help drive U-M toward greater sustainability.

“The move toward carbon neutrality is a major endeavor, but it’s a very important one that needs to be made,” he says. “Being able to support that move as a student by applying the skills I learned here has been really meaningful and rewarding.”