Fighting for Their Memory 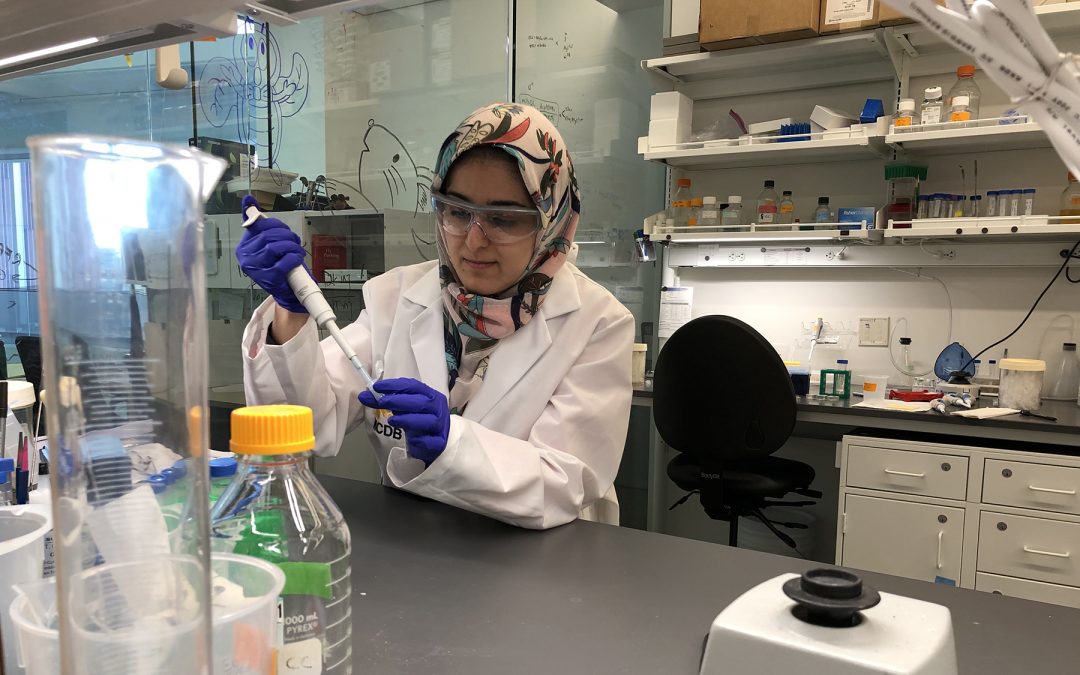 Today, more than 50 million people live with Alzheimer’s disease, or a related form of dementia, worldwide. As world populations age, that number is expected to nearly double every 20 years, according to Alzheimer’s Disease International, with other age-related neurodegenerative diseases seeing a similar rise. While expensive to treat—the global cost of healthcare for neurodegenerative diseases already stands at approximately $1 trillion—over half of the patients live in low- and middle-income countries where the question of affording basic care does not always have a ready answer.

For Elham Asghari Adib, 2019 Barbour Scholar and doctoral student in the Department of Molecular, Cellular, and Developmental Biology (MCDB), neurodegenerative disease is not just a matter of statistics. Growing up in Iran, she watched as her aunt succumbed to Huntington’s disease, an incurable genetic condition that progressively breaks down the nerve cells of the brain and often manifests suddenly in a person’s prime years. Seeing firsthand the devastating effects neurodegenerative disease wreaks on patients and their families, Adib committed herself to finding new ways to help them.

“We visited my aunt often, and I literally watched her go through all that pain, from being herself to being bedridden,” Adib recalls. “It’s not something you learn to deal with over time, you just suddenly lose everything you have all at once. That experience is what really pushed me to study this, I felt like I was wasting my time doing anything else.”

Too Much of a Good Thing

Adib applied for graduate school at several different universities, but the diversity of its research ultimately drew her to MCDB at U-M.

“At the time, I wasn’t sure if I could change to study neuroscience, so I was searching for departments that would let me get as close to it as I could,” Adib says. “The MCDB department was the best choice by far, it has a diverse group of faculty working on a wide range of topics, including the kind of research I want to pursue.”

Adib’s research focuses on the role of MAP3K12, better known as dual leucine zipper kinase or DLK, in neurodegenerative diseases like Alzheimer’s and ALS. An enzyme that plays an important role in the development and repair of the mammalian nervous system, it can end up playing the part of a double-edge sword.

When an injury results in nerve damage, the DLK enzyme activates to begin the process of healing the damaged tissue. Or at least, that’s what it’s supposed to do. While DLK fulfills its role admirably in the peripheral nervous system—the circuitous network of nerves that regulates the body’s involuntary functions and conveys sensory information to the brain—when it becomes active in the central nervous system, it has the exact opposite effect—cell death. The loss of nerve and brain cells, in turn, leads to neurodegenerative conditions like Alzheimer’s and ALS.

Furthermore, a colleague in Adib’s lab discovered DLK can activate as a result of any significant stress on the nervous system, not just due to injury.

“The duality of DLK’s role is fascinating,” Adib says. “I’m trying to understand that duality so that we can improve quality of life for the people living with these conditions.”

Using sciatic nerve crush, a commonplace procedure in the study of nerve regeneration, Adib studies the role of DLK in the healing of motorneuron damage in mice, chosen because these are the neurons most affected by ALS. By incorporating a new technology called RiboTag, Adib is able to tag specific protein compounds in the nerves and track the activation of DLK. This allows her to follow the enzyme’s impact on every part of the regeneration process and better understand its behavior.

Gaining a more precise understanding of how DLK functions in the body will allow scientists to produce and prescribe DLK inhibitors for patients suffering from neurodegenerative diseases. Previous research has shown that by blocking the enzyme from activating, DLK inhibitors can prolong the time period before cell death takes hold, giving them an extended period of health.

“It’s not a heaven-and-earth difference, but these technologies can increase the amount of time someone has normal neuronal activity, and therefore full use of their motor skills and memory,” Adib says.

Taking It on the Road

As a 2019 Barbour Scholar, Adib looks forward to being able to focus solely on her research as she enters the final year of her Ph.D. program.

“Just not having to worry about funding is amazing,” she says. “It’s an honor to receive, and puts my mind at peace. I’ll be able to concentrate exclusively on my work.”

Upon completing her program, Adib plans to return home to Tehran, where she hopes to bring the skills and experiences she acquired at U-M as a university faculty member, starting her own lab to continue her research. She also hopes to build the kind of diverse, inclusive environment she experienced while at U-M.

“Back home, we have many different dialects outside the capital city,” Adib says. “A lot of people who come to study at the university have trouble adjusting to life in the city. You need help to assimilate to your new surroundings and learn that you’re fine being different. That’s something I learned here, and I want to bring that with me.”

Adib was the recipient of two Rackham Travel Grants, allowing her to attend the Society for Neuroscience and Cold Spring Harbor Laboratory conferences. She also received a Rackham Pre-Candidate Grant, which enabled her to purchase reagents needed for her experiments.