There’s no mistaking when it’s cold outside, but how our bodies know that has been an open question. Molecular and integrative physiology Ph.D. student Elizabeth Ronan is working to understand where that chilly feeling comes from. 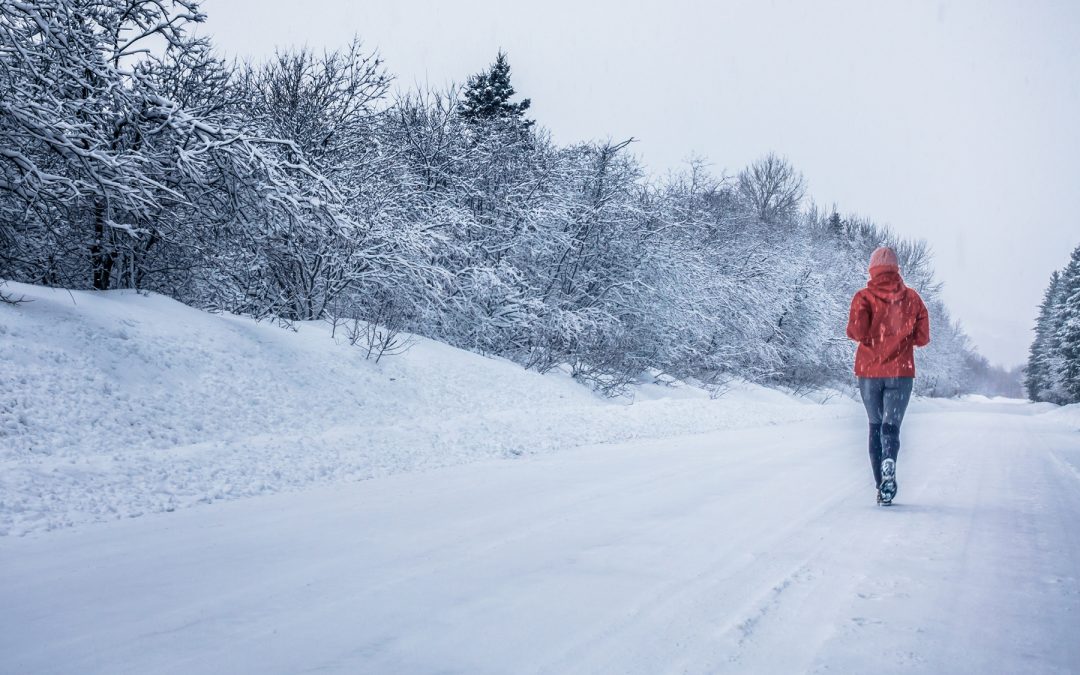 The ability to sense temperature is essential for the survival of humans and most other organisms. Being able to feel when, and in which direction, the temperature is changing tells us when to seek shelter, bundle up, or pay more attention to how much water we’re drinking. Understanding how our bodies convey this critical information about our surroundings has been the subject of considerable research over the years, with important implications for medical therapies and pain management.

These efforts have yielded significant progress in understanding how the body senses heat. Scientists have been able to produce experiments that pinpointed the body’s heat receptors, as well as how they function. Administering cold with similar precision has proven much more challenging, however, and as a result there has been much less progress on the opposite end of the thermometer. While past research has identified one cold receptor—called TRPM8—it only activates at around 26 degrees Celsius (about 79 degrees Fahrenheit), and anyone who’s endured a mid-December polar vortex knows the body is capable of feeling much colder temperatures. Thanks to a new approach and the creative adaptation of existing lab technologies, however, Department of Molecular and Integrative Physiology Ph.D. student Elizabeth Ronan and her colleagues in the lab of Shawn Xu, the Bernard W. Agranoff Collegiate Professor in the Life Sciences, have finally begun chipping away at this long-frozen question.

“Cold sensitivity has been a long-term project in our lab,” Ronan says. “Past research has shown receptors for cool temperatures, but this research is the first time a sensor for noxious, painful cold has been found to exist in nature.”

As is often the case, the key to deciphering the riddle of cold sensation came from one of the most unassuming places, in this case a diminutive roundworm named Caenorhabditis elegans, commonly known as C. elegans. Widely used as a model organism in research, C. elegans possesses an easily manipulated genetic code, with at least 70 percent of its genes highly conserved in higher-order species, including humans. In addition, and with particular importance for Ronan and her fellow researchers, the worm is the only organism for which scientists have a complete connectome—a comprehensive map of every connection between neurons in its body, akin to a wiring diagram for a living organism. 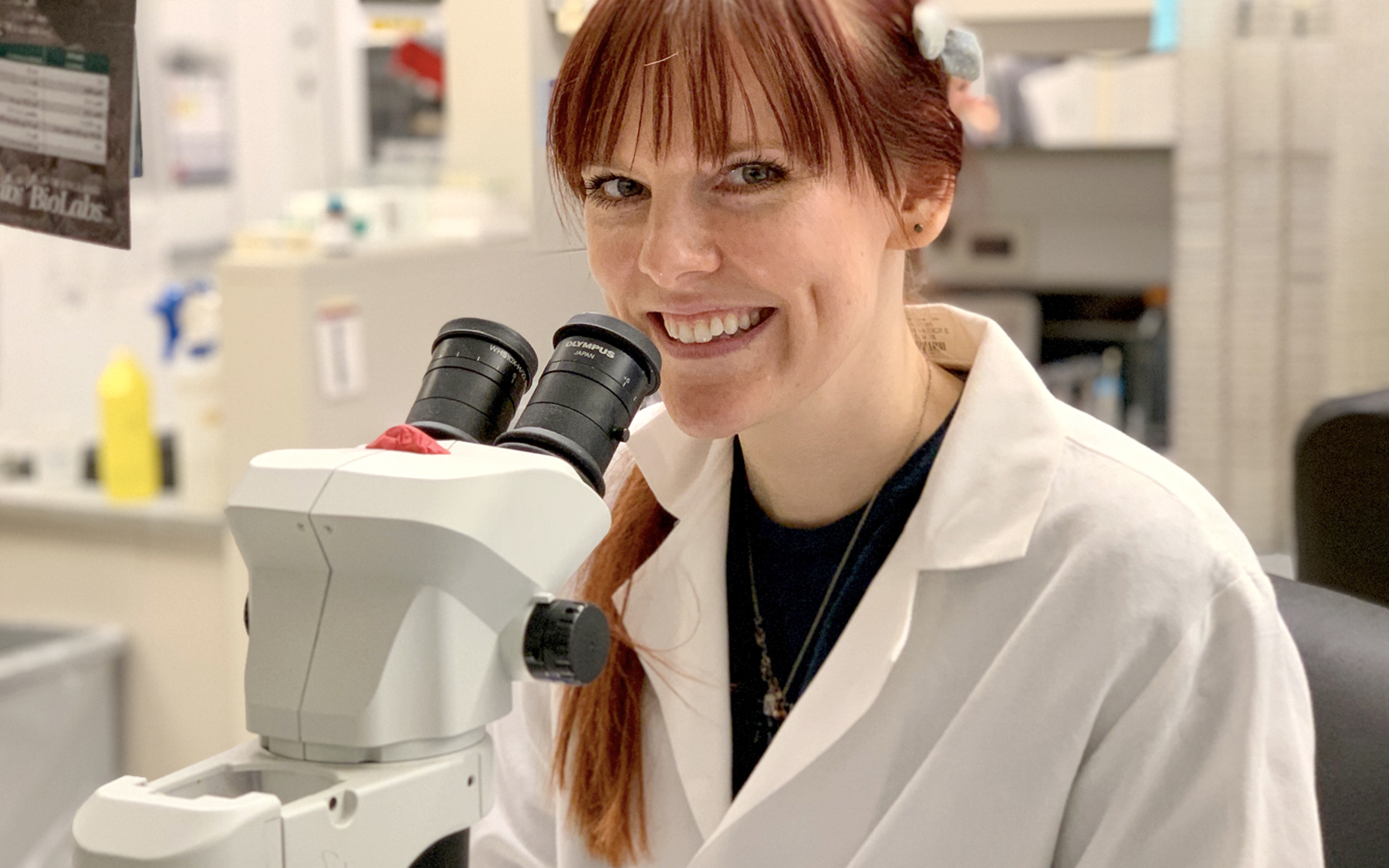 “Sensory biology is fascinating because we have all these sensory cues that shape our reality,” Ronan says. “Going deep to our most basic mechanisms is very satisfying.”

“C. elegans is ideal for exploring basic, evolutionarily conserved mechanisms,” Ronan explains. “Because its genome is relatively simple, it’s a lot easier to identify new genes that would be much harder to find in more complex species. Combined with knowing how every one of its neurons are connected, it’s an ideal model for sensory biology.”

That still left the question of having the right technology, the same issue that had plagued cold sensation researchers for years. Fortunately, C. elegans provided an answer for that, too.

Previous work in the Xu lab identified that the intestine of C. elegans is cold-sensitive, playing an important role in extending its lifespan under cold temperatures. The researchers discovered that in cold environments, the genes mediating longevity are activated, extending its lifespan at low temperatures. This discovery presented an ideal way to perform an unbiased genetic screen for the elusive cold sensor.

Many labs that host biological, genetic, or biomedical research employ devices called quantitative polymerase chain reaction (qPCR) thermocyclers. Conventionally used to amplify and quantify DNA, qPCR thermocyclers are capable of rapidly heating and cooling dozens of test tubes at once while measuring fluorescence intensity to quantify gene expression level. And it didn’t escape the team’s notice that C. elegans were just about the right size to fit in a test tube.

To identify new cold sensing genes, the team placed C. elegans specimens expressing GCaMP—a genetically encoded calcium indicator that increases in fluorescence when activated—in the intestine directly into the qPCR test tube wells, and observed that upon cooling in the thermocycler they could detect an increase in intestine fluorescent intensity. Taking advantage of its easily manipulated genome, they then generated 30,000 unique mutant strains of C. elegans. With one strain in each of the thermocycler’s 96 test tube wells, they dropped the temperature and observed which worms responded to the newly frigid conditions and which did not. The researchers identified that those lacking cold responses possessed mutations in the gene encoding a glutamate receptor called GLR-3.

In response to sudden drops in temperature, worms with normal GLR-3 functionality increased what Ronan calls avoidance behavior—the worms began to move backward and turn, looking for an escape to more favorable conditions—while mutant strains that did not showed no change. Further experiments conducted by Ronan confirmed that GLR-3 was required for the cold avoidance response.

“We found that GLR-3 activated at 18 degrees Celsius, well below the threshold of the cool sensor TRPM8,” Ronan says. “These experiments showed its importance for noxious cold sensing, now we had to see if it was filling the same role in other species and, ultimately, how it was doing so.”

Mice, fish, and humans all possess a homolog—a gene related to another gene by common ancestry—to GLR-3, called GluK2. In order to test whether GluK2 provides the same service as its ancestral counterpart, Ronan and her colleagues conducted heterologous experiments—in which scientists express genes in cell lines—on all three homologs and confirmed that their expression does, in fact, confer cold sensitivity just like GLR-3 in C. elegans. The team also confirmed that DRG neurons—peripheral sensory neurons in mammals that detect a variety of external stimuli—in mice also depend on GluK2 for their response to cold.

Ronan says additional research to determine how exactly GLR-3 and GluK2 sense cold is already under way. That research could eventually lead to better medical therapies, but it’s already yielded a more complete understanding of how the body functions.

“We’re laying the foundation for understanding the mechanisms that drive cold response that future research and future scientists can use to directly benefit human health,” Ronan says. “We’ve provided a big missing piece in temperature sensation, one that can help us understand how our own bodies survive and function.”

Ronan is a recipient of two Rackham Conference Travel Grants, enabling her to attend CeNeuro, a 2018 conference on C. elegans neurobiology and behavior in Madison, Wisconsin, as well as the 2019 International C. elegans Conference in Los Angeles. She has also received the Rackham Graduate Student Research Grant to support her research.