2019 Barbour Scholar Bian Wang is uncovering the prehistoric ecology of the Great Plains through an unlikely source—fossilized teeth. 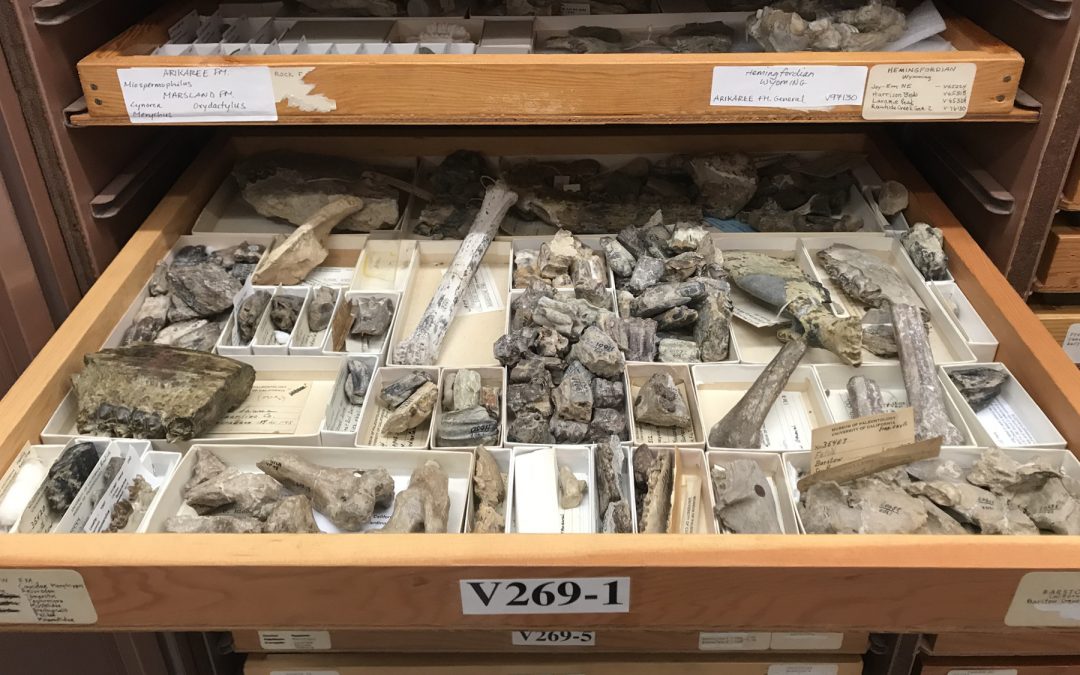 The Great Plains region of North America is famous for its wide-open spaces, uninterrupted horizon, and amber waves of grain, but 16 million years ago, during the Miocene epoch, the world was a much warmer place, and this vast country was much more forested than it is today. Changes in the Earth’s climate saw the forests that once covered much of the continent give way to seemingly endless rolling grasslands, but if the landscape might have felt familiar to us, the species that populated it would certainly not.

The large hoofed mammal, or ungulate, community of the Great Plains was much more diverse during the Miocene than it is today. Rhinoceroses and camels roamed alongside antelope and peccaries, as well as horses, which would vanish from the continent sometime around the last ice age and not return until brought by Spanish explorers in the 16th century. While the fossil record testifies to the existence of all of these creatures, discerning how they interacted with one another and their environment in the distant past—termed paleoecology—is not always straightforward. That’s something Bian Wang hopes to understand through her research.

“Paleoecology is less about what prehistoric animals were and their evolutionary history and more about what they did when they were alive, how they related to their environment, and how they responded to changes in it,” says Wang, a 2019 Barbour Scholar and doctoral student in the Department of Earth and Environmental Sciences. “It also asks very different questions than modern ecology. We can make observations about the environment today, but just figuring out what the environment was like in the past is a challenge.” 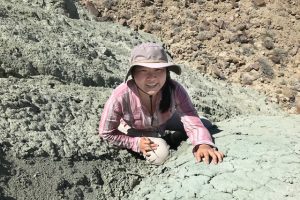 Long in the Tooth

One of the key elements of any ecosystem, modern or prehistoric, is the plant life that forms its backbone. In order to gain a better understanding of what this looked like in the Great Plains during the Miocene, Wang studies the teeth of the ungulates that ate them.

Mammal teeth have two characteristics that make them particularly valuable for Wang’s work, the first being their highly distinctive nature.

“Different mammals have very different teeth,” Wang explains. “Most reptiles have simple, conical teeth, for example, but human teeth versus dog teeth versus horse teeth are extremely different from one another. Their teeth are highly adapted to particular dietary needs, and we can use that to identify extinct mammals.”

The second characteristic is that while most remains are altered by the fossilization process, their organic materials broken down and remineralized, the crystalline structure of teeth is so large and dense that the teeth themselves remain relatively unaltered chemically, even after tens of millions of years have passed.

Through the use of a relatively young approach to paleontology called stable isotope ecology, Wang is able to analyze the chemical signature of fossilized teeth to learn about what the animal ate and drank. By examining the ratio of heavy to light carbon isotopes, Wang can tell what kinds of plants a given animal was eating, while the ratio of oxygen isotopes suggests the animals’ primary source of water—whether it acquired most of its water from its food or from liquid sources like lakes and streams—and, even more specifically, where those water sources may have been located.

“Large herbivores are really important components of the North American mammal community over much of the last 50 million years,” Wang says. “Animals usually track a suite of environmental variables, so by identifying what they were eating and where their water sources were, we can learn a lot about the landscape and climate of the time.”

Wang’s research may shed light on contemporary concerns, as well. The time period on which her work focuses played host to the Mid-Miocene Climatic Optimum (MMCO), one of the Earth’s last major global-warming events. Over 10 million years of cooling and increased drying following the MMCO led to major disruptions for ungulates and reduced species diversity on the Great Plains. By studying how the prehistoric ecosystem changed, her work can help inform our knowledge of both the cause and effect of climate change.

“The ultimate goal of studying the past and present is to prepare us for the future,” Wang says. “Studying paleoecology and the paleoenvironment teaches us a lot about climate science and gives us insight on the impacts of climate change today, which happens at a much faster rate than natural climatic changes, leaving species less time to adapt.”

Many museums in the United States boast vast fossil collections. Some collections, like those at the American Museum of Natural History, are over a century old, comprised of floor-to-ceiling cabinets and drawers of material just waiting for itinerant researchers to make use of them. Wang travels to these museums, searching through the cataloged finds for the specimens her research needs, taking measurements and photographs to bring back to U-M. She also uses a dental drill to collect very small samples of fossilized material for stable isotope analysis.

Once her program is completed, Wang hopes to take what she has learned at U-M back home to China.

“China has an amazing fossil record, but relatively few paleontologists,” she says. “I want to establish my career there because I think it’s where I have a lot I can contribute.”

As a 2019 Barbour Scholar, Wang will be able to focus solely on her research during the final year of her Ph.D. program.

“Being a Barbour Scholar is going to help me immensely,” Wang says. “I’ve always enjoyed teaching classes while here at Michigan, but it also requires a significant time commitment. Having the Barbour’s full support for my last year will allow me to dive into my research completely.”

In addition to her Barbour Scholarship, Wang has been the recipient of Rackham Conference Travel and Graduate Student Research Grants, which helped her conduct her research, attend conferences, and provided opportunities to build her academic network.