Home » Discover Rackham » Into the Field: Mixing Memory with Method

Into the Field: Mixing Memory with Method

I’ve returned to Ann Arbor after a year and a half in Greece, and I still struggle to settle back into my usual triage of office, library, home. It seems fitting, then, to pay homage to fieldwork, complete with some maternal advice, of course.

Fieldwork is a very specific type of madness, at least if it takes place in rural Greece. After six weeks of living in each other’s pockets, everyone goes a little stir crazy. Yet, most of us will return the next summer, and the next. You learn an awful lot about someone if you share a room with them in 100-degree heat pulling 14-hour workdays. People that I see for a few weeks a year know things about me my mother doesn’t. People fall in love, people scream at each other, people do jazz improv at 3pm on a Tuesday, people get divorces. It’s that kind of crazy.

Even if you’re the most cool-headed person, understand that you will get emotional, and angry, and whatever it is you do when you’re pushed to the brink. Nowadays, I warn people beforehand that I will at some point scream at them, and tell them I won’t fully mean it. They laugh, until I scream at them. Be quick with an apology and be more forgiving towards others than you might usually be. If you can’t find genuine sympathy and forgiveness in you, remember that these people will remain your colleagues, whether you like it or not – best get along with them. Burnt bridges might feel satisfying in the moment, but you’ll usually realize there’s a river you need to cross sooner rather than later.

Things break, along with people. There is a strange satisfaction in clearing vegetation until the handle of your axe snaps, and even that one time the van’s brakes broke – and the power steering broke, and the ignition broke, and all the doors broke, and the underbelly broke – nearly sending everyone colliding into the highway divider in a ball of flames, becomes a funny story before the adrenaline’s worn off. People mostly get heat sickness and burns, but there are occasional allergic reactions to freakish mosquitoes and detaching toenails from scrambling over limestone cliffs to spice things up.

Sometimes entire governments break: I had a colleague who needed to be evacuated from Egypt, and Syria…well, let’s not even go there. Having a back-up plan is not a bad idea. At the very least, assume you will never get everything you wanted done, you will never get as much data as you’d like, and you’ll always run out of money sooner than you’d like. Build these considerations into your fieldwork plan, even as you (naturally) want to push to get as much done as possible.

Then there are the “locals,” the “natives.” Classical archaeologists are the best and the worst anthropologists. We bumble about blissfully free of the post-modern colonialist guilt paralyzing some of our more theoretically enlightened colleagues, but there is a sweet innocence to it. We don’t ogle the habits of those around us with the zoologist enthusiasm of ethnographers. Instead, they ogle us: a group so hopelessly clueless that even the most outrageous breach of propriety is met with only sympathetic laughter, like you would laugh at a dog humping a table leg.

Cultural differences happen, and not always in the way you’d think. Sometimes you’ll learn about American hipster subcultures from a Greek. Sometimes you won’t learn a thing, or you think you have learned something but have completely missed the point. Be cognizant of how much the people around you are accommodating you, and how much you are accommodating them. Try to actually get to know some of these people. This is a topic suited for a book, not a blog subsection.

The work, if I’m honest, feels almost incidental. This is not the time for deep reflection. This is the time to scrape and shovel and wheelbarrow and pickaxe. This is the time to take close measurements but always through a haze of exhaustion that keeps you from actually comprehending what it all means. I gently scoop out dirt from human skulls while bobbing my head to Kendrick Lamar and only sporadically smile at the absurdity of my condition, mostly too lost in nuchal crests and King Kunta’s yams. This is why we like forms and routines: even the most delirious of minds can tick boxes, boxes to be crafted into beautiful graphs and hypotheses with the luxury of A/C and a desk that isn’t a rickety restaurant table surrounded by old men chain-smoking and staring.

Prepare for all kinds of contingencies beforehand and walk through your research plan, methods, and recording plan step by step, down to the most tedious detail. Do a practice run with made-up data. Save heavy intellectual labor for when you’re back home and rested. Complex decisions made in the field tend to be bad ones. When in doubt, collect more data rather than less.

And at the end of the season, what are you left with? Some ragtag data that can be stitched together into something resembling a robust dataset, hopefully. But mostly, you’re left with nostalgia, literally the pain of home-coming. After the initial rush of clean showers! A/C! privacy! has worn out, there’s a sense of emptiness. You find yourself missing the roosters at 5am that made you want to become a carnivore again. The pine-resin wine just doesn’t taste the same when you’re not looking into blood-shot, exhaustion-bleary eyes as you toast. You bump into someone on the subway and say συγγνώμη instead of ”sorry” by accident. Even your research rings hollow somehow: how is this all you have to show, when you really learned so, so much more? 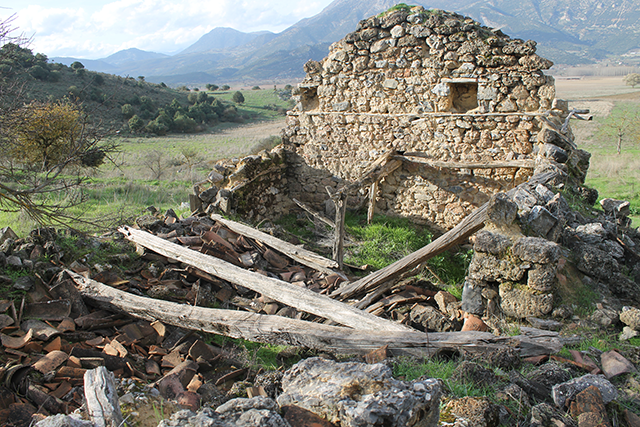 Ithaka, with nothing left to give. Actually an abandoned house near Stymphalos.

Ithaka gave you the marvelous journey.
Without her you would not have set out.
She has nothing left to give you now.

And if you find her poor, Ithaka won’t have fooled you.
Wise as you will have become, so full of experience,
you will have understood by then what these Ithakas mean.
– C.P. Cavafy, translated by Edmund Keeley and Philip Sherrard

U-M has a ton of funding opportunities for fieldwork, although not all of it is easy to find out about. The International Center’s website is a good starting point.