Home » Discover Rackham » It Takes a Village—and an Engineer

It Takes a Village—and an Engineer 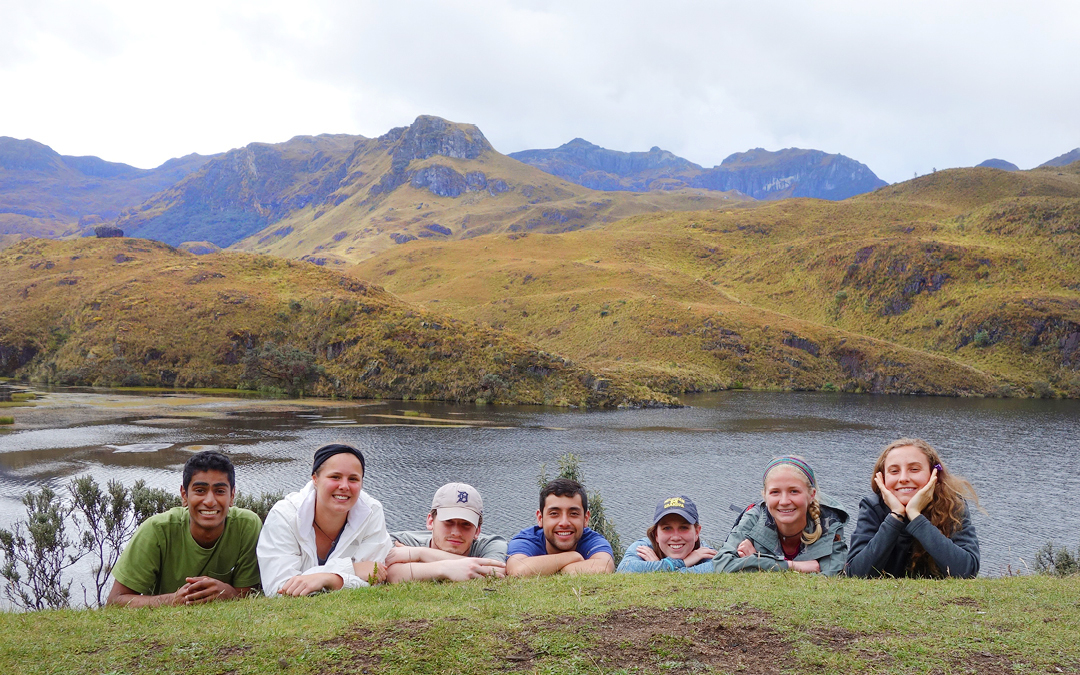 On April 16, 2016, just before 7:00 p.m., the Nazca tectonic plate slid beneath the South American plate some 13 miles beneath the surface of the Earth. The seismic activity set off the largest earthquake to strike Ecuador since 1979, a 7.8-magnitude convulsion that rocked the entire coastline and triggered a tsunami alert for nearby Colombia, Peru, Costa Rica, Fiji, and Panama. Several hundred fatalities were estimated within the first 30 minutes. By the time the last of the earthquake’s 55 aftershocks settled the following day, 676 people had been killed, 16,600 were injured, and the damage to buildings and infrastructure totaled in the billions of dollars.

Seven months later, Rackham student L. Sebastian Ojeda (B.S. ’18) returned home to Loja, Ecuador during winter break and saw the damage for himself. In part because their location makes them prone to frequent disasters—though few so costly as the 2016 earthquake—the rural coastal communities of Ecuador have seen little investment. What little infrastructure they had was severely damaged, and with no government-funded relief program for natural disasters, the communities had little recourse to make repairs. One of the most pressing concerns Ojeda noted was a significant uptick in waterborne illness, caused by damage to the region’s already fragile water-treatment systems, and it was an issue he decided to do something about.

“They never received any sort of support to rebuild or repair their infrastructure, so they had no sustainable way of getting potable water for their households,” says Ojeda, a master’s student in the U-M Department of Chemical Engineering. “I realized this problem wasn’t so much caused by the quake as it was exposed by it. That’s when I decided I wanted to form an engineering team to help fix it.”

During the junior year of his undergraduate studies at U-M, Ojeda participated in a study-abroad program at the University of Technology of Troyes (UTT) in France, focused on sustainability and ecology. This experience gave him many of the tools and skills he would later apply to the problems faced by Ecuador’s coastal communities.

“I learned a lot that summer,” he recalls. “I had all these ideas, but until I got to France and started working on water treatment and sustainability, I had no idea how feasible they were. It turns out water purification itself isn’t very difficult, technologically, and can be achieved thanks to some easily available resources.”

When Ojeda returned to Michigan in the fall, he and six fellow engineering students who also attended the UTT program formed Team Aquador. They spent the rest of the academic year identifying and researching the areas of Ecuador most critically impacted by the earthquake, organizing their team, and gathering funding for the project. Then, they hit the road.

In May 2018, Ojeda and the rest of Team Aquador embarked on a country-spanning needs assessment of Ecuador. Visiting numerous communities, Ojeda and his team were considering multiple projects to address the water needs of the region, from full water-treatment systems for coastal schools to small, mobile, water-treatment packs for use by first responders to disaster areas. Ultimately, however, the team decided to take a more focused, socially engaged approach.

“I didn’t want this to be a short-term solution, where we showed up and gave them a filter and then left,” Ojeda says. “I realized over the course of our first year that the best organizations that do this sort of work don’t go in with a ready-made solution; they go in to empower people. We decided we wanted to work in a community with critical water needs, work with them, understand the needs of their daily and cultural life, and design something they could themselves build, implement, and maintain. 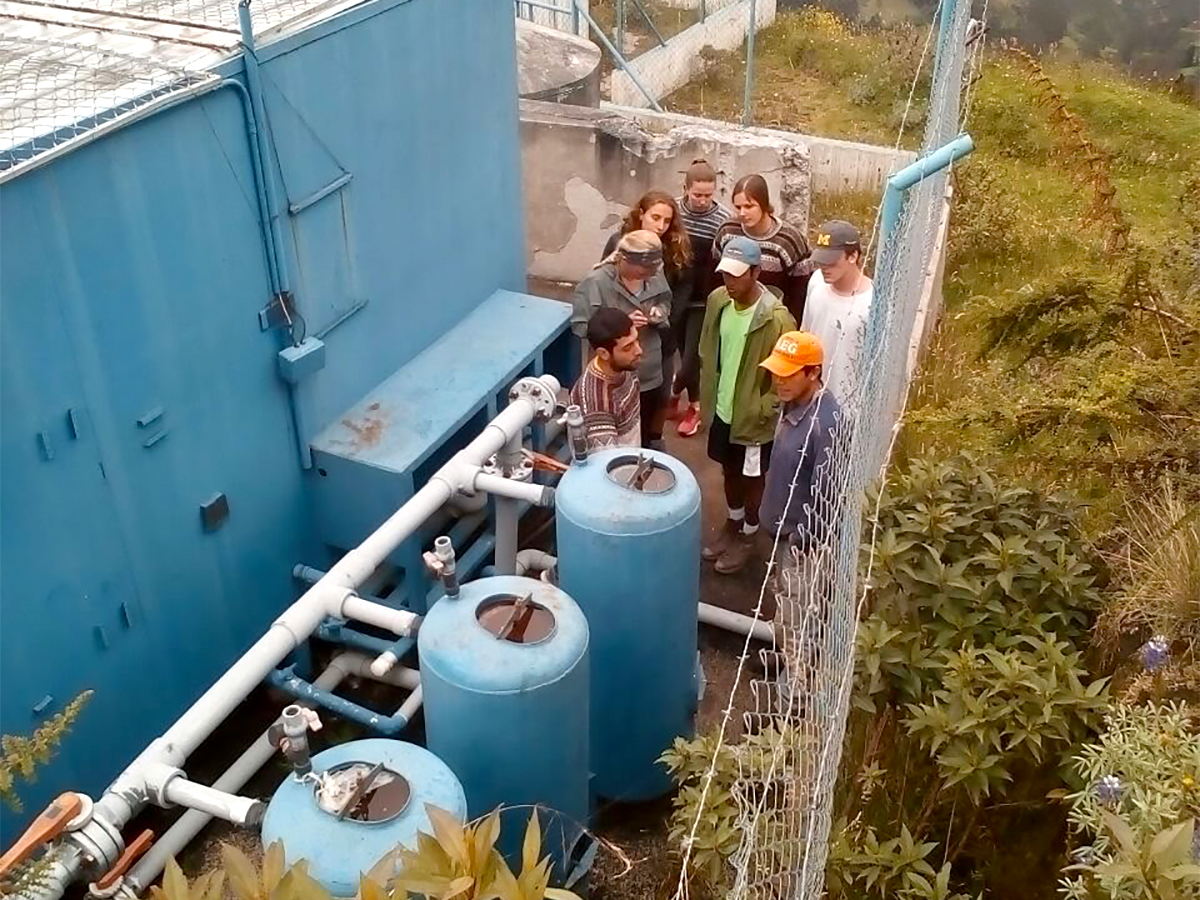 “I realized over the course of our first year that the best organizations that do this sort of work don’t go in with a ready-made solution,” says Ojeda, bottom left, with an Olmedo resident and other members of the Aquador team. “They go in to empower people.”

The needs-assessment trip showed Team Aquador that Ecuador’s water requirements were as diverse and numerous as the communities they visited. If they hoped to make a lasting difference, Ojeda realized they were going to have to focus on one community and learn how to work alongside them. Ultimately, the team chose Olmedo, a small municipality in the south of Ecuador where water storage has become a serious safety concern.

In much of Olmedo, houses are clustered together in groups of three or four wherever the rough terrain allows. As a result, home plumbing is a rarity, with water instead collected from a local river and waterfall in a large cement cistern, from which residents gather enough for their needs in rust-prone metal drums. While drinking water is usually boiled to ensure its safety, this is often not done for cooking or cleaning, leaving people at risk to waterborne pathogens. This is particularly dangerous for children, whose immune systems are not fully developed. To further complicate matters, much of the water throughout Ecuador is classified as hard, laden with metals and minerals that present their own health risks.

To better understand and address the specific issues faced by the people of Olmedo, Team Aquador returned to Ecuador this summer to conduct detailed water testing, as well as to meet with members of the local community. Having partnered with local architect and founder of Fondo de Arquitectura David Regalado, Team Aquador planned a town-hall meeting and both a radio and a televised interview to publicize their project to as many people as possible. They also worked with local mayor Klever Sanchez’s office to interview people about their needs and the challenges they face. With that information gathered, they aim to return to Michigan to develop the water-filtration system that will work best for the community.

“We want to really understand the issues they have around potable water and how they can best be remedied,” Ojeda says. “The people we’re working with aren’t ignorant—it’s just that nobody has shared the data with them before. They want that knowledge, to know what’s best for their families and communities, and we can give them that.”

Ojeda is a recipient of a Rackham Merit Fellowship. In his effort to become a better leader for Team Aquador, he has also attended multiple Rackham professional-development workshops on topics including team communication, conflict resolution, and professional writing.