Rackham alumna and U-M Professor Ruth Zielinski promotes the benefits of midwifery and nursing in Michigan’s top-rated program and around the world. 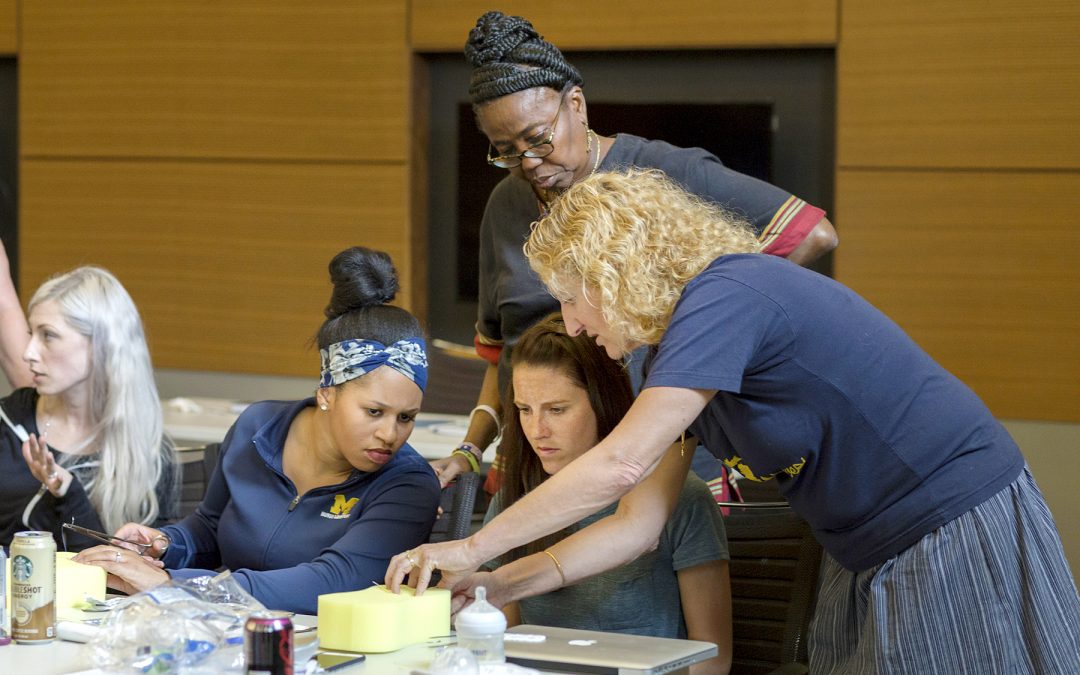 “I saw my first baby being born when I was eight, and I knew then that I wanted to be a midwife,” says Ruth Zielinski (Ph.D. ’09). “They hired me for 25 cents an hour to wash the babies. I loved it.”

Zielinski’s childhood experience in a mission hospital in the United Arab Emirates (then called the Trucial States), where her father was working as a minister, fueled her early passion for midwifery. She spent a lot of time at the hospital, helping out by putting pills in envelopes and washing babies.

As she tells it, Zielinski’s inchoate dreams of becoming a doctor would have a somewhat “lackluster start.” After an unhappy stint as a pre-med student, Zielinski switched to nursing. She went on to earn her R.N.-B.S.N. degree and completed her master’s in midwifery several years later at the University of Michigan.

Zielinski returned to U-M for a Ph.D. in nursing in 2005 as a non-traditional student. Finding herself back in school in her early 40s had benefits and drawbacks.

“I came with a ton of clinical experience and depth of understanding about women’s issues,” Zielinski explains. “But I also had to juggle the responsibilities of adult life and commuting from Kalamazoo.”

She remembers a time in her first year of the program, sitting in a sociology seminar taught by a professor who believed that nurses “just gave shots to people,” feeling deeply that she didn’t belong in graduate school. Reflecting on this experience years later, Zielinski comments poignantly, “I bet a lot of Ph.D. students have that feeling of not belonging.”

Zielinski’s graduate experience was unconventional in other respects. She entered the program openly proclaiming that she wanted to learn in order to advance her teaching and clinical practice, rather than to conduct research.

“They let me in anyway,” Zielinski says. “Even though I said I wasn’t that interested in research, my advisors could see the bigger picture.”

Zielinski’s dissertation research was driven by questions about the relationship between female body image and genital shame, formed from a decade of clinical practice. Her enthusiasm propelled her project forward, even though her advisors warned her that it would receive little to no funding. Her drive and willingness to take risks have been amply rewarded—Zielinski’s dissertation, Private Places—Private Shame: Women’s Genital Body Image and Sexual Health, received the ProQuest Distinguished Dissertation Award. It surveyed a broad demographic of women in order to create a valid and reliable instrument to measure genital body image, and her research today is seen as paramount in the field.

Zielinski complemented her Ph.D. with a certificate in women’s studies, which allowed her to take an interdisciplinary approach to her research.

“It took me out of the School of Nursing and into other disciplines where I could hear different voices and perspectives,” she says.

Her experiences exemplify the advice she gives to current graduate students: “Take advantage of what’s here, and enjoy yourself along the way.” At the same time, Zielinski admits, it’s OK to feel like earning your graduate degree is difficult.

“This is really hard,” she remembers often thinking while writing her thesis. “But what was I expecting? How frightening if it wasn’t hard!”

Questions Zielinski wrestled with in her dissertation on genital body image remain central to her work in nursing. Currently a U-M clinical associate professor and director of the nurse midwife program, the No. 1 such program according to U.S. News and World Report, Zielinski has worked hard to build a strong immersion program for U-M midwifery in Ghana and Uganda—countries in which modern family planning remains suspect, but nonetheless, among the women, there is still a strong desire to learn about it.

During the immersion trips, Zielinski and the students work in clinics and the labor ward. Central to her global work is education related to safe motherhood in communities as well as midwifery and nursing programs in the South Sudan, Myanmar, Kurdistan, Haiti, Mongolia, and Liberia. 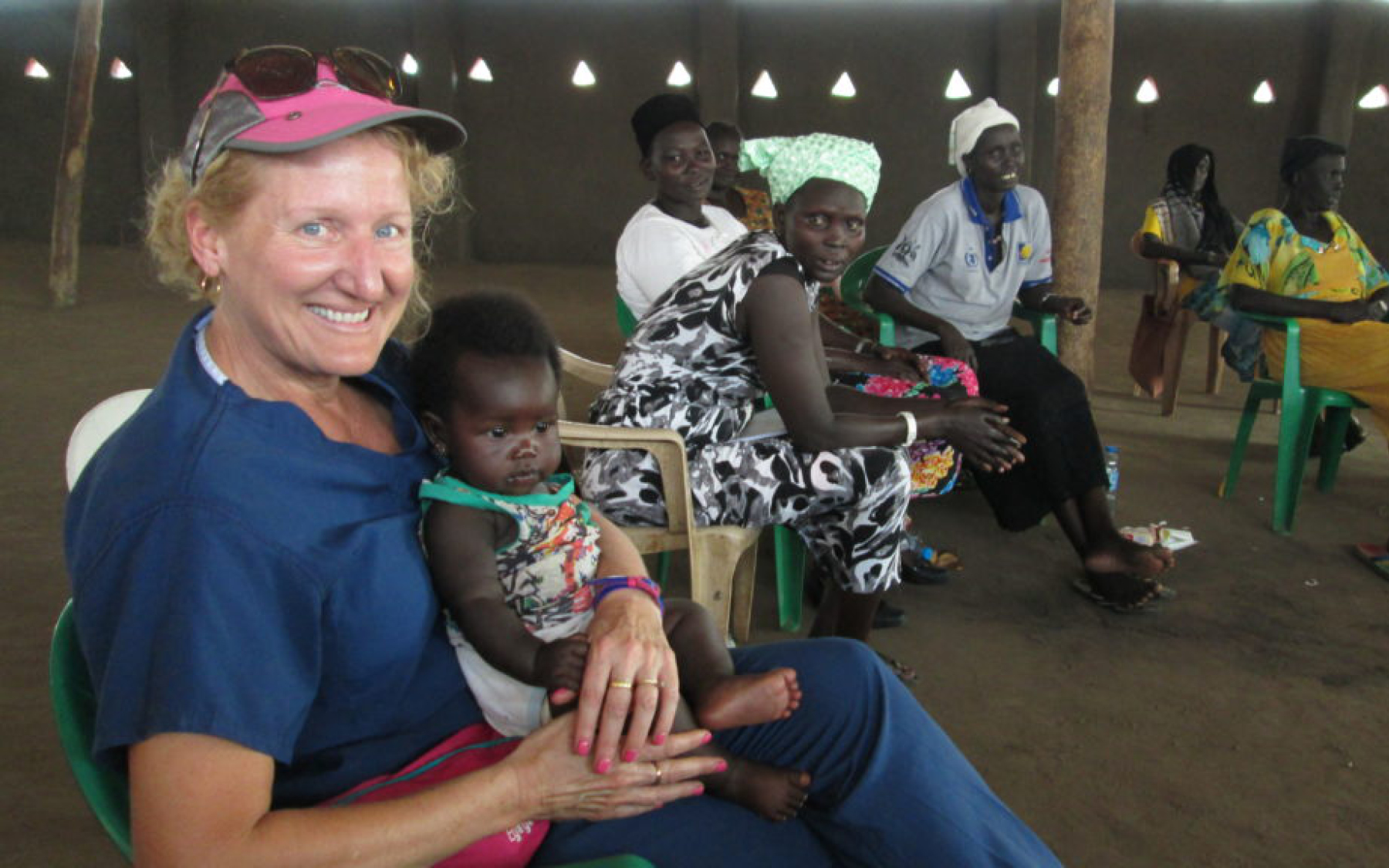 Zielinski holds a baby whose mother is taking Zielinski’s class on family and child health in a Ugandan refugee camp.

“We never do anything there that we do not do here,” Zielinski makes clear. “We always remember that we are guests in that country.”

There are also cultural customs to consider. “I’ve made mistakes,” Zielinski says. She goes on to explain a time when one of the in-country midwives was upset because the U-M students were being “too nice” to the patients. In this midwife’s mind, nurses and midwives should encourage the patients to be strong and tough.

“It really made me think about how, without compromising our beliefs and values, we could help create a more positive childbirth experience for women,” Zielinski remembers.

Although her triumphs are numerous, Zielinski is not one to ruminate over her accomplishments.

“There is so much that needs to be done with strengthening midwifery and nursing education—and also promoting the professions,” Zielinski says.

Within the oft physician-centric climate of Western medicine, midwifery, according to Zielinski, sits on the bottom rung the de facto hierarchy of medical professions.

“I have an obligation as a woman and as a nurse, midwife, and faculty member at U-M to challenge the system,” Zielinski says. “I use my credentials and education—and place of occupation—because I want there to be more respect for nursing and midwifery. It’s about respect and pride in these professions.”