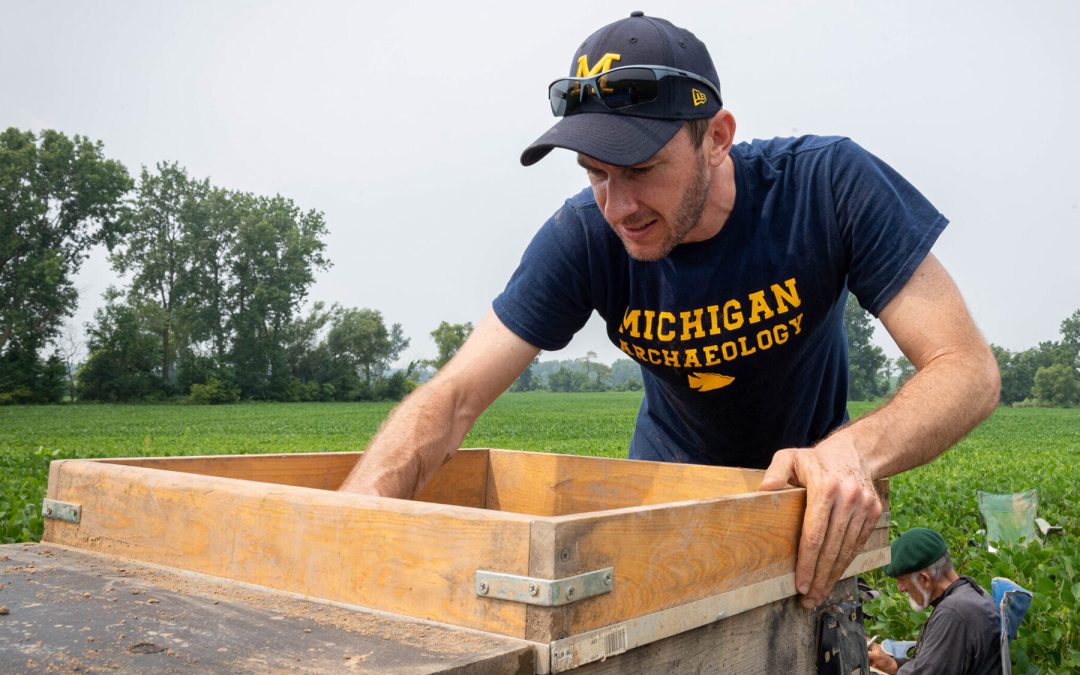 The story of human activity in what would become the State of Michigan was pushed back in time to 13,000 years ago, thanks to new research from Brendan Nash, a Ph.D. candidate in the U-M Department of Anthropology, alongside independent researcher Thomas Talbot and Henry T. Wright, a U-M professor of anthropology and curator of Near Eastern Archaeology at the U-M Museum of Anthropological Archaeology.

Talbot, a self-taught researcher affiliated with the St. Joseph County Historical Society, found a spear point from the Clovis culture—a Paleoindian culture that existed in the Americas between 13,000 and 12,500 years ago and from which most modern Native Americans can trace their ancestry—in a St. Joseph County farm field early in the spring of 2008. He continued to walk the site, now called the Belson Site, after the family of farmers who own the land, every spring since, and found eight more pieces, including a second piece of the original spear point that began his search.

Following a meeting in 2019 at which Talbot showed Wright his collected artifacts, Nash led a U-M archaeological excavation at the Belson Site in the summer of 2020, during which the team discovered not just more tools, but the remains of a campsite that likely marked the temporary home of six or seven Clovis people. It’s now considered the oldest archaeological site in Michigan, and evidence of short-term human habitation at a time when the vast majority of the state lay under a wall of ice up to a mile high and was believed devoid of people by most researchers.

“The peopling process of the Great Lakes was always thought to have been later, and that the Great Lakes was really just the northernmost region of a bunch of other groups’ ranges,” Nash says. “Michigan culture history has always been thought to be piecemeal of other place’s culture histories that happen to be coming into and out of Michigan periodically. Now what we’re seeing is that we’ve got a presence that is as early as other sites in North America, and it has the same technology. Now we can not only move Great Lakes culture history back a little bit, but we can also say, ‘Maybe it has its own story that’s not just the butt end of the story of every other region. There might be something really unique about its peopling process.’”

Read the full story at the University Record.