Rackham students recently had the opportunity to talk with alumni and professionals in the film, television, and radio industries. 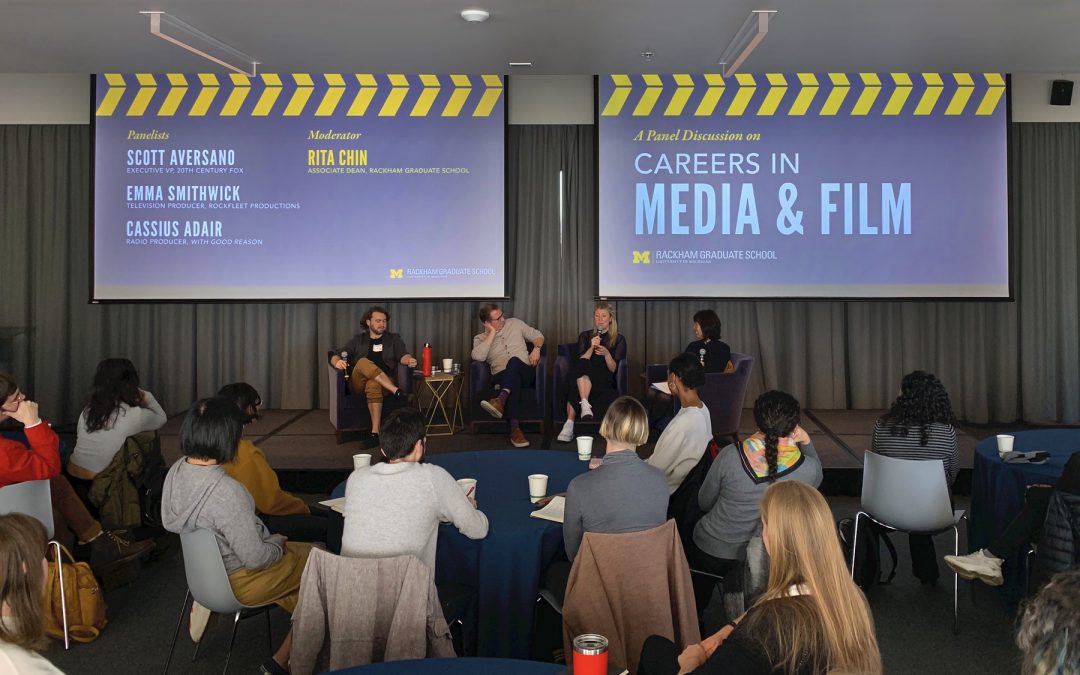 On October 18, Rackham hosted alumni and media professionals for a panel discussion on career opportunities in the film, television, and radio industries.

Moderated by Rita Chin, Rackham’s associate dean for social sciences and a professor in the U-M Department of History, the panel included Cassius Adair (Ph.D. ’17), a producer for the public-radio show With Good Reason and 2018 Association of Independents in Radio New Voices Scholar; Scott Aversano (M.A. 1992), the executive vice president for production at 20th Century Fox, and Emma Smithwick, a six-year BBC veteran and the founder of the comedy and drama production company Rockfleet Productions. The formal event was followed by a more informal networking lunch with the panelists.

“We organized this panel in an effort to support Rackham’s new vision for graduate education, which aims – among other things – to broaden the professional horizons and career possibilities for graduate students,” Chin says. “Our goal is to give students concrete ideas of sectors beyond academia where their intellectual expertise is valued. Ultimately, we want to help students harness their world-class graduate education for broad social impact, as well as to achieve their career aspirations in a wide variety of fields.”

During the event, panelists emphasized the importance of transferable skills for graduate students interested in pursuing a career outside academia. The research, writing, editing, critical thinking, and narrative construction skills students acquire through graduate studies are key capabilities in many industries, including film and other media.

Ani Bezirdzhyan is a doctoral student in the English language and literature program who has been doing video editing and production work since high school. Given the challenges of finding a tenure-track position and her longstanding interest in the industry, she immediately registered for the panel discussion.

“I think the discussion of transferable skills was the most interesting part of the panel,” Bezirdzhyan says. “It meant that it wasn’t just the skills I’d acquired before coming to grad school that would count in the industry, but also the ones I’ve cultivated here. It was uplifting to think about the way our work here can be applied elsewhere. It meant we’re not stuck with only one career path.”

Panelists highlighted the wide range of career options beyond academia available to those with graduate degrees, as well as the diversity of career paths that graduates can take.

Elaine Chen (M.S.W. ’19) chose U-M as an undergraduate because of its strong liberal arts programs. She followed that interest through her graduate studies in social work, during which she also completed a certificate program in world performance studies. That led, in part, to her current position with the U-M Prison Creative Arts Project (PCAP). As she begins applying to Ph.D. programs while continuing her work with PCAP, Chen says the panel’s focus on creative professions formed a direct tie with her own interests and left her with new perspectives to consider.

“Hearing the stories of the panelists showed that there’s more than one way to find success through grad school,” Chen says. “When you’re in school, it’s easy to put yourself in a box based on what you’re studying, but the panelists were proof that careers aren’t always a straight line. They found opportunities to do the creative work they loved while using the skills they learned here.

“Seeing how people flipped their script, using their skills and training from grad school to chart their own path, was a huge moment of validation for me,” Chen continues. “Because the day-to-day life of a grad student so often revolves around immediate goals—completing this project or that assignment—it helped to remind myself that I’m learning the skills to help me do what I love.”