For decades, the Standard Model of physics outlined four fundamental forces underlying every physical phenomenon. Now, nationwide research including Rackham students and alumni may change the way we understand our universe. 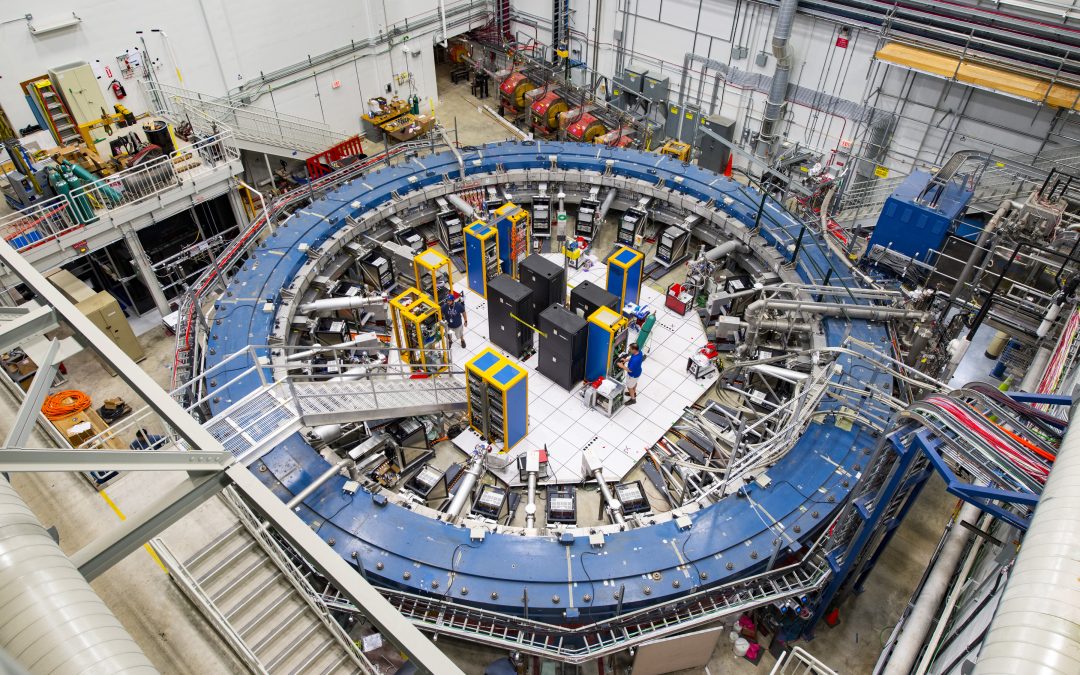 Gravity. Electromagnetism. Strong nuclear. Weak nuclear. Together, these four forces underpin nearly every interaction in the physical universe, from the orbits of galaxies to the collisions of subatomic particles.

These forces play a key role in the Standard Model, the most comprehensive and reliable theory used by physicists to describe the structure and operation of the universe since the 1970s. But while its consistency and scope have allowed researchers to predict and analyze a wide range of phenomena, the Standard Model has left its share of mysteries yet to be understood. Some, like the tricky relationship between gravity and the other fundamental forces, have been known since the model was first conceptualized. Others have emerged more recently as our ability to study the universe has improved, and they raise a remarkable possibility: There may be more forces than we currently know.

One of the key features of the Standard Model is its classification and description of the behavior of all known elementary particles, those smaller than an atom that cannot be broken down into yet smaller particles. One such particle, the muon, has the same negative electrical charge and spin of the more widely known electron, but its mass is significantly greater.

Twenty years ago, researchers at the Brookhaven National Laboratory, a U.S. Department of Energy (DOE) lab in Upton, New York, conducted an experiment called Muon g-2. This was an effort to measure the strength and orientation of the magnetic field created by muons, also called the g-factor, and compare it against the predictions of the Standard Model as a way of both learning more about subatomic particles and as a test of the theoretical framework’s limits. The Standard Model had repeatedly been shown to accurately predict the g-factor of the electron, and the similar muon was seen as the next step.

The researchers found the observable g-factor of muons varied significantly from the Standard Model’s predictions, a first hint that there may be another force at work beyond the known fundamental forces, but their findings were not yet precise enough to tell for sure. That task would fall to a new nationwide team of over 200 scientists operating under another DOE facility, the Fermi National Accelerator Laboratory, or Fermilab, in Batavia, Illinois, with the goal of measuring the magnetic field of muons to within 100 parts per billion. This team included Alec Tewsley-Booth and Midhat Farooq, then Ph.D. students in the U-M Department of Physics, as well as current U-M physics Ph.D. students Eva Krägeloh and David Aguillard.

“The Standard Model states there are 17 fundamental particles, and all of them interact with the muon,” says Tewsley-Booth, now a postdoctoral research fellow at Fermilab. “That means measuring the magnetic moment of the muon can be an indirect measurement of all of them.”

In 2018, the team began collecting data, and the second hunt for the fifth force began. 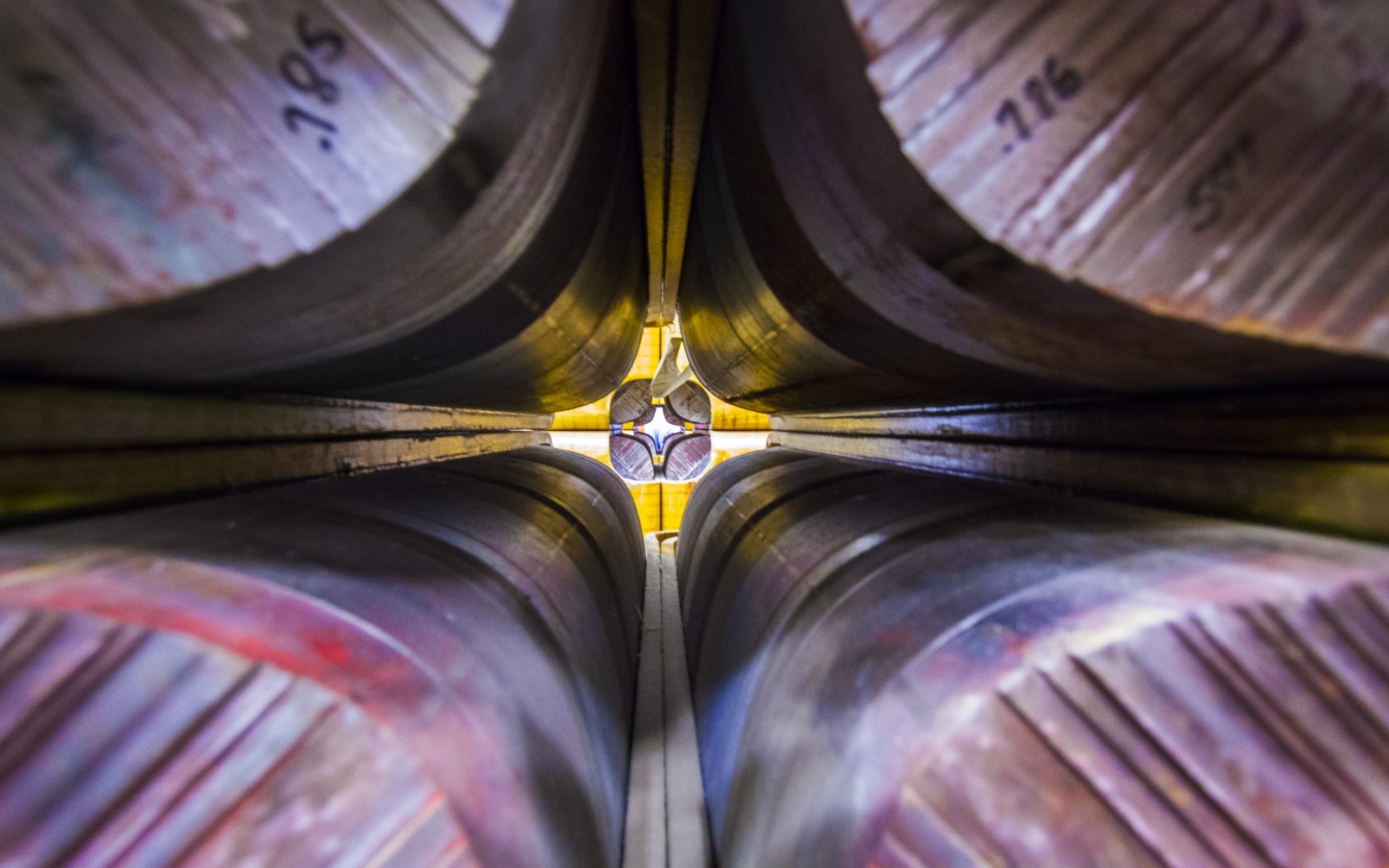 A quadrupole magnet leading into the muon storage ring at Fermilab.

A professor in the U-M Department of Physics from 1934 until his retirement in 1977, H. Richard Crane and his students were instrumental in designing and conducting the first g-2 experiments in the 1950s and ’60s. He and his colleagues were the first to measure the g-factor of the electron, a feat that other physicists at the time believed was impossible and for which he received the National Medal of Science in 1986.

The research conducted by Crane, his students, and his colleagues laid the foundation for the current muon g-2 experiment being conducted at Fermilab nearly 70 years later. Read more about Crane’s life and work at the University of Michigan Faculty History Project.

Thunderstorm in a Bottle

In order to measure their g-factor, the Fermilab team drives muons into a magnetic storage ring, which the particles orbit at nearly the speed of light until they decay, orienting themselves to its magnetic field as they travel. By taking close measurements of the orientation and charge of the particles, as well as the strength and orientation of the magnetic field around them, the team is able to compare their observed results with those the Standard Model predicts. The results of their first run of data collection, reported in April 2021, back up the Brookhaven team’s findings.

While other members of the team studied the behavior of the muons themselves, Tewsley-Booth focused on measuring the strength of the magnetic field at every point along its massive 50-foot circumference. The team does this in two ways, he says. One is by running a device dubbed the ‘trolley’—a metal canister on rails that runs around the magnet every three days to take precise measurements of the magnetic field at 8,000 different points—and the other uses fixed magnetometers just outside the ring that collect data continuously from 72 points.

“The trolley is dense in space, but sparse in time, while the probes are dense in time but sparse in space,” Tewsley-Booth explains. “My role was to develop a way to use these fixed probes to figure out what was happening between trolley runs. That was a place the Brookhaven experiment had some issues, and one where we could improve our accuracy over that earlier attempt.” 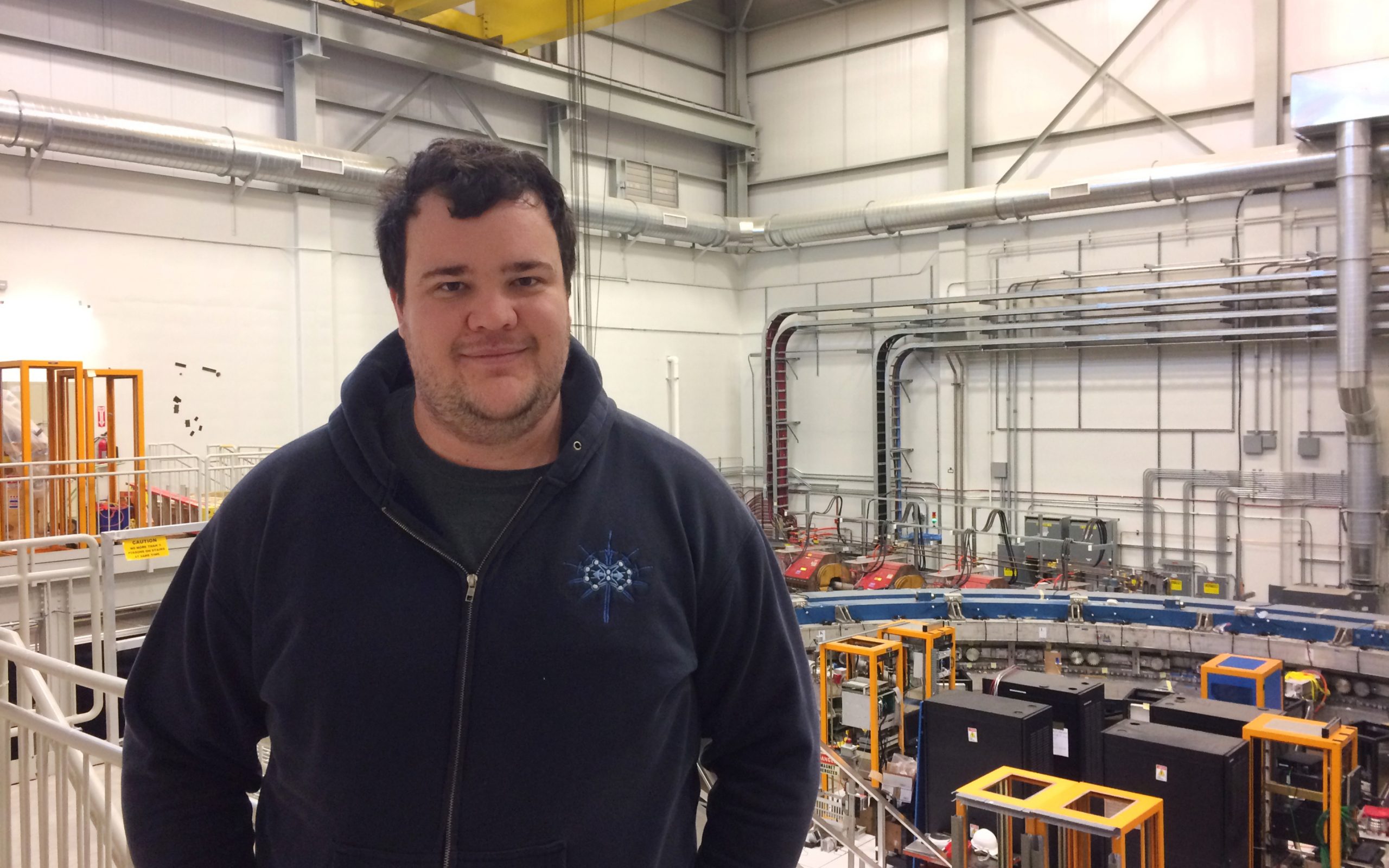 Tewsley-Booth stands overlooking the muon storage ring, the same ring used in the earlier Brookhaven experiment and donated to the Muon g-2 project.

Among other changes Tewsley-Booth implemented in order to extract all possible information from the probes, he determined how to use them to track differences in the magnetic field of the muon beam over time, correcting an error of 20-30 parts per billion.

In order to reach the needed accuracy, however, the measurements must go through a series of cross-checking processes. That’s where Farooq’s expertise came in.

Farooq developed and operated a device consisting of helium-3 gas in a glass cell surrounded by high-energy coils. These coils excite the gas particles to such high energies that they emit photons and the gas glows purple.

“You create this thunderstorm in a glass cell, essentially, and then shine an invisible infrared laser into it,” Farooq says. “That gets the helium-3 nuclei in the right energy state to align better with the magnetic field.” 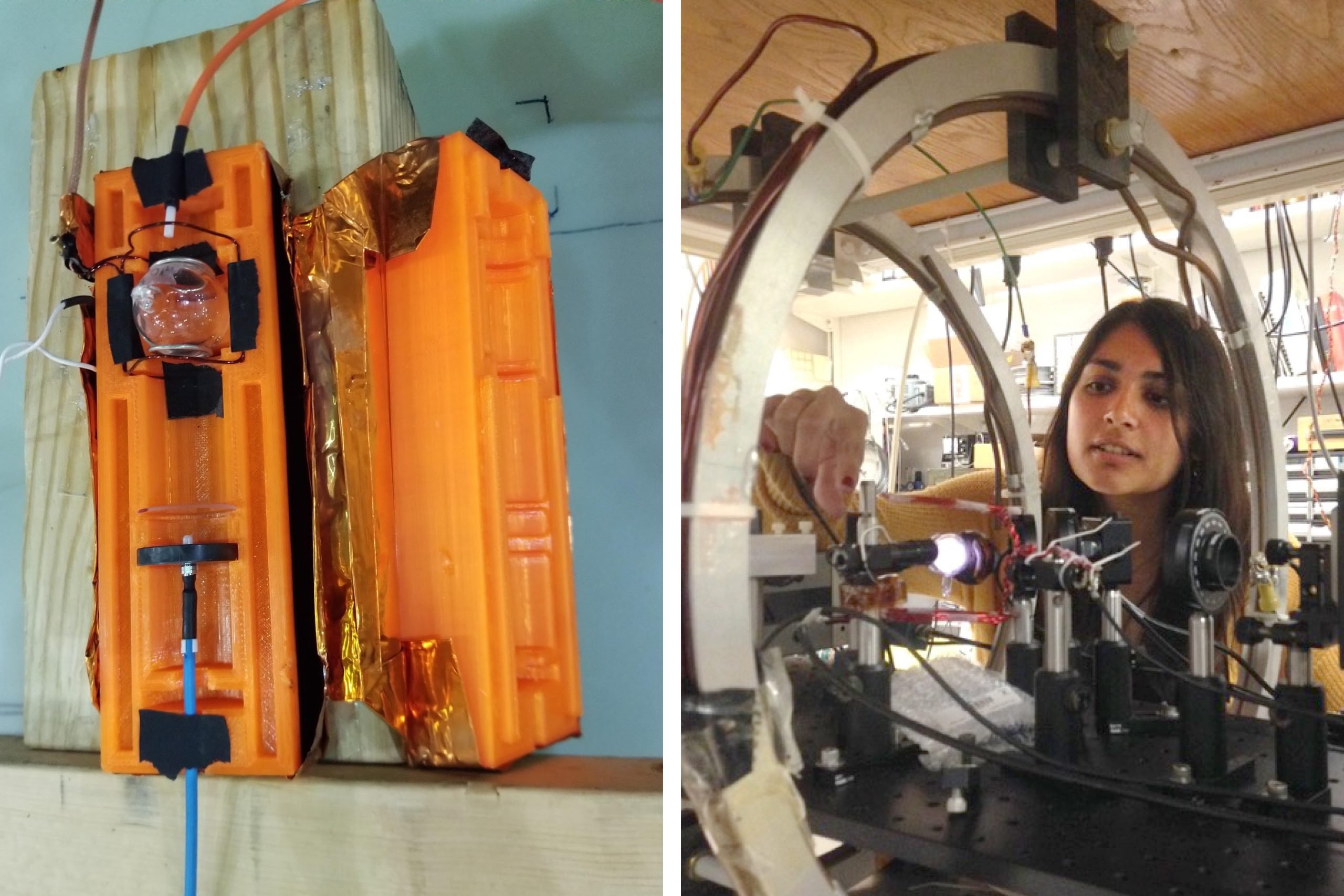 Farooq (right) works on her helium-3 NMR device (left). When the helium-3 gas in the glass cell reaches the right energy level, it glows purple.

Krägeloh and Aguillard, meanwhile, worked on comparing the magnetic field data in order to help understand the accuracy and uncertainties involved in all of the team’s data collection methods.

The end result was an experience that enriched the understanding of the entire team.

“Working on a collaboration project is a great experience for a graduate student,” Farooq says. “You get to work with experts, build a lot of skills, and get experience giving scientific talks and answering tough questions from your peers. That’s important as a scientist and in life. Because of my experience on this project, by the time I did my defense I was a lot more confident in my work.”

While they worked on their own aspects of the experiment, the contributions of each student added up to a whole that illuminated not just their own knowledge, but to an important contribution to their field.

“This is one of the most interesting and potentially high impact physics results in recent years, and being a very significant part of the experiment, collaboration, and analysis has been a very exciting experience for Midhat, Alec, Eva, and David,” says Timothy Chupp, a professor in the U-M Department of Physics and faculty advisor for the students. “More importantly, their contributions have been pioneering and absolutely crucial to producing the recently announced result and the ongoing data collection and analysis that we expect to strengthen the evidence that muons behave in ways that our Standard Model does not get right. Rackham support for their research and to attend meetings to present their work have enabled and enriched this effort for each of them.”

While more data collection runs will continue in the coming years, the first results point to a new frontier for the field of physics and our understanding of the forces that shape the universe we call home.

“This is, in my opinion, the coolest thing that people can do,” Tewsley-Booth says. “Of all the laws of nature, these are the most fundamental; everything else we see is an emergent property of these. These particles and forces are the smallest building blocks of the universe, and the fact that we can see them and study them, it’s almost like art. It’s something interesting we can do that lies beyond us.”

Tewsley-Booth is the recipient of two Rackham Conference Travel Grants. In addition, he participated in numerous professional development workshops, particularly those that focused on improving his teaching skills.

“I really enjoy teaching, and the teaching opportunities at Michigan have been great,” he says.

Farooq is the recipient of a Rackham Merit Fellowship, which let her focus on her classes and research. She also received Rackham Conference Travel Grants, which allowed her to attend meetings of the APS and other particle physics conferences.

“I loved my time at Michigan,” she says. “The extra resources Rackham made available for conferences was wonderful, especially given how much traveling was involved in working on this project.”

This work was supported by the following agencies: Brookhaven National Laboratory and the Fermi National Accelerator Laboratory with an NSF grant agreement by grant #1812314, #1828512, #2110988.