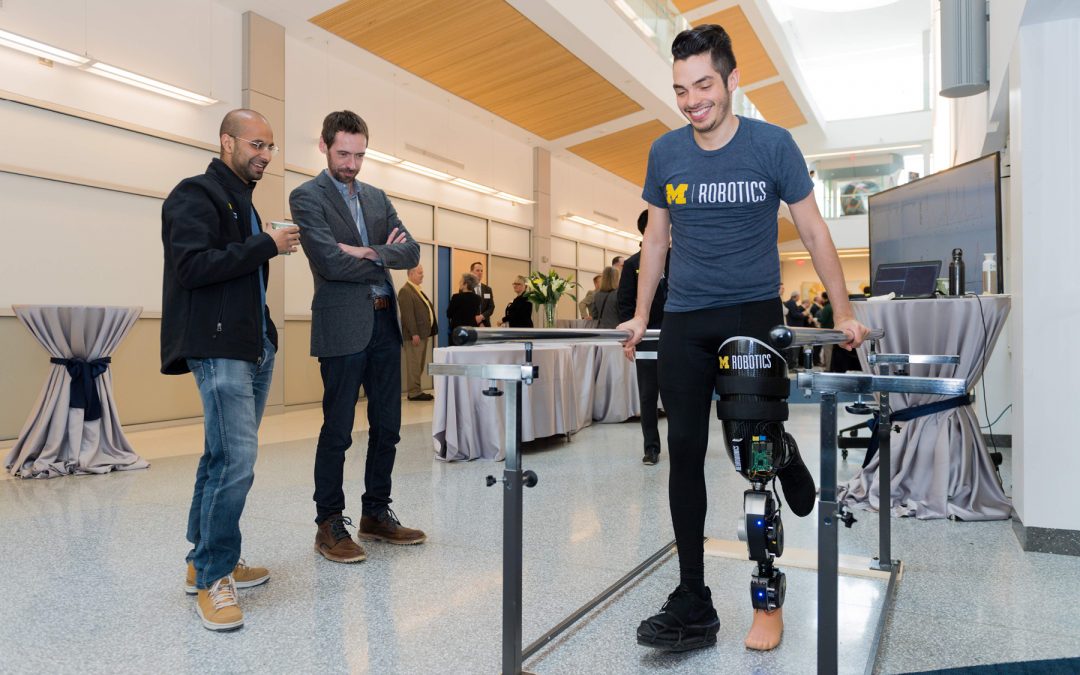 On June 12, 2014, Juliano Pinto took the field at Corinthians Arena in São Paulo, Brazil, before an audience of tens of thousands in the stadium and millions more on television and streaming channels worldwide. It was the opening ceremony of the FIFA World Cup, and Pinto had been selected to perform the opening kick, officially beginning the most-watched sporting event in the world. The kick itself only pushed the ball a few feet, but even that was incredible given the circumstances—the 29-year-old Pinto was paralyzed from the waist down.

To make the kick possible, Pinto donned a robotic exoskeleton developed by the Walk Again Project, a team of over 150 scientists from universities and organizations around the world. While exoskeleton technology was nothing new, what made Pinto’s opening kick unique was how he did it. Most exoskeletons are operated with buttons and other controls, but Pinto’s was hands-free, using a device called an electroencephalogram to control it solely through the wearer’s own brain waves. It was a revolutionary display of technology, and one that did not escape the notice of a young aerospace engineer watching from halfway around the world.

We Have the Technology

As Alejandro Azocar neared the end of his undergraduate studies in aerospace engineering, he found himself facing a career crisis.

“I really enjoyed my work, but I felt disconnected from the world because I wasn’t making a direct impact on people,” Azocar says. “As soon as I saw that opening kick at the World Cup, I decided I wanted to build robots to help people walk again.”

Azocar immediately shifted his academic focus in this new direction, earning his master’s degree in biomedical engineering at Northwestern University before following his advisor, Elliott Rouse, from Northwestern to pursue his Ph.D. in the Department of Mechanical Engineering at U-M.

At U-M, Azocar leads the Open-Source Leg (OSL) project in the Neurobionics Lab, where he designed the ankle joint and control systems for a bionic leg prosthesis.

Millions of people in the United States live with the aftermath of lower-limb amputations, most of whom utilize traditional prosthetic legs to help them get around. These prosthetics come with a number of complications for their users, however—they often cause their users to move slower, tire faster, and become more prone to falling, particularly when navigating stairs or uneven terrain. Furthermore, these issues often lead to the development of coping mechanisms, like leaning more heavily on the other leg, which can alter their gait and damage other joints by putting additional strain on them.

Where traditional prostheses behave like springs and require extra effort from the user, Azocar’s bionic leg utilizes high-torque rotor motors originally developed for use in drones that are capable of simulating human muscle power.

“When you lose your leg, you lose some of your muscles, and traditional prostheses can’t recreate that loss of energy,” Azocar explains. “Our robotic leg uses motors to recreate that muscle energy and help the user walk more comfortably and naturally.”

While the motors provide the energy necessary for movement, they require guidance to properly mimic the way the human body engages them. A complex array of sensors can determine the location of the leg in three-dimensional space, as well as the position and speed of the knee and ankle. When integrated with artificial intelligence software, the control system of the OSL interprets what the user is trying to do—whether walking up stairs or across a level surface, for example—and sends power to the motors to match the activity.

Developing control systems capable of this level of complexity begins with studying how the human body walks under a variety of circumstances, then recreating that behavior in a computer model. Azocar and his team then begin an iterative process of building and testing the controls and physical components—the motors and transmission systems—that provide the right balance of performance, weight, and size.

“We create control systems that replicate the motions and effort of the ankle and knee during healthy human walking,” Azocar explains. “We want the smallest, lightest leg we can make without sacrificing performance, and we also want it to look appealing to the person wearing it. It’s a fine line, but we’re trying to mimic what the human body does so the user can walk like they normally would, and the software does the rest.”

The Journey of a Thousand Miles

The OSL team’s work is far from the world’s first foray into applying robotic technology to prosthetic legs. What sets it apart, however, is the open-source approach that gives their project its name.

While many groups have spent years, as well as significant money and resources, developing and building robotic legs, they all used different software and control systems to do so. This makes the performance of the end products difficult to compare, as it is not immediately clear whether hardware, software, or both account for any differences between devices. By making their leg open-source, Azocar and the OSL team hope to provide a standard robotic hardware for the field that will reduce the costs of development and enable better, more comparative studies.

Azocar also envisions taking the team’s leg on a longer journey. Where the majority of bionic leg projects end with a couple experiments and the publication of their results, the OSL team wants to see their work translated into real-world applications.

“We want to use our leg for multiple studies over the long term,” Azocar says. “We want it to be more than a one-hit wonder; we want more people to have access to it, and we want to see it in hospitals and homes, helping people regain their mobility.”

Their work is on its way there now. The leg is already being used at the Shirley Ryan AbilityLab, the top rehabilitation hospital in the United States; the team is on track to deliver two legs to research teams by the end of this summer, and they have begun talks with four more universities around the world looking to use the leg. More and more people are learning about the OSL, thanks in part to it being featured in a special exhibit at the Museum of Science and Industry in Chicago, at the Amazon re:MARS conference, and in a new television series called Crash Test World.

While the team’s continued scientific success is exciting, the real value for Azocar is seeing the impact their work has already had on people.

“Recently someone came in to help us test the leg,” Azocar says. “After using it for a little while, she wanted to take it home and keep using it. Seeing somebody wearing and walking on something that you helped build, and their reaction to it, I realized this could really help people, that it could change lives.”

Azocar recently received the Rackham Predoctoral Fellowship, which provides financial support and benefits for three academic terms to students working on dissertations that are unusually creative, ambitious, and impactful. He is also a recipient of the Rackham Conference Travel Grant, enabling him to attend conferences in Europe, where he presented research papers and conducted demonstrations of the hardware developed by the OSL team. He attended the Design Your Life workshop, hosted by Rackham, which helped him determine what he wanted out of his doctoral program and the steps he needed to take to get there.