While public-health officials work arduously to stem AmericaÛªs growing opioid crisis, one Rackham researcher helps investigate how to put opioids to a surprising use. 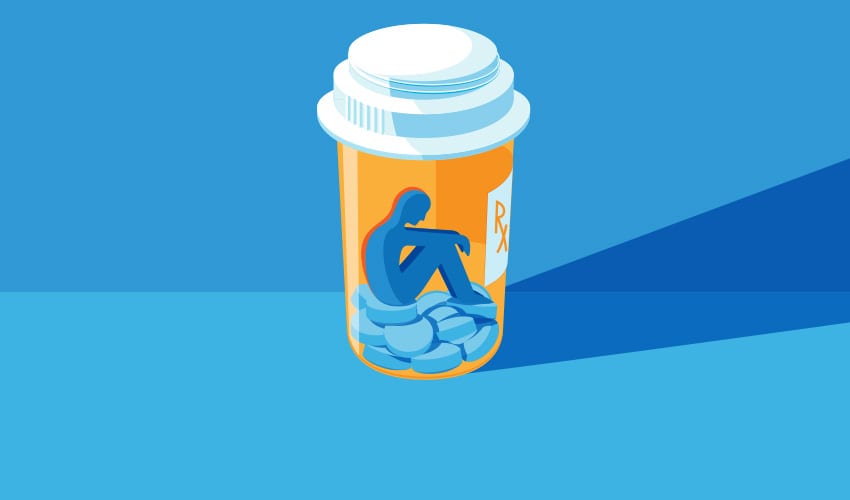 The abuse of opioids in the United States has become a crisis whose consequences are being discussed everywhere from America’s largest public-health organizations to its smallest towns. It’s an epidemic with an emotional and physical toll on millions of lives and a cost in the hundreds of billions of dollars. While some of the more than 90 deaths attributable to opioid overdose each day in this country are due to heroin or such illicit synthetics as fentanyl, the Centers for Disease Control and Prevention estimate that more than half are the result of prescription opioids commonly administered for helping patients cope with chronic pain.

Of course, opioids’ effectiveness in relieving pain has led them to be so widely used—and their accompanying sense of euphoria has led them to be almost as widely abused. But what if there were a way to create an opioid that didn’t have these addictive properties? And what if their clinical application could extend beyond pain management to actively helping people overcome addiction itself? Fourth-year medicinal chemistry Ph.D. candidate Deanna Montgomery explores this very possibility in the lab.

“The thing I like most about my project is that it’s a little counterintuitive,” says Montgomery. “People think of opioids in terms of these news articles, or maybe they know somebody who’s been addicted to an opioid, but it’s actually using the same class of molecules to treat addiction. Cocaine is the main drug that we’re looking at, helping people overcome the physical barriers to breaking that addiction.”

Montgomery explains that opioids are molecules that bind to certain proteins in the brain called opioid receptors, of which there are three types: mu, kappa, and delta. There are opioids produced by the body like endorphins that people popularly associate with the phenomenon known as a “runner’s high,” and there are opioids found in painkillers like morphine, Vicodin, and OxyContin. All of these activate the mu opioid receptors, working to block pain and to elevate levels of the neurotransmitter dopamine, which leads to euphoric side effects.

“Then there are two other types of opioid receptors that have different effects,” Montgomery says. “You can activate or deactivate each receptor to varying degrees, and all of those things are associated with different biological effects.”

Montgomery’s work focuses on developing molecules to help assess those effects. These molecules bind to the kappa and mu opioid receptors for use in a potential treatment for the physiological aspects of cocaine addiction.

“Addiction is really complicated, and it’s psychological, and social, and emotional, and physical,” she says. “Currently, there are behavioral therapies—things like rehab and counseling—which are really important to address some of the factors of addiction. But cocaine use actually causes physical changes to the brain, and that’s what we’re getting at. We’re looking to balance, to find something that can help change the things that have been changed by cocaine back to a normal state, but that won’t then have some of these same addictive properties that a lot of the clinically used opioids do.” 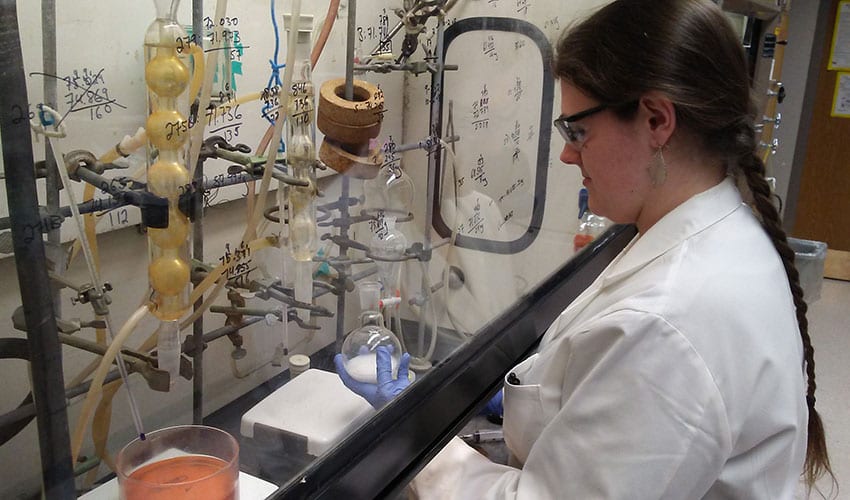 “A lot of people don’t realize that opioids’ current clinical applications already extend beyond pain management,” says Montgomery, pictured here in her lab. “Loperamide is an opioid which is used for gastrointestinal distress, and you may be familiar with its trade name: Immodium!”

Montgomery’s work has showed such promise that earlier this year she was awarded a prestigious predoctoral fellowship by the American Chemical Society (ACS). Aside from a $26,000 stipend and being able to present her work at ACS’s fall 2018 national meeting, the fellowship has afforded Montgomery the chance for some unexpected networking, including an invitation to a Gordon Research Conference.

“It was really a different setting than most professional conferences—smaller and really structured with planned social events and only one set of talks,” she says. “It was a really great experience and a chance to get to know all sorts of people in the field, from professors to industry scientists, as a result of that door being opened.”

In chemistry, a lot of things work a lot better on paper than they do in real life.

Most days, however, find Montgomery behind closed doors in her lab, doing the sometimes tedious work of making molecules in the hope of one day making a discovery.

“In some sense, it’s sort of being a ‘molecular architect,’ where I’m designing, based on the information that we have so far, what I want to build to try and see if it does biologically what we are hoping for. But it’s very rarely one step. In chemistry, a lot of things work a lot better on paper than they do in real life. Sometimes it’s figuring out what I’m making and then figuring out what went wrong and how much of that I can use to find a new route to where I want to get to.”

Ultimately, where Montgomery wants to get to is an FDA-approved medication to help people who are addicted to cocaine. And while she realizes that her thesis isn’t likely to accomplish that, she hopes it will take steps in that direction. Along the way, though, she says she’s likely to have some familiar conversations with people who can find the unexpected nature of her research to be a hard pill to swallow.

“There’s this element of trying to convince people that opioids aren’t just the villains that they’re sometimes made out to be. Yes, we definitely want to be careful, and yes, especially when they’re abused, they have some really bad effects. But they also have really great potential to be used in a variety of areas—not just pain management, but also things like actually treating addiction.”