Rackham architecture student Alaa Algargoosh uses virtual reality technology to recreate historic buildings and better understand the experience of being in them. 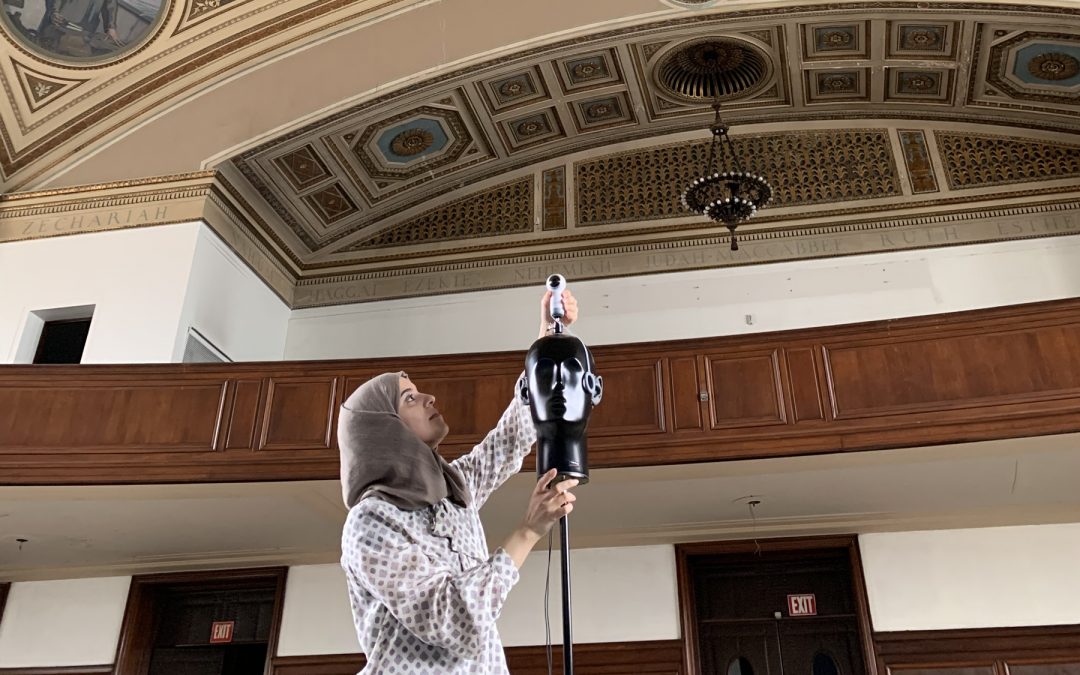 When the sun rose on April 16, 2019, the skyline of Paris had changed. The previous afternoon, a fire began in the attic of the Notre-Dame de Paris cathedral that raged for over 15 hours, consuming much of the roof and collapsing the 160-year-old spire onto the stone vault ceiling below, causing additional damage. And while the largest of them remained undamaged, the bells of Notre Dame, iconic to millions around the world, fell silent.

Thanks to the existence of highly detailed digital blueprints and support from the French government and numerous donors, plans to rebuild Notre-Dame de Paris are already underway. But it could take as long as 20 to 40 years, according to some estimates, to restore the 856-year-old cathedral and allow visitors to experience it as it was in the past. Other buildings of historic, artistic, or spiritual significance cannot count on even that good fortune. In the absence of plans, access to historic materials, and major financial support, many buildings cannot be rebuilt after a major catastrophe, and even if they can, they are rarely restored exactly how they were. The building is changed, and often the experience of being in the building is changed with it.

Long before coming to Ann Arbor, Rackham and Taubman College of Architecture and Urban Planning Ph.D. candidate Alaa Algargoosh was interested in how technology can help us understand the acoustic environment of a building, and therefore enhance the experience and well-being of the people who use it. As a master’s student at the University of Dammam in Saudi Arabia, she developed a cymatic diffuser—a panel that uses advanced technology, sustainable materials, and no energy to reduce sound defects like echoes without diminishing the overall sound energy in a room—for which she was recently named one of the Innovators Under 35 by MIT Technology Review. Now, she’s applying her expertise in aural architecture to understanding—and preserving—the acoustics of important places of worship in Michigan and beyond.

“There’s a lot of research showing how the acoustics of a space impact the experience of listening to a specific performance there,” Algargoosh says. “To preserve that performance, you need to preserve the conditions in which it was experienced. Modern technologies have the potential to let us do that even when the building is changed or even destroyed.” 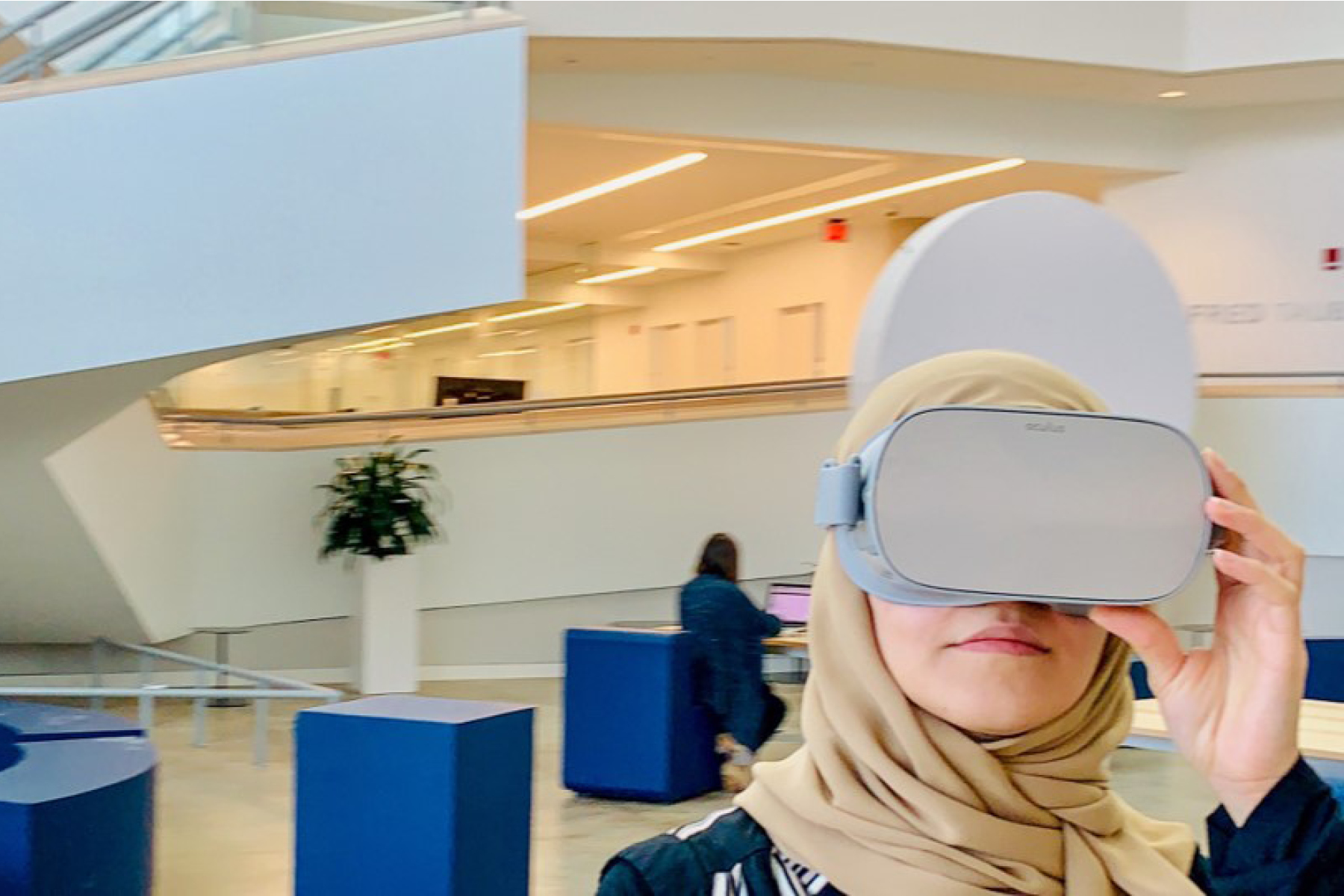 Her interest in the subject is personal as much as it is academic. Algargoosh’s native Saudi Arabia is home to over 94,000 mosques, but she has found very few guidelines for how to design mosques with acoustics in mind. As Islamic worship does not rely on music the way Christian services often do, existing guidelines for churches would not yield the same results. In order to help architects better understand how to design buildings with sound in mind, she decided to recreate them.

Working with Taubman associate professors Mojtaba Navvab and Claire Zimmerman, Algargoosh identified four sites in Detroit and Dearborn—the Islamic Center of America, the Islamic Center of Detroit, Breakers Covenant Church International, and New Bethel Baptist Church—as the focus of her research. She and her collaborator, fellow architecture Ph.D. candidate Babak Soleimani, visited each building, filming their interiors with 360-degree cameras. They used recordings of Islamic recitation and Christian hymns, the focal aural experiences of their respective worship services, in two different formats. First, they used studio recordings from an anechoic chamber—a room without any kind of reflection that allows the pure sound to be captured on its own. Then, they recorded them on-site using binaural technology, which mimics the way sound is received by the human ear to create a more realistic experience.

“In order to evaluate the different acoustical experiences of each building, we had to find the most realistic way to present them,” Algargoosh says. “Virtual reality lets us capture and combine audio and video together in a way that closely simulates actually being there, and that helps us better understand that human experience.”

Combining the audio and video, Algargoosh recreated each building using virtual reality technology. She then invited 20 subjects, a diverse group that crossed gender, race, and religious lines, to view each video, some of which used the studio sound recordings, and others the binaural recordings. The participants were given a set of descriptive keywords, both positive and negative, and were asked to use them to describe their impressions and emotional reactions. The team also collected physiological measurements closely linked to emotional responses, such as skin conductivity, which measures subtle changes in sweating, and heart rate.

While Algargoosh continues to analyze the physiological data, the findings from the subjective portion of the study were recently published. Most participants reported feeling disconnected from or even annoyed by the studio recordings, but the binaural recordings from the worship spaces created a much different experience. Positive, emotional words, like “cheerful” and “happy,” appeared with greater frequency when the subjects listened to the recordings as they would have been heard in real settings.

“The most significant, though, was ‘sacred,’” Algargoosh says. “That word was used much, much more for the binaural recordings, and that shows us clearly that the way the buildings are designed for sound is helping them enhance the emotional impact they were meant to have. Even participants who were not familiar with the particular forms of worship still reported an emotional impact.”

Algargoosh hopes her findings will help her fellow architects design new buildings to enhance the well-being of those who use them, as well as help preserve them for future generations.

“Most of the time when we design buildings, we’re focusing on the visuals, but this draws attention to how acoustics contribute just as much to the way we experience them,” she says. “By capturing the sound signature of a building, we’re finding you can recreate the experience even if it’s been destroyed, like the Notre Dame Cathedral. And you could even apply the same techniques to simulate a building that hasn’t yet been built. This technology can help us understand past, present, and future.”

Algargoosh’s research is supported in part by a Rackham Research Grant, and she has received Rackham Conference Travel Grants that enabled her to attend meetings of the International Congress of Acoustics in Buenos Aires and the International Congress on Sound and Vibration in London, as well as this year’s meeting of the Acoustical Society of America in San Diego. Algargoosh’s studies are supported by the Barbour Scholarship and Dow Sustainability Fellowship. She has also attended multiple Rackham professional development workshops.

“I really enjoy the programs organized by Rackham that bring students from different fields together,” Algargoosh says. “From small workshops where I meet students for one or two hours to fellowships like the Barbour Scholarship that connect us for a full year.”