Rackham student Emily Laub researches the role of facial recognition in wasps—and its impact on co-creating a thriving nest. 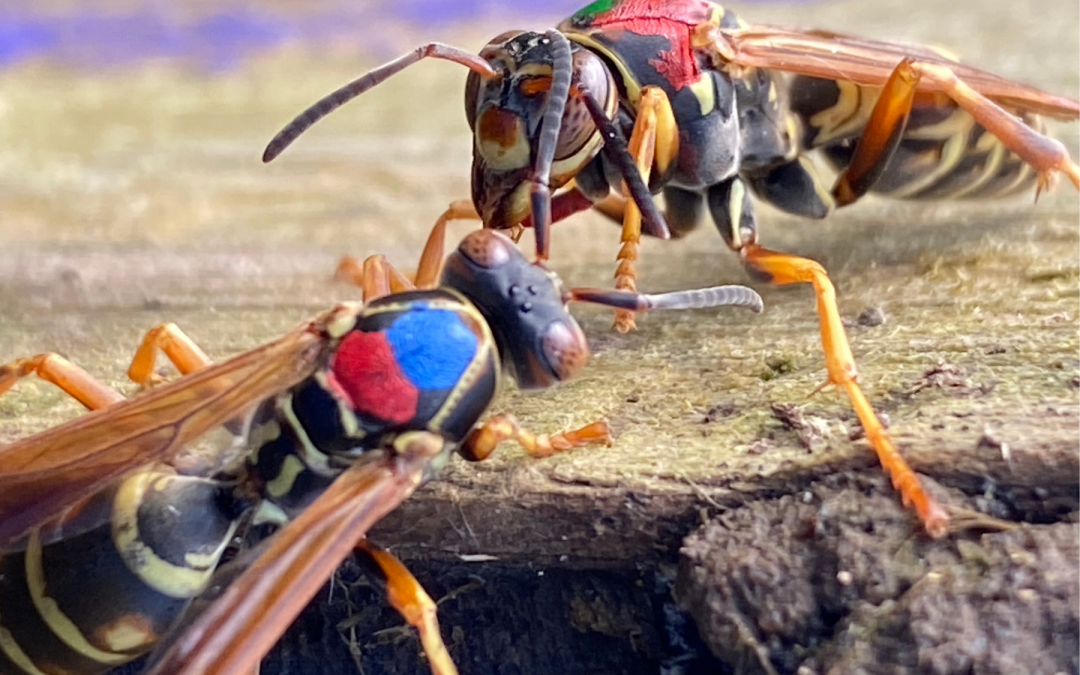 Preliminary research from Rackham student Emily Laub suggests that paper wasps use facial recognition as a key factor in their decision-making process. Emily uses non-toxic model train paint, the red and blue featured on the wasps backs, to help her identify each of her research subjects.

Decisions, Decisions: In the run-up to the 2022 midterm elections, this article is part of a limited series looking at the concept of decision making from the perspectives of Rackham’s four main divisions: the biomedical sciences, the physical sciences and engineering, the social sciences, and the humanities and the arts.

Collaboration is a tricky business, especially when the task at hand is creating healthy, thriving communities. So, why do some groups enjoy fruitful collaborations while other groups fail?

According to Rackham student Emily Laub, the evolutionary answer might have something to do with collaborators’ ability to be recognized by one another as unique individuals.

Like humans, paper wasps collaborate with others who aren’t biologically related to them to accomplish big feats like home building and leadership selection.

Also like humans, paper wasps can recognize each other’s faces.

“Paper wasps use their individual face markings to recognize each other as individuals and recall specific interactions with each other,” Laub says. “Our preliminary work suggests that facial recognition plays a really important role in how successful their nests are.”

A successful nest is large, accommodating as many offspring as possible and abuzz with productivity. A failed nest is much smaller, and its occupant’s behaviors are markedly different.

“A failed nest will just sort of stop growing. Sometimes you’ll see wasps in failing nests that just seem to be hanging out and not actually performing a task that would be useful, like going out to collect wood for nest expansion or sugar to provision offspring,” Laub says. “And eventually, the nest collapses–you’ll go there and nobody’s home.” 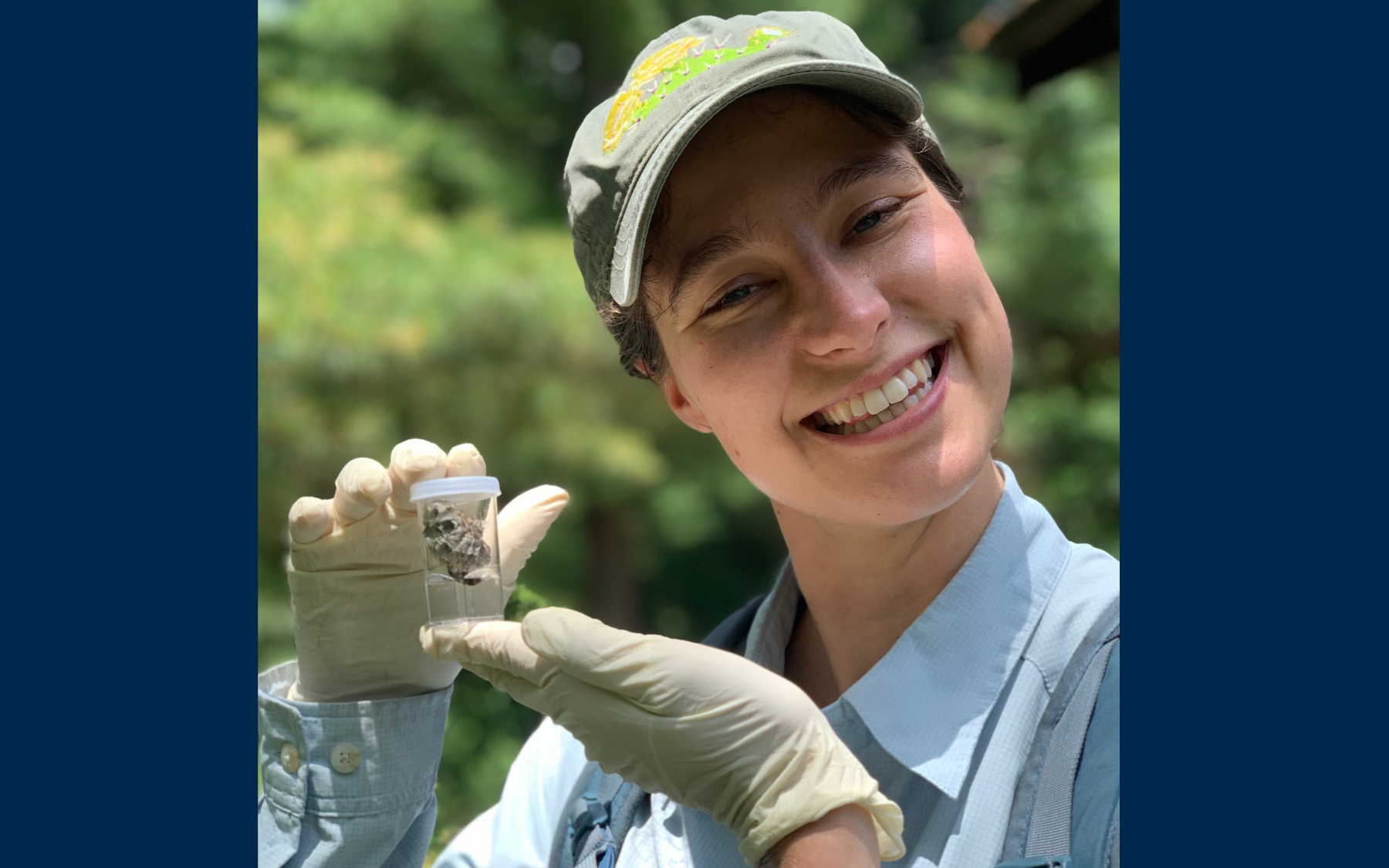 Emily Laub researches the role of facial recognition in wasps—and its impact on co-creating a thriving nest. Here, she takes a break from her fieldwork to smile while holding a vial of her research subjects.

To avoid the pitfalls of a failed nest, female paper wasps need to connect with good collaborators, a process that begins in early May when they wake from their wintertime slumber. They spend anywhere from two weeks to a month “shopping” for other recently awoken females to build a nest with.

“That’s actually quite remarkable because they only live for about one year,” Laub says. “If you’re devoting this much of your behavior to finding the perfect social group, it shows that it probably really matters to your survival.”

While Laub jokes that early spring can be like a “sorority rush” for the wasps, there is no current evidence that particular characteristics will land you a spot in the nest (or not). She’s excited to investigate this aspect of their lives, though.

“I’m curious to know if they are choosing others with physical similarities to their familial lines—or if a counter logic is true. It could be that if all of the wasps look really different, it’s a lot easier to remember who’s who in a collaboration,” she says.

For now, Laub suggests that it’s plausible that wasps are making decisions based on their memory of encounters with specific individuals, with varying degrees of accurate recall.

But the better the wasps are at facial recognition—at seeing each other as individuals—the bigger and more productive their nests appear to become.

“You can use the size of their nest as a physical embodiment of how good their partnership was,” Laub says. 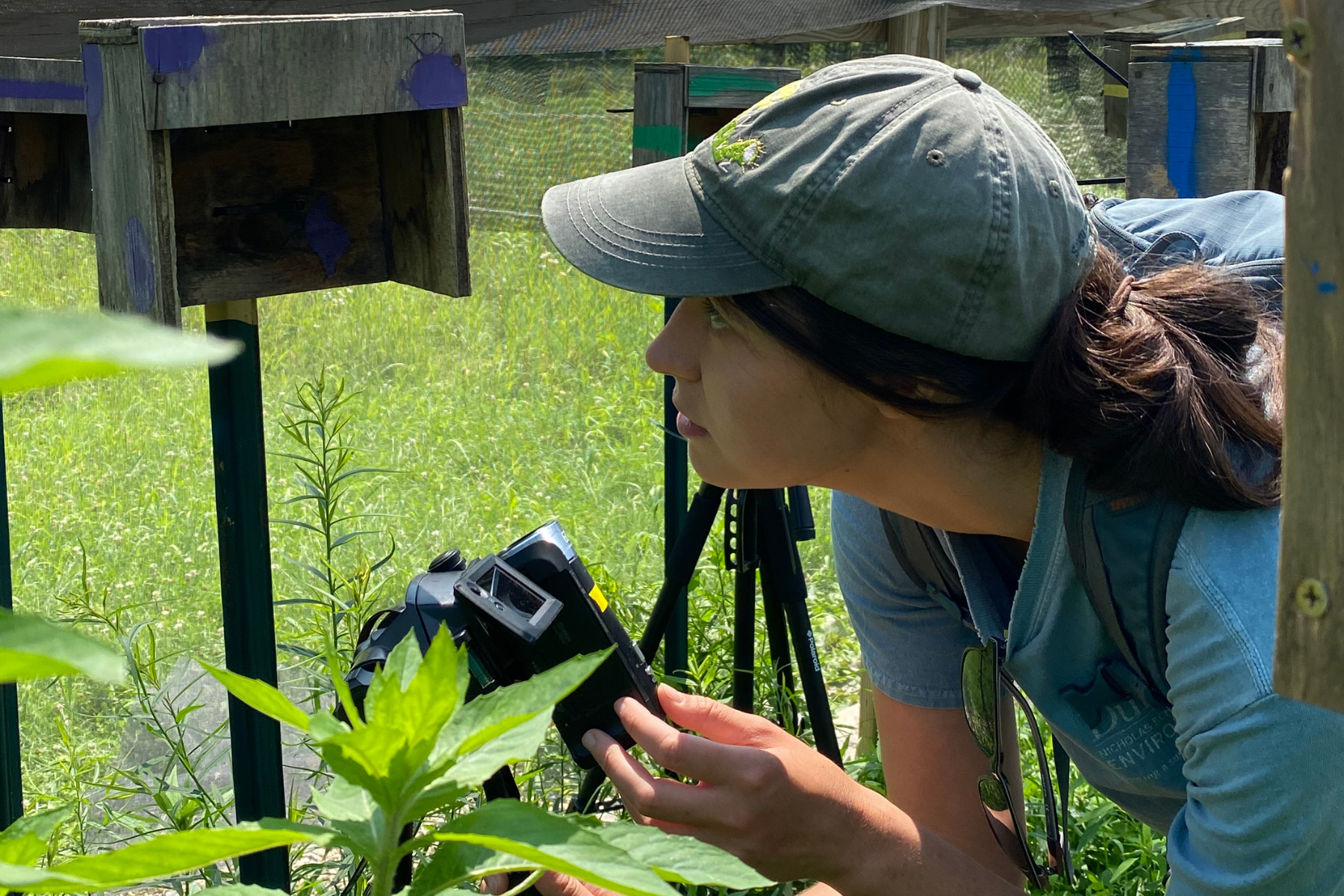 Laub conducts her fieldwork at a mesh covered site at the Matthaei Botanical Gardens, near the campus farm.

Another social aspect of paper wasps that interests Laub is the ways that they select their nest leadership.

Unlike bees, whose queens are hatched sporting enormous abdomens and other physical differences that indicate royalty, paper wasps campaign for queendom through ritualized domination contests.

After a skirmish, the winning paper wasp will flaunt her successes to her peers by climbing atop the vanquished wasp and drumming her antennas on the loser’s face until she bows her head down in defeat.

“The wasps know what their projected rank would be based on the contest outcome they observe with other wasps,” Laub says.

Not only do the wasps come to discover their rank and file through these skirmishes, but the “losers” also experience lower reproductive hormones resulting in the eventual emergence of a queen.

“Every wasp can go on to have its own genetic and reproductive destiny,” Laub says. “That’s not true for a worker ant or a worker bee.”

While Laub doesn’t think that human society should be modeling themselves verbatim off of paper wasps (“just imagine the office dynamics!”), she is incredibly excited about the potential of paper wasps in social behavior research.

“There’s a huge misconception that complex cognitive abilities are only the domain of large mammals. But we’ve found that you can do these really sophisticated and really fantastic things with a brain that’s smaller than a grain of rice,” Laub says.

“Working with wasps really gives me a greater appreciation for all of the different things that we share across the tree of life, rather than what makes us so incredibly special. And I think there’s actually something beautiful in that.”

Laub is the recipient of the Rackham Predoctoral Fellowship, which she says has been instrumental to her ability to pursue large, ambitious projects.

“One of the primary reasons that I actually chose to come to Michigan was Rackham’s research support,” Laub says. “Travel grants have allowed me to connect with and present my work to other scientists—and the Rackham Predoctoral Fellowship has allowed me to keep producing my research.”

Laub also expresses her gratitude for GEO’s continuous advocacy for great health insurance for graduate students. “Health insurance has really enabled me to do the best quality of work that I can.”