Home » Discover Rackham » What We Leave Behind

What We Leave Behind

Rackham and art history alumnus John Hunter has pursued art around the world. Now, he’s making sure future generations have the resources they need to chase their own goals through higher education. 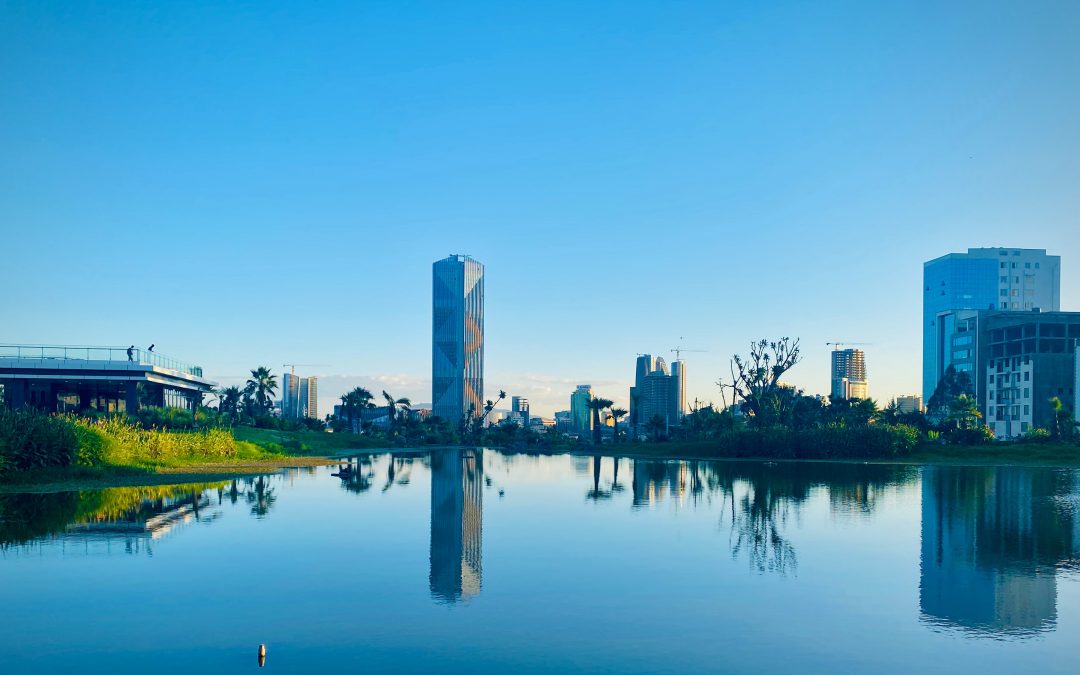 In the mid-1970s, John Hunter (Ph.D. ’83) suddenly found himself without a job. One of the many consequences of the 1970s energy crisis, the Detroit Institute of Arts (DIA) laid off many of its employees. Hunter, who worked in the DIA’s information department, was among them.

Having studied painting at Wayne State University as an undergraduate, Hunter seized the opportunity afforded by his newfound free time to pursue a master’s degree in art history at the University of Michigan, a decision inspired by his long proximity to art historians at the DIA. He followed his master’s with a Ph.D. in the same department, for which he received a fellowship from the Samuel H. Kress Foundation to spend three years working on his dissertation in Rome.

Upon completing his studies, Hunter took a faculty position in the Cleveland State University Department of Art and Design, rising to the position of department chair and eventually associate dean of the College of Arts and Social Sciences. In 2003, Hunter retired and moved to New York City to join his husband, clinical psychologist Harold Kooden, where he began to make art again.

In his retirement, Hunter turned his attention to the legacy he meant to leave behind. As a native Detroiter who wanted to help students like himself, he established a bequest for Wayne State University. At the same time, he renewed contact with Rackham and began learning more about its programs aimed at helping students from underrepresented backgrounds obtain graduate training, especially for students from African universities.

“Harold and I visited West Africa a couple years ago and talked to a lot of people working in the tourist industry,” he recalls. “They were young people, many of whom had started their undergraduate studies but couldn’t finish because of the expenses. It occurred to me that was really an issue in Africa, that they have all this intellectual talent, but a difficult path to higher education.”

After their trip, Hunter learned that Rackham offered a program meant to help remedy just that. Established in 2019, the African Undergraduate Research Adventure (AURA) program allows undergraduate students from the Addis Ababa Institute of Technology (AAIT) in Ethiopia to spend 12 weeks at U-M’s Ann Arbor campus and conduct research under the supervision of U-M College of Engineering faculty. Upon their return, they can use that research experience in their fifth-year thesis project and complete their degree.

“Finding out U-M had a program that in some ways directly addresses this need at the graduate level, I was enthusiastic about that,” Hunter says. “Africa is an enormous pool of talent with the potential to be a world leader someday, and it’s important that American institutions help that talent along. Since U-M is already in that game, I thought I’d be a player.”

As a result of his experiences, Hunter added a bequest in his will to establish the John Hunter Graduate Student Award, which would be used to provide students from institutions in sub-Saharan Africa with support to pursue graduate degrees in the humanities, visual and performing arts, and art history at U-M.

Recently, Hunter and Kooden decided to make a return visit to Africa, focusing this time on Ethiopia, where they hoped to help spread the word about the U-M programs to students during their travels. The pair met with Fitsum Andargie, the chair of computer engineering at AAIT and head of the AURA program, who arranged for them to give seminars at the University of Addis Ababa in art and psychology, Hunter and Kooden’s respective areas of expertise. 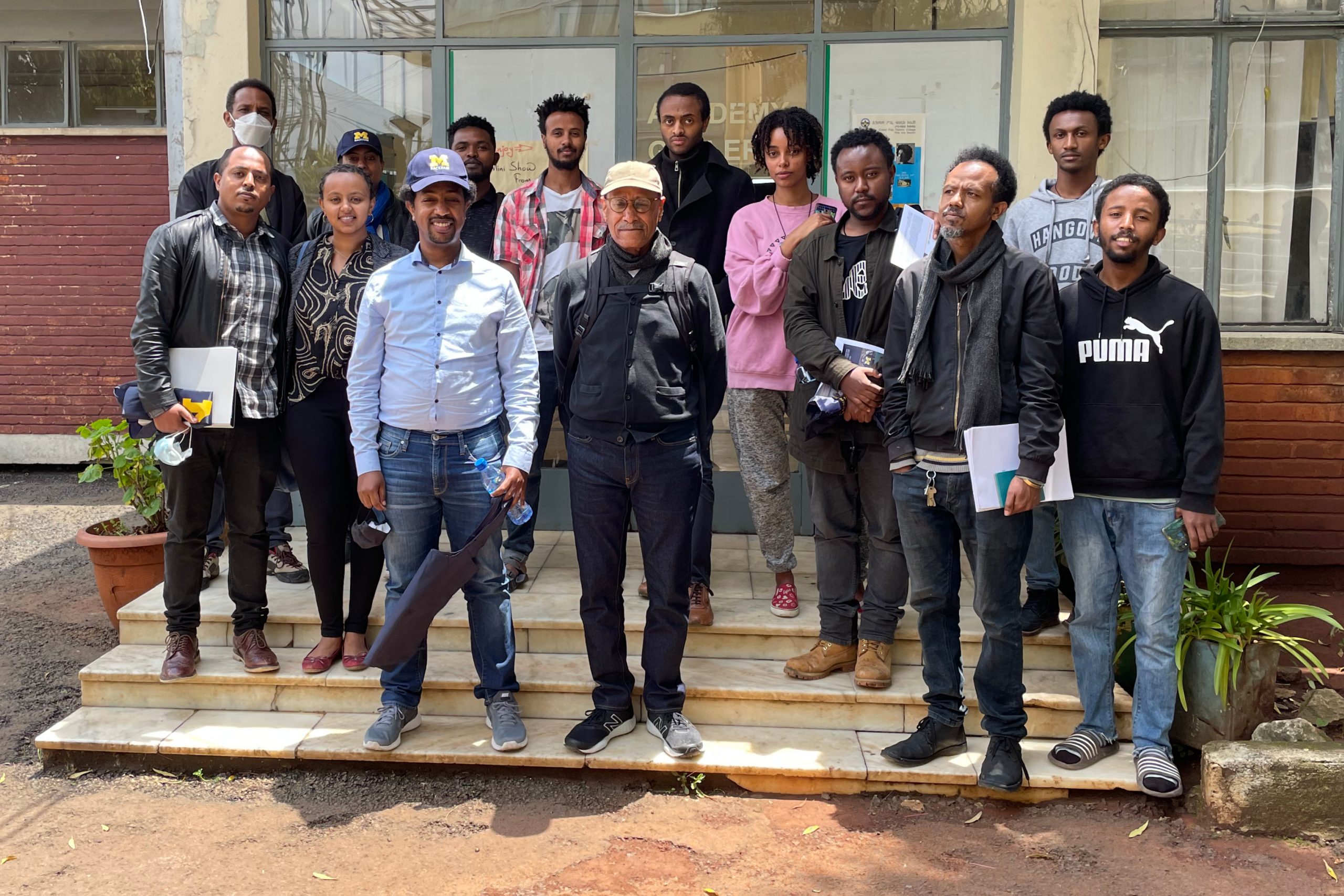 Fitsum Andargie (bottom step, left) and John Hunter (bottom step, second from left) stand with a group of students after Hunter’s seminar at the University of Addis Ababa.

Using a smartboard—for the first time ever, Hunter notes—he discussed his approach to art and the concept of art as a language unto itself, one that communicates ideas that supersede written words, to an eager, attentive audience of students and faculty. He also handed out brochures about U-M programs like AURA afterward.

“I had a large number of people attend my talk, and they were some of the best students I’ve had in my education career,” Hunter says. “They were delighted to receive the information about U-M’s programs, and I had a dozen or so express interest in applying then and there.”

Hunter hopes creating a pipeline of graduate-educated U-M alumni in Ethiopia will help improve the country’s own capacity for education.

“While I was there, the government was in the process of building five new campuses,” he says. “The problem is that it’s easier to build the physical infrastructure of higher education than it is to recruit the talent to teach there. There’s an intense interest in education—the campus was bursting with students—but it’s going to take time to develop the talent pool of well-trained professors. When that happens, though, we’re going to see a burst of creativity from Africa.”

In addition to outreach during his travels, Hunter is also a member of the Rackham Alumni Diversity Council, which convened in October 2021 and aims to gather alumni and friends of Rackham to share their knowledge and perspectives in order to improve Rackham’s diversity, equity, and inclusion efforts. Through this, Hunter hopes to help Rackham lower the barriers of entry and become a more inclusive, welcoming place for graduate students of color and members of the LGBTQ+ community.

“I’d like to make sure Rackham includes a diverse population, and sometimes you have to work extra hard to make sure people feel included,” he says. “That’s what’s so different from working in Africa. You’re working with students of color and LGBTQ students who are just dying to get into educational programs, but often face more problems and barriers in our country.”

As a graduate student, Hunter received financial and counseling support from Rackham over the course of his years at U-M. He also credits Rackham with helping him find the Kress Fellowship that enabled his studies in Rome.

“I received my fellowship from an institution outside the university, but Rackham facilitated the process of making sure students knew what fellowships and grants were available and helped them through the application process,” he says.