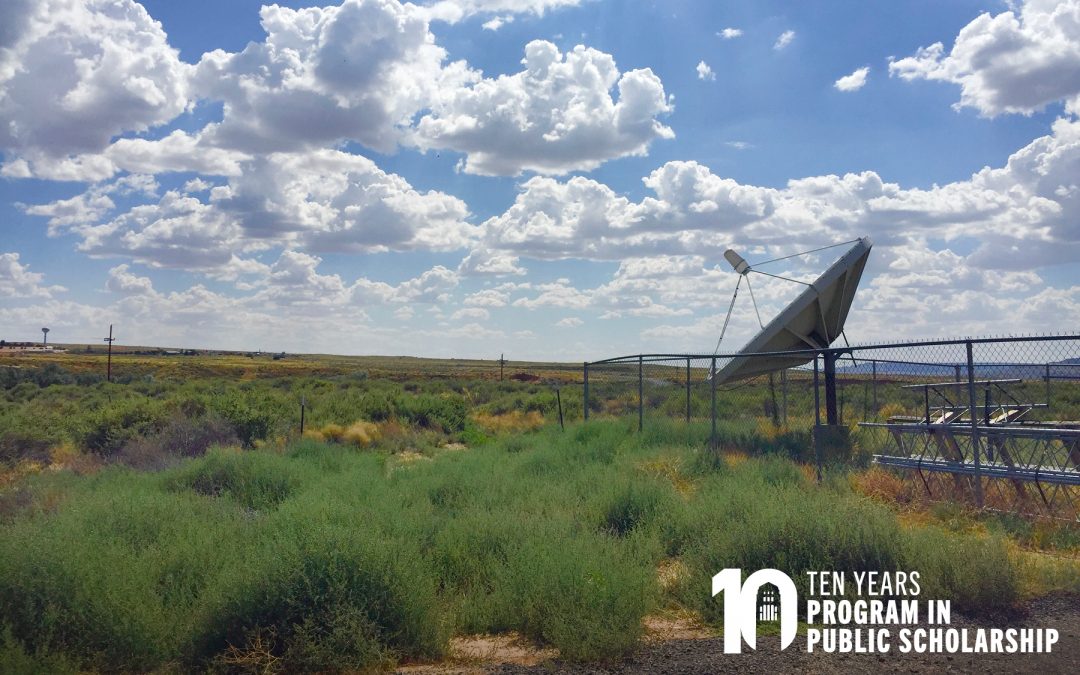 This article is the second in a series celebrating 10 years of the Rackham Program in Public Scholarship (RPPS), which supports collaborative scholarly and creative endeavors to engage communities and co-create projects that reach public audiences and have impacts beyond the university. RPPS provides workshops, grants, programs, and professional development opportunities for graduate students in any field.

With a population of just over 6,500 people, Bethel is the largest city in western Alaska. Situated on flat, mostly treeless tundra 50 miles upriver from the Yukon-Kuskokwim Delta, where the two longest rivers in Alaska meet and empty their contents into the icy, roiling waters of the Bering Sea, it forms the heart of the state’s Yup’ik Native American community. Many Yup’ik live as subsistence hunters and fishermen in the surrounding rural landscape, making Bethel an important point of connection with the wider world; with no roads connecting to any highway system, air travel is essential and forms the bulk of that lifeline. The city’s airport and its associated seaplane bases are critical hubs for transportation and trade, and one of its radio stations, KYUK—the oldest tribal radio station in the United States—plays a similarly important role: bringing information to the community over the airwaves.

Jana Wilbricht (Ph.D. ’20) was a Ph.D. candidate in the U-M Department of Communication and Media under the faculty guidance of Professor Jan Van den Bulck when she first set foot in the small, single-story building that KYUK calls home. As an undergraduate studying communications and developmental sociology at Cornell University, Wilbricht was involved in health-related research on the Hopi Reservation in Arizona under Angela Gonzales, an associate professor of developmental sociology and Hopi tribal member. In the course of her studies, Wilbricht learned about the significant disparities in health and healthcare facing Native American communities across the country.

“Health is a major issue,” she says. “Indigenous groups have the worst health of any group in the U.S., especially on rural reservations—this has been brought into sharp relief by COVID-19, which has seen the mortality rate of indigenous Americans double that of white Americans. Many of these communities have limited access to running water, and even more so to information on healthcare.”

In places where preventable diseases remain serious, and sometimes fatal, conditions as a result of these limitations, tribal radio stations stand as one of the few ways that Native American communities can obtain reliable, accessible healthcare information.

“Radio is kind of it for rural Native American communities,” Wilbricht says. “It’s the easiest way to access information—you don’t need an electrical grid, internet access, or cell phone service—just batteries. And the stations are aware of their role as the sole source of information for many in their communities. They see themselves as advocates for and protectors of their communities.”

While the role of tribal radio stations in relaying health information is well known, documenting the extent of their impact has not received much scholarly attention. Even as they work to reach more listeners, and do so in more effective ways, most tribal stations have limited resources that do not allow them the luxury of conducting audience research to better inform their decision-making. This was a gap Wilbricht aimed to help fill. 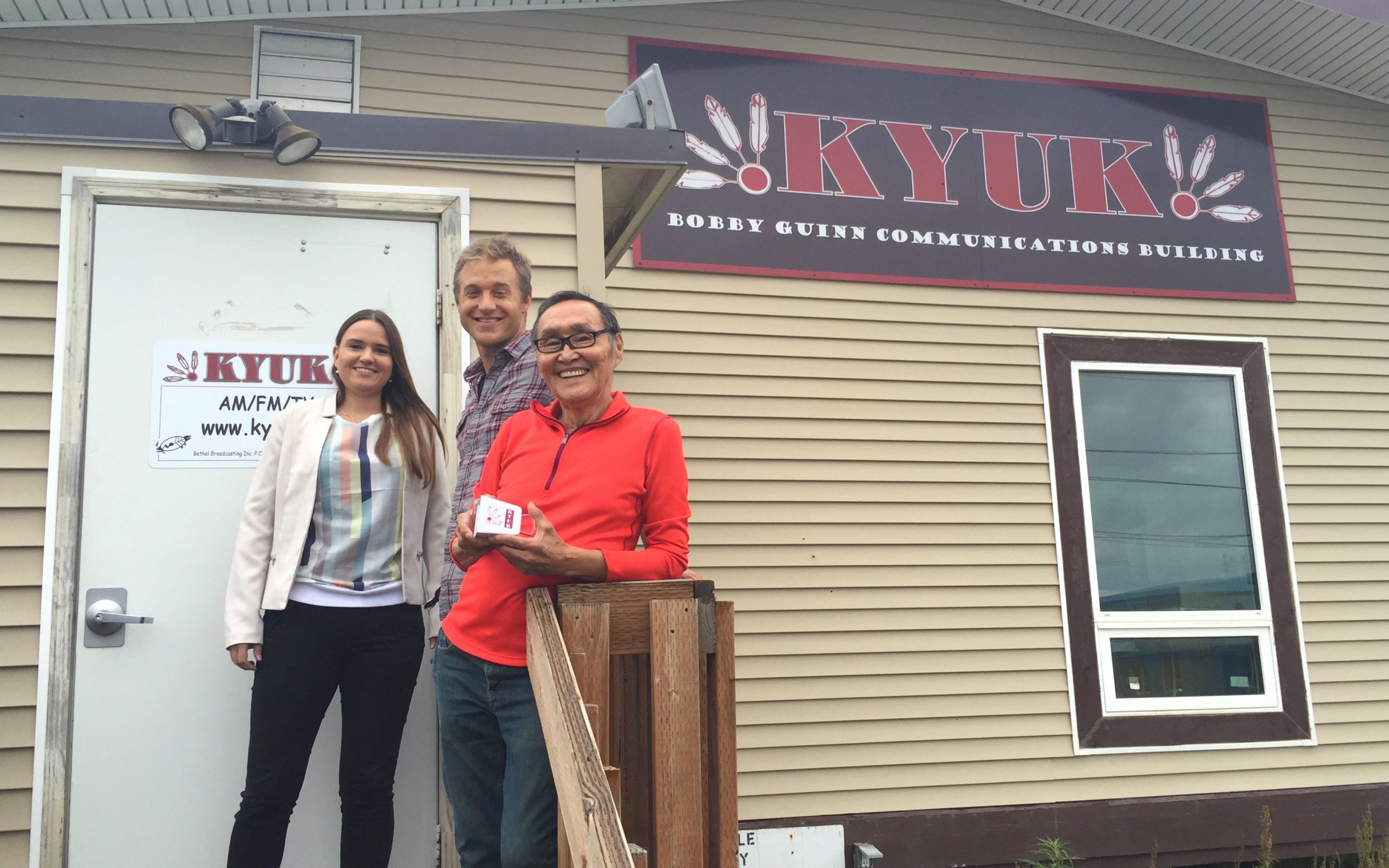 Wilbricht reached out to two tribal radio stations that would form the core of her study. As a result of her undergraduate work, she was already familiar with KUYI on the Hopi Reservation. Deriving its name from “kuuyi,” the Hopi word for “water,” as an illustration of the vital place information holds for the community’s well-being, KUYI has been broadcasting since 2000. The other was KYUK, which has operated continuously since 1971 and has served as the model for many of the tribal radio stations that came after.

As a cultural outsider, Wilbricht approached both the Hopi and Yup’ik for permission and to ensure that her work addressed the needs of not only her dissertation, but those of the tribal communities, as well.

“There was tremendous support for my work,” she recalls. “I’m not a tribal member, I don’t speak their languages, I was just a scholar, but everyone was eager to talk and thought the work was important.”

In 2015, Wilbricht received an $8,000 grant from the Rackham Program in Public Scholarship to travel to both stations—she received an additional Rackham summer research grant for the extra expenses of traveling to KYUK in Alaska—and conduct her research. There, she held one-on-one interviews with station staff members to understand their identities as broadcasters and journalists working under the oversight of a tribal board. She also worked with the stations to develop and host focus groups for audience members in order to understand their needs and whether the stations’ programming was meeting them.

Language ranked among the chief topics of interest to both the radio stations and their listeners. Traditionally, tribal stations broadcast their programs in both indigenous languages and English in order to reach everyone in their communities. Many stations translate every program segment and rebroadcast it, playing the same material twice. With many younger tribal members learning only English, stations worried that they were not only wasting effort, but also annoying listeners in the process. Wilbricht’s work with focus groups found that audiences actively appreciated the bilingual programming, and wanted more of it.

Wilbricht says that many important health topics are personal, private, and difficult—such as teen suicide or substance abuse—and community members preferred to hear about them in their own languages. According to the focus groups, many of the terms and phrases used in their own languages do not translate directly or well into English. Using indigenous languages in their programming not only preserves the personal nature of difficult topics, but expresses them in ways that work within the communities’ own understanding and way of thinking about them, as well.

And even as fewer tribal members speak, or speak primarily, their indigenous languages, listeners still found value in bilingual programming as a way of staying connected to their cultural heritage.

“When the station was thinking about cutting back its bilingual programming, we found that the audience wanted even more,” Wilbricht says. “It was a reminder of who they are as a people, and what distinguishes them from the other communities around them. They also reported that the bilingual programming inspired them to learn their language, too.” 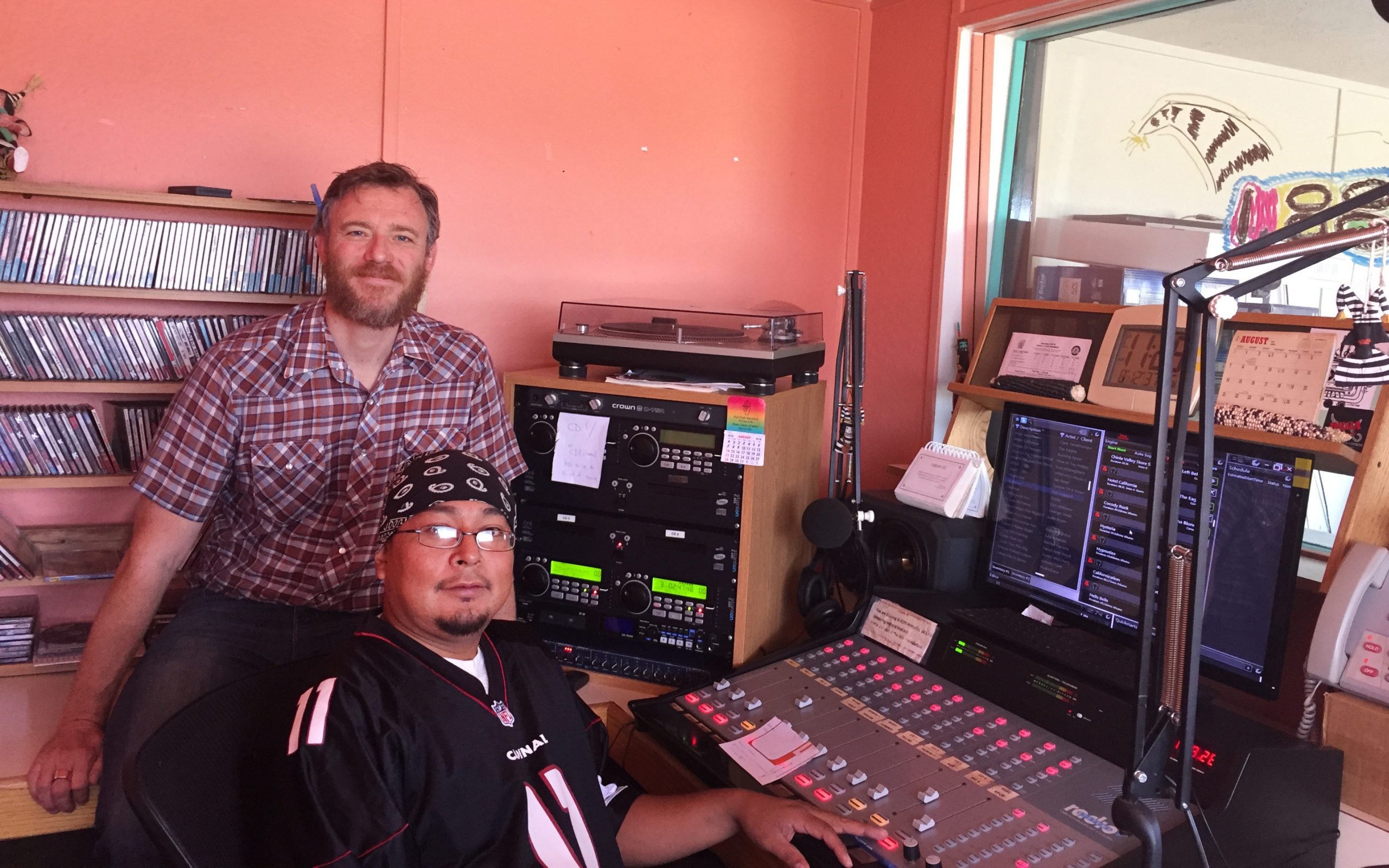 KUYI general manager Richard A. Davis (left) and one of the DJs pose inside the KUYI radio station.

On the Same Wavelength

Wilbricht’s findings emphasized the importance of tribal radio as a trusted source of information because it communicated localized health information in ways that national public service announcements from places like the Centers for Disease Control and Prevention (CDC) can’t. For example, specific information relevant to subsistence lifestyles, such as the health risks of hunting with lead bullets, aren’t well communicated in other formats, while many national dietary recommendations can’t be feasibly applied in the rural contexts of many reservations—half of a watermelon, Wilbricht says, cost $37 in rural Alaska.

“They had immense trust in their stations, as opposed to other sources like the CDC or the white doctors who would come to visit the reservation,” Wilbricht says. “But the radio stations encouraged healthy eating based on what is available to their listeners. The same goes for visiting clinics. A person might be hesitant to go on their own, but if they hear a program on KUYI tell them to see a doctor, they’re much more likely to go.”

The value of the stations as community spaces was also apparent. As one of the only sources of information common to the entire community, it brought together people of different generations, occupations, and interests.

“Radio isn’t just a medium for older people, like it often is in other communities,” Wilbricht says. “It’s played in homes and workplaces, on school buses and in grocery stores. It includes all generations and brings the community together, and because of that, the stations also come to know their communities and their needs very well.”

Wilbricht made her findings available to tribal leadership groups and to the station managers at KYUK and KUYI, where it is helping inform the future directions of the stations. This includes the formation of on-air support groups, such as for adult caregivers, as well as continued bilingual programming.

“This is a really under-researched topic, and it’s one I’ve become very personally invested in,” Wilbricht says. “This was a helpful project for the radio stations and tribes, and even playing a small part in helping them has been incredibly rewarding.”

Learn more about the tribal radio stations at the KUYI and KYUK websites.
Other Stories in This Series:

In addition to support from the Rackham Program in Public Scholarship and summer research funding, Wilbricht is a recipient of the Barbour Scholarship and participated in Rackham’s Institute for Social Change, the Mellon Public Engagement and the Humanities Workshop, and the Rackham DEI Professional Development Certificate Program. She also received multiple Rackham Conference Travel Grants to present her work on tribal radio at 20 conferences.
Tags: alumni spotlight, Communication and Media, program in public scholarship