Home » Discover Rackham » Mining the Past

With support from the Rackham Program in Public Scholarship, anthropology alumnus Colin Quinn helped start a program that connects a Romanian community with its mining heritage. 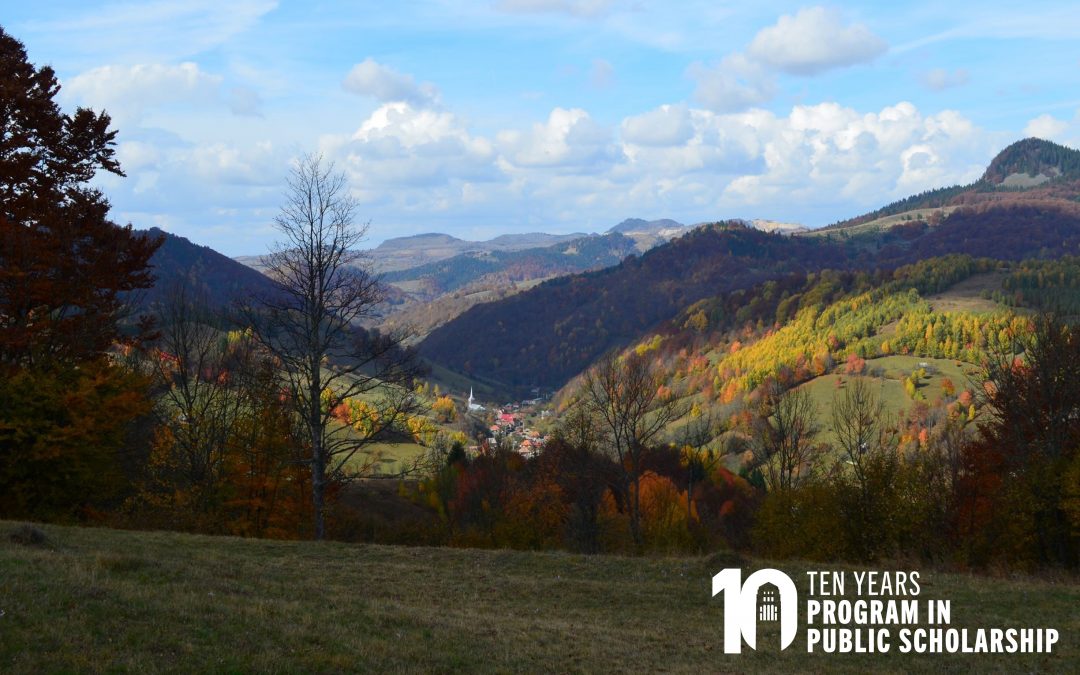 Poieni, one of the villages of Bucium, follows the valley floor. In the distance, the open pit gold mines of Roșia Montană loom over the landscape.

This article is the third in a series celebrating 10 years of the Rackham Program in Public Scholarship (RPPS), which supports collaborative scholarly and creative endeavors to engage communities and co-create projects that reach public audiences and have impacts beyond the university. RPPS provides workshops, grants, programs, and professional development opportunities for graduate students in any field.

Long before Bram Stoker made it the realm of vampires, twisted forests, and Gothic castles, it was gold that drew people to Transylvania. The storied region of central Romania, bounded by the towering, wintry peaks and deep, wooded valleys of the Carpathian Mountains, is home to the third largest deposit of the lustrous metal in the world, and the largest in Europe. Rich deposits of copper, iron, lead, salt, sulfur, coal, manganese, and natural gas exist alongside the gold, making it one of the continent’s preeminent mineral districts.

Its human history runs as deep as its veins of ore; successive generations of people, from Bronze Age hunter-gatherers to Roman armies and modern mining corporations, have sought its vast mineral resources. It was a desire to better understand the beginnings of that legacy that drew archaeologist Colin Quinn, then a Ph.D. candidate in the U-M Department of Anthropology, to Bucium in western Transylvania, but he quickly learned he didn’t have to dig deep to discover a vibrant living history just beneath the surface. 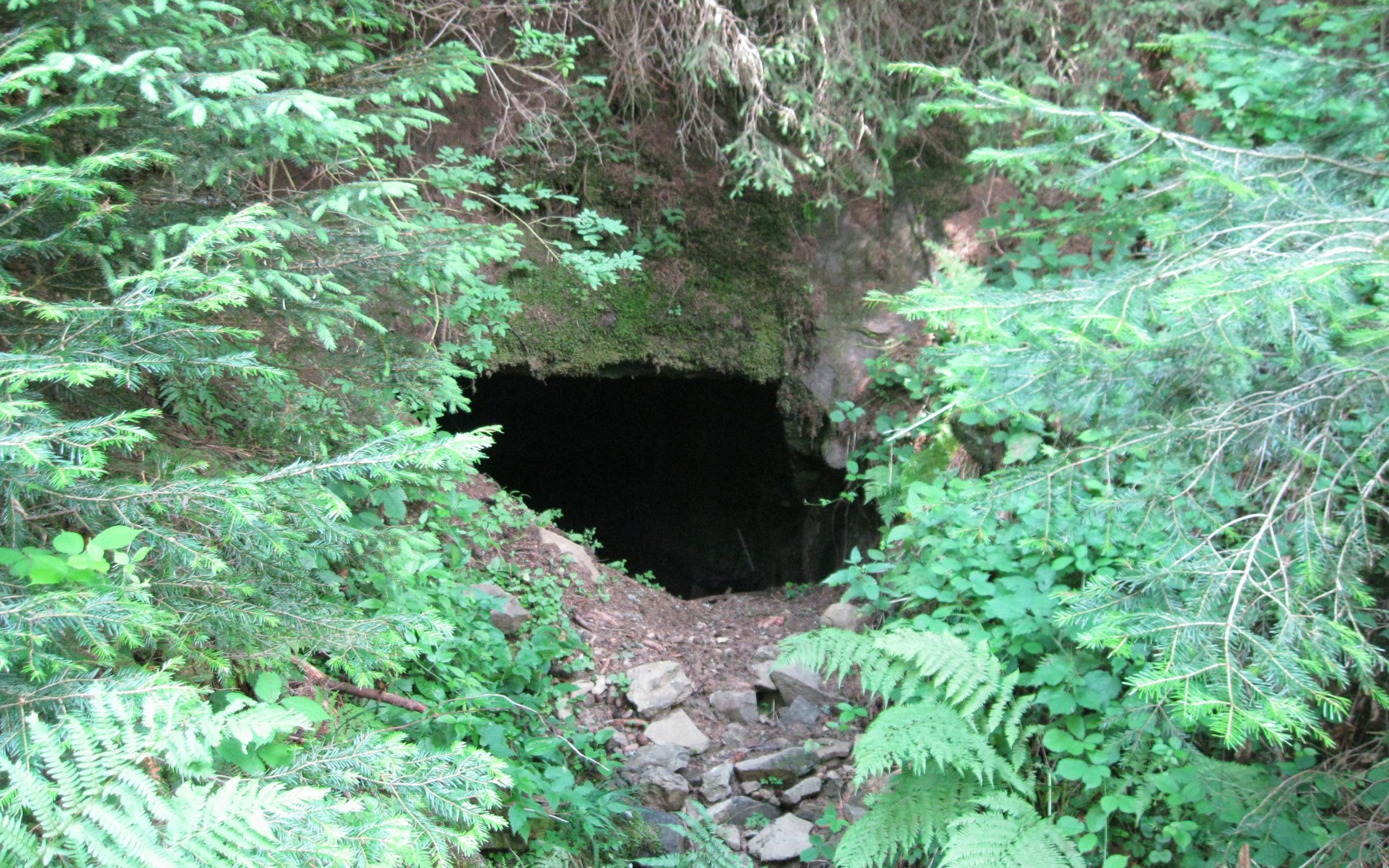 The opening of an abandoned mine shaft in Bucium originally constructed by the Romans nearly 2,000 years ago. Features such as this, Quinn says, are an important reminder of the deep history of mining in this landscape.

Rather than a single town, Bucium is a collection of villages nestled in the Apuseni Mountains—a tributary range of the Carpathians riddled with caverns and mine tunnels—laid out in linear patterns that follow the natural contours of the valleys. When Quinn first arrived in 2011, he found winding roads lined with traditional wooden homes built of stacked, hewn logs stained rich dark shades of brown and topped with thatched roofs, with a handful of more recently constructed dwellings mixed among them. Outside the villages, herds of sheep, cattle, and goats roamed meadows and fields of wildflowers.

“The region reminds me of the Appalachian Mountains,” Quinn recalls. “When you’re there, you feel like you’re simultaneously in the present and that you’ve traveled 200 years into the past. It’s a mixture of modern and traditional lifeways, and it’s a beautiful place.”

Quinn came to conduct archaeological research for his doctoral dissertation, which sought to understand the connection between copper mining and the emergence of social inequality in the Bronze Age. But the land around Bucium spoke to the entire breadth of the region’s history. Prehistoric surface pits and trapezoidal Roman gallery mines—Bucium and the nearby commune of Roșia Montană have more Roman mining sites than anywhere else in the entire territory of the empire—lay alongside Medieval, historic, and modern mining sites. At an intersection in Bucium today, there still stands a cross inscribed with an image of crossed hammers and a message that reads, “Good luck and health to all the miners.”

“It’s a history of industry written into the landscape,” Quinn says. “It’s a mining area, it has been for nearly its entire human history, and the people who live there remain connected to and identify with that past.” 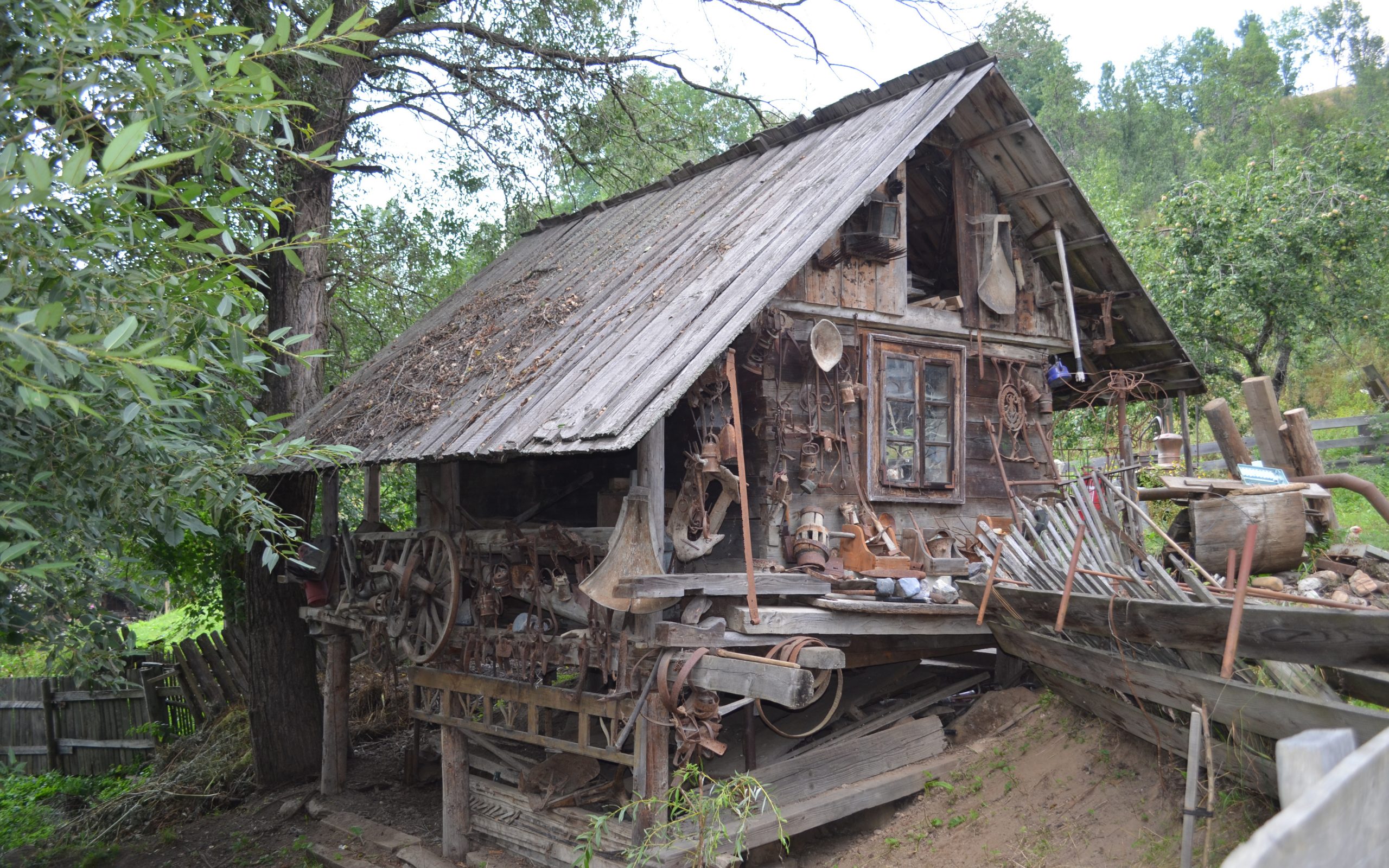 A barn in Bucium with many old mining tools. The two large, fan-shaped wooden tools hanging on the front of the barn are șaitroc, used to pan for gold.

After a long day in the mountains in 2013, during his third year of fieldwork in the Apuseni, Quinn was sitting on the porch at the home of his local collaborator, Horia Ciugudean, an archaeologist and senior researcher at Romania’s National Museum of the Union. In the course of conversation, Ciugudean told Quinn about a new, controversial mining development in Roșia Montană, a mere one valley over from Bucium. A transnational mining corporation was buying up land for strip mining, intending to detonate several mountaintops and extract gold using cyanide. While the company stated its mine would be behind a dam with an ice barrier to prevent the toxic chemicals from percolating into the ground water, it was unclear how funding for the preventive measures would be provided, and the project was facing strong opposition from local heritage groups and other non-governmental organizations (NGOs).

Quinn’s comparison of Bucium to the coal mining communities of Appalachia goes beyond the aesthetic. While mining is pervasive in the lives and cultures of both places, he says, many NGOs on either side of the Atlantic have taken anti-mining stances as a result of the negative impacts that modern mining endeavors often have on both the local environment and on community identity.

“People in Bucium identify themselves through their craft, but the problem is that in the decades since the communist era, the local communities have become divorced from those practices by centralized, state-controlled metal production,” Quinn says. “Everything goes through the state, and individual households can’t mine like before. What happens when several generations of these mining communities are no longer bound by that craft?”

Old Ways of Life Made New

After discussions with community members and Romanian heritage NGOs, they saw an opportunity for Quinn to lend his expertise in material culture to their efforts to engage with the younger members of the community—many of whom are leaving the area in search of better economic opportunities elsewhere—to highlight the richness of their local history and heritage. Through an $8,000 grant from the Rackham Program in Public Scholarship (RPPS), Quinn and his community partners started a series of heritage days to demonstrate vintage mining tools and techniques for the public.

The team hired local carpenters to produce historically accurate replicas of wooden mining tools, using the same handcrafted methods that would have been employed 200 years earlier. The team then asked some of the community’s old miners, now in their 80s, to demonstrate how those tools were used. It was an event that drew much of the community, and the miners were able to regale their grandchildren and great-grandchildren, many of whom had never had the opportunity to see them use the tools of their trade, with the tales of Bucium’s past. These included the locally famed story of a 19th-century uprising that saw the community overthrow an oppressive French mining corporation. 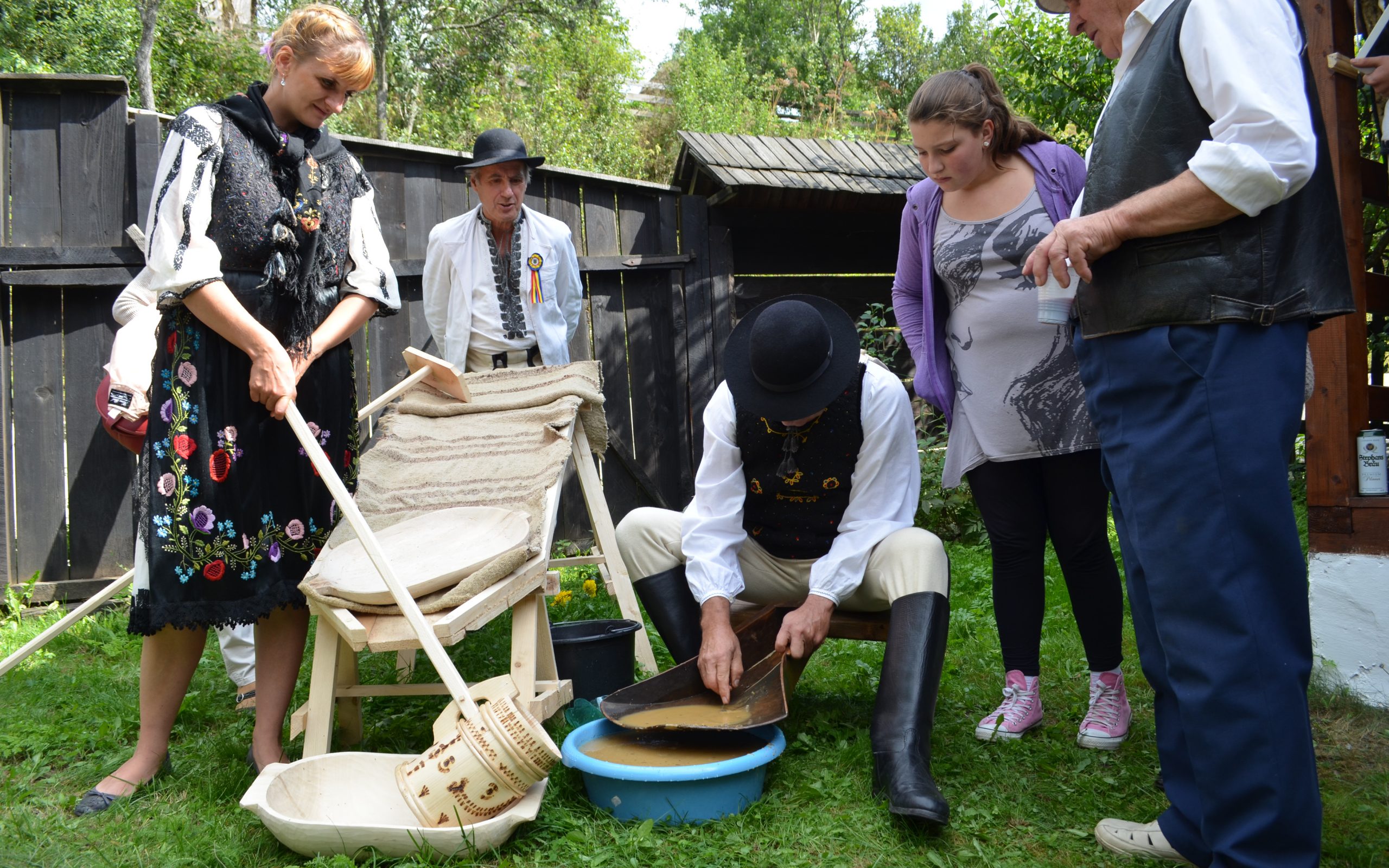 A Bucium community member uses a șaitroc and water to separate gold flakes from the surrounding sediment while members of many generations look on during the heritage event. Some community members wear traditional clothing.

“The people were locked up for what they did, of course, but it’s a story about the people fighting back and reclaiming their rights and land from outsiders,” Quinn explains. “And when it’s told against the backdrop of resistance to American-funded Canadian mining companies that are there now, you can’t help but see the parallels.”

Finding new ways forward while staying connected to their past lay at the heart of the event.

“Being divorced from mining practices undermines how they identify themselves as a community,” Quinn says. “They don’t want to all be miners again, but they’re proud of that heritage and they want to incorporate it into a future development plan that can provide a sustainable future for their children and grandchildren. They want to allow people to maintain their connection with the landscape around them.”

While the protests—the largest since the overthrow of the communist regime in 1989—ultimately thwarted the Roșia Montană strip mining operation, the future of the region remains in a state of flux. Though mining operations continue to try to gain a foothold, there is now a rival campaign underway to turn Roșia Montană into a UNESCO World Heritage Site. And the heritage days begun by Quinn and his colleagues have continued, taking place every two years. The project has expanded to include exhibitions on traditional medicine, as well as the creation of a digital database of photographs the team gathered of historic mining equipment alongside material from family photo albums that showcase life in the region.

“Without the funding from the Rackham Program in Public Scholarship, we wouldn’t have been able to pull any of this off at all,” Quinn says. “It gave me the opportunity to meet community needs and goals in a way that really centers the community’s people and their voices.”

Other stories in this series:

In addition to the support from RPPS, Quinn was a recipient of a Rackham International Research Grant. He also participated in the Engaged Pedagogy Initiative, which helped him develop the teaching skills he uses as an assistant professor of anthropology at Hamilton College.