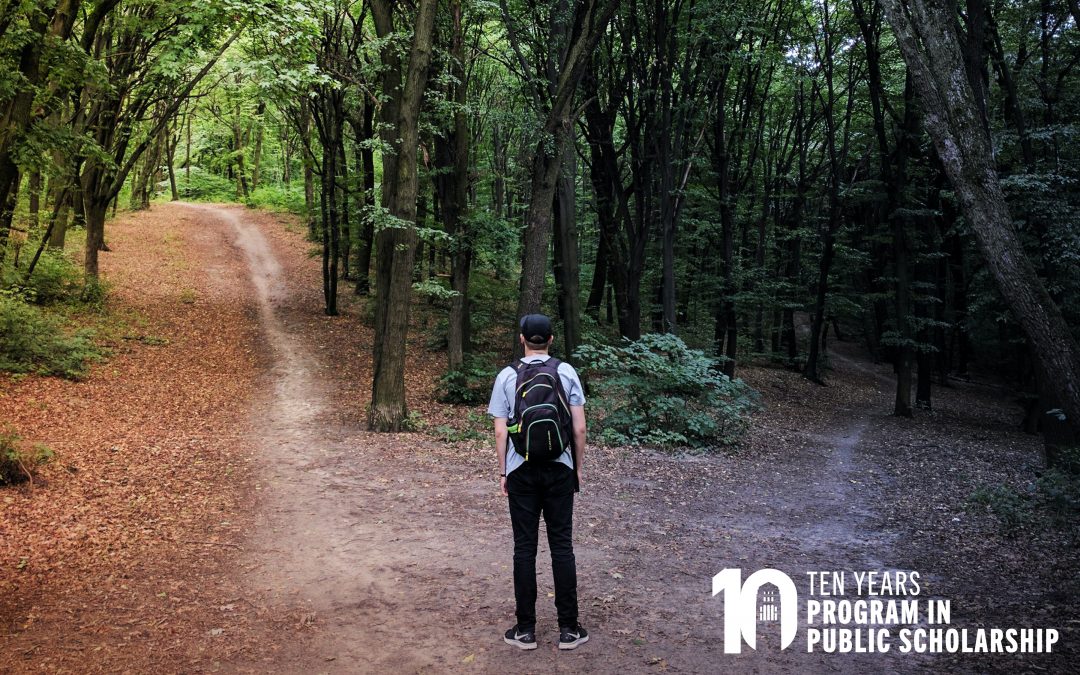 This article is the first in a series celebrating 10 years of the Rackham Program in Public Scholarship (RPPS), which supports collaborative scholarly and creative endeavors to engage communities and co-create projects that reach public audiences and have impacts beyond the university. RPPS provides workshops, grants, programs, and professional development opportunities for graduate students in any field.

What defines right action, and how such actions can be applied consistently to real-world situations, has been the subject of philosophers and ethicists going at least as far back as Socrates, and it’s a conversation that continues today, over 2,500 years later.

It is a conversation Zoë A. Johnson King (Ph.D. ’18) has always relished. After completing her undergraduate and master’s degrees, she took a job teaching secondary education in south London, where she grew to love teaching philosophy in particular.

“That age, around 16, is when everyone is just starting to come to grips with their values, beliefs, and the meaning of existence,” she says. “They’re starting to confront the big questions, and every day brings a new opportunity to really broaden someone’s perspective.”

While she would miss teaching secondary school, Johnson King always knew she wanted to return to academic philosophy and so came to U-M as a Ph.D. student in the Department of Philosophy in 2013. Her long-standing interests in moral psychology and moral education drew her to focus on moral uncertainty—how people reason their way through complex, morally fraught situations that may cause them to feel pulled in multiple directions at once. And while many works of philosophy tackle hypothetical scenarios and thought experiments, Johnson King chose to work primarily with real-life case studies.

“All the cases I used were real-life examples with the names of the people involved changed,” she says. “That made them more complicated, but it also made them more sensitive to the concrete reality of what everyday moral reasoning is like. It helped me capture the subtlety and nuance of being a moral agent in the world more than you get from more imagined scenarios.”

At the same time Johnson King was examining how people apply ethics to their daily lives, Jeanine DeLay, a former U-M philosophy lecturer and co-founder of A2Ethics—a nonprofit dedicated to promoting ethics and philosophy initiatives in local communities—reached out to U-M philosophy graduate students with a proposal that promised to meld Johnson King’s two interests.

Building on a national model begun at the University of North Carolina at Chapel Hill about a year earlier, A2Ethics wanted to bring a new program to local Ann Arbor high schools—the ethics bowl.

Part debate competition, part collaborative dialogue, ethics bowl competitions see teams of high school students apply ethical principles to a variety of real-world case studies, with responses from the rival team and questions from a moderator all aimed at developing their stance to its fullest extent. A panel of judges evaluates their final stance, awarding points for the construction of the team’s argument and engaging in civil dialogue.

“It’s an exercise in figuring out the best answer to a question, rather than just beating the other team, with the power of your mind,” Johnson King explains. “As soon as Jeanine pitched us the idea, I knew I wanted to help. It was exactly what I wanted out of an extracurricular activity.”

Johnson King and DeLay got to work setting up a Michigan regional ethics bowl, the winners of which would go on to compete in a national championship at UNC. During their first year, they focused on building partnerships with five high schools in the Ann Arbor area, working with faculty members to recruit teams, and having those teams work with U-M philosophy graduate students to strengthen their understanding of ethics and develop their stances on each case study. Since case studies are assigned at random at the ethics bowl competition, teams were best served by preparing for all of them.

One of the defining features of Michigan’s Ethics Bowl, distinguishing it from other state competitions, is the local focus of its case studies. Instead of picking issues from around the country, Johnson King and DeLay source their cases from the local and state community, ensuring that their teams were grappling not only with difficult ethical situations, but ones that hit home, as well. These included issues like the managing the faltering wolf population in Isle Royale National Park, or issues surrounding felon disenfranchisement.

“We write up our own case studies, working with people from our own communities,” Johnson King says. “It not only makes them local, it makes them intergenerational and often very personal.” 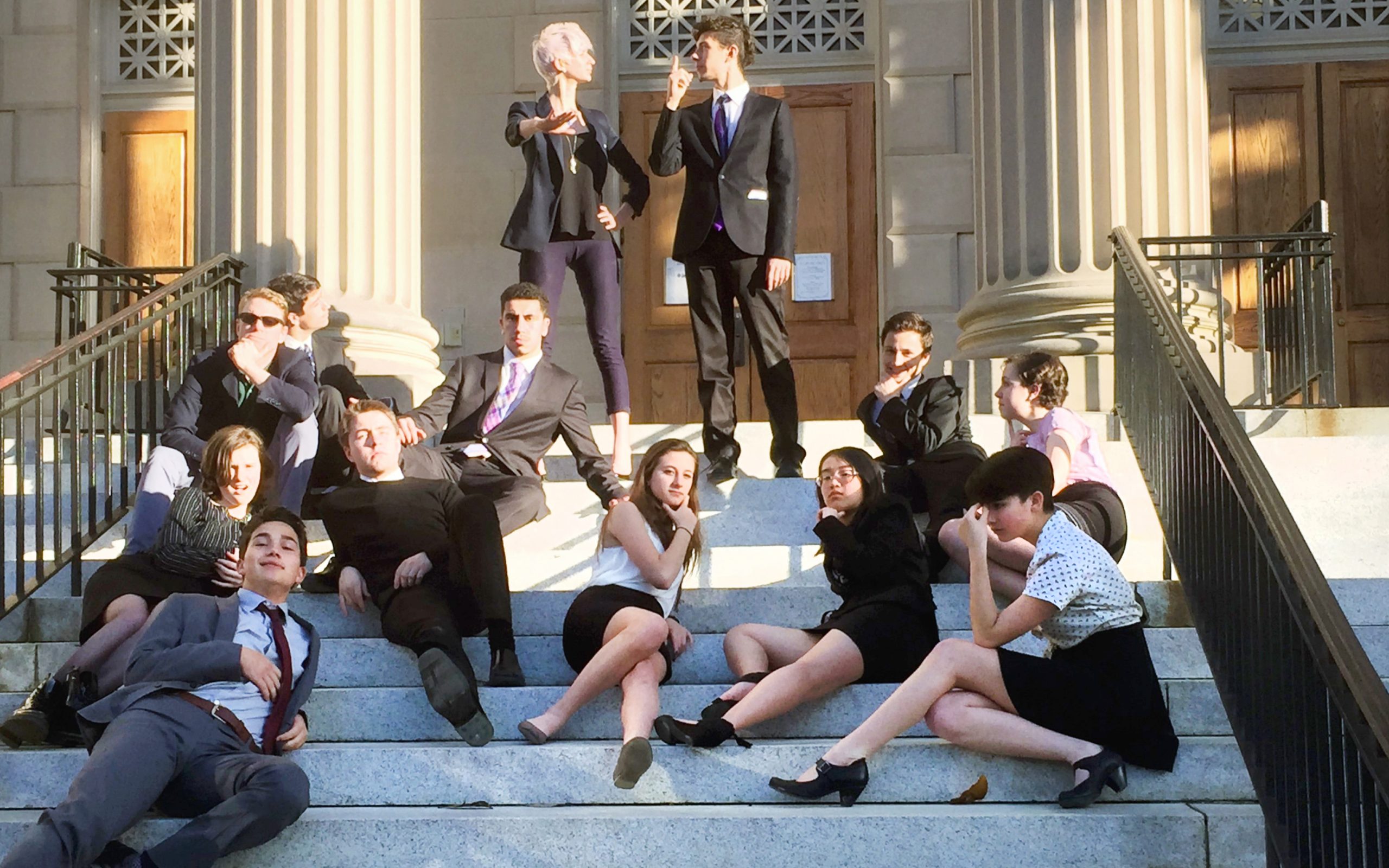 After the first year, Johnson King and her colleagues wanted to not only continue the Ethics Bowl, but to expand it into nearby cities like Ypsilanti and Detroit, and even further. But asking graduate students to coach teams at more distant schools, and asking those schools, some of which had limited financial resources of their own, to send their teams to Ann Arbor to compete was not an insignificant request. Johnson King turned to the Rackham Program in Public Scholarship for help, receiving an $8,000 grant to support travel, stipends for the graduate student coaches, and event expenses.

The additional support allowed six more schools to join the Michigan Ethics Bowl, and for the graduate student coaches to visit their teams numerous times over the course of the school year. As a second-year graduate student, Johnson King not only coached the Ann Arbor Pioneer team—all the way to victory, she adds—but she also recruited most of the coaches and organized the events, which were hosted at Palmer Commons on the U-M Ann Arbor campus.

After the competition, Johnson King worked with the chair of the U-M Department of Philosophy to invite members of her team to the department’s year-end celebration, where they spoke about how studying ethics had helped them change and grow, and inspired some of them to pursue undergraduate majors or minors in philosophy. It was a moment that brought home the value of the ethics bowl, and the department committed to funding it in perpetuity.

“The second year was the most formative year of the Ethics Bowl,” Johnson King says. “That was when it solidified into something that was going to last. The support from Rackham allowed us to transform it from an experiment into a sustainable program that could continue from year to year and had committed schools and resources.”

Johnson King completed her doctoral program in 2018, but the Ethics Bowl has continued to draw new students from around the state, even amid the challenges presented by the COVID-19 pandemic. Teams prepared remotely this year, and will compete in the first-ever virtual Ethics Bowl in the first week of February, 2021. It’s a year Johnson King believes studying ethics has become even more important for high school students.

“Training people to give reasons for why they believe and act as they do, and to assess the strength of those reasons, has only become more relevant,” Johnson King says. “We’re training people to reason their way through a complex, considered opinion on important current moral and social issues. To my mind, that’s the skill you need to engage other people in good faith and effectively navigate democracy in the United States and elsewhere.”

Other Stories in This Series:

In addition to the Program in Public Scholarship support for the Michigan Ethics Bowl, Johnson King received a Rackham Predoctoral Fellowship, which gave her more time to focus on her job search during the final year of her program.

“I did very well on the job market, and I’m sure a large part of that is I had a lot more time to hone my material,” Johnson King says. “It was a clear and tangible benefit.”