Every Year a Story

In addition to Earth Day, 2020 marks the 50th anniversary of the Ecology Center. Rackham English language and literature Ph.D. candidate Elizabeth Harlow is helping them commemorate the occasion through online storytelling. 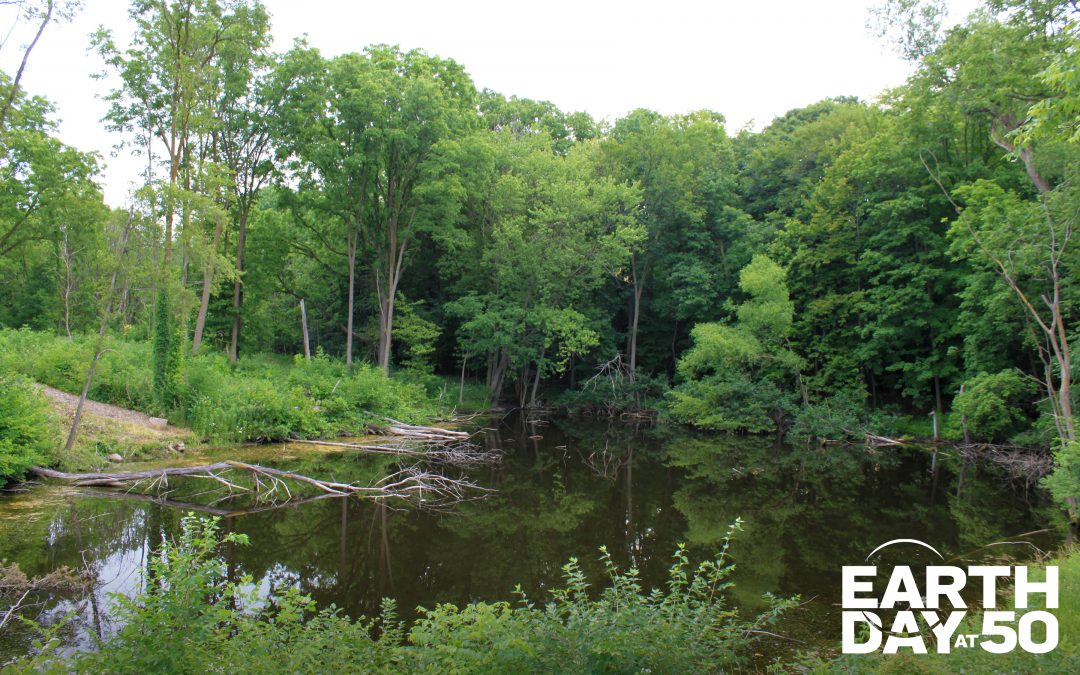 This article is the fourth in our Earth Day at 50 series, highlighting research by graduate students across Rackham’s four divisions—biomedical sciences, physical sciences and engineering, social and behavioral sciences, and humanities and the arts.

Fifty years ago, more than 50,000 people descended upon Crisler Arena to hear from leaders in science, business, politics, activism, and entertainment discuss the environment during the ‘Teach-In on the Environment.’ Organized by a group of U-M students, the massive event aimed to raise awareness among the public of a wide range of environmental issues and encompassed approximately 125 events throughout the community, including rallies and workshops at U-M and local high schools. The first Earth Day, building on the momentum started by this passionate group of students, was celebrated around the country a mere five weeks later, and the modern environmental movement had begun.

April 1970 is home to another important 50-year anniversary, as well. In the wake of the first Earth Day, many community activists were faced with the question—now what? How could they channel the excitement and energy generated by Earth Day into something that would bring about lasting, positive change in the environment? One piece of that answer in Michigan was the Ecology Center, an Ann Arbor institution still in operation today. Devoted to the idea that a healthy planet means healthier people, the Ecology Center organized the first municipal recycling program in Michigan, helped win federal mandates to remove lead and mercury from automobiles, and created one of the largest land conservancy programs in the country.

“The goal of our project is to promote the next fifty years of environmental action by raising awareness of past local struggles and successes, and by encouraging personal reflection,” Harlow says. “It’s an opportunity to help educate people about what’s happened in the past and how that connects to what’s happening today and can happen in the future.”

The Story of a Movement

In order to capture the extent of both the Ecology Center’s impact and the gauntlet of environmental issues facing communities today, Harlow’s storytelling tackles a wide range of subjects. Published on the Ecology Center’s website, the series began in January and will continue weekly throughout the year, ultimately resulting in fifty stories, one for each year of the center’s existence.

Harlow has particularly relished the opportunity to dig deep into both the history of the Ecology Center and the larger environmental movement in the United States. With research and archival support from U-M graduate and undergraduate students, these include retrospectives on some of the center’s long-running campaigns, such as its role in the decades-long struggle to shut down waste incinerators across the state, most recently the Detroit Renewable Power facility in Detroit. It was the largest trash incinerator in the world at the time it was built and severely impacted the health of surrounding communities, mostly low-income and people of color, who suffered the highest asthma rate in the state. She was also able to tackle the stories of important figures in the Ecology Center’s history, like Elizabeth Grant Kingwill, who while still a student in the U-M School of Natural Resources—now the School for Environment and Sustainability—did much of the work to actually set up the structure of the Ecology Center.

“I’ve gotten to write about everything from the ongoing effort to fight lead poisoning in Flint to toxic chemicals in consumer products to the vital work of an unsung woman leader,” Harlow says. “A lot of the stories are focused around environmental justice, because not only does environmental justice underlie almost all of environmental and public health, it’s been largely overlooked in the earlier histories of environmental action and activism. It’s really important to shine a light on that.”

Harlow’s interest in the intersection between storytelling and the environment goes beyond this one project. Harlow has devoted a chapter of her dissertation, which focuses on the relationship between feminist fiction writers and social change in the Progressive Era in the United States, to the environment. She focuses on contrasting visions of idealized environment offered in the early 20th-century utopian works of authors Charlotte Perkins Gilman and Mary Austin, which Harlow explains as radical representations of conservationist and preservationist mindsets—the difference between perfectly optimizing natural resources through intensive management and living in total harmony with nature through minimal disturbance of wilderness. The work of these women, and other writers like them, helped explore the foundational ideas and ideals of the environmental movement. 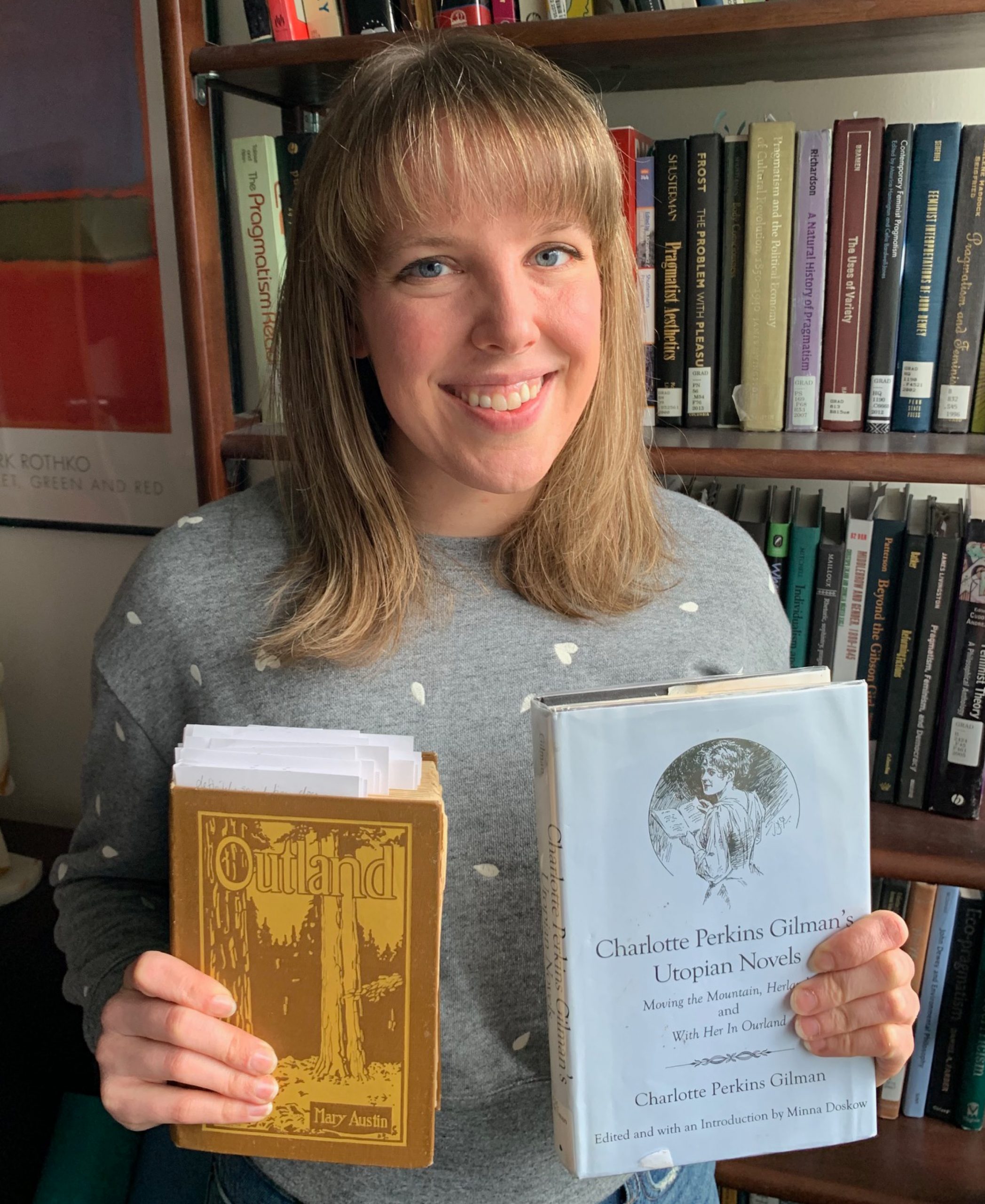 As part of her dissertation research, Harlow looks at how Progressive Era feminist authors envisioned society’s relationship with the environment.

“The birth of the modern environmental movement in the U.S. often gets pegged to the mid-20th-century, but I was interested in going farther back,” Harlow says. “And while people will talk about Teddy Roosevelt and the creation of the national park system, the role of women in exploring and developing socio-environmental ideas often gets forgotten in that longer history. I want to bring that to the forefront.”

Harlow isn’t looking to change anyone’s minds about the importance of the environment through either project. Recent polls from the Pew Research Center and the Washington Post show a large majority of Americans already believe that the environment is important and needs to be better protected. She is, however, hoping to help people who already understand its importance to come away with a greater awareness of where the movement has been, where it is today, and where it can go tomorrow.

“I think it’s easy to look back at the history of environmentalism in this country and say something simple, like ‘people came together and worked collectively,’ but these stories make that history tangible,” she says. “They’re a reminder of how far we’ve come, and of the long, hard work of a lot of people that goes back not just fifty years, but to the turn of the century. They’re also a reminder that collective action continues to be both powerful and necessary in the ongoing process of building the kind of world we’d like to live in.”

In addition to her Rackham Public Scholarship Grant, Harlow is an alumna of both the Rackham Mellon Public Humanities Fellowship program and the Institute for Social Change, which she says helped get her started on public scholarship work. She also recently completed the Rackham Professional Development DEI Certificate program.

“I am so grateful for Rackham,” Harlow says. “I’ve found so much help and support there, from improving my public scholarship research and writing to becoming better informed and capable of thoughtful engagement with community partners.”

For more on Harlow’s series, visit the Ecology Center.